Many of us see trains most often from station platforms, which offer many captivating, and accessible, spotting and photo opportunities!

If there is a “home away from home” for the railroad enthusiast, it is arguably the railroad station platform. Whether in a major city terminal bustling with people and nearly countless trains or a quiet rural depot that hosts an occasional local or freight, the station platform can be both familiar and captivating. Just as often, it is an easily accessible and comfortable place to enjoy our shared avocation.

Surely for as long as steel wheels have rolled on steel rails, the station platform has been home to avid trainspotters, who with notebooks, spotting guides, and timetables in hand record the passage of locomotives and consists both common and unusual. And the station platform is no less an enthralling place to practice and enjoy railroad photography.

While many stations, especially in busy city environs, have understandable access restrictions and requirements, many other platform locations remain a place, especially on a pleasant day, to linger and watch the world (which is to say, watch trains) come and go. Of course, it is also the station platform where, with ticket in hand, we as railfans begin our own rail travels, whether the trip is to be a short commute or a memorable long-distance holiday journey.

For the railroad photographer, the station platform offers a superb opportunity to capture trains in one of their most compelling settings, ranging from the sprawling and towering environs of a big-city terminal or the quaint and bucolic setting of a branch line depot. And along with the trains themselves, photography from platforms presents fine opportunities to include other elements – signals, bustling passengers, station architecture, et al. – in the scene.

Thoughts of time spent on a platform naturally first evoke images of passenger stations calling to serve travelers, but along many routes a visit to stations and platforms equally promises the train-watcher the dramatic and pounding passage of freight trains.

The station platform (like all locations) is also a place to practice one’s best railfan etiquette. For your personal safety and to ensure future visiting enthusiasts will be welcomed, obey the posted rules, and follow any instructions or requests that staff may provide.

In We Are Railfans’ extraordinary “We Are Many” video, narrator Sean Bean speaks of “a place to share our passion,” and most certainly the railroad station platform can be just such a magical and memorable place! – Gary Dolzall

In the time-honored tradition of trainspotting, a pair of enthusiasts stand at the end of the Inverness (Scotland) wooden platform and record the arrival of the 10:12 a.m. from Aberdeen, with British Rail Class 27 036 providing the power on an overcast morning in September 1981. 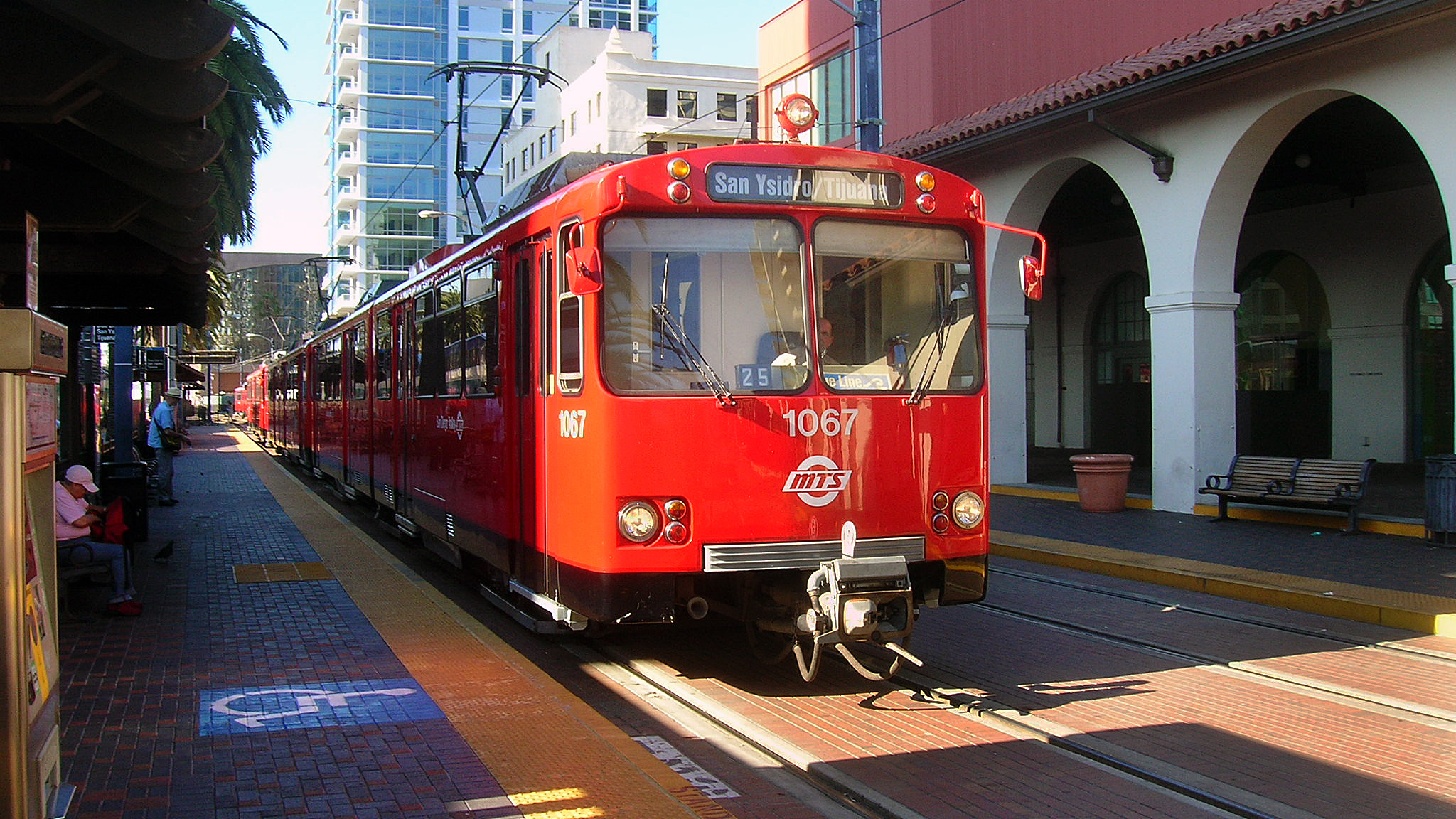 The variety of rail-born creations to be discovered and enjoyed along station platforms around the world is nearly endless. At San Diego, California’s famed Santa Fe Station, a San Diego trolley of the Metropolitan Transit System (MTS) makes its stop, with a final destination of San Ysidro on the U.S.-Mexico border. Served also by Amtrak and Coaster, and host to occasional BNSF freights, San Diego’s Santa Fe Station is an extraordinary place to watch trains. 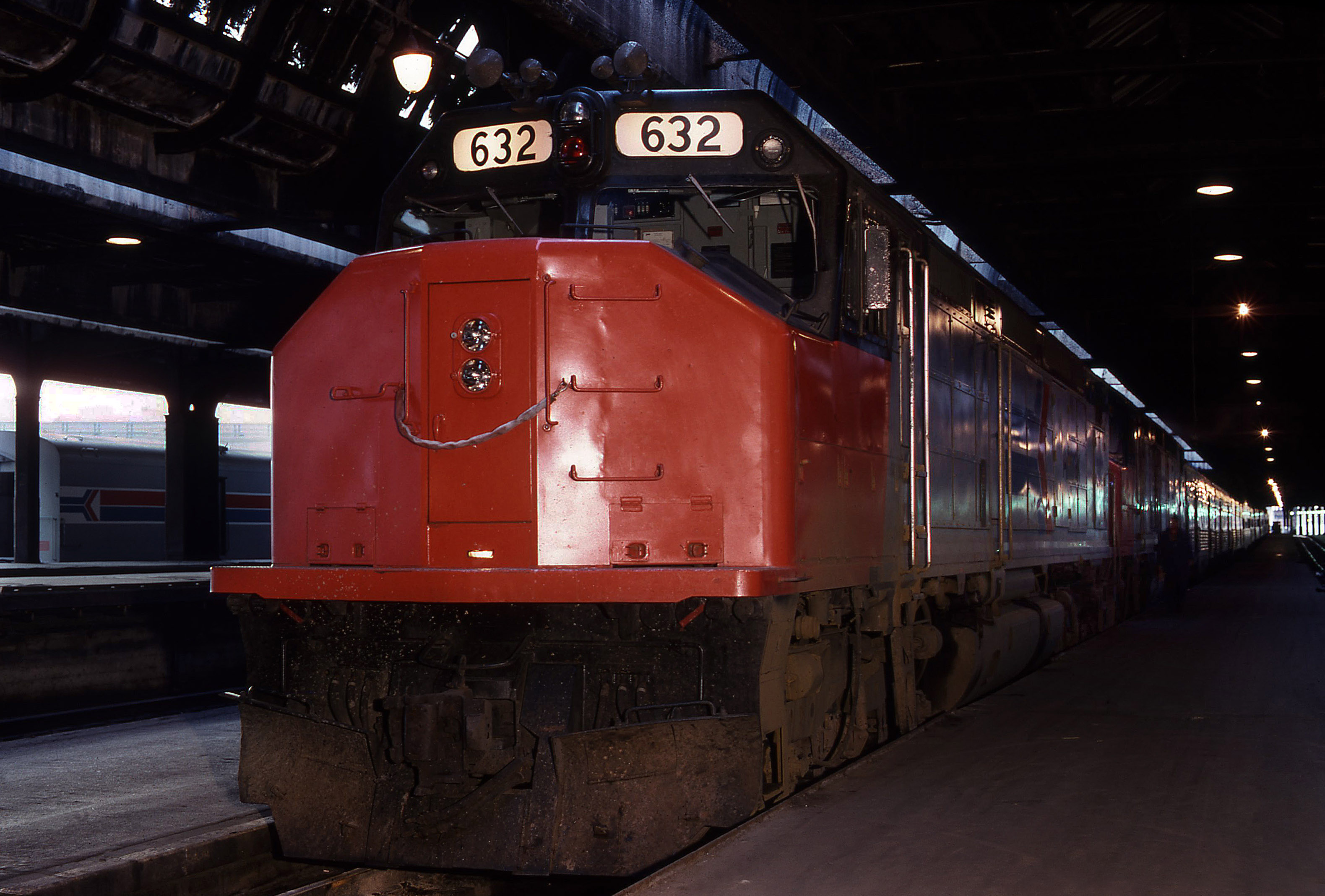 Wherever they may be found, great city stations offer captivating sights. Eased to a stop along a platform at Chicago Union Station, Amtrak EMD SDP40F 632 looks remarkably fresh for having just completed a 1,500-mile journey from Miami with the Amtrak Floridian in 1975 (above). Some 3,600 miles distant from Chicago, the scene is far different but every bit as compelling in 2008 as a Iarnród Éireann Intercity train bound for Tralee readies to depart Dublin’s classic Heuston railway station (below). 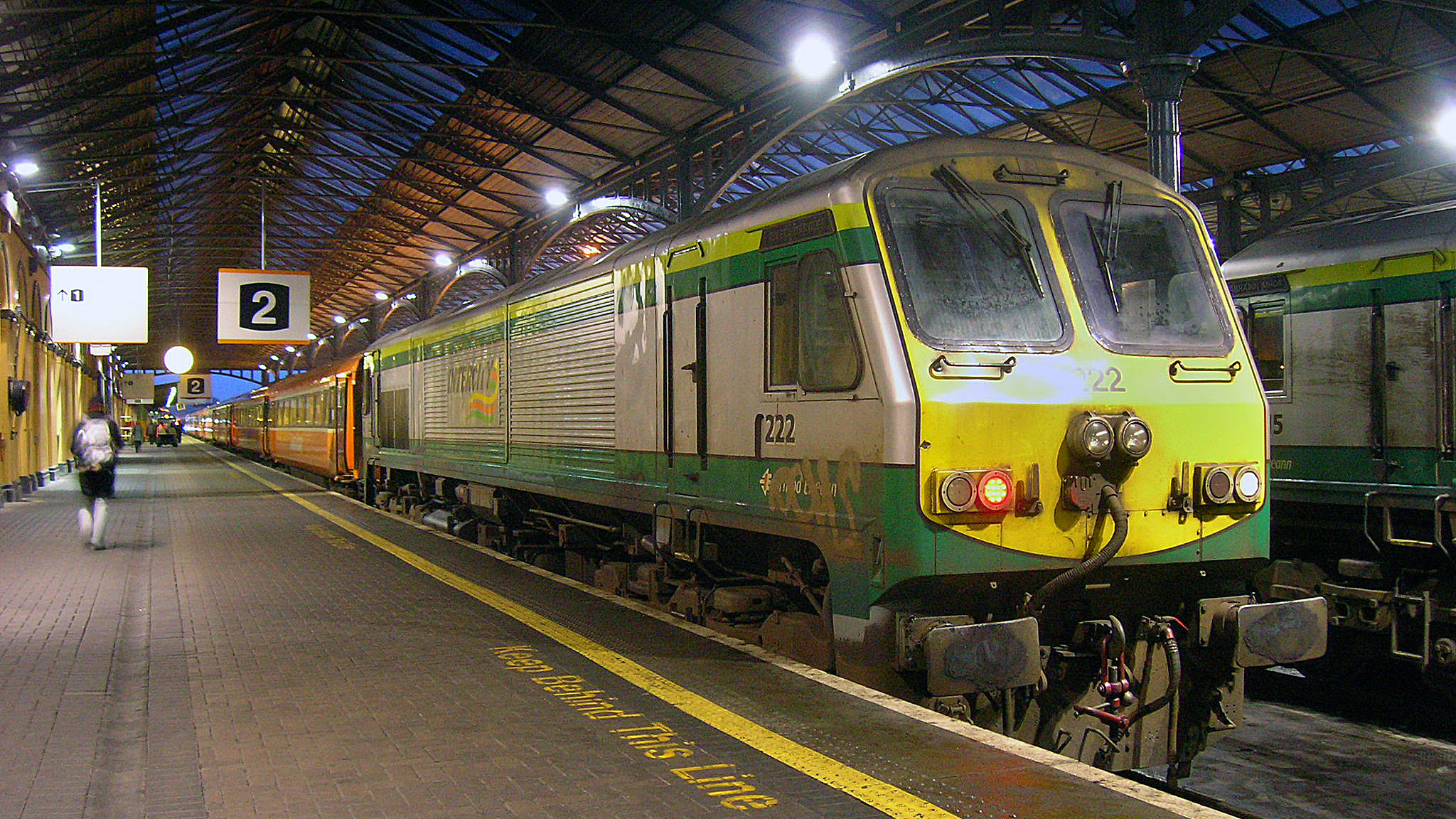 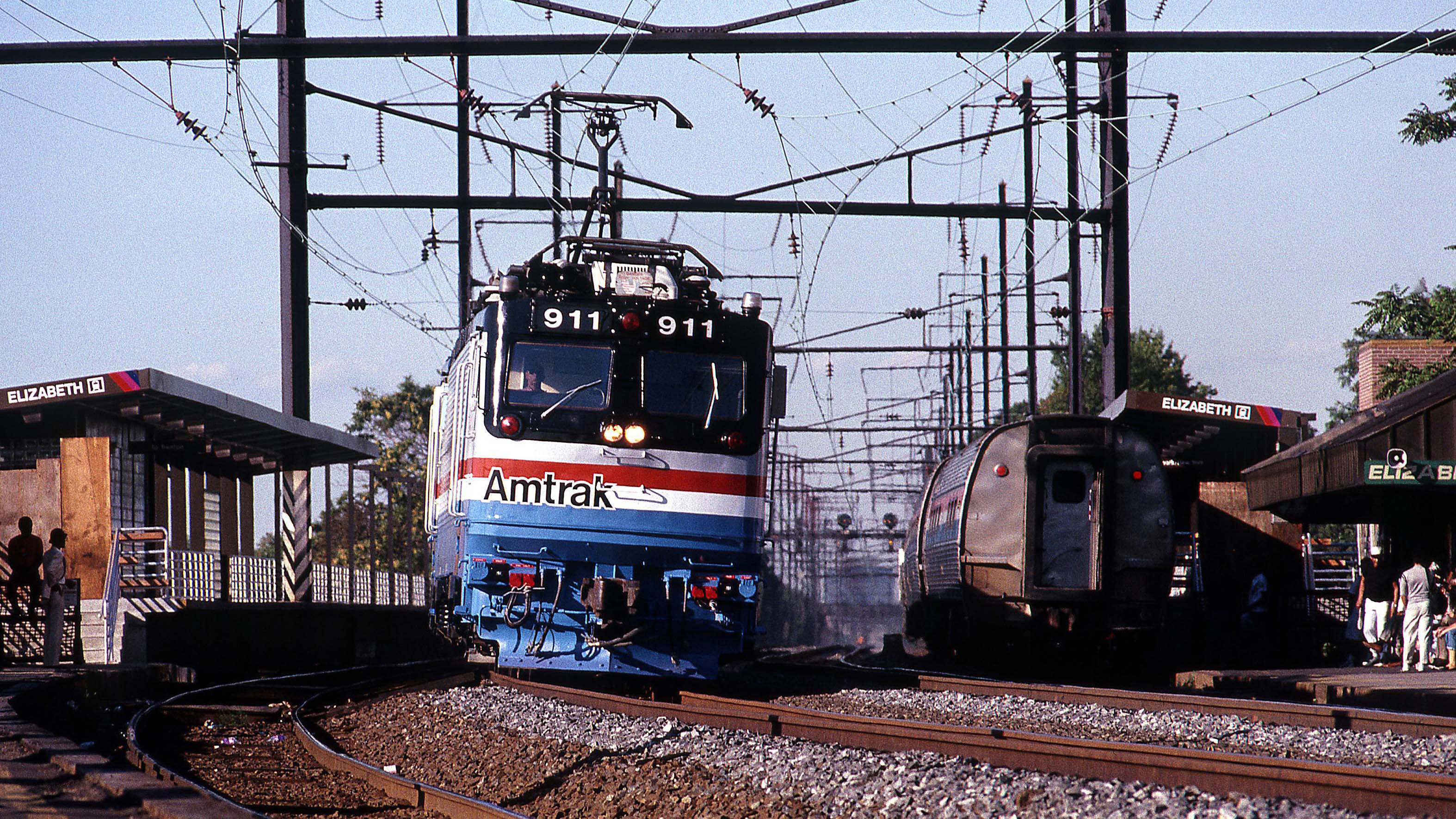 In scenes captured two decades apart from platforms along the bustling Amtrak Northeast Corridor, a pair of Amfleet-equipped trains powered by AEM-7 electrics meet at speed at Elizabeth, New Jersey, in August 1988 (above), while in 2009, veteran Amtrak AEM-7 946 eases its way through the maze of complex trackwork at Washington, D.C., Union Station (below). 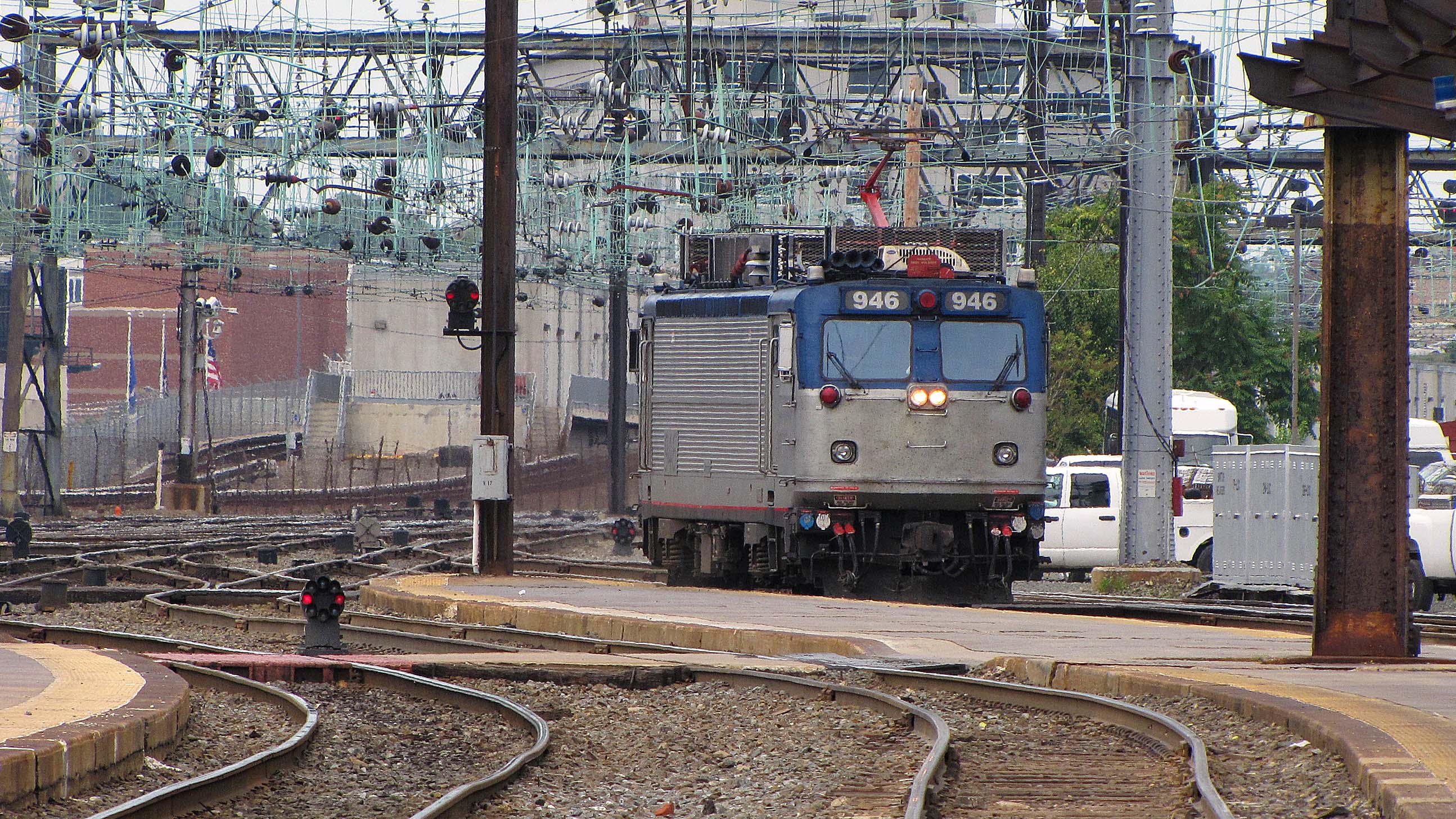 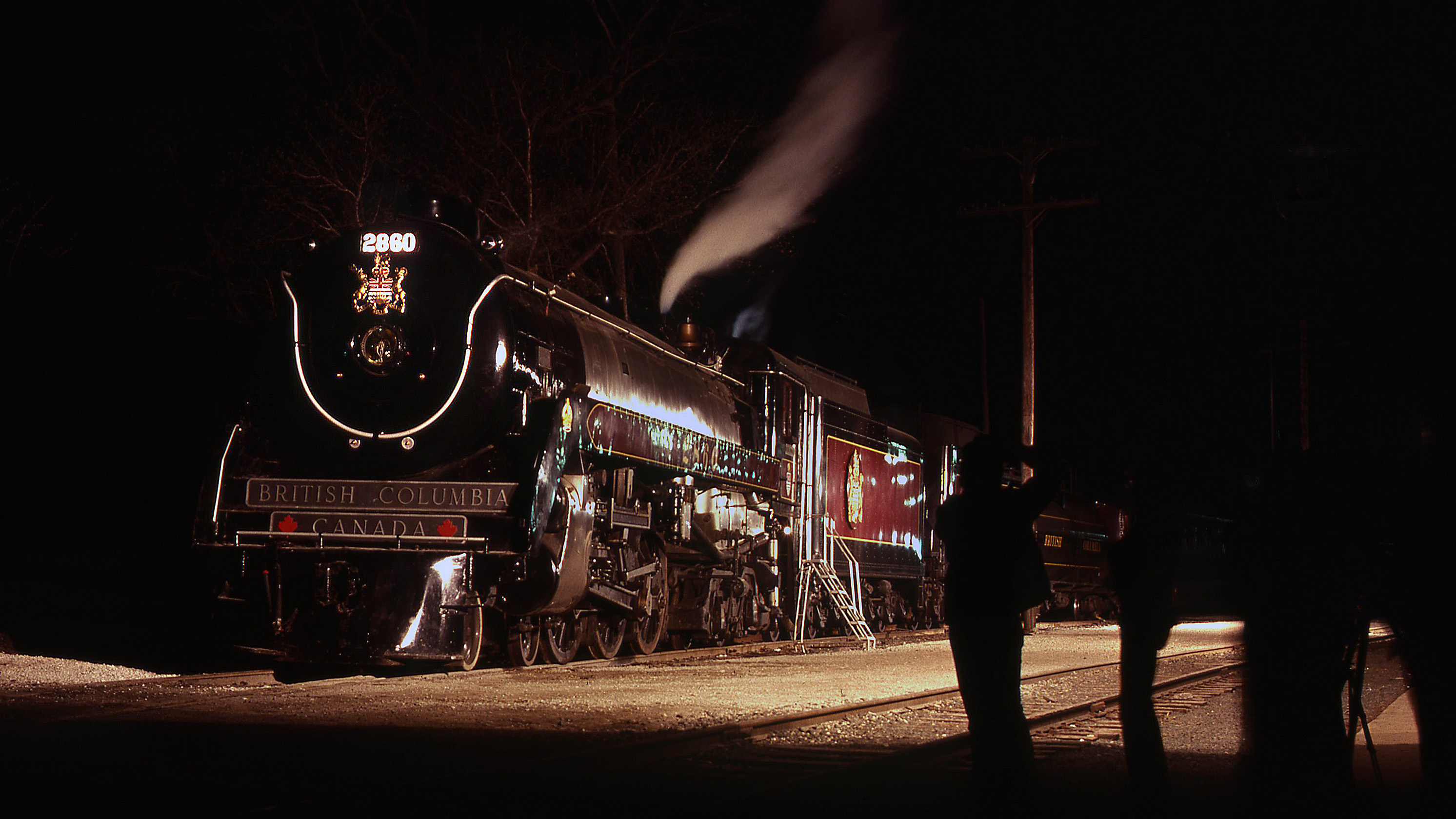 Railfans with cameras and tripods gather along the platform of the Soo Line in Waukesha, Wisconsin, on a chilly spring night to experience and capture the majesty of Canadian Pacific Railway “Royal Hudson” 2860 during the beautiful 4-6-4’s 1978 tour of the United States. 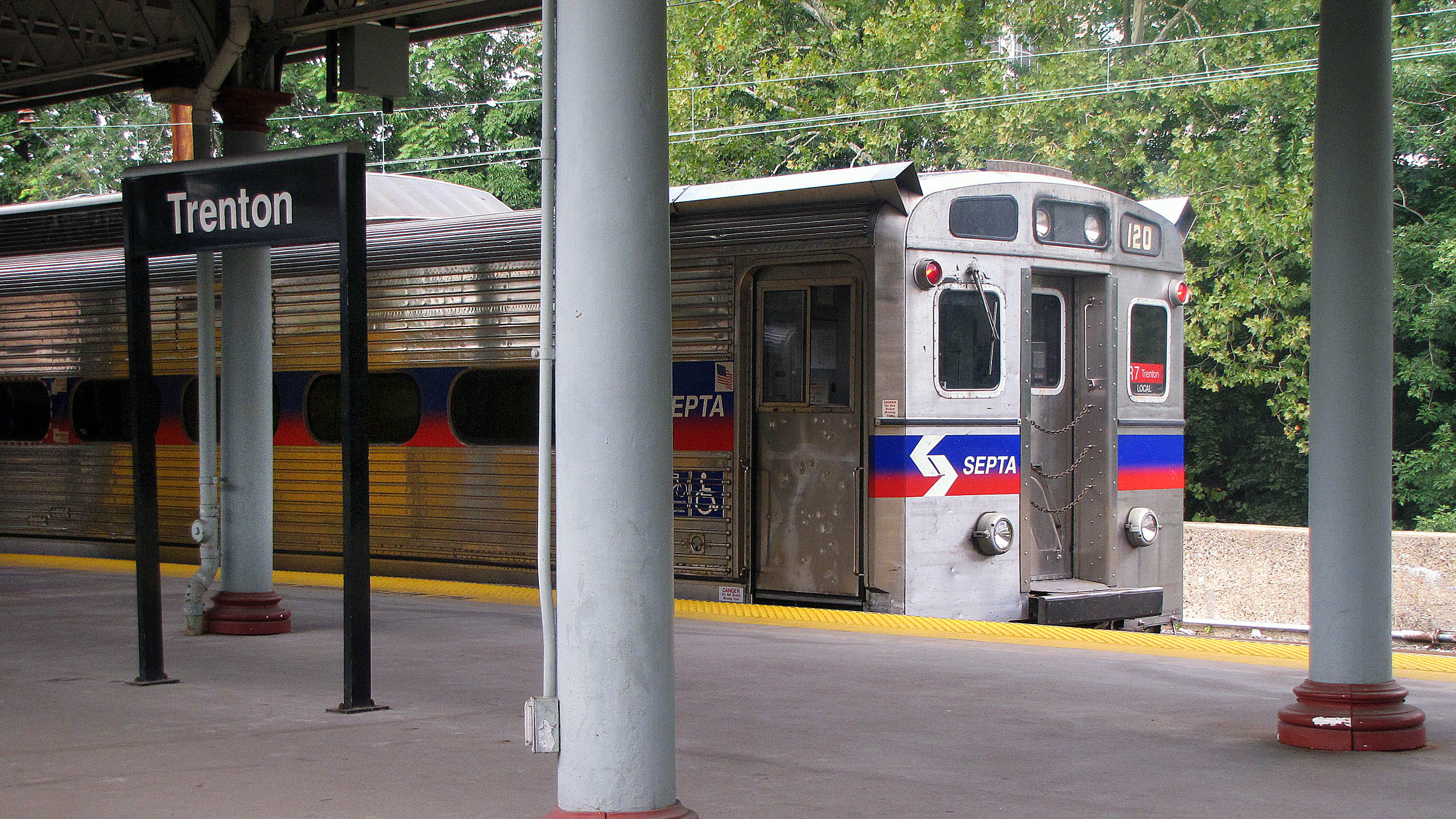 Framed between pillars on the platform of the Trenton (New Jersey) Transit Center, SEPTA Silverliner EMU 120 awaits its next call to usher commuters to and from work. Trenton, located along the Northeast Corridor, is served by SEPTA, NJ Transit, and Amtrak. 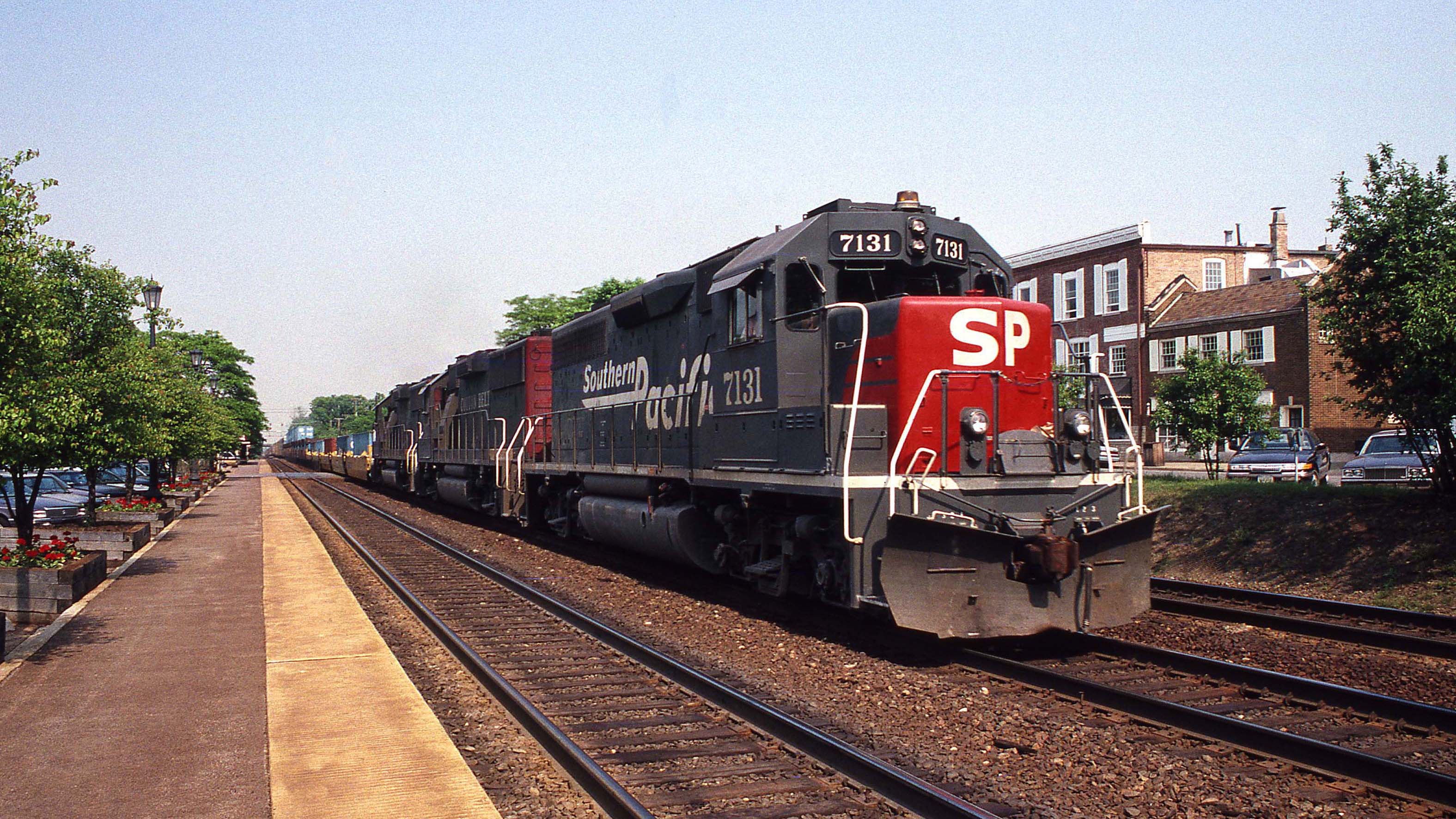 While stations and platform vantage points may first evoke thoughts of passenger and commuter trains, many are the platforms that deliver a ringside seat for bustling freight operations. A trio of Southern Pacific diesels led by EMD GP40 7131 are highballing priority stacks down the center track of BNSF’s famed Chicago “Racetrack” at Hinsdale, Illinois. 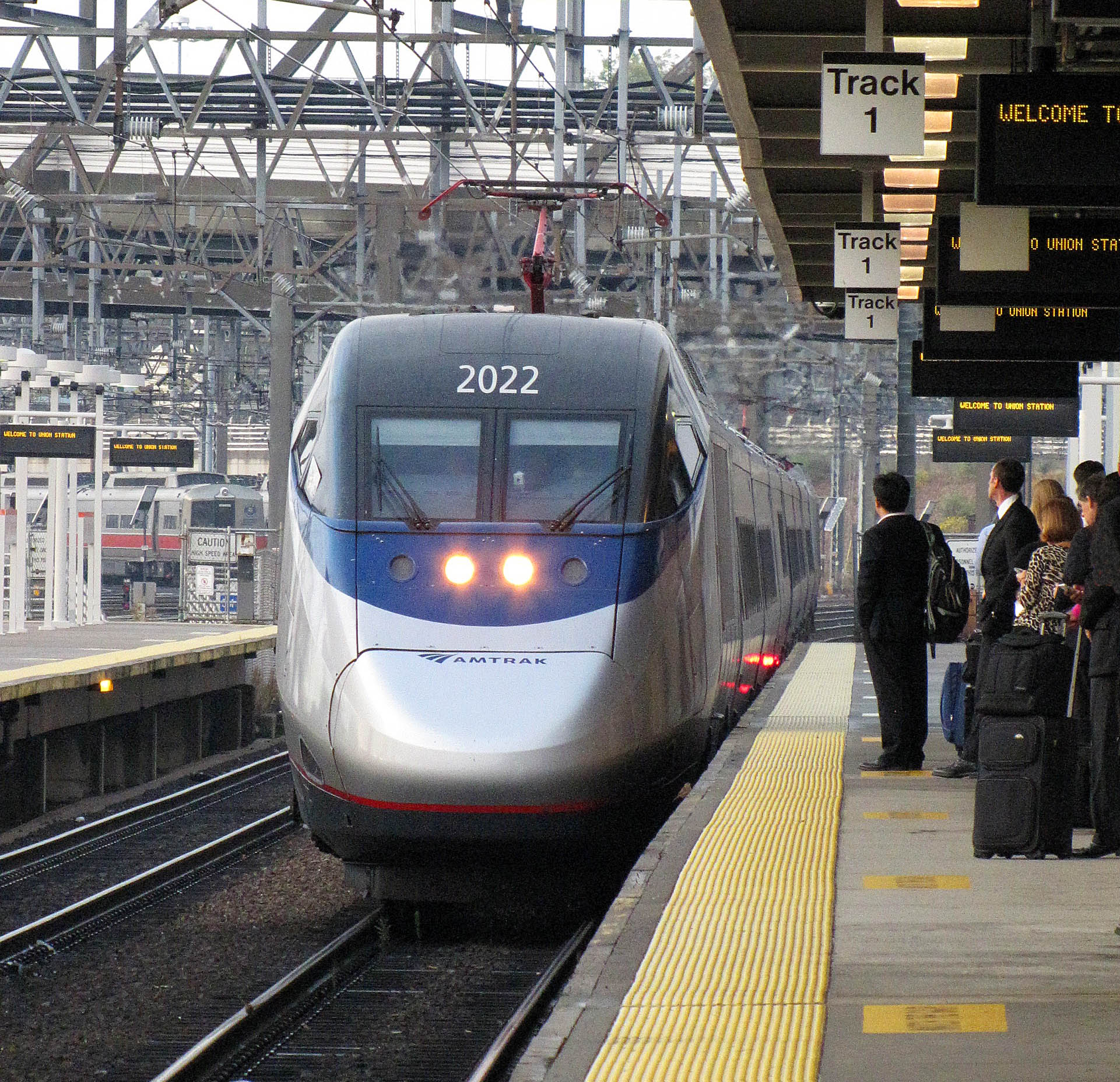 Train time on Track 1: Bound for Boston, Amtrak Acela 2022 glides to a stop to board business travelers at New Haven Union Station. From busy city terminals to rural depots, the experience of train watching from trackside stations and platforms promises to be memorable. 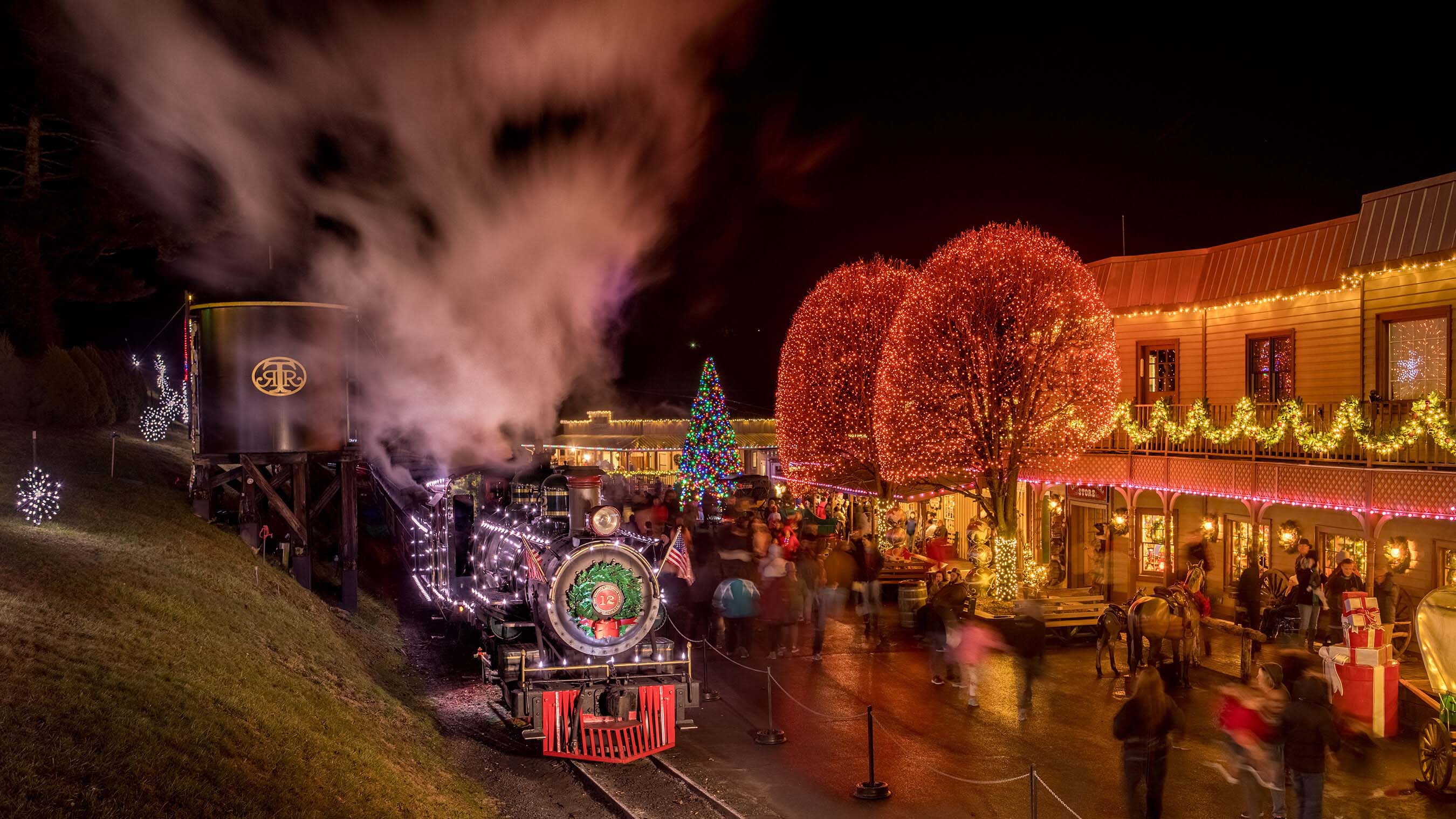 A Railfan Christmas! Festive trains near you.

Find out where your nearest operating festive railroad is this Christmas! 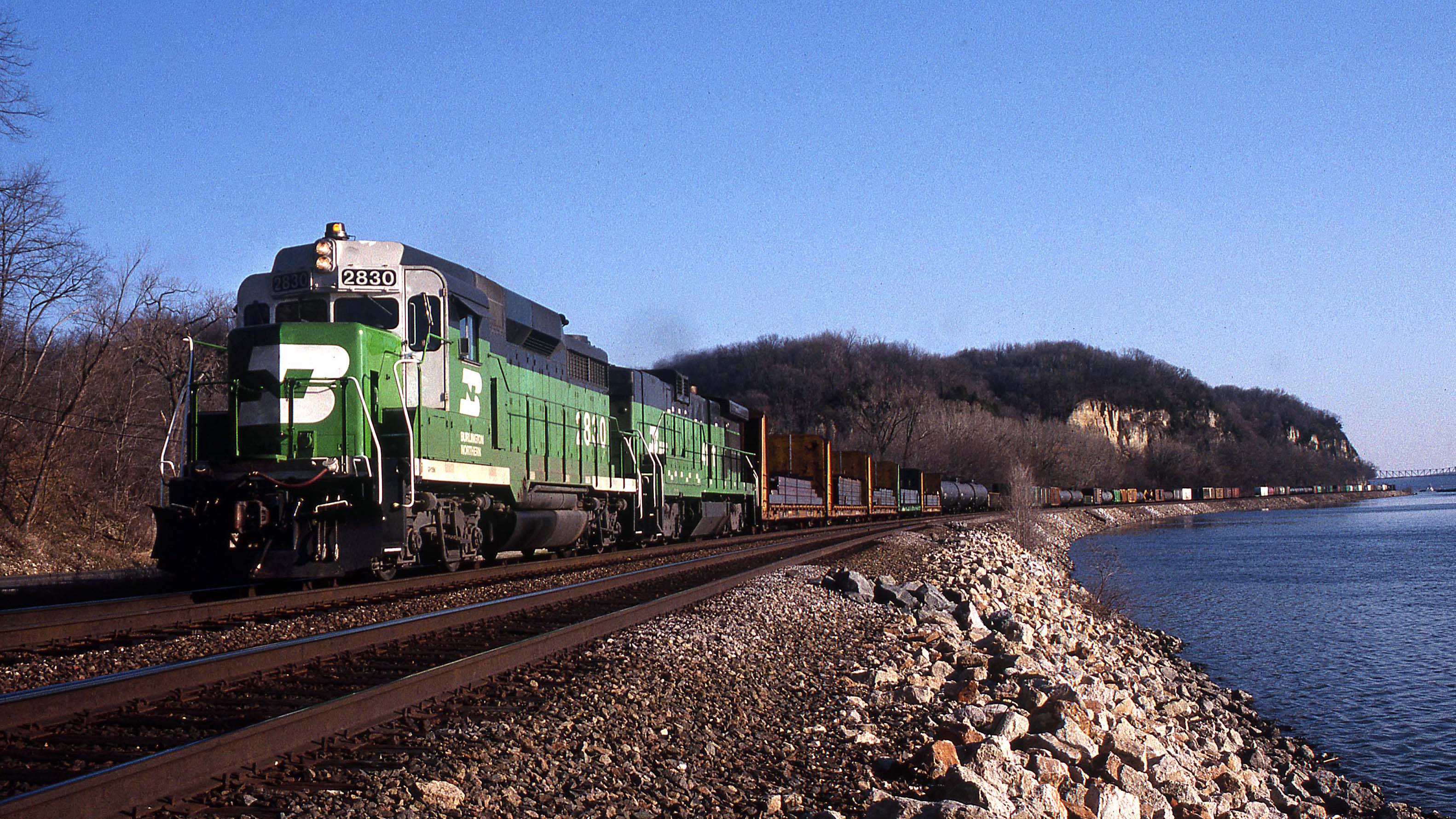 The early 1960s spawned a menagerie of fascinating diesel locomotives in North America, and among the most captivating was the stylish Electro-Motive GP30. 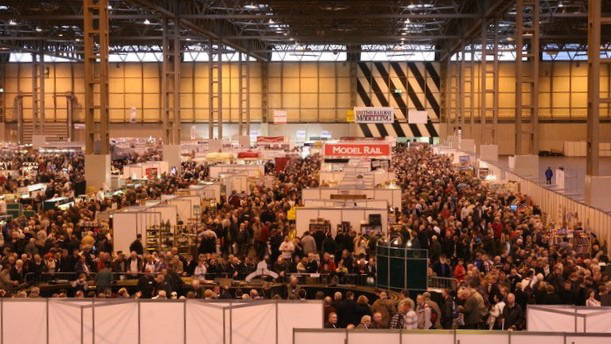 The Warley Show goes virtual for 2020 on 28th & 29th November. We take a look at what has made it arguably the world's biggest model railway show.