The author journeys to Southern California and discovers Amtrak’s Pacific Surfliners as well as Coaster and Metrolink commuter trains in the hands of new-generation motive power.

For the train-watcher, change to the familiar and comfortable in the railroading scene is at times almost imperceptible. But there are other times when the familiar is seemingly turned on its ear. A case of the latter recently occurred when it comes to passenger and commuter railroading in the far southern reaches of California. San Diego, known for its beautiful setting along the Pacific; its captivating Little Italy, Coronado, Old Town, and Gas Lamp districts; and its nearly immaculate weather (“today will be 72 degrees and sunny” is the regular forecast), is a siren to sun and fun lovers, and it is also a wonderful destination for the train-watcher. For my wife and me, it has been a frequent getaway destination (despite being 3,000 miles from our New England home) – at least until the pandemic put a temporary hold on such travels.

The railroad scene in those pre-pandemic years promised the familiar and compelling sights of Amtrak’s Pacific Surfliners powered by tall blue-and-silver Electro-Motive F59PHI diesels mixing with the veteran Morrison-Knudsen-built F40PHM-2C and newer EMD F59PHI diesels of San Diego’s commuter railroad, Coaster. And if one should venture a little north from San Diego, along the Pacific to Oceanside (southern end of commuter service operated by Los Angeles’ Metrolink Orange Line) or beyond to the likes of San Clemente or San Juan Capistrano, one might also sample similar Metro-Link third-generation Electro-Motive power (as well as rakish MPI MP36PH-3Cs). With Amtrak, Coaster, and Metrolink power all dating from the mid-1990s and early 2000s, the familiarity of the area’s railroad scene had, in fact, been in place for two decades.

My last pre-pandemic San Diego visit was in 2018 and, from a railroading sense, status quo reigned except for the occasional appearance of Amtrak’s otherwise ubiquitous General Electric P42DC diesels powering either bi-level equipment or single-level coaches and ex-F40PH unpowered “cabbage cars” to supplement the dedicated Pacific Surfliner equipment. But now, let’s fast forward to a recent visit in September 2022, and the realization that much has changed. Amtrak’s blue-and-silver F59PHIs began being replaced only shortly after my 2018 visit by the strikingly different Siemens SC-44 Charger locomotive, California’s examples of which wear Surfliner liveries and 2100-series road numbers (you need not fret for the ex-Amtrak Surfliner F59PHIs, which have moved on to a second career working for Chicago commuter rail giant Metra). Coaster’s five M-K constructed F40PHM-2Cs, which had been on hand since the commuter railroad’s service inauguration in 1995, were similarly replaced by a like number of Siemens SC-44 Charger locomotives in 2021. Happily, the entire Coaster fleet of veteran F40s appears to be museum-bound, with No. 2013 already on site at the Pacific Southwest Railway Museum in Campo, Calif. Coaster’s aging pair of EMD F59PHIs (built in 2001), which were temporarily stored during the pandemic era’s reduction of services, returned to duty in 2022, but are earmarked for retirement upon the arrival of additional Coaster SC-44s.

Farther north, in Metrolink territory, a similar transition occurred, as the LA commuter carrier’s EMD F59PH and F59PHI locomotives have now been almost entirely displaced by burly and multi-colored Electro-Motive F125 “Spirit” diesels, of which Metrolink operates 40 examples built in 2016-2017. Thus, my most recent visit to San Diego and environs resulted in that unique mixture of excitement for the new and a twinge of sadness that “old friends” were no longer on hand. It is, of course, a dichotomy of feelings all train-watchers experience through the years. But certainly, I have no complaints – the SC-44s are sleek, stylish, and bring the distinctive sounds of big Cummins diesels to the ear; the EMD F125s are simply beasts to look at. Accordingly, the train-watching experience along the Pacific Coast remains one worthy of many visits in the years to come. 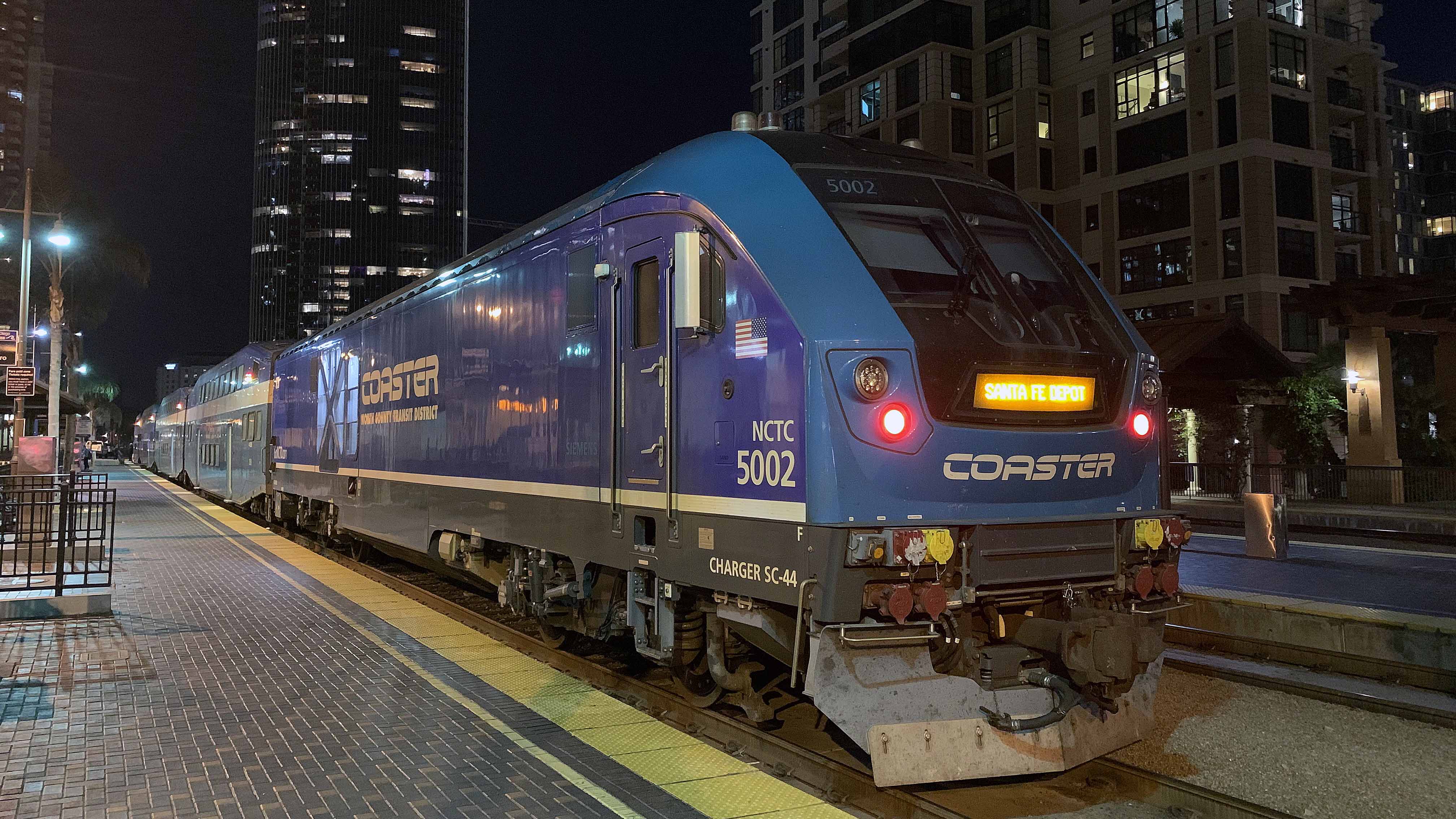 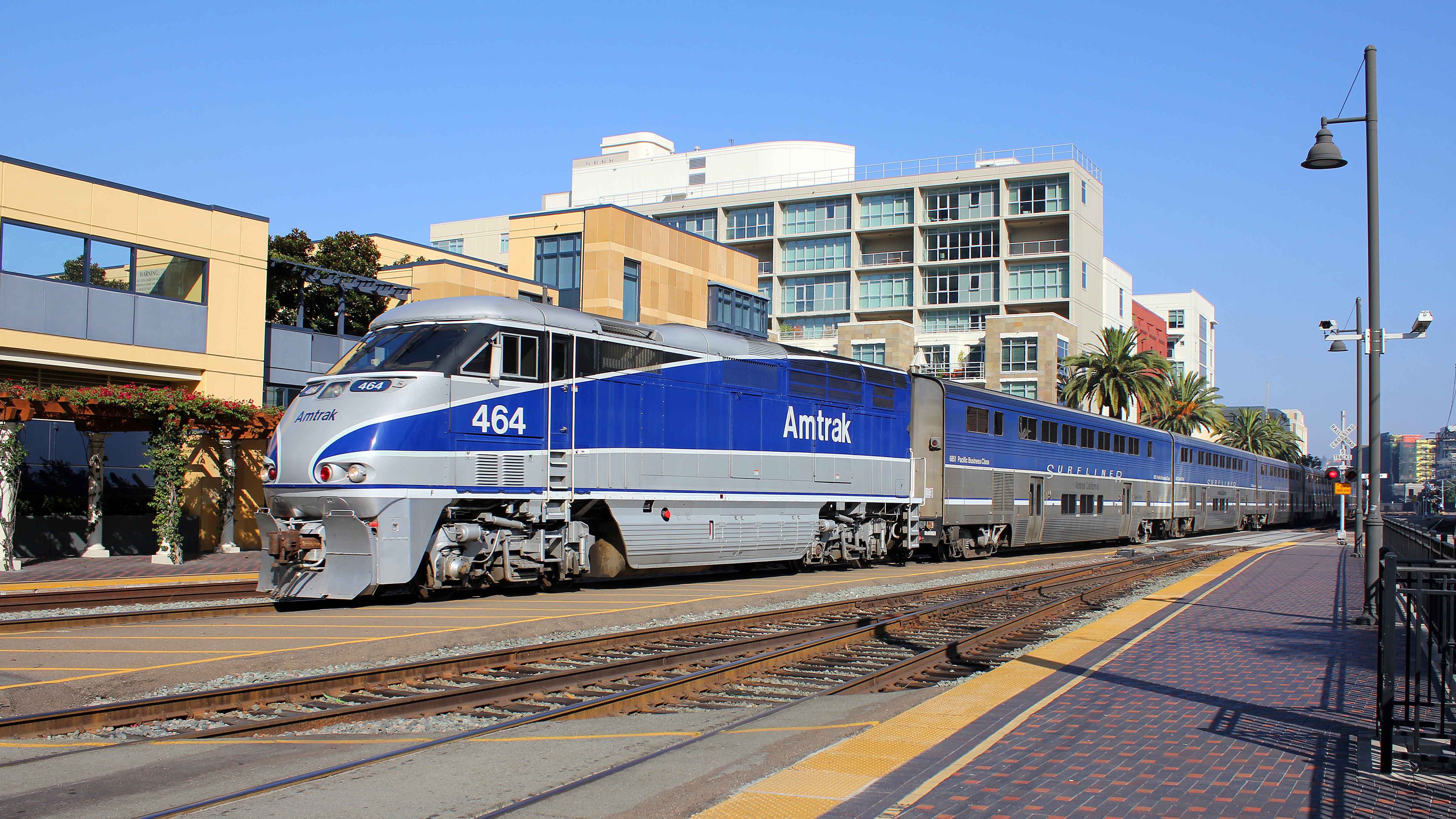 Before and after: In two scenes taken at CP Ash in San Diego, tall blue-and-silver Amtrak EMD F59PHI 464 leads the bi-level consist of a Surfliner into San Diego in 2013 (above), while in 2022, Amtrak Siemens SC-44 2117 is providing the power (below). 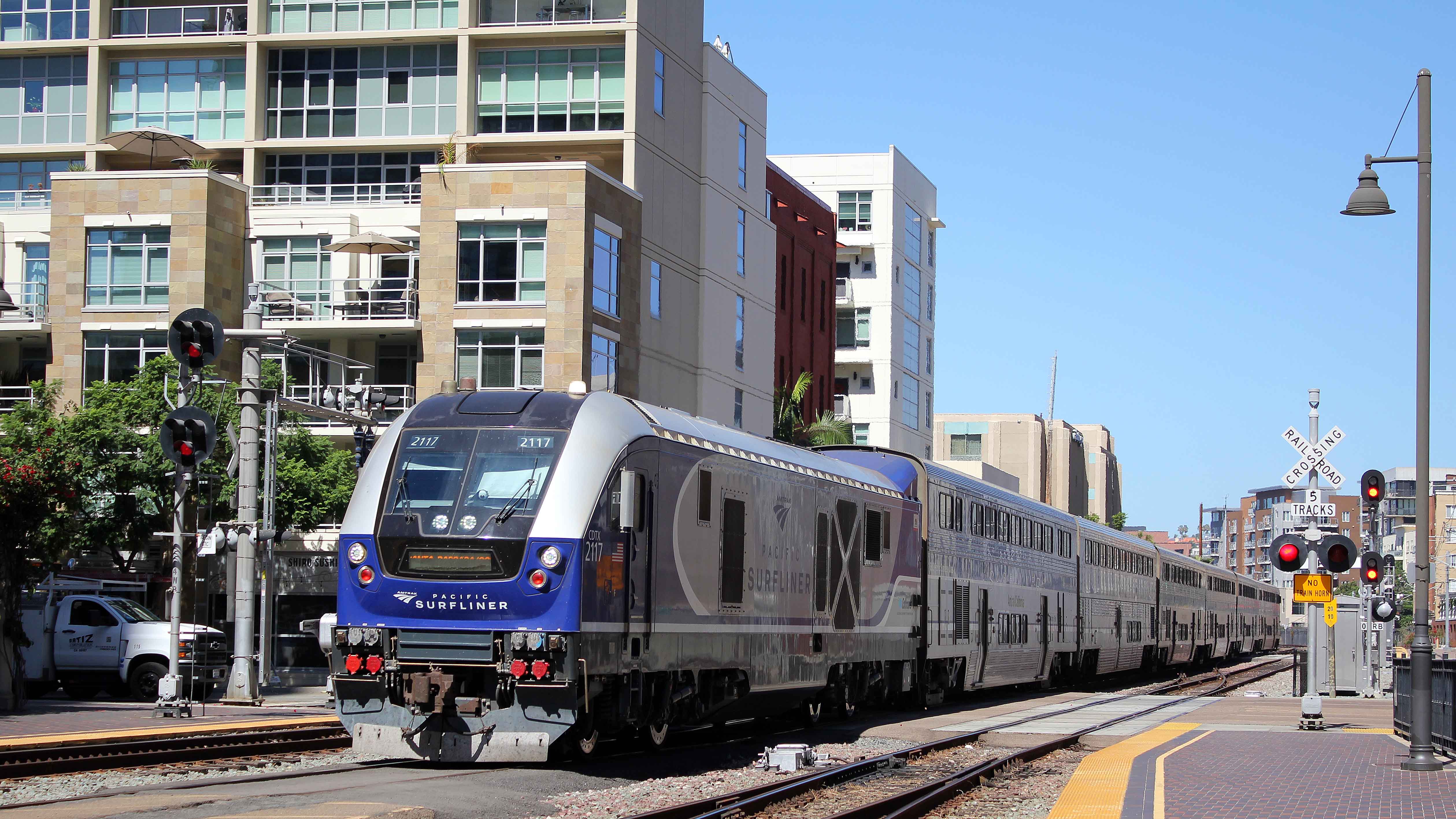 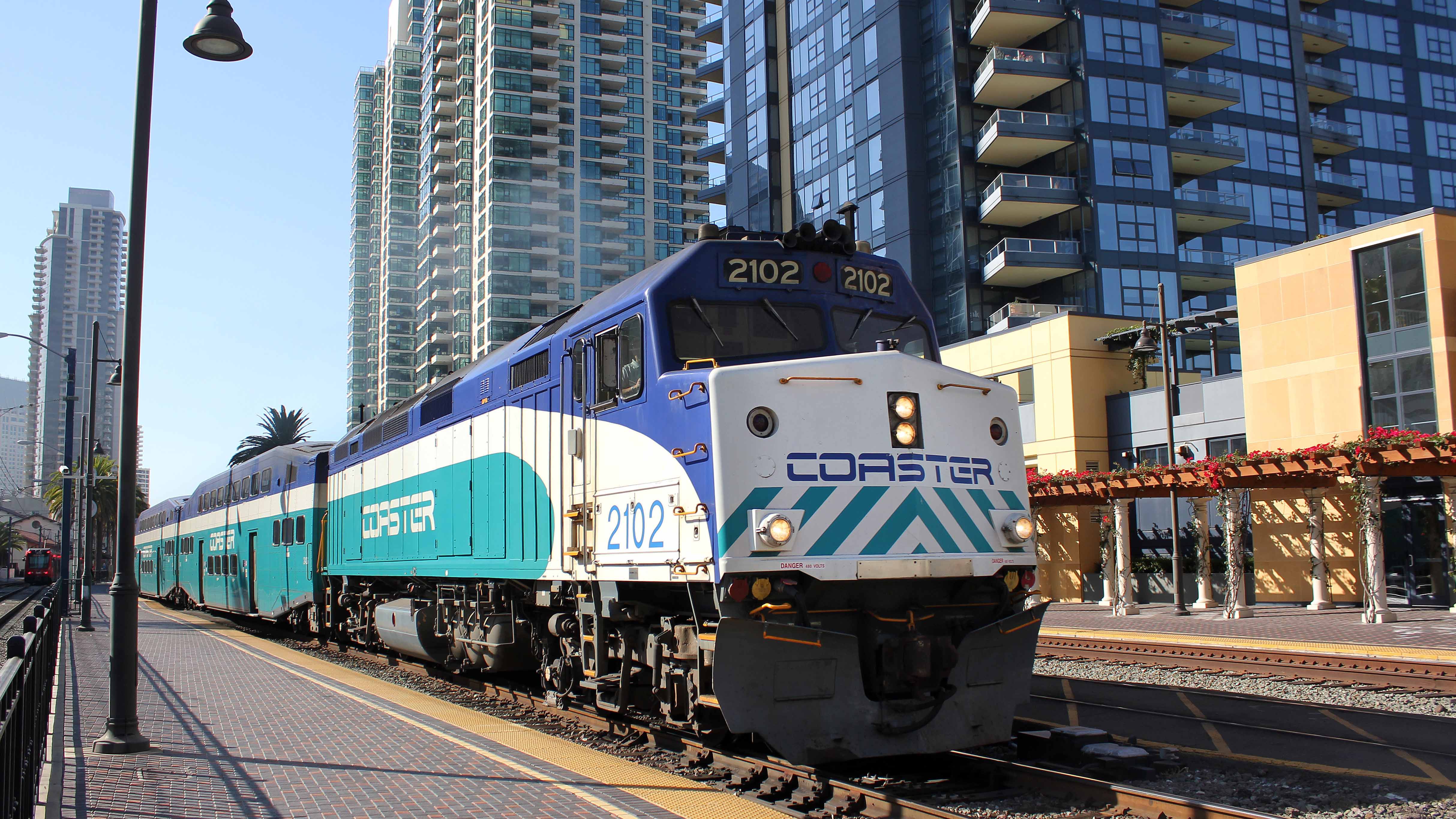 Typical of the railroad experience in far Southern California for nearly a decade and a half were sights such as Coaster F40PHM-2C 2102 departing San Diego (above) with a commuter train bound north for Oceanside, and Amtrak EMD F59PHI 454 sleeping away the night at San Diego’s Santa Fe station (below).

During the long tenure of Amtrak EMD F59PHIs dominating the Pacific Surfliners, the unexpected was provided by Amtrak’s otherwise ubiquitous General Electric P42DCs powering either bi-level cars or single-level coaches and ex-F40PH “cabbage cars.” As demand for services on the Surf Line grew, the dedicated Surfliner equipment was often supplemented with Superliners, Amfleet cars, and Horizon coaches. In 2017, the author encountered P42DC 174 tied to a mix of Surfliner and Superliner equipment at San Diego’s Santa Fe Depot (above) as it awaited its next run to Los Angeles, while in 2018, ex-F40PH “cabbage car” 90278 is leading north through San Diego Old Town (below). 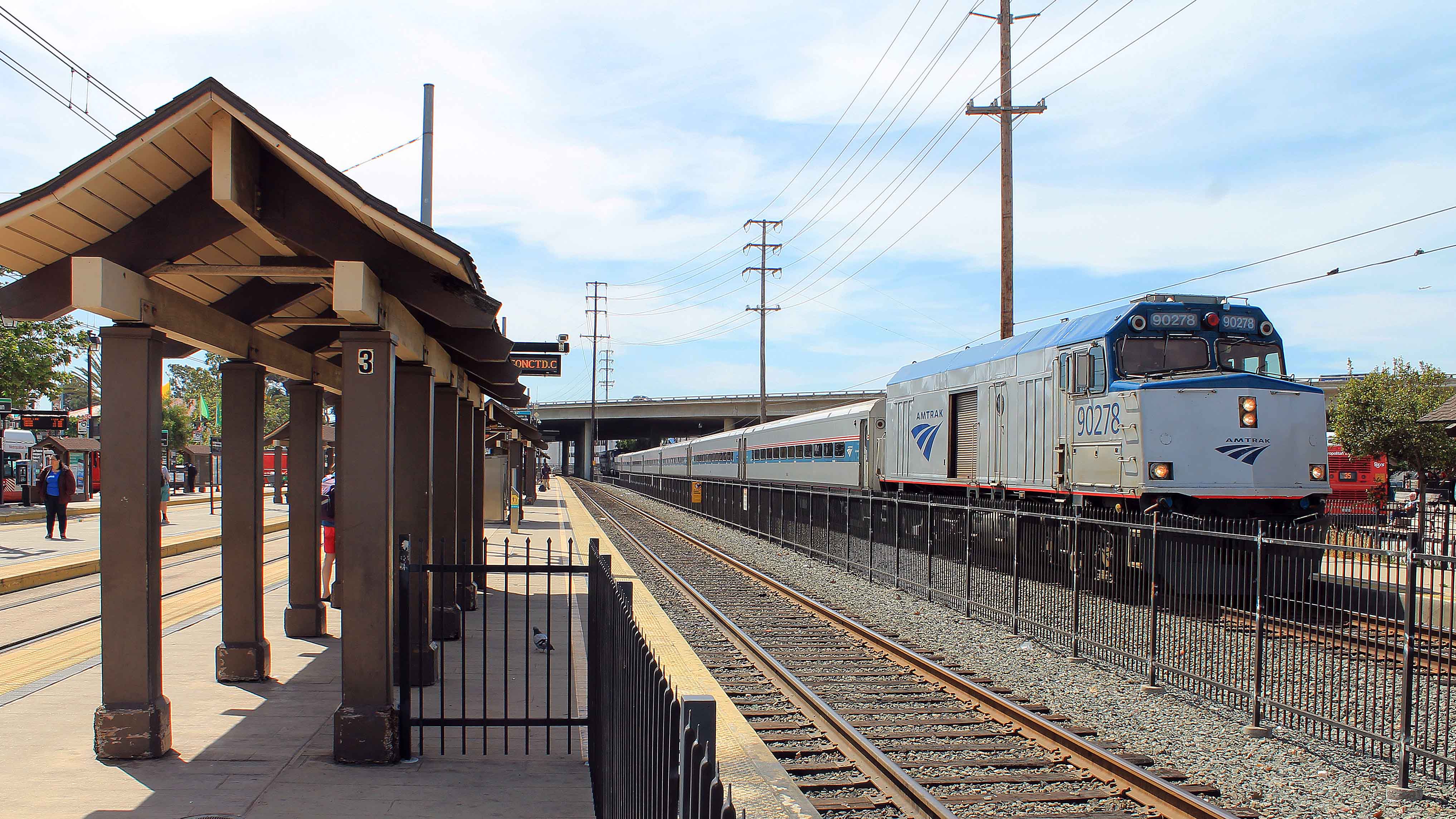 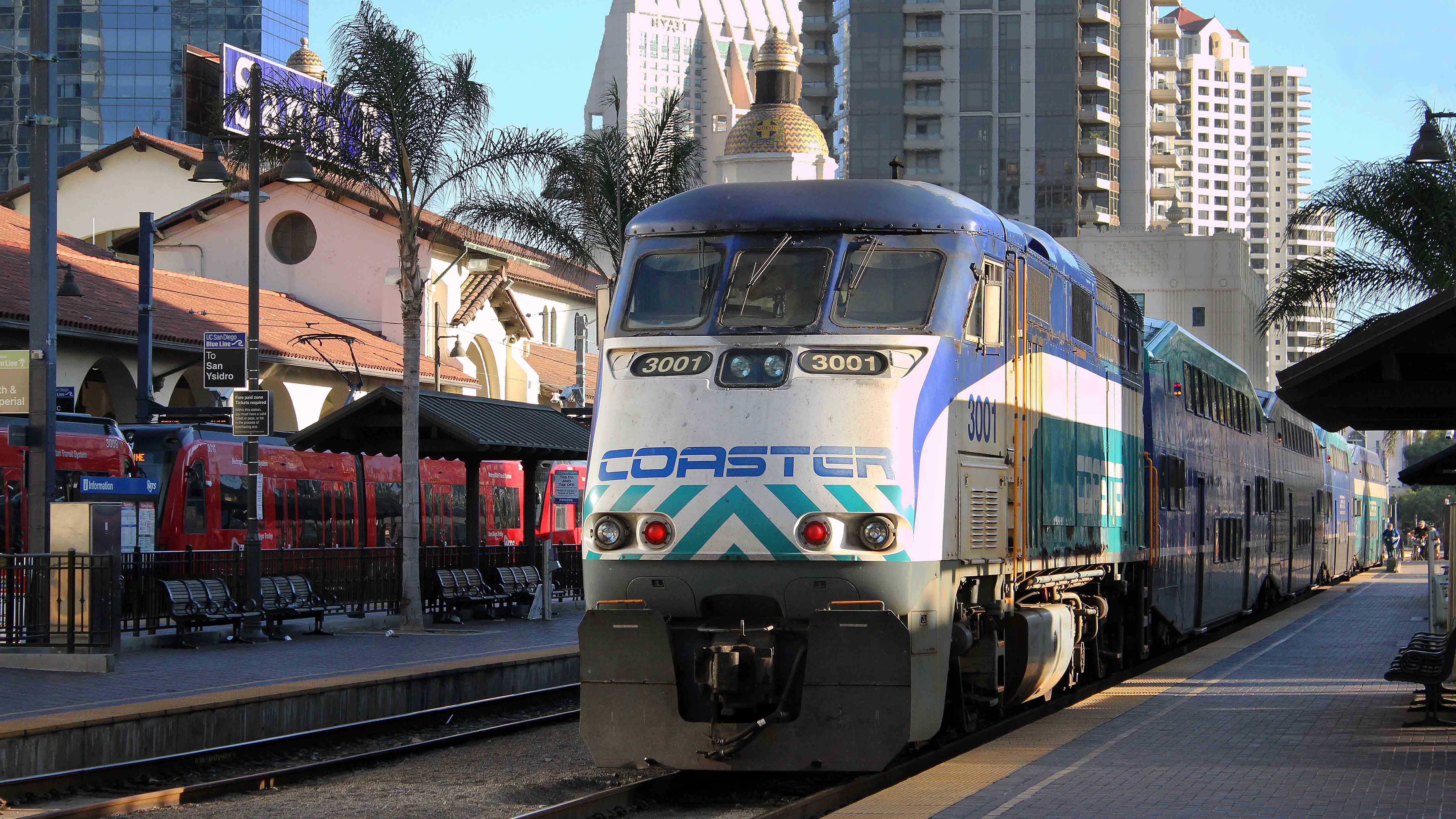 Veteran and newcomer: Still in service in September 2022, Coaster EMD F59PHI 3001 (above) has ably served for two decades but is earmarked for retirement when the commuter railroad receives a second group of SC-44 Chargers. Fresh-faced Coaster 5002 (below) is one of five Siemens 4,400-horsepower Charger diesels the commuter railroad placed in service in 2021 to replace a like number of F40PHM-2Cs. Both photos are at San Diego’s magnificent Santa Fe Depot. 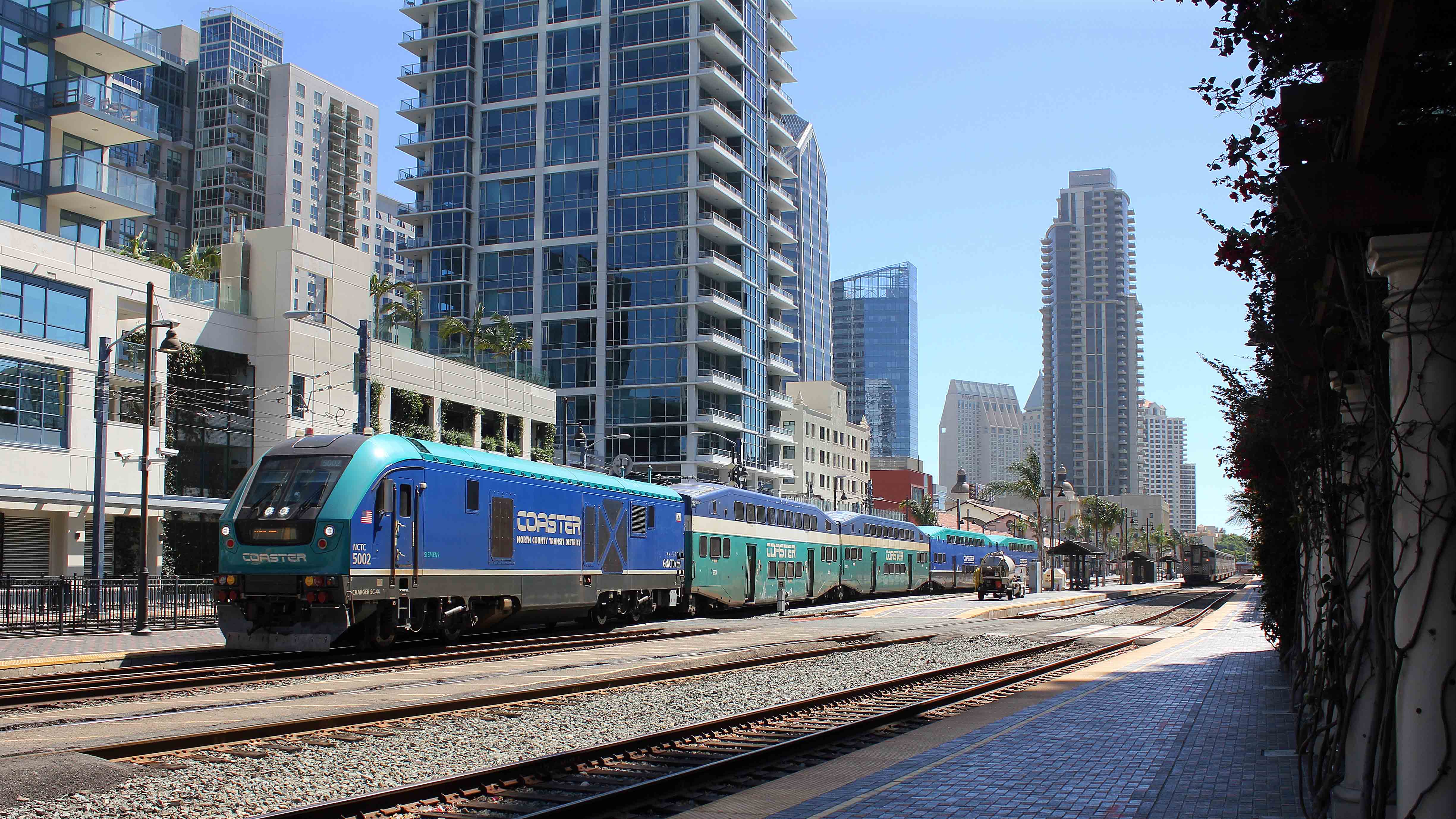 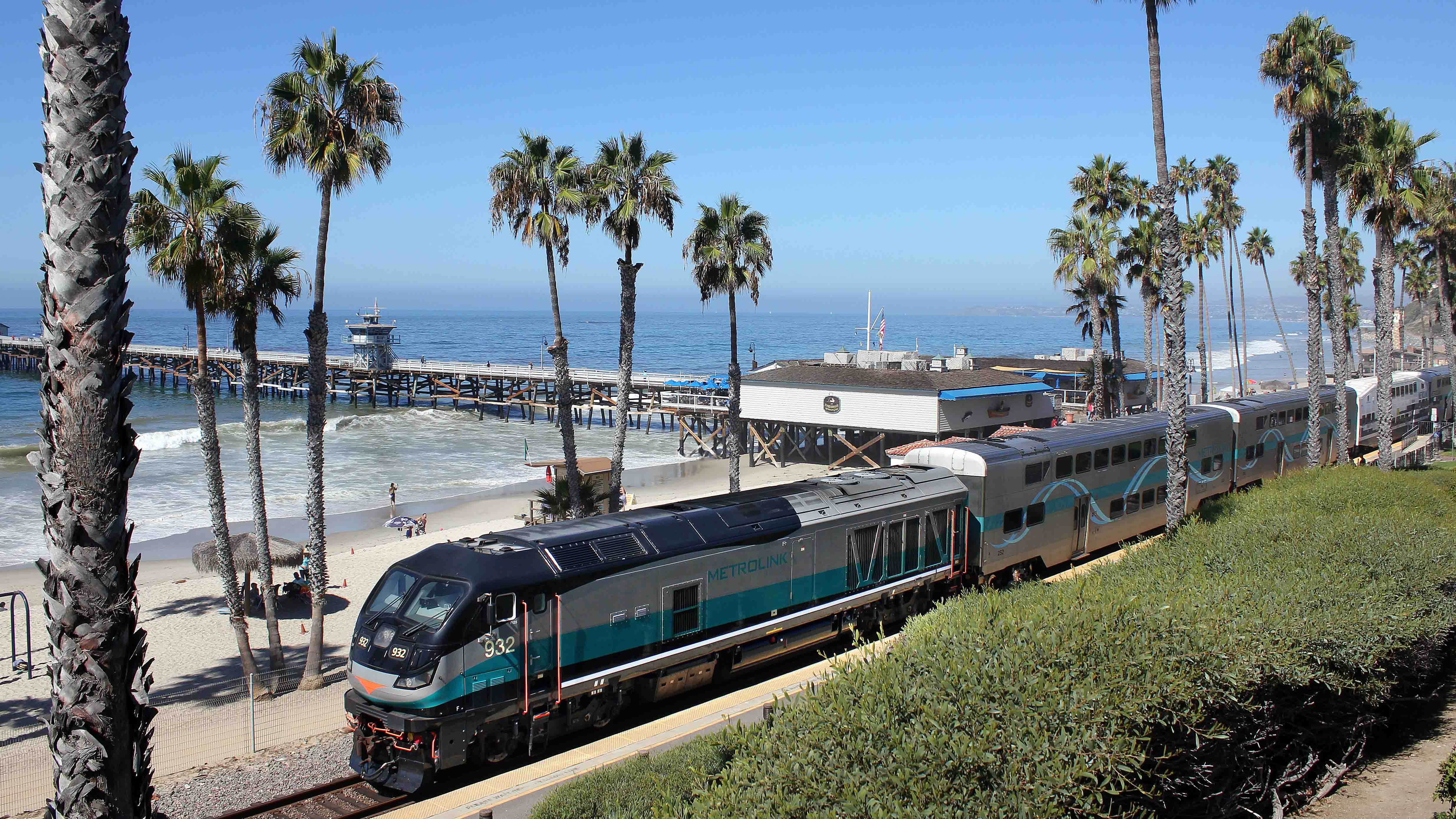 Heading south along the Pacific Coast on Metrolink’s Orange Line at scenic San Clemente Pier in September 2022, Electro-Motive F125 932 by all appearances is one beast of a locomotive. Powered by a 4,700-horsepower Caterpillar V-20 engine, the F125 made its debut in 2015 with Metrolink, Los Angeles’ commuter railroad, serving as launch customer and operating 40 examples. 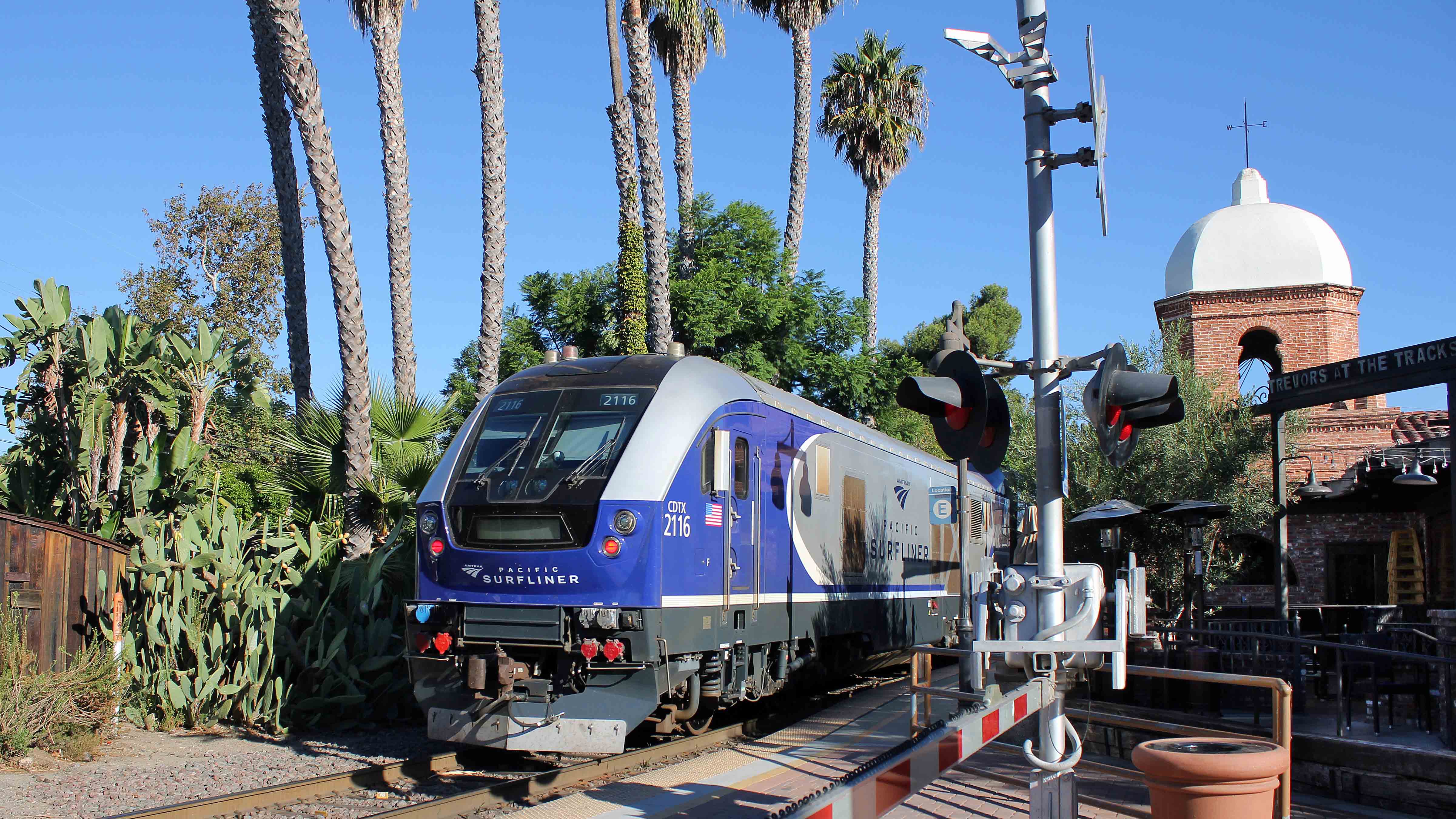 The ultra-modern face of Amtrak SC-44 2116, pushing an LA-bound Pacific Surfliner, makes for an intriguing sight framed amid the tall palms and historic setting of San Juan Capistrano. Indeed, the train-watching experience along California’s Pacific Coast surely remains one that is most worthy of future visits. 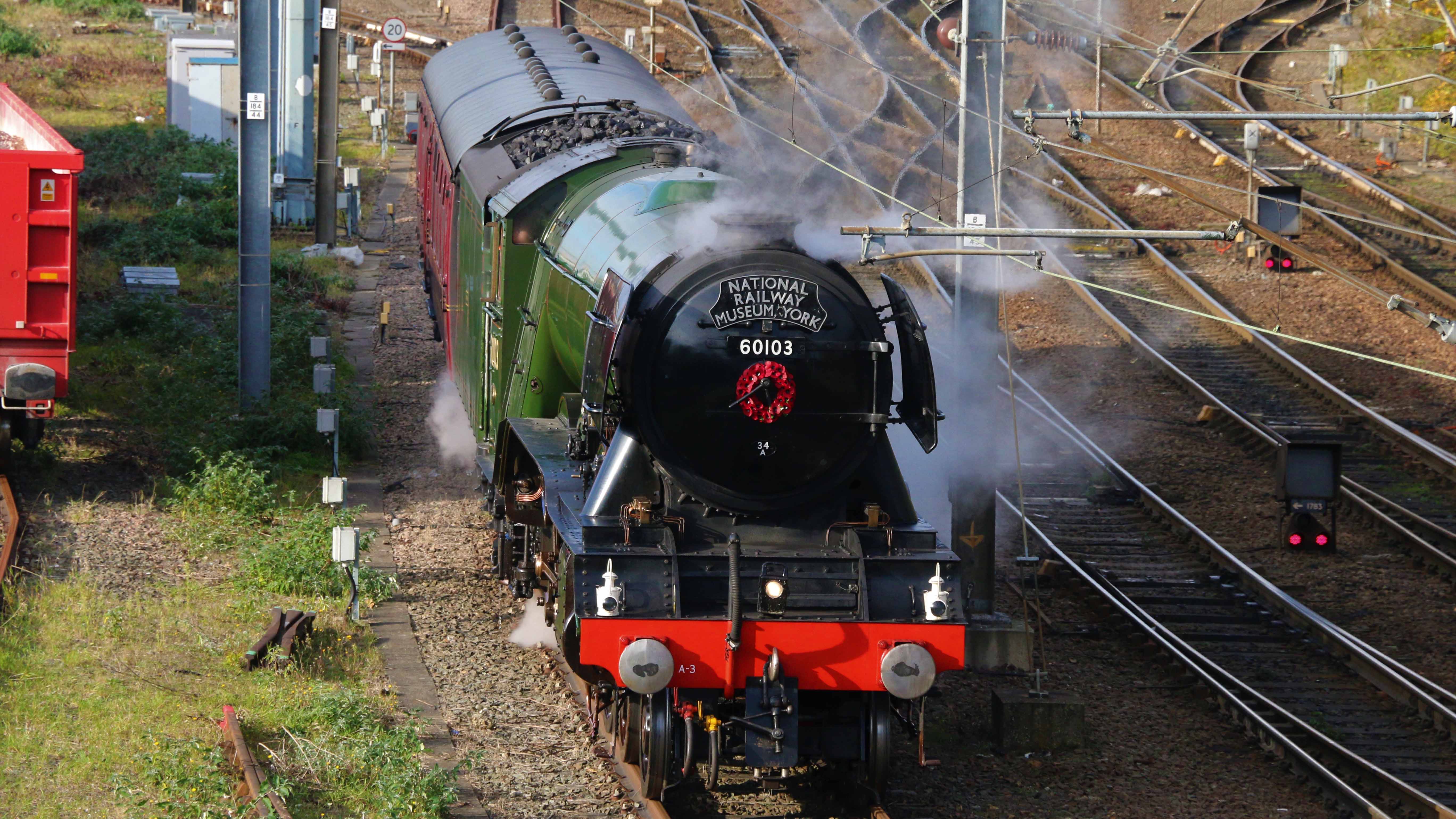