The Legend of Saluda

Saluda. In the lexicon of American railroading, it is one of those single words that require no introduction. To append the phrase that made Saluda both legendary and almost mystical, Saluda was “America’s steepest standard-gauge main line grade.”

Tucked away in the southwest corner of North Carolina along the east face of the towering and magnificent Blue Ridge Mountains, Saluda Mountain stood astride the Southern Railway (later Norfolk Southern) Carolina Division. While the Carolina Division was large, extending from Charleston, South Carolina to Asheville, North Carolina, it was but a handful of the division’s miles – three miles to be exact – between the tiny mountain hamlets of Melrose and Saluda, North Carolina that made the route both an American railroading icon and a name to be respected and on occasion feared by railroaders. Over those three miles between Melrose, Milepost 35, and Saluda, Milepost 32, stood a grade of 4.7 percent (and in fact a short stretch that reached 5.1 percent) – thus, Saluda’s claim to being “America’s steepest standard-gauge main line grade.”

How could it be that a key rail route of the great Southern Railway hosted a grade of ~5 percent? Simply put, there was no other choice. The Blue Ridge Mountains are among the tallest in the Appalachian Chain (not far from Saluda stands Mount Mitchell, at 6,684 feet the tallest mountain in the eastern U.S.). The Saluda line was the great endeavor of Southern Railway predecessor Spartanburg & Asheville, and the route’s chief engineer, Charles W. Pearson, quickly realized that the east face of the Blue Ridge west of Tryon, North Carolina, was an abrupt and sheer climb, without the foothills that typically allowed a rail line to weave its way upgrade more gently. And so the Spartanburg & Asheville climbed the mountain, opening the route in 1878.

In the 19th century age of small steam locomotives and less-than-reliable air brakes, Saluda took its vengeance. By the time Southern Railway took control of the line in 1894, at least 29 railroaders and passengers had been killed in run-away trains on the line. Southern Railway had only moderately more success operating steep Saluda, and when three run-away trains occurred in 1903, the railroad added two run-away safety tracks, one midway down the grade and a second at Melrose.

Improvements to air brakes, bigger locomotives, and rigorous operating practices eventually tamed Saluda (for the most part at least; the last run-away occurred in 1971). By the middle of the 20th century, Saluda was host to the likes of Southern 2-10-2s and 2-8-8-2s, then, beginning in 1949, diesels in the form of Electro-Motive F-units. Saluda, too, saw the daily passage of Southern Railway’s beloved Carolina Special (which was not discontinued until 1968).

The advent of pressure-maintaining brakes and diesel dynamic brakes further enhanced the railroad’s ability to manage Saluda, although extra precautions were always taken, which involved testing air brakes and dynamics prior to the descent and setting retainers at Saluda, then releasing such at Melrose. As for climbing Saluda, that almost always involved a throttle in “Notch 8” and more often than not “doubling the hill” (or often tripling the hill). In 1982, Southern and Norfolk & Western joined to form today’s Norfolk Southern, and a decade later came one of Saluda’s most remarkable moments when Norfolk & Western J-class 4-8-4 611 climbed the grade. NS continued to operate freight traffic over Saluda until December 2001, when traffic on the line (which NS designated its “W Line”) no longer justified its use as a through route. Today, NS continues to operate the line from Spartanburg to Landrum (16 miles east of Melrose), while short line Blue Ridge & Southern operates over the trackage between Asheville and Flat Rock, North Carolina (nine miles west of Saluda).

My first glimpse of Saluda came in 1982 at remote Melrose, where the westbound grade transitions from “only” 1.3 percent and begins the 4-percent-plus climb to Saluda’s summit. In standing trackside and looking up that grade, one’s mind simply says, “no, not possible.” But of course, it was possible, and memorable.

I had the unforgettable experience of witnessing trains battle Saluda on two occasions: the first in June 1982 when the diesels that fought Saluda still wore Southern Railway’s black, white, and silver livery; the second in October 1986, when the line had become Norfolk Southern territory. By desired standards for railroad photography, both days were marked by, shall we say, less than ideal weather. The first visit included a summer downpour; the second featured fog as thick as southern grits. But neither at the time nor since have I regretted the weather, for the rain and fog only seemed to intensify the daunting aura of the place called Saluda.

I was also fortunate to witness trains both ascending and descending the fearful grade. Each, of course, required extraordinary skill and care from the railroaders, as there was nothing more hair-raising or dangerous than bringing thousands of tons of steel down a 4.7 percent grade. And such it was as I watched an eastbound Southern Railway train, headed by Southern Electro-Motive SD40 3200 and two kin, stop with its train balanced on the crown of the grade at Saluda as its crew set car retainers to “high pressure.” To make the descent, the engineer would rely upon the full influence of those retainers, his locomotive’s dynamic brakes, and multiple brake applications, all the while not exceeding 8 mph. By the time the train reached Melrose, the brakeman was already swinging down to prepare to release the retainers and proceed toward Spartanburg’s Hayne Yard.

And the climb? On that foggy 1986 afternoon, I watched a pair of Norfolk Southern EMD SD60s grind at full throttle and “double the hill,” taking first the front half of the train from Melrose to Saluda, then repeating the process with the second. Once the train was reassembled at Saluda, the big Thoroughbred-dressed EMDs would have a far easier time over the remaining 30 miles to Asheville Yard.

The fog-draped, misty autumn day in 1986 would prove the last time I witnessed a train on Saluda, but the Blue Ridge memories are forever etched in memory. Saluda the Grade may today be silent, but Saluda the Legend lives on. – Gary Dolzall 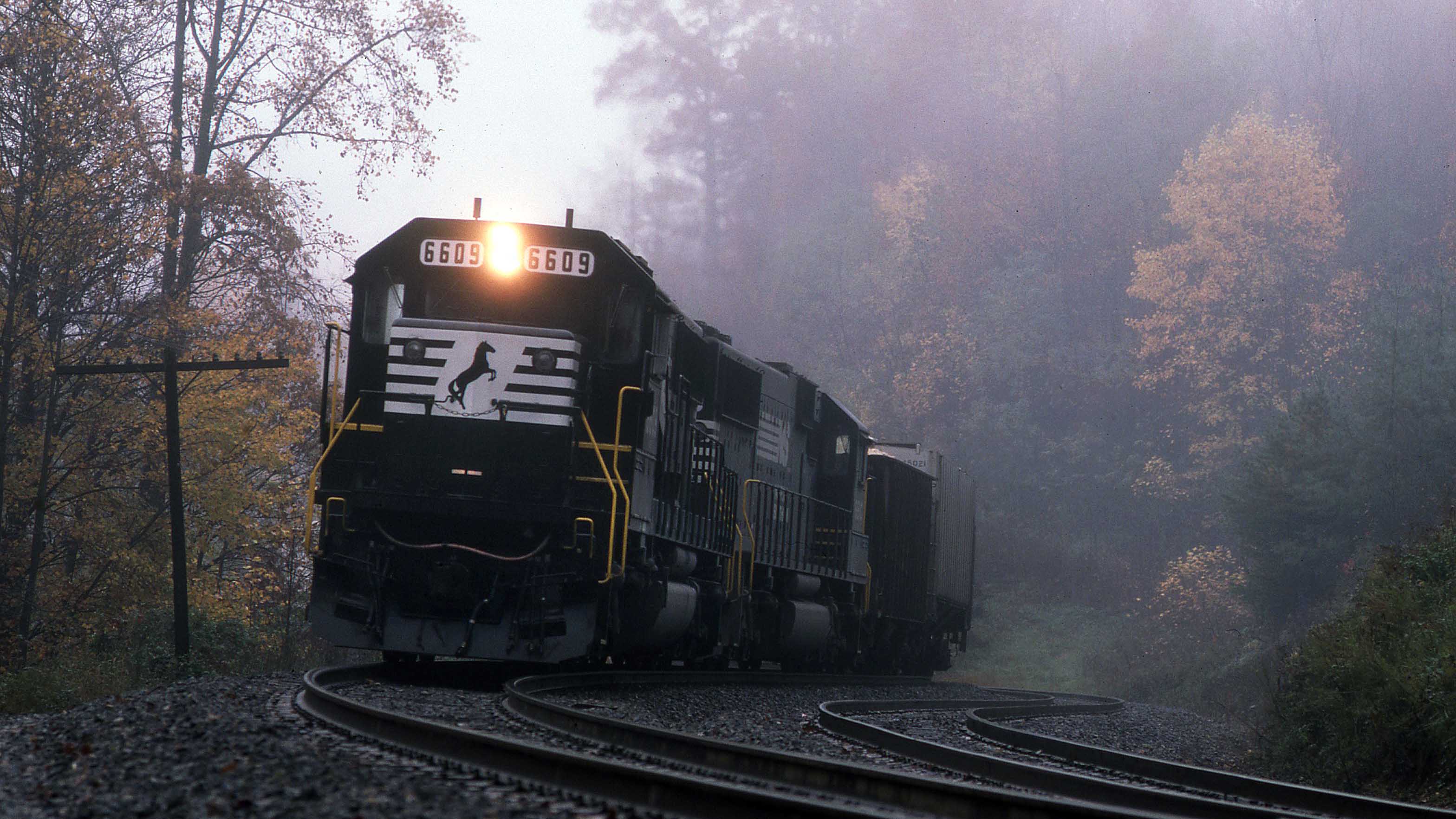 Legendary Saluda: The railroading drama is every bit as thick as the autumn fog as Norfolk Southern EMD SD60s heel through an S-curve amid the Blue Ridge Mountains of North Carolina and grind up the 4-percent-plus grade of “America’s Steepest Standard Gauge Main Line Grade.” 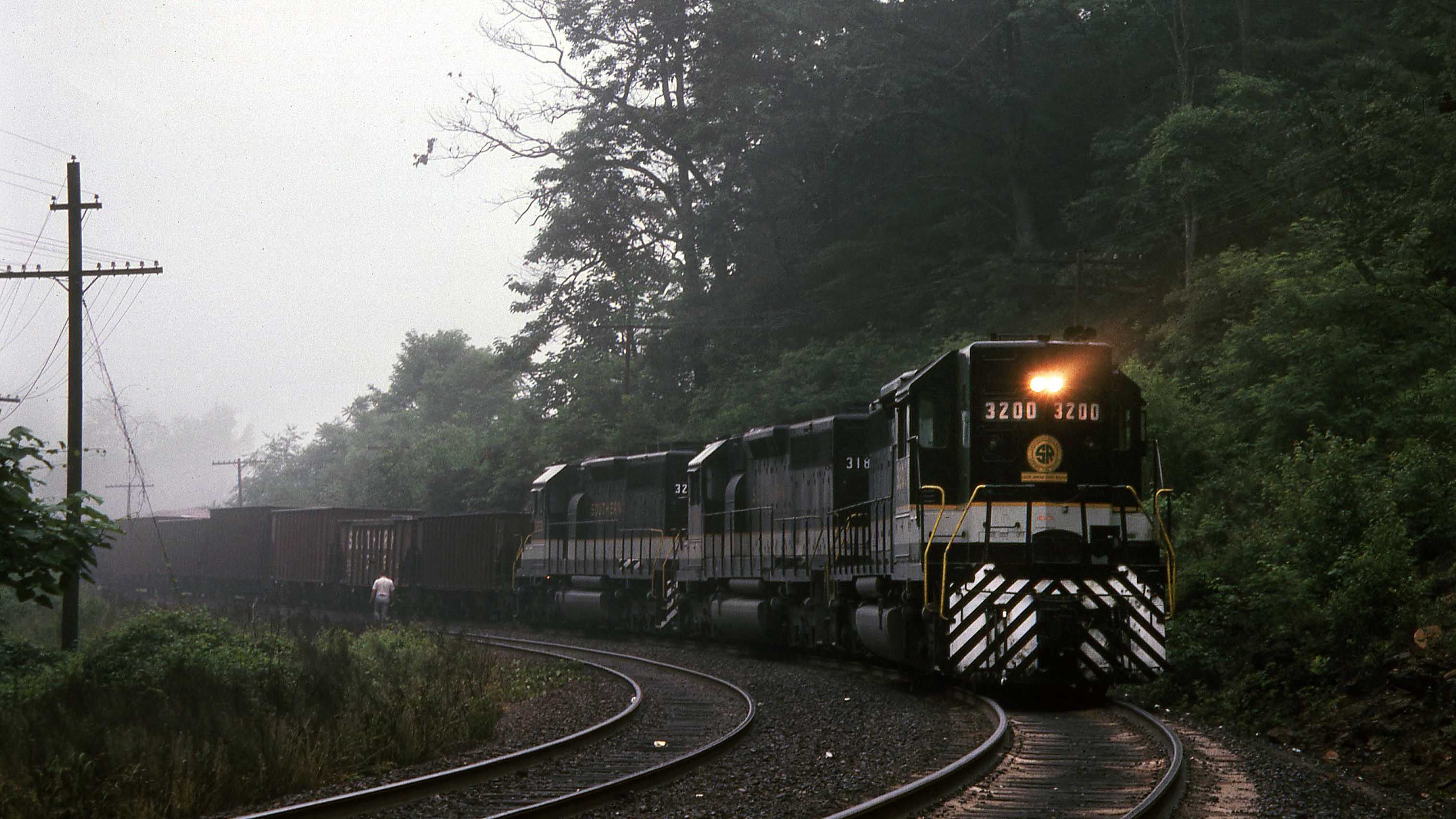 Its consist draped over the crown of the grade at Saluda, North Carolina, a Southern Railway eastbound train is stopped as its crew sets retainers to “high pressure.” With its air brakes and the dynamics of its SD40s at full toil, the train will not exceed 8 mph as it makes the tortuous descent of Saluda Grade on a summer 1982 afternoon. 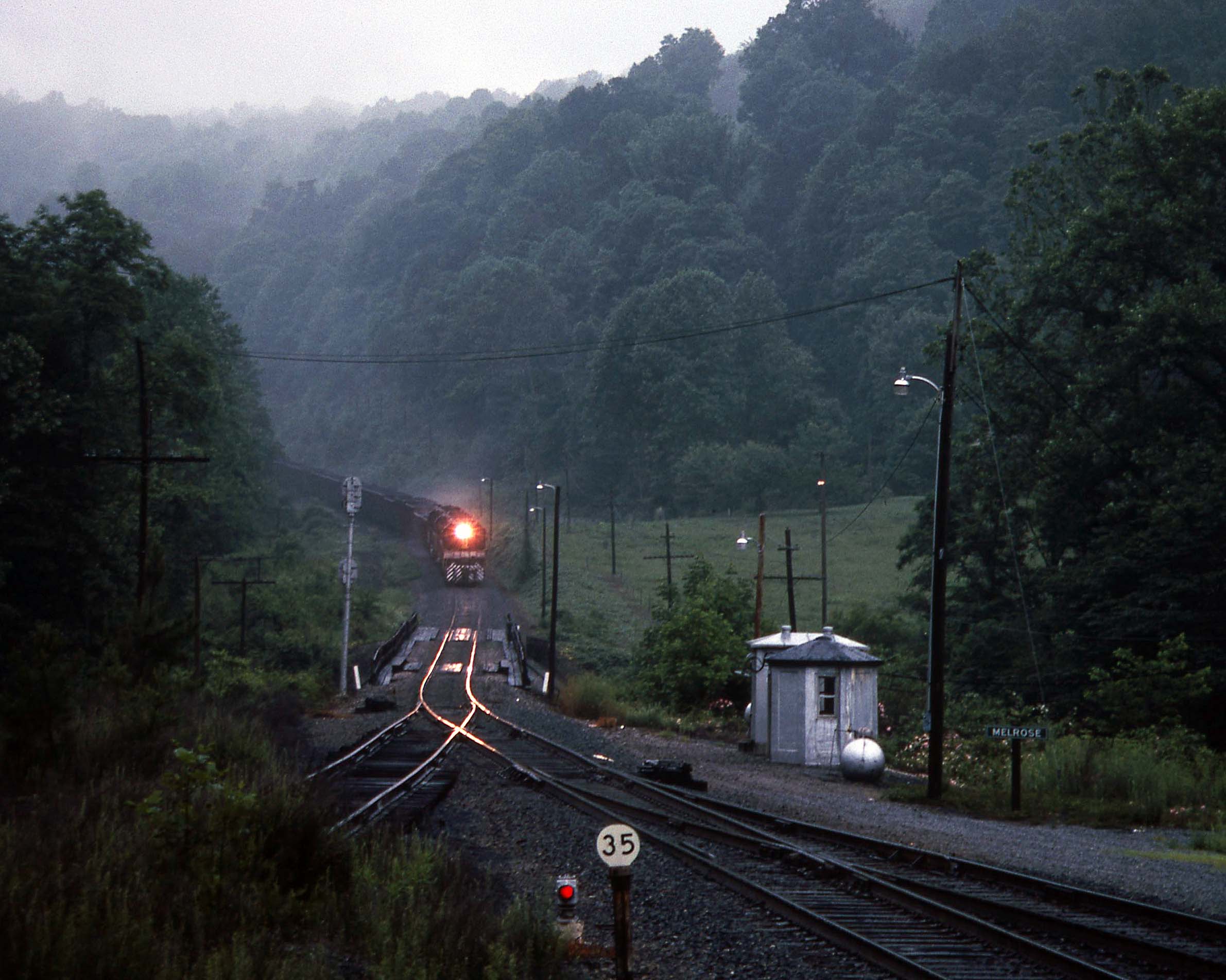 With its headlight glinting off wet rails and its dynamic brakes filling the mountainside with a howl, Southern SD40 3200 and kin near Melrose (Milepost 35) and the bottom of the steepest segment of Saluda Grade (above). With the train across the bridge over Joel’s Creek, the brakeman prepares to climb down (below). At Melrose, the retainers will be released for the run onward to Hayne Yard in Spartanburg, South Carolina. 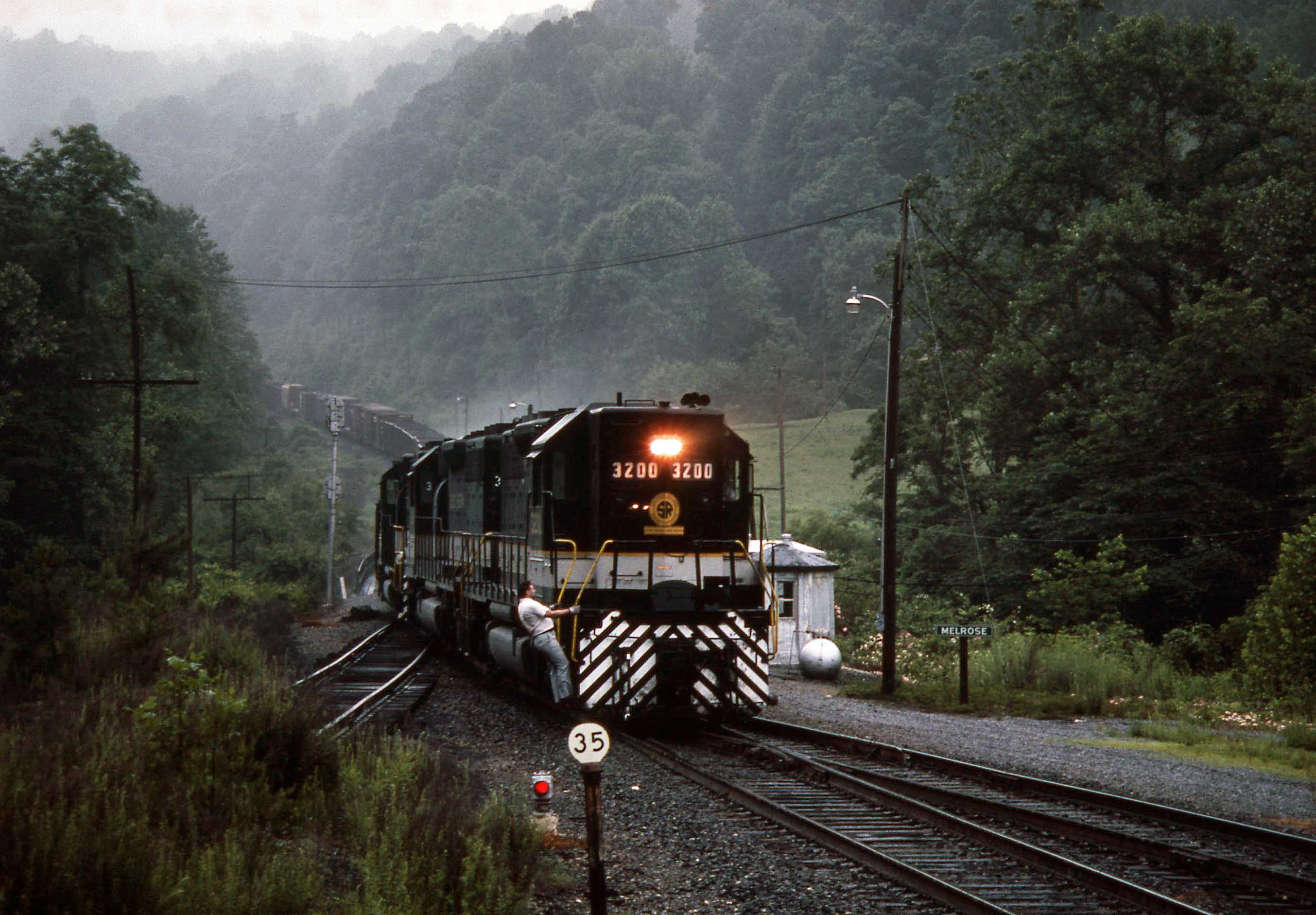 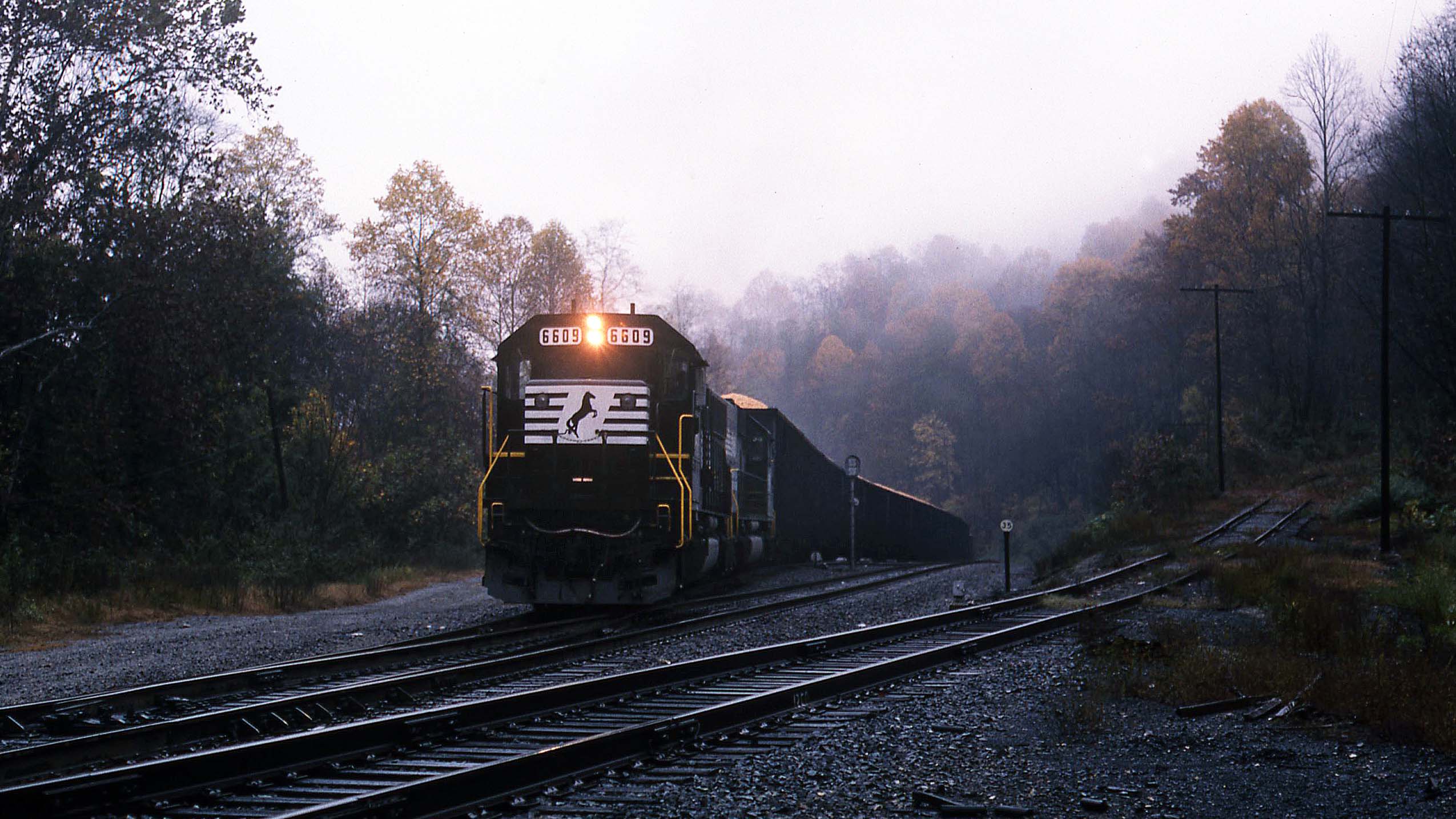 On a foggy autumn day in 1986, Norfolk Southern SD60 6609 is on the point of a westbound freight that has just climbed the 1.3 percent grade from Tryon and will now “double the hill” to get its train up Saluda Grade. That’s run-away Track No. 2 at the right (above). A short time later, the first climb up Saluda’s steep grade almost complete, NS 6609 and the front half of its train approach the hamlet of Saluda (below). 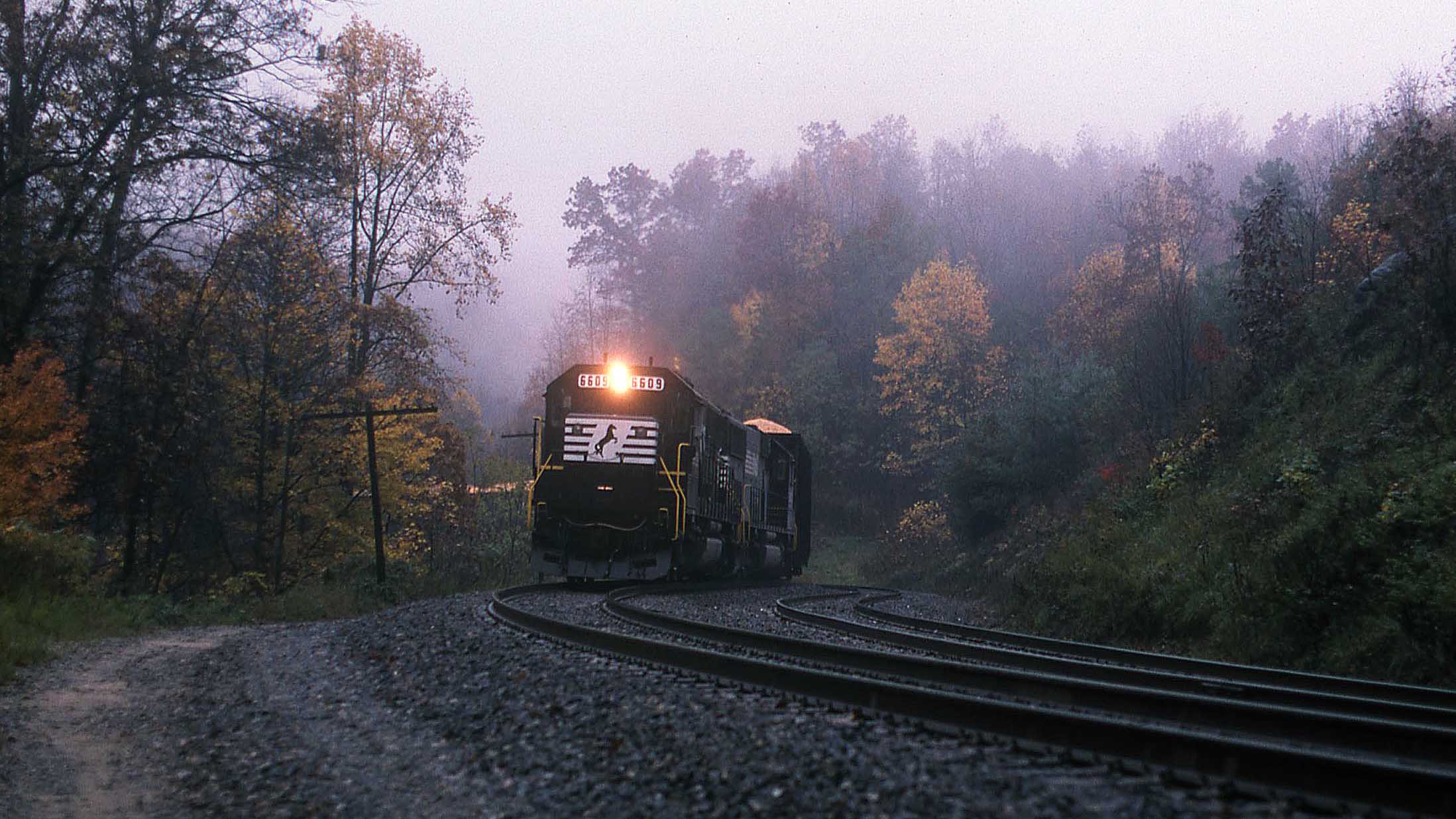 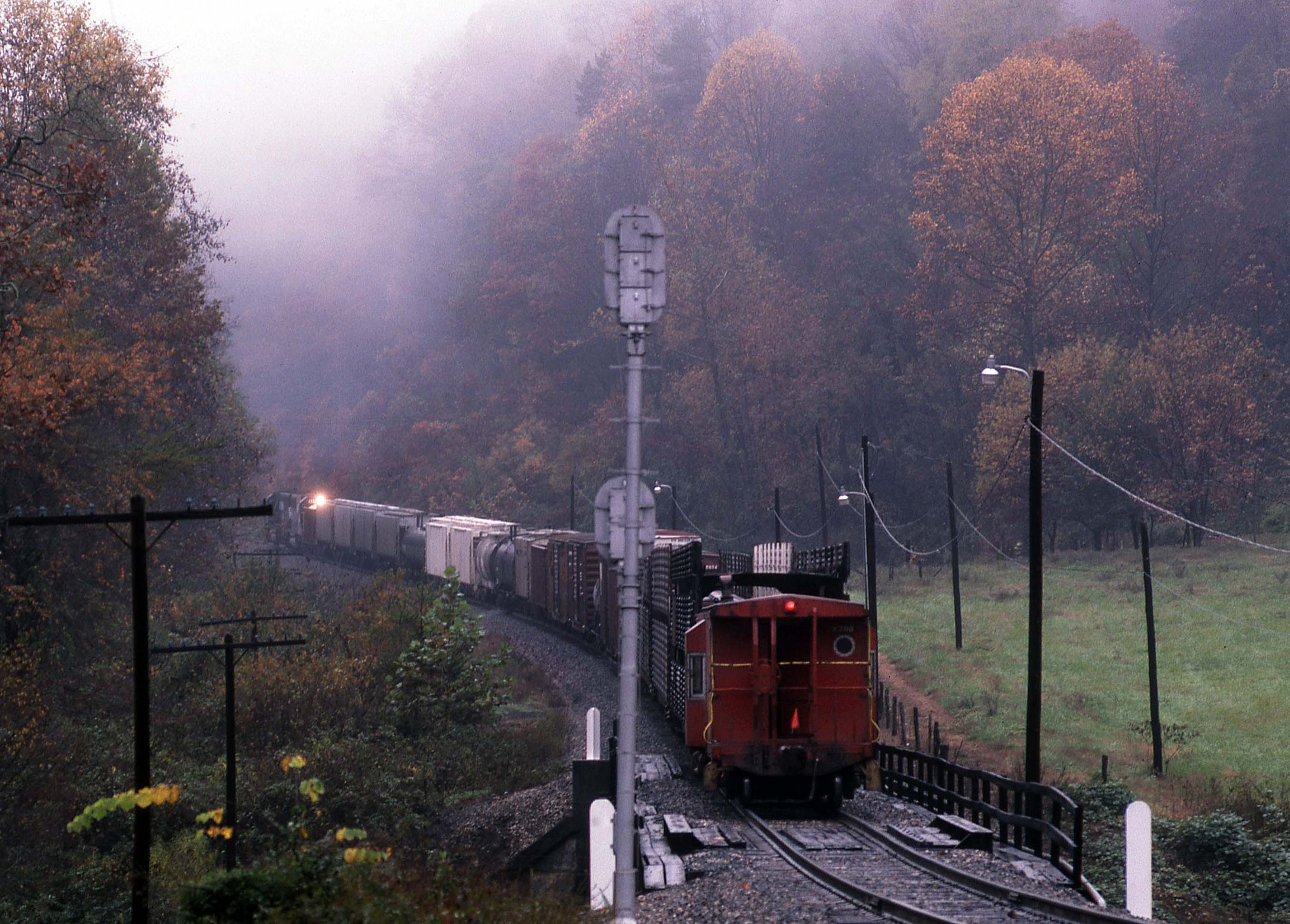 Having run light back downgrade to Melrose and coupled to the rest of its train, NS 6609 and its sister again begin the steepest part of the climb, trailed by a mix of freight equipment and one of Southern Railway’s distinctive bay-window cabooses (above). Once again nearing the summit, the westbound fights gradient, sharp curvature, wet rails, and tonnage to complete its battle with Saluda (below). Once the two cuts of the train are reassembled at Saluda, the big EMDs will make the 30-mile run to Asheville Yard. 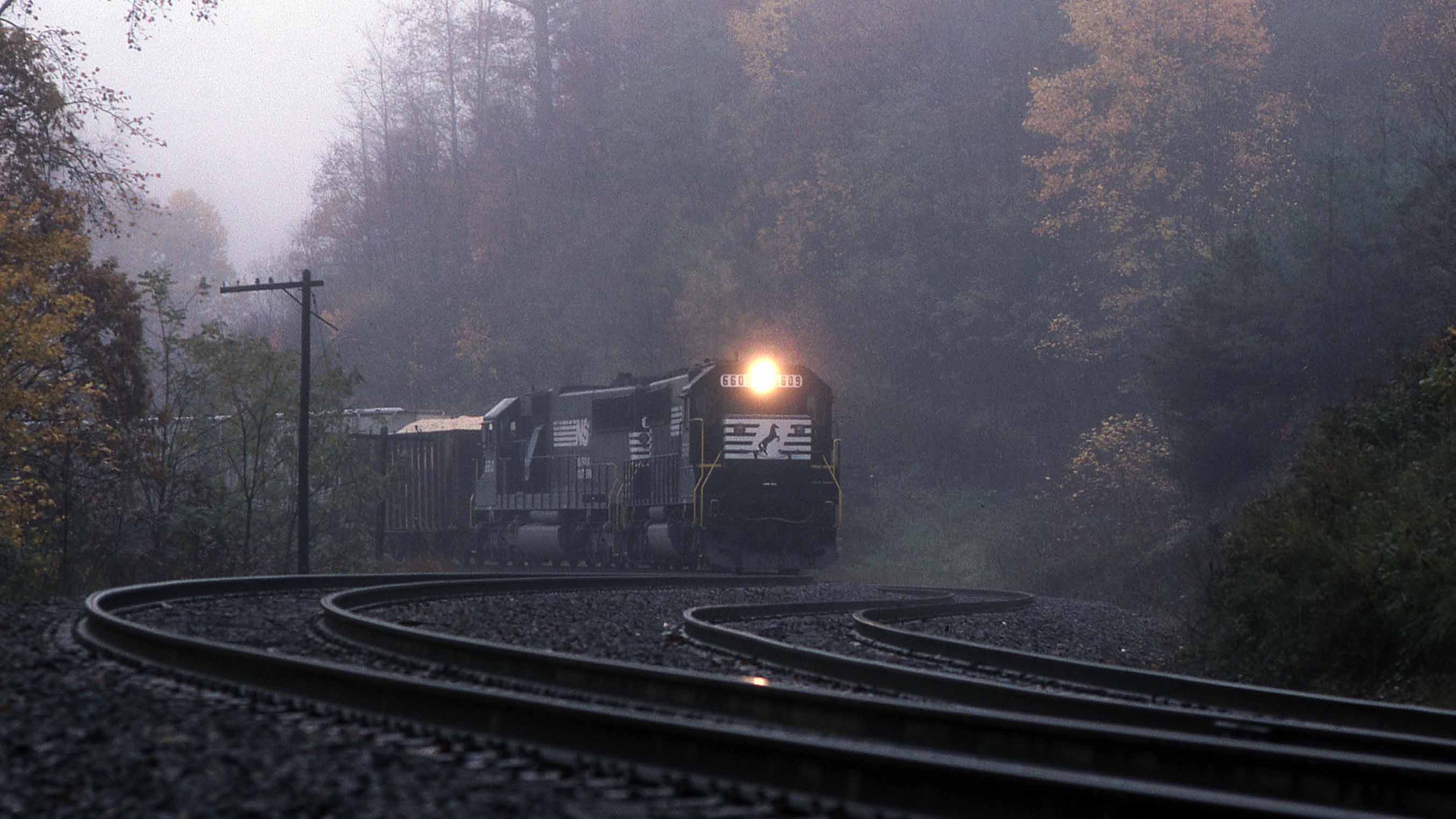