“For a railfan, a short line is as much as about spirit and its unfailing attraction to a train-watcher’s heart and mind as it is about route miles or revenue and tonnage statistics.”

Among the pioneers of American railroad journalism, few writers stood more accomplished that Lucius Morris Beebe (1902-1966). Beginning in 1938 with High Iron, Beebe would pen more than 20 railroad books, among them classics such as 20th Century and The Trains We Rode (in two thick volumes). But quite arguably, Beebe’s most evocative single work was a book published in 1947 – Mixed Train Daily.

Beebe’s Mixed Train Daily was subtitled “A Book of Short-Line Railroads.” It was that, and it was much more, because in the 368 pages that rested between its hard covers, the book captured the unique appeal and undeniable mystique that was – and is – American short-line railroading.

The title “Mixed Train Daily” referenced what, in the steam era, was a short-line penchant to haul some freight and, in the same consist, tag on a coach or combine to carry a passenger or two that might be looking to go somewhere. The steam-powered, mid-20th century brand of short-line railroading as captured by Beebe, with a diminutive 2-8-0 or the like bobbing along a rural landscape over uncertain track with a mixed consist trailing along behind, is largely lost to history, but the American short line and much of its charisma remain alive and well.

What is a short line? To some degree, take your choice of definition. If one uses the U.S. Surface Transportation Board definition, it equates to a “Class III” carrier with less than $39 million in annual revenues. The American Association of Railroads (AAR) squeezes short lines into a category below “regionals” and today classifies short lines as among “Local Railroads.”

Either of those rather antiseptic definitions would surely bring only a frown from author Beebe. I suspect he would argue – as indeed his Mixed Train Daily so well demonstrated – that for a railfan, a short line is as much as about spirit and its unfailing attraction to a train-watcher’s heart and mind as it is about route miles or revenue and tonnage statistics. To some degree, the shorter, the more tenuous, and the more remote a short line, often all the more entrancing it is to the train-watcher (if not to its owners and accountants).

Short lines often endure for decades; alas, many others, reliant upon one or two shippers, do not. But happily, from the unwanted branch lines of big rail carriers, new short lines are frequently born. So, by any definition you choose, there are scores of railroad short lines operating in the United States today. As often as not, those short lines of the present and past have names that are as memorable as the railroads themselves – the Apache Railroad in Arizona, the McCloud Railway in northern California, Mississippi’s Columbus & Greenville, Illinois’ Bloomer Line, Pennsylvania’s Shamokin Valley, Kentucky’s Cadiz Railroad, New England’s Housatonic Railroad, and Vermont’s Green Mountain Railroad are just a few such examples.

For the train-watcher, the appeal of a short line takes many forms – certainly a short line is easier to grasp and understand than a Class I giant that measures it route miles in the tens-of-thousands and its locomotives in the hundreds. Short lines are, if you will, easy to befriend and, often as not, are friendly in return. Spend time along a short line and you will likely become known to the engineer and conductor – and perhaps even the company president – on a first-name basis. And if it is true that everyone loves an underdog, then short lines often call to the heart in that manner, too, what with their occasionally uncertain right-of-way and car loadings that may on some days be counted on the fingers of one hand. But one needs to be careful not to overly generalize, for there are also short lines that may be limited in mileage, but most certainly are not small in the urgent way they operate or in the heavy tonnage they haul.

Most assuredly, whether in the days of Beebe’s Mixed Train Daily, when the trackside experience might have been that of a half-century-old tea-kettle of an 0-6-0 wandering through Georgia’s pine forests, or today, where on any number of short lines from Maine to California one can discover vintage diesels still hard at toil and earning their keep, short lines represent for the train-watcher a window to witness past generations of motive power.

The American short line: For the railfan, making its acquaintance is sure to create memories that will be long remembered. 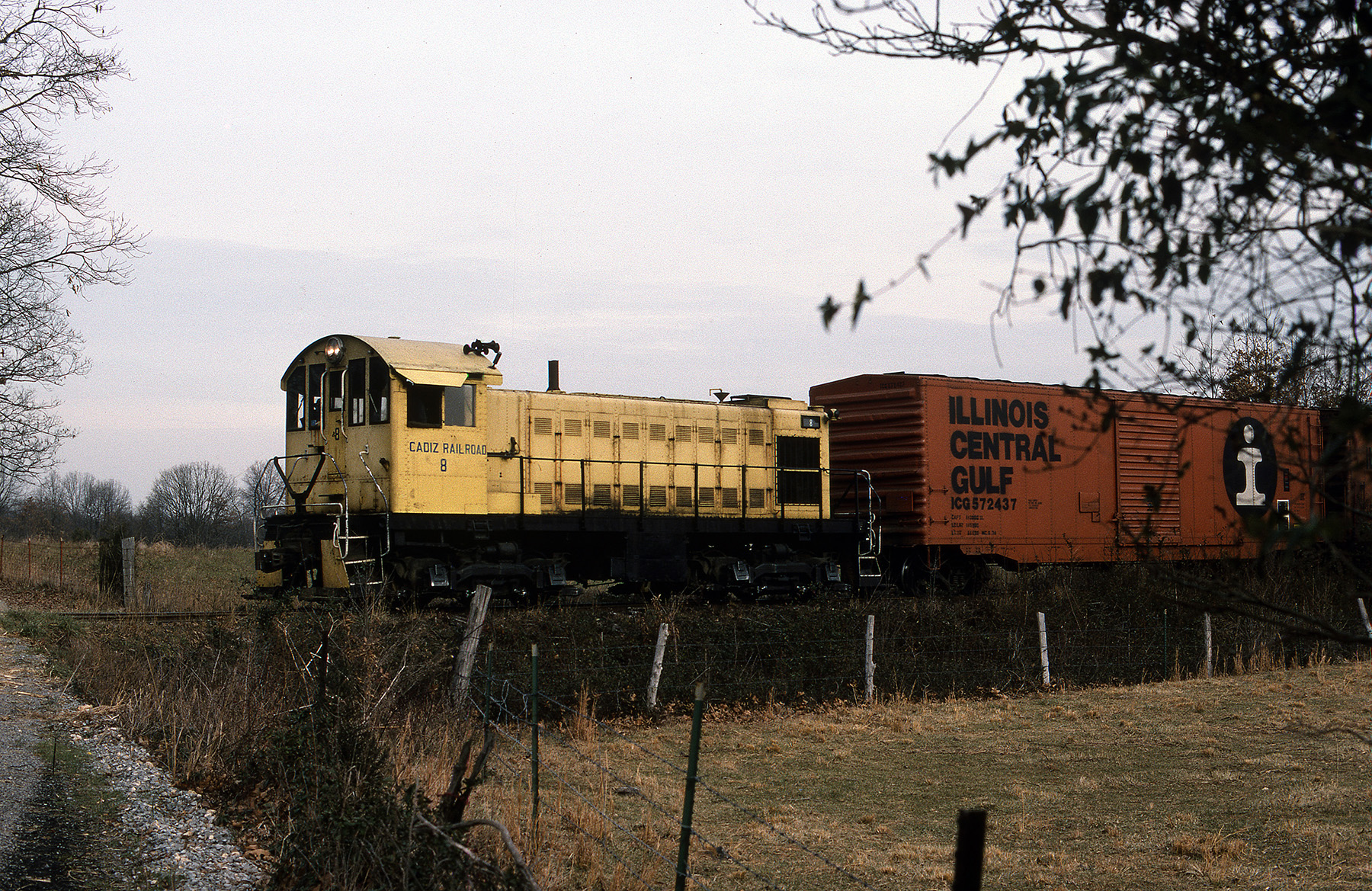 In a pair of photographs (above and below) that evoke the special appeal of American short lines, diminutive Cadiz Railroad Alco S1 No. 8 and an elderly wooden caboose make a Christmas Eve trek through Western Kentucky in 1975. The ten-mile-long Cadiz Railroad was opened in 1902 and survived eight decades until it was abandoned in 1985 after its major shipper closed. Photos by Gary Dolzall. 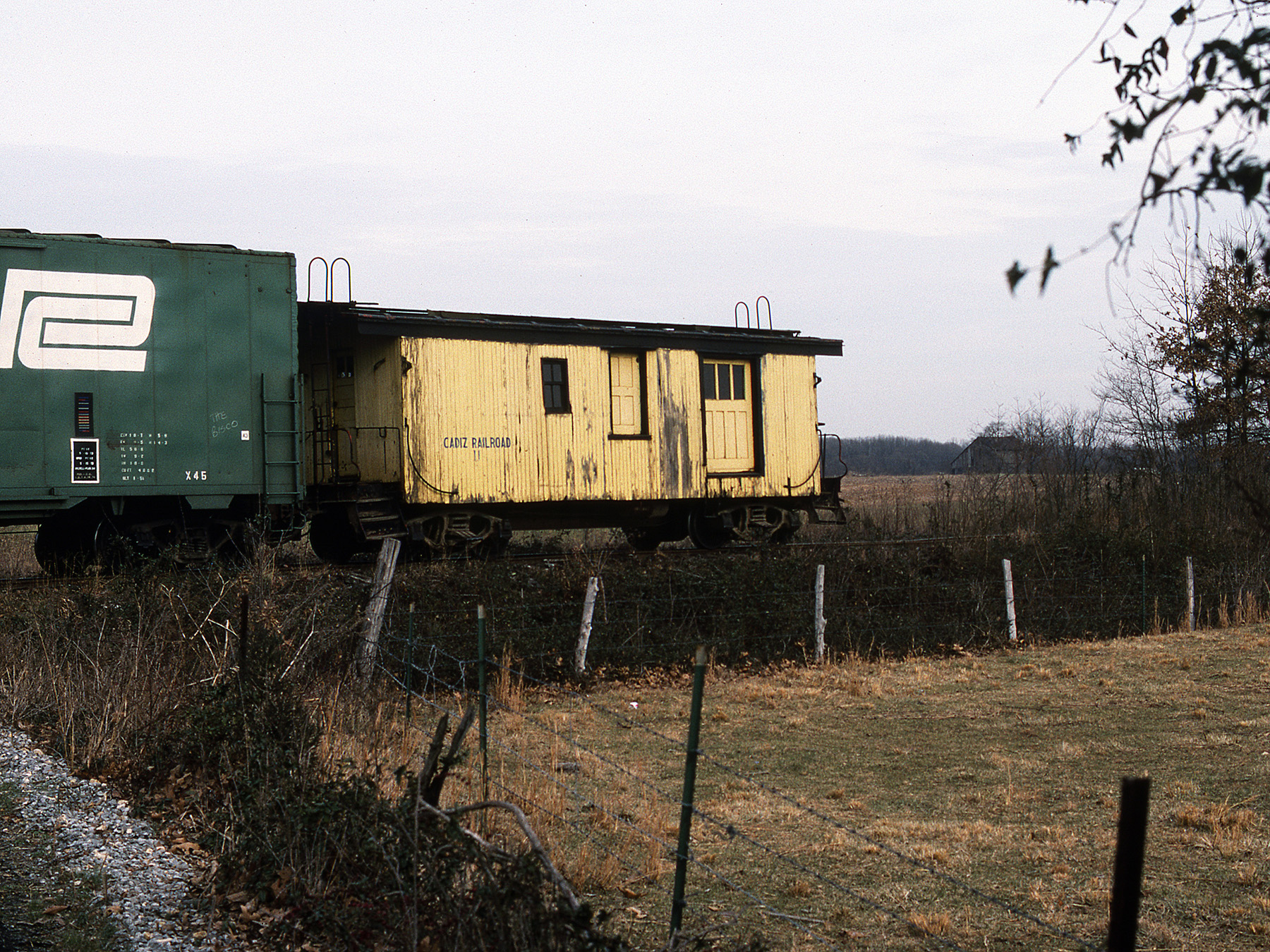 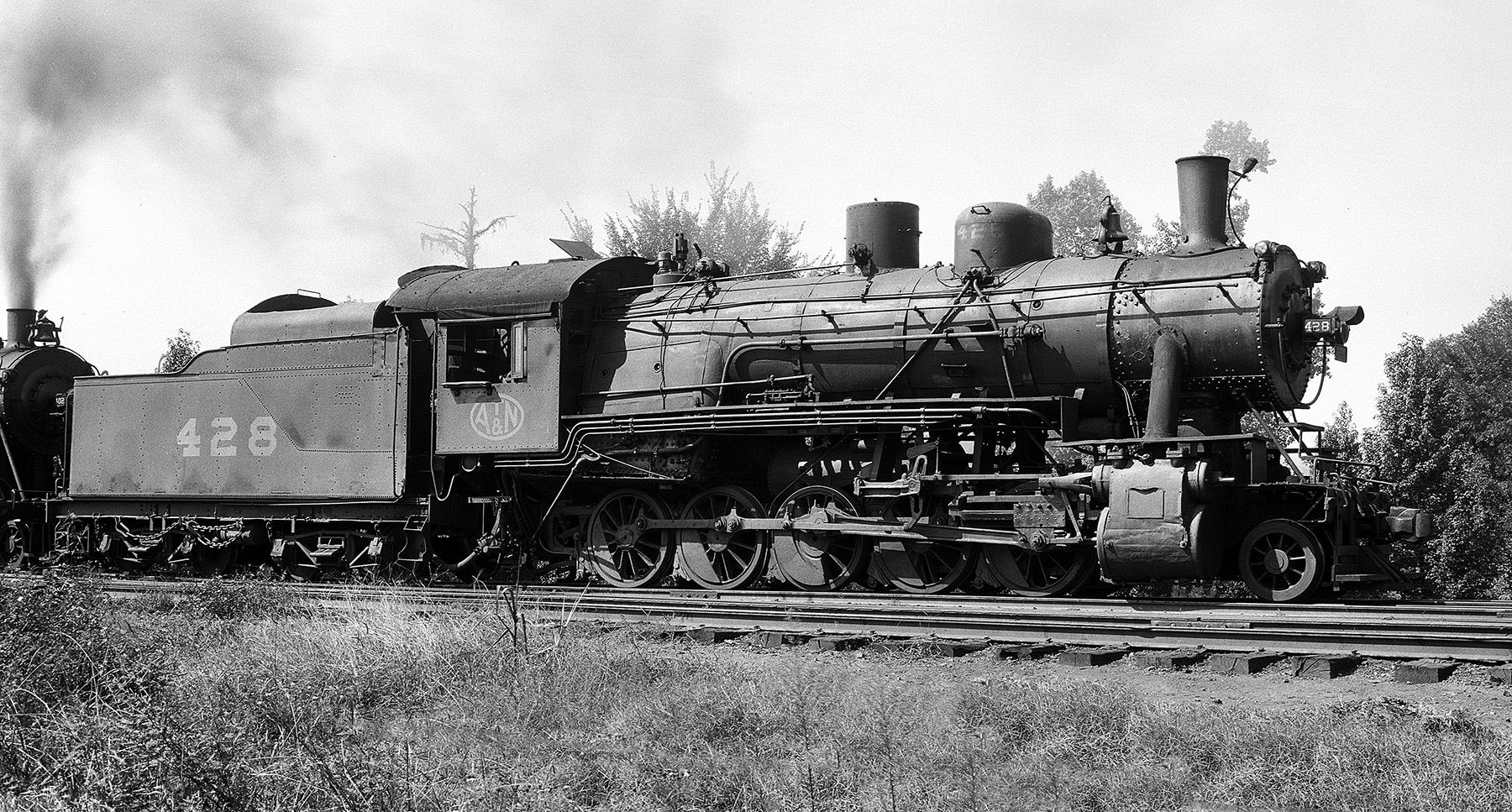 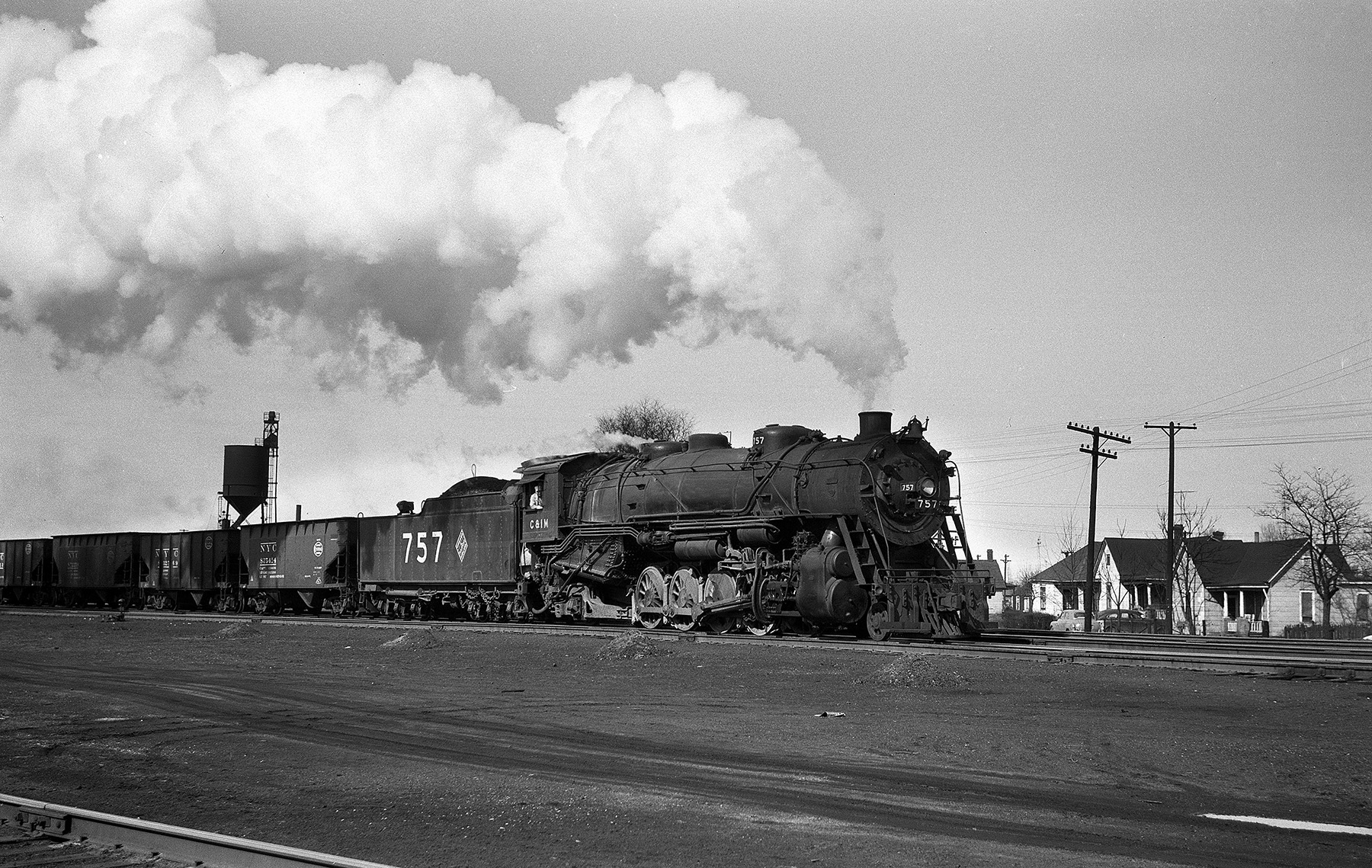 Chicago & Illinois Midland may have been only 121 miles in length, but as a coal-hauler it called upon big power to haul heavy tonnage. Noted railroad author and photographer Joe Collias captured C&IM 2-10-2 at work in Springfield, Illinois. Today the line is a part of the Genesee & Wyoming (G&W) family of railroads. Gary Dolzall collection photo. 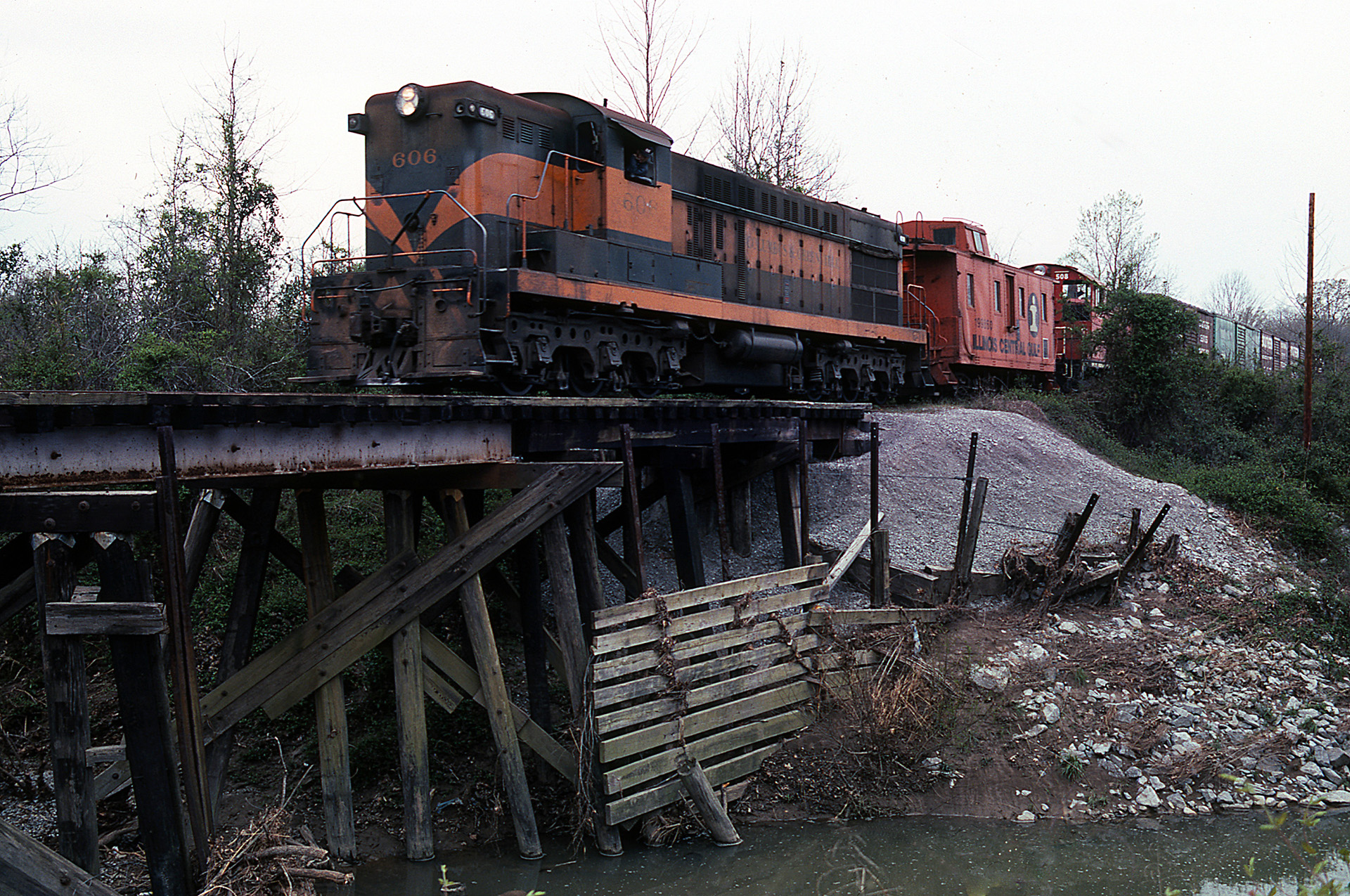 Whether in the steam or diesel eras, short lines have been a siren for railfans thanks to their often rare and aged motive power. Few such cases were more compelling than Mississippi’s Columbus & Greenville, which in the diesel era called upon a fleet of rare Baldwin road-switchers. Near Maben, Mississippi, in March 1976, C&G Baldwin AS416 606 eased over a decidedly uncertain small trestle. A truncated version of the C&G exists today as part of the G&W system. Photo by Gary Dolzall. 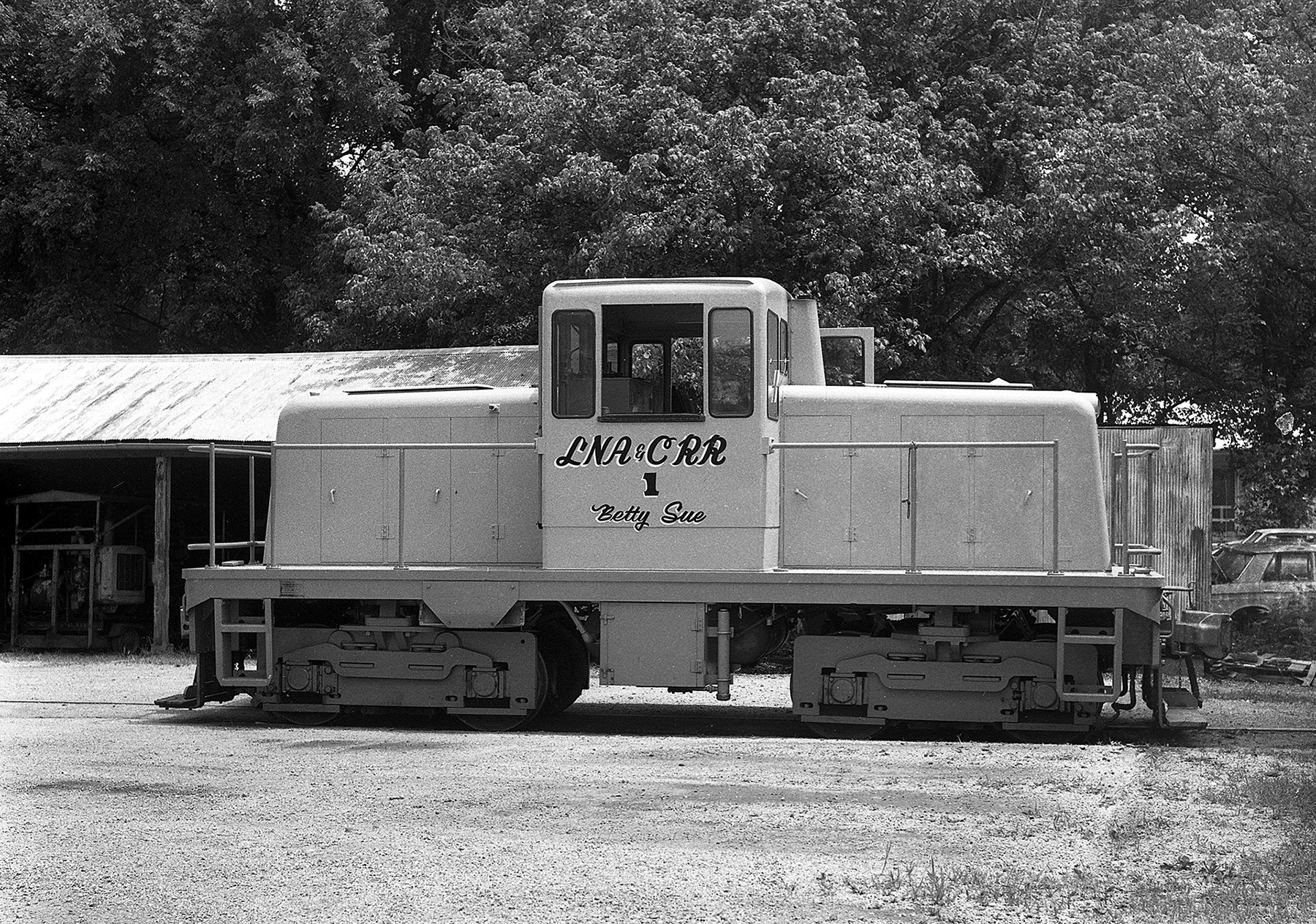 *Louisville, New Albany & Corydon’s diminutive General Electric 45-tonner, with its “One Spot” numeral and “Betty Sue” name, surely captured the unique appeal of a short line! The 7.7-mile LNA&C carried on for over a century in southern Indiana and is today known as Lucas Oil Rail. Photo by Oscar Kimsey; Gary Dolzall collection.* 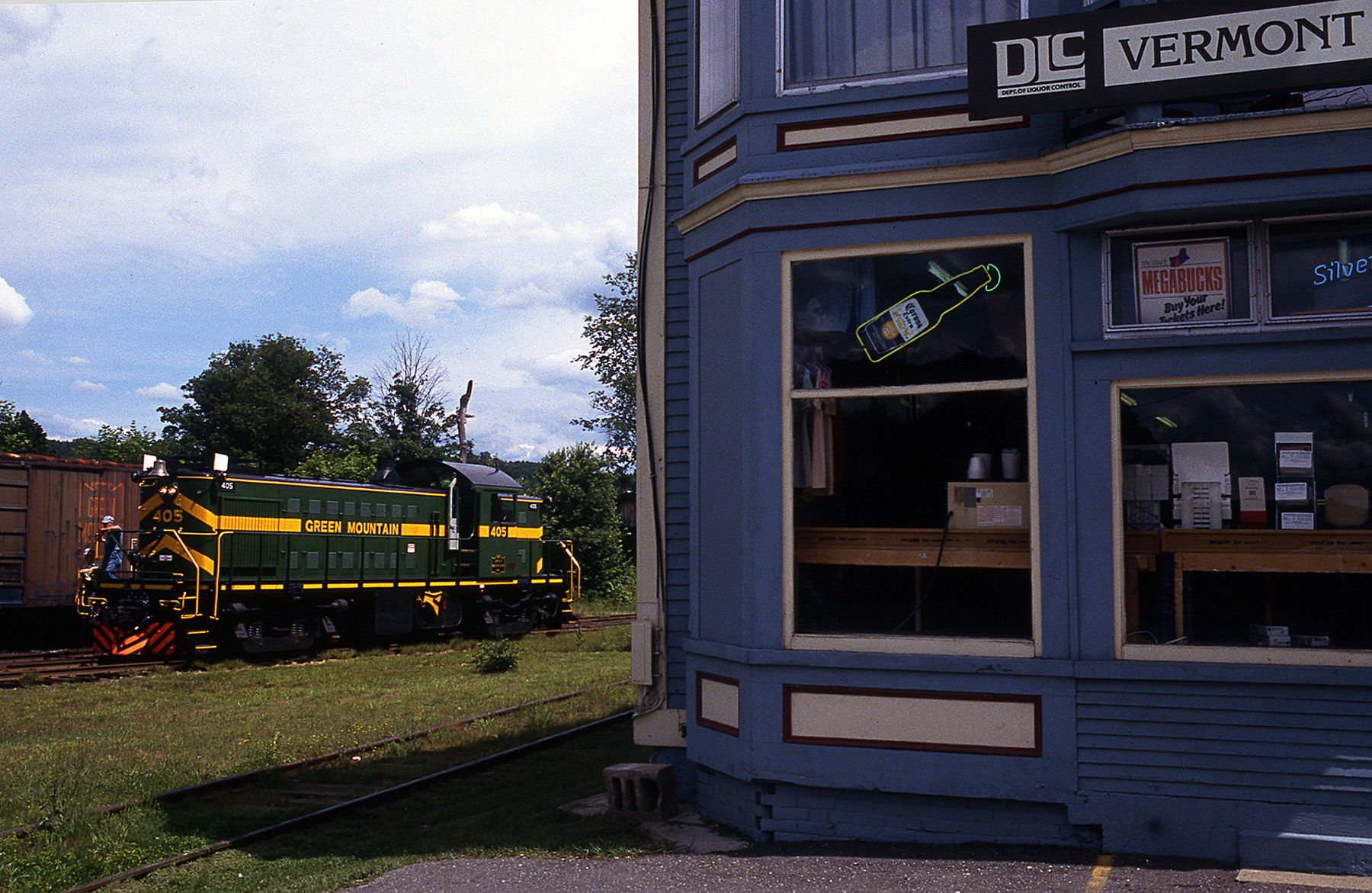 The Green Mountain Railroad took over the famed Rutland Railroad’s Bellows Falls-Rutland (Vermont) line in 1964 and is today part of the Vermont Rail System. GMRC Alco RS1 405, which originally served the Rutland and wears a Rutland-like livery, glides along in Chester, Vermont after powering a fall foliage excursion. Photo by Gary Dolzall. 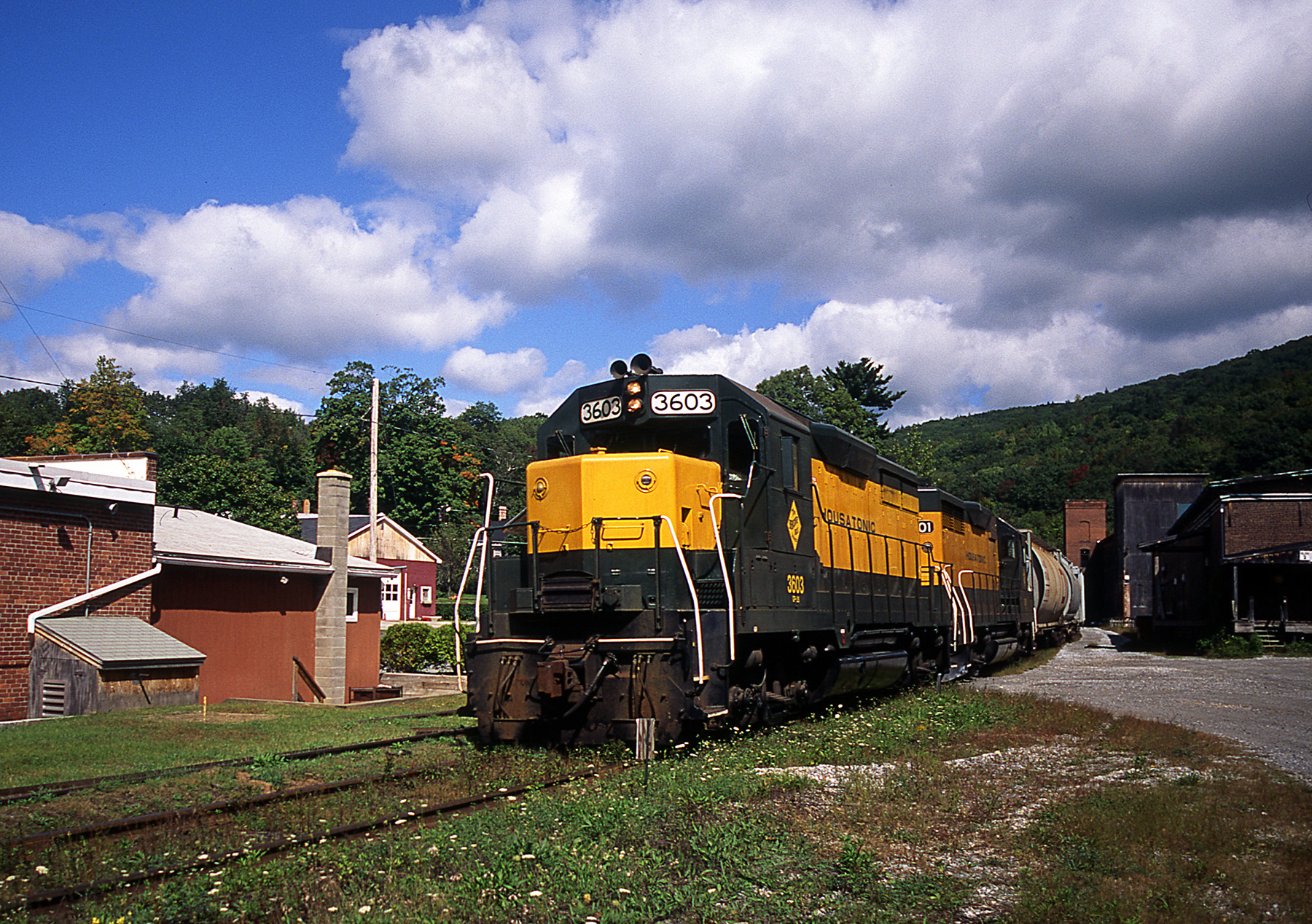 The Housatonic Railroad, which operates among the Berkshire Hills of western Massachusetts and Connecticut, is illustrative of small railroads born from parts of large ones. The present-day Housatonic was formed in 1983 and operates ex-New Haven (Conrail) trackage. At Housatonic, Massachusetts, a pair of colorful HRRC EMD GP35s are toting southbound tonnage. Photo by Gary Dolzall. 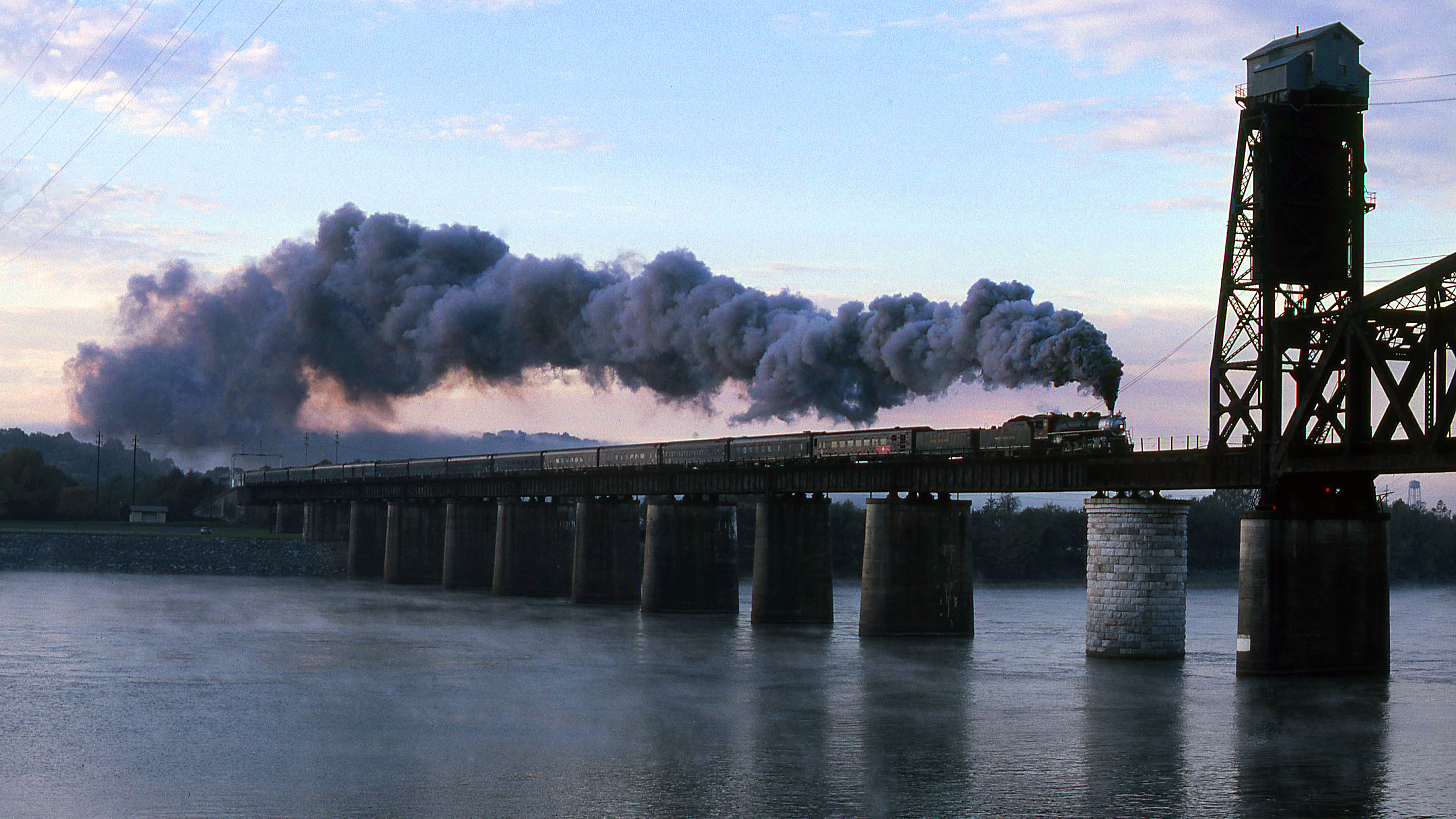 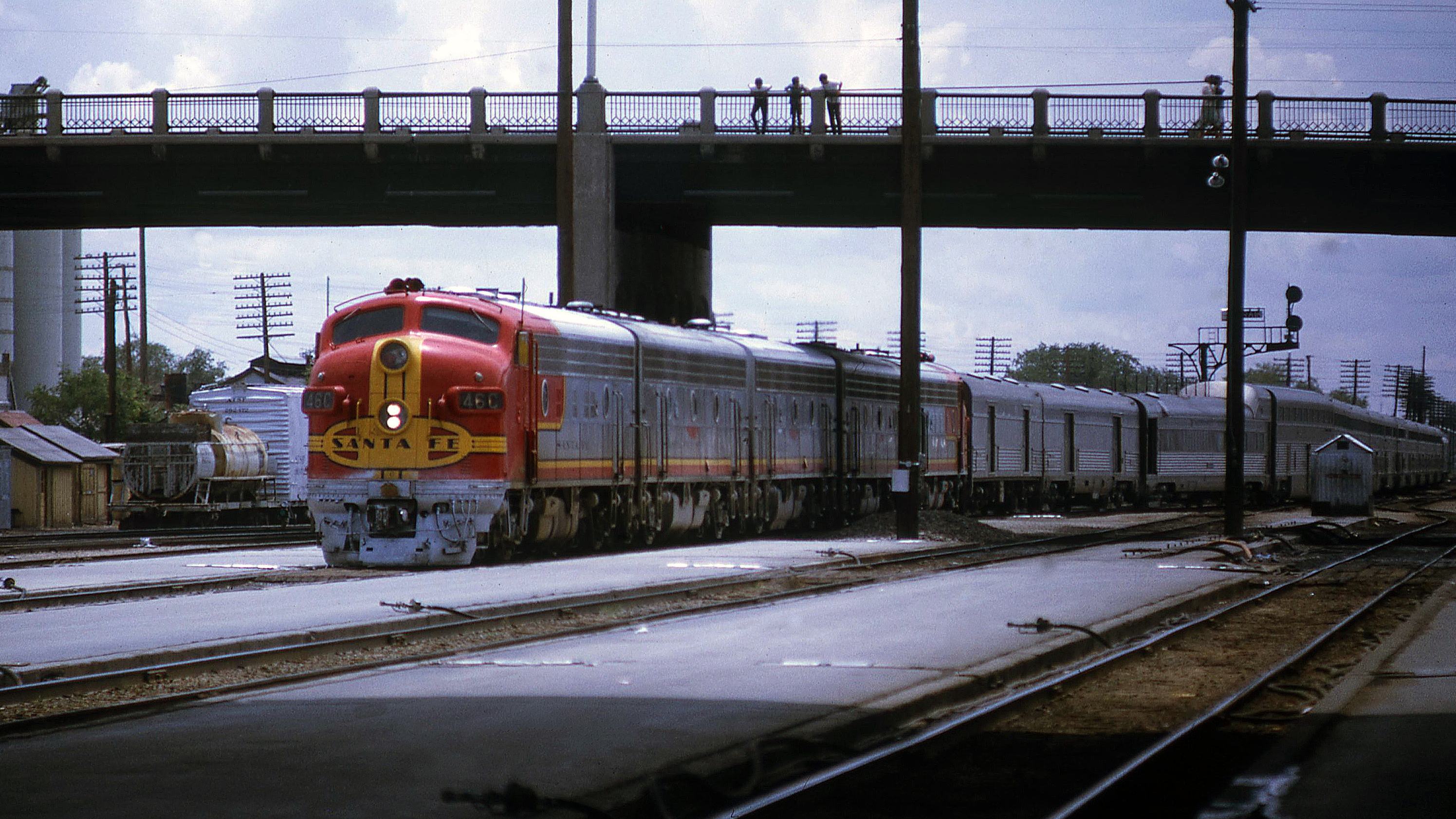