After both an introduction to his O Gauge layout 'Brymbo Junction' and a further piece about the choice of locomotives, author Allen Jackson now goes into detail about the use of semaphore signalling - in prototype and model.

The railway semaphore signal is alive and well in Britain in both the national railway scene and the preserved arena. The semaphore signal kicked off in about 1840 with rudimentary devices like disc and crossbar signals where a different sort of shape was displayed to an engine driver as to go or stop. This was a few years after locomotives were to be preceded by a policeman on foot with a red flag. Mechanical road traffic had similar strictures.

The railways developed in the 19th century in a haphazard manner punctuated by a series of appalling accidents. Eventually the British government in parliament put forward legislation that all railways had to introduce systems that were much safer and relied less on the human element and more on safety devices built into the system. Even then they were given several years to complete the work thanks to the complex nature and size that the railways had become. Included in the parliamentary laws were parts to do with continuous braking fail safe systems. Mostly this concerned vacuum brakes where a pump on the engine had to evacuate a pipe to keep the brakes from coming on. If the pipe broke or there was any other leak the brakes came on, an obvious safety plus. Eventually vacuum brakes would not be powerful enough for high speed heavier trains where air brakes are the norm.

The initial mechanical system that was adopted was the Absolute Block system and, astonishingly, the system is still in use in the more rural parts of Britain as well as preserved railways where speeds and traffic densities are low.

Absolute Block consists of a section of track controlled by semaphore signals originally. A red home signal allows entry into a block and another exit from it. In between there might a yellow distant signal whose only purpose is to tell the driver what position the next red signal is at. This is needed where trains might be travelling at speed and weigh several hundred tons and need advanced warning of when to stop. Signal boxes control a

block section and there would be one signal box per block section originally, meaning there would be about 15,000 signal boxes in Britain in 1947. Trains are passed from block to block by the signal boxes and telegraphic instruments were developed that showed the status of each block to a signal box either side of a particular block so everyone knows where and what trains are doing. So the whole railway would be a network, wifi like, that spanned the country. The absolute block system was only applicable to double track where trains ran in opposite directions on different tracks. On single lines special equipment was developed that prevented a second train entering a single line section until the first had passed safely out of the section. This too is still in operation in Britain on single lines.

The semaphore signal developed into a complex system interlocked with points and other signals and using electrical logic gates to further interlock with track circuits.

Systems were subsequently developed where the signalling was transmitted to the cab of the locomotive and there were no trackside signals. These signals contain a form of remote control where over-speeding or other train driving rule breaking will apply the train brakes automatically. In addition every train is equipped with what the airlines would call a ‘Flight Data Recorder’ where almost every parameter input to the train is recorded and every incident capable of analysis to see what happened. The airlines mostly have the aircraft’s status sent back to a ground station in real time and no doubt the railways will follow suit.

The driverless car has made tentative journeys onto public roads and the Docklands Light Railway in London does not have train crews and is completely automatic. This is fine where routes are simple and works well but signallers and signalling may be required for some time yet on the wider systems. 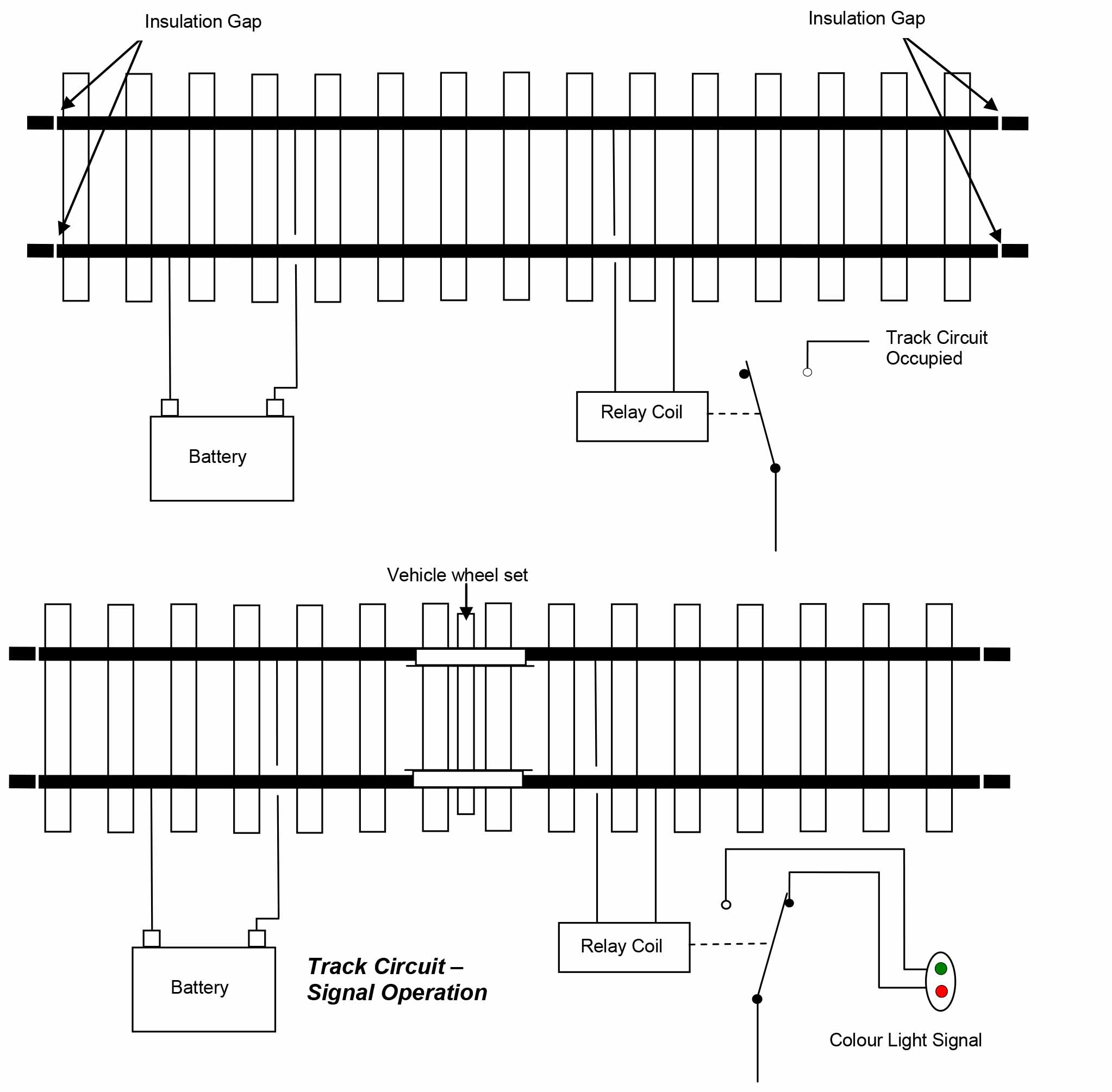 Figure 1. A much simplified diagram of a track circuit where a DC current can flow when a railway vehicle wheelset makes a circuit to either show an occupancy light in a signal box/interlocking tower or control colour light signals in concert with other track circuits. In the more modern reality AC circuits are used where each track circuit is allocated a set frequency, rather like an FM radio station. 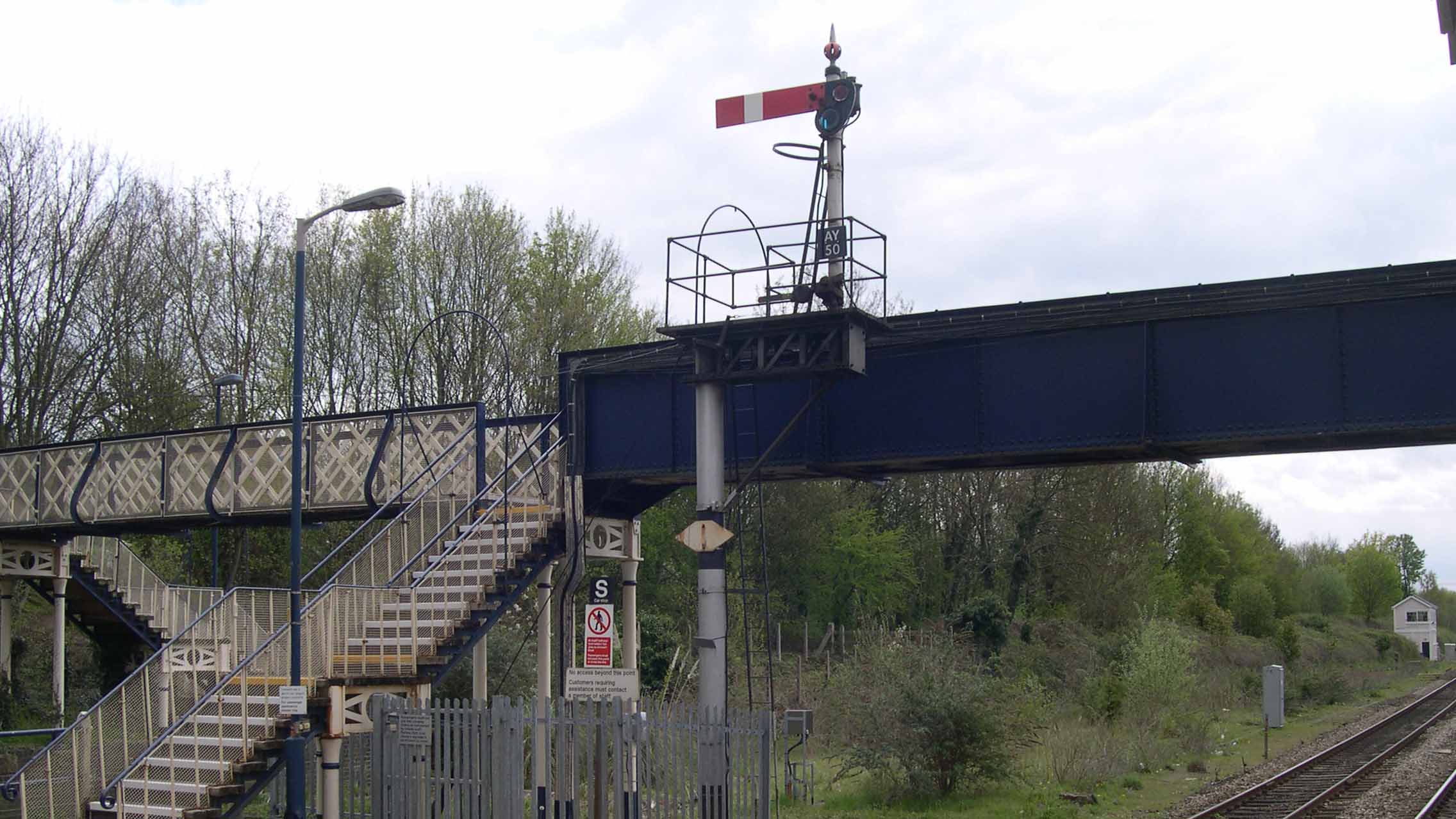 Figure 2. A typical GWR style semaphore home signal on the end of the up platform at Abergavenny in 2006. The timber built signal box/interlocking tower is in the distance. The GWR favoured the lower quadrant style where the signal arm falls away at 60 degrees from the horizontal. The home signal can be thought of as the traffic light stop/go signal. July 2014. 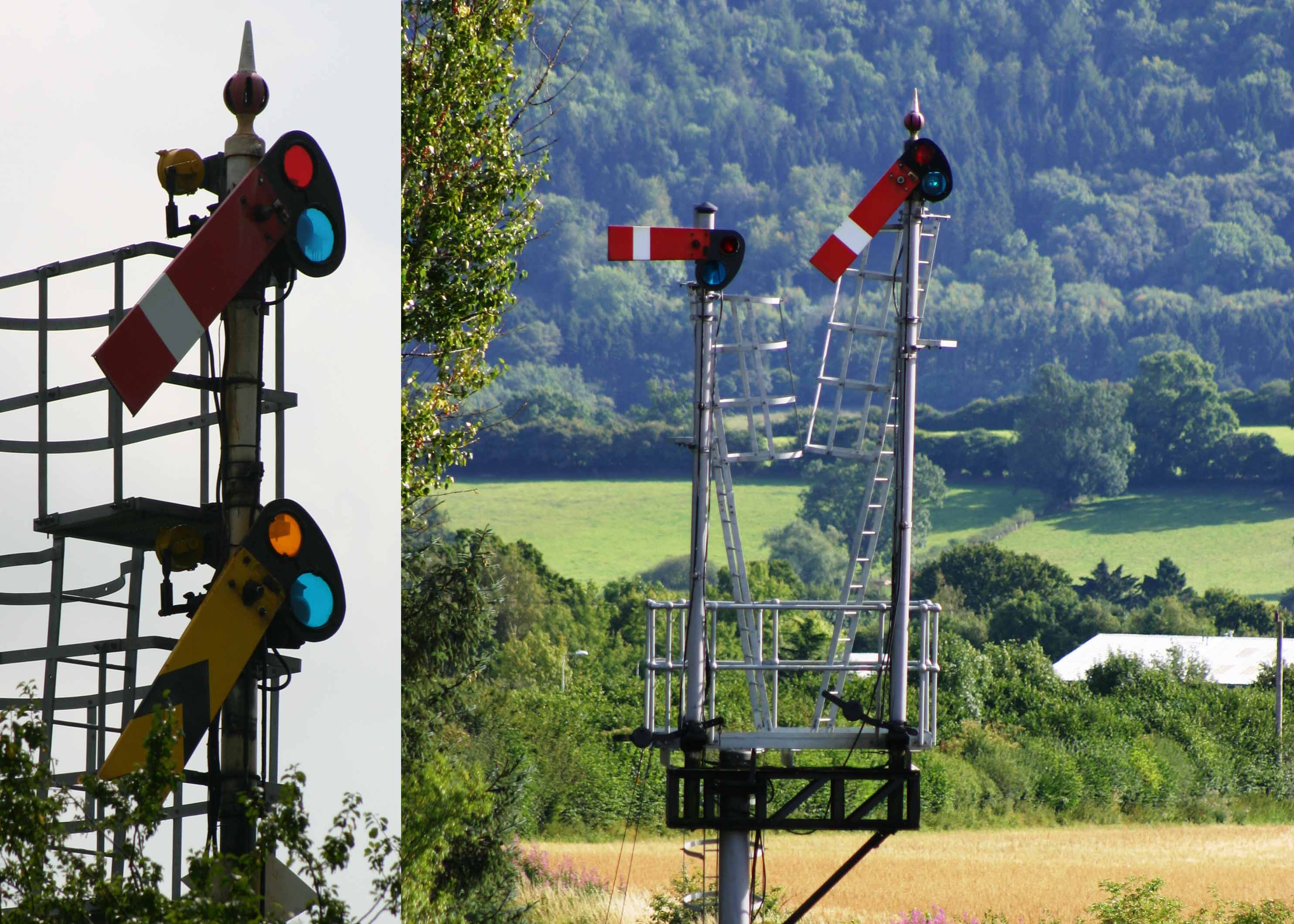 Figure 4 (above, right). Where tracks diverge there is a bracket signal as shown here at Craven Arms on the Shrewsbury to Hereford line in July 2014. The signals themselves carry other messages. The shorter post means that a train will move more slowly into the goods loop and also the shorter arm suggests a non-passenger carrying left diverging track. The taller posts themselves are so a train driver can see the signals beyond a road bridge that crosses the railway. Sighting of signals is an important consideration and whilst the norm in Britain is to have signals on the left of the train that is going forwards they are sometimes placed on the right side of the tracks if a curve or other obstruction would make seeing the signal by the train driver difficult. July 2014. 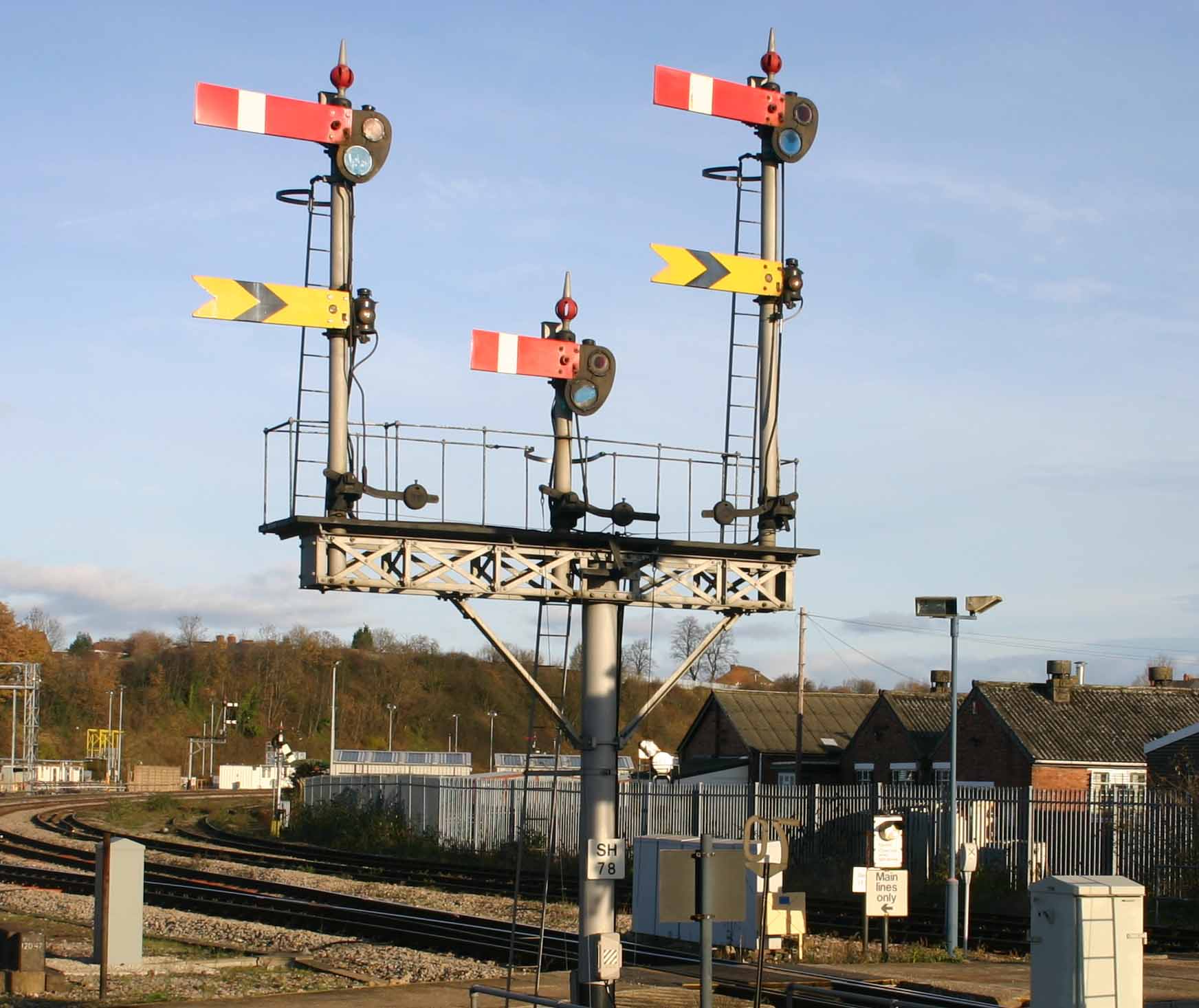 Figure 5. At stations and junctions the signalling story can get more complicated. This signal is at Worcester Shrub Hill station which is both. The tallest post indicating a higher speed than the others is for Droitwich and Birmingham, the short post for an engine servicing depot, a dead end, and the left post for Hereford. Both taller posts carry a fishtailed distant signal which is fixed at permanent caution as both tracks curve round sharply and the next home signals are not far away. November 2008. 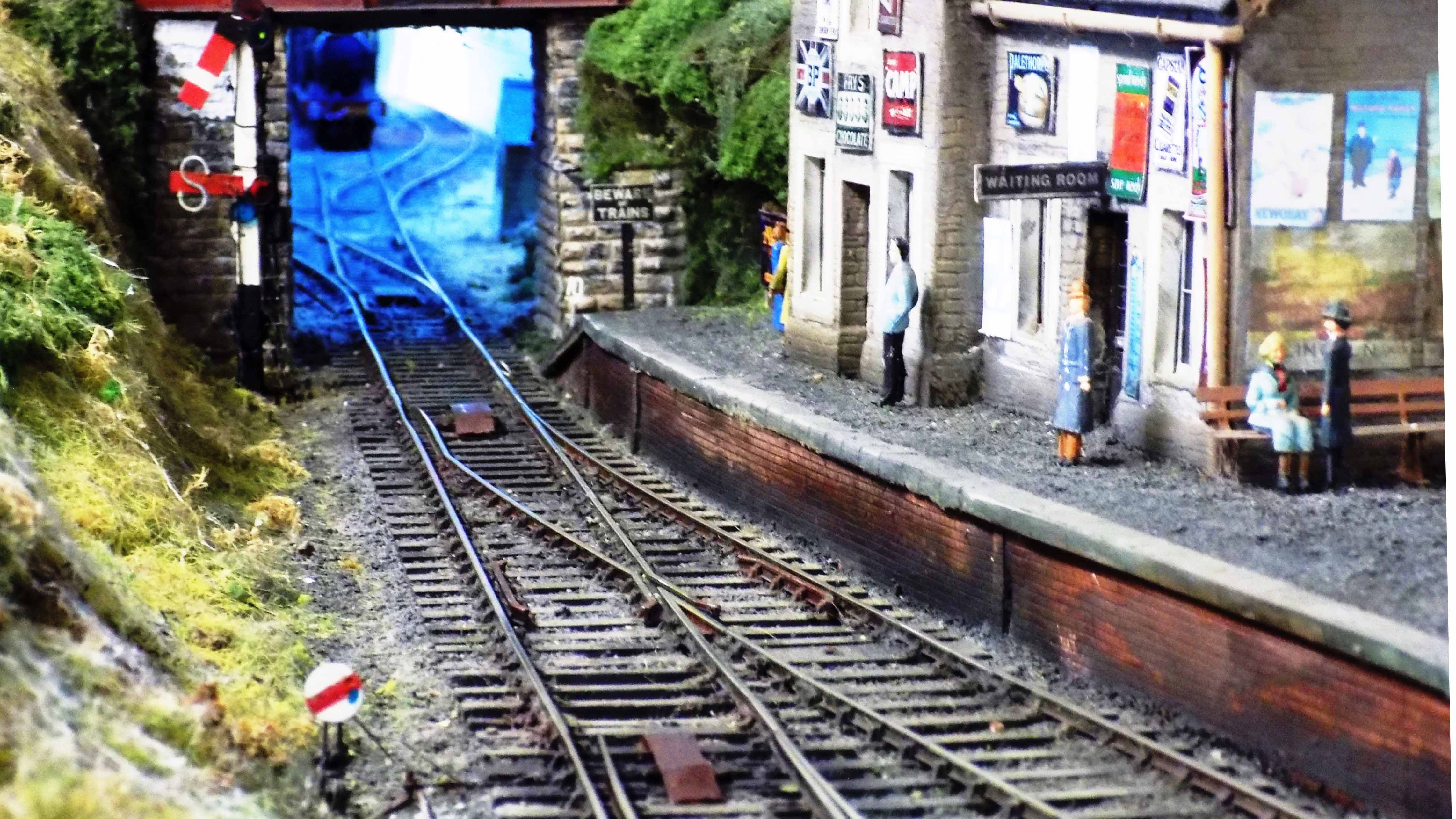 Figure 6. Meanwhile back on the model, from Brymbo East Junction station to Crowndale Halt and the carriage sidings. The signals on the post are, at the top, the starter home signal for the Crowndale Halt branch and the lower signal a shunt arm, hence the S, for the headshunt and carriage siding. This could have been a bracket signal but there was not enough room. It is accepted practice that the top signal refers to the far left road and then the next one down the next furthest left and so on. The record is six signals on one post although only used in low speed areas. The whitewashed rectangle on the bridge was a popular sighting aid to the train driver. The ground signal points access out of the holding sidings but is a cheat as it is connected to the point/turnout tie-bar. In reality it would have its own signal wire and not be operated when a train was moving into the holding sidings. May 2020.

Figure 7. At Brymbo East Junction the layout of block instruments reflects the table that was outlined at the start of this piece. The block bells tap out the codes as stated in the table and the status of a piece of track in terms of whether a train is there or not is reflected on the taller instruments by the receiving operator and reflected back on the sender’s instrument so everyone knows where they are. The default position, as shown, is Line Blocked where no train can run. Upon acceptance by the receiving instrument, the signaller has to push the small button below the rotating switch to select Line Clear, such is the gravity of that action. Finally after receiving the train entering section bell code the signaller selects Train on Line. Every piece of single track line needs its own instruments so there are three sets at BEJ. The far left set with the Mushroom bell is Crowndale Halt, the middle set with the cow bell is the Great Central (LNER) branchline to Plas Power and the right hand side with the church bell is the GWR branchline to Wrexham General station. Operation of this equipment makes the model railway operate as the real railway. November 2019. 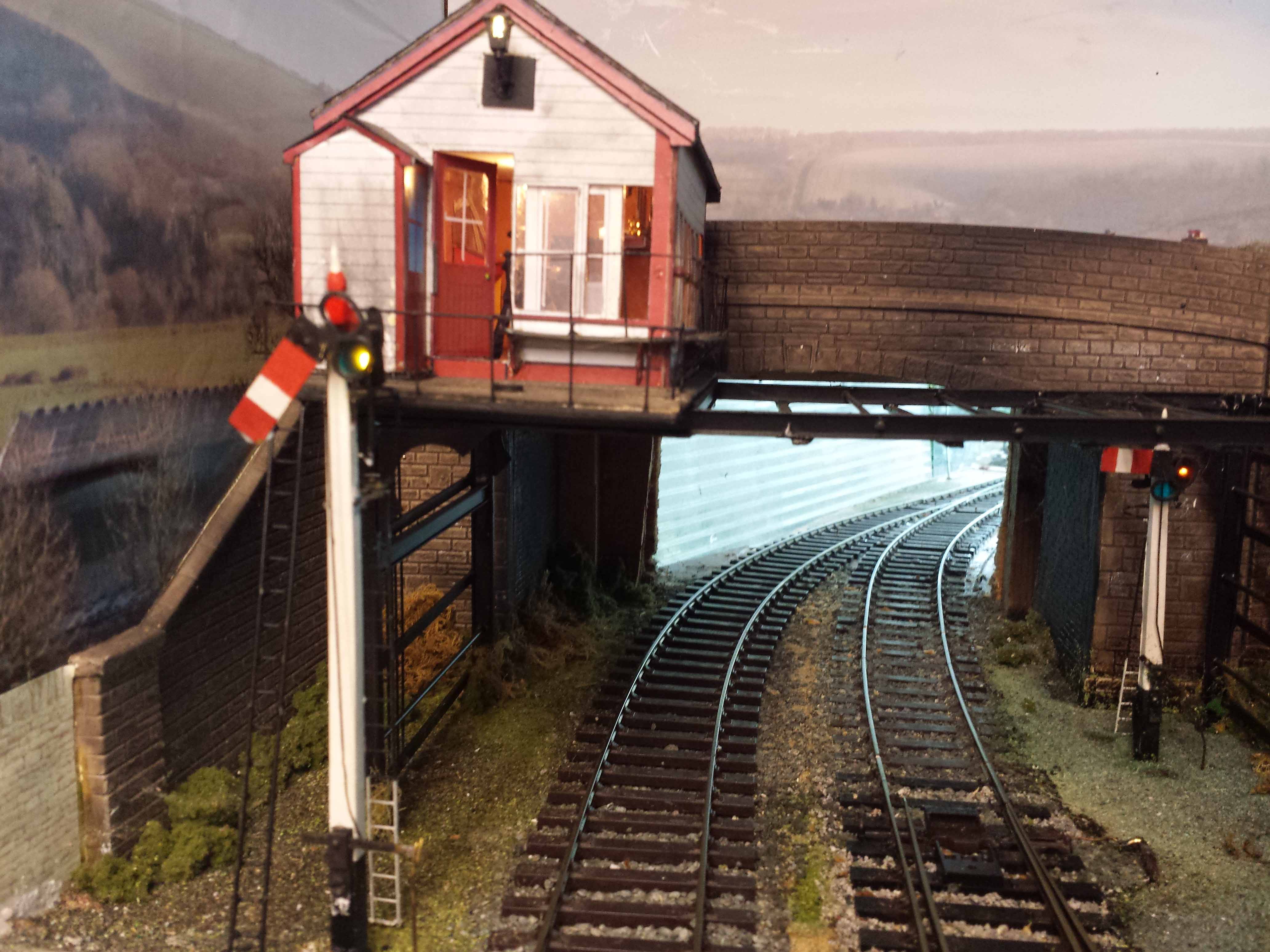 Figure 8. Crowndale halt is at the end of a joint branch-line between the GWR and the London and North Western Railway who were, in 1923, to become the London Midland and Scottish Railway. The GWR stayed much as it had been since 1835, partially responsible for its popularity now. This means that here we have GWR signals and an LNWR signal box/tower. The signal lights are 1.8 mm Light Emitting Diodes that need a supply of about 2 volts DC. The original oil lamps had a yellow glow so the ‘GO’ lens is blue to give a green light and this has been modelled. The tall signal is for the passenger carrying platform line and the smaller signal for non-passenger carrying trains including empty stock coaches. August 2015. 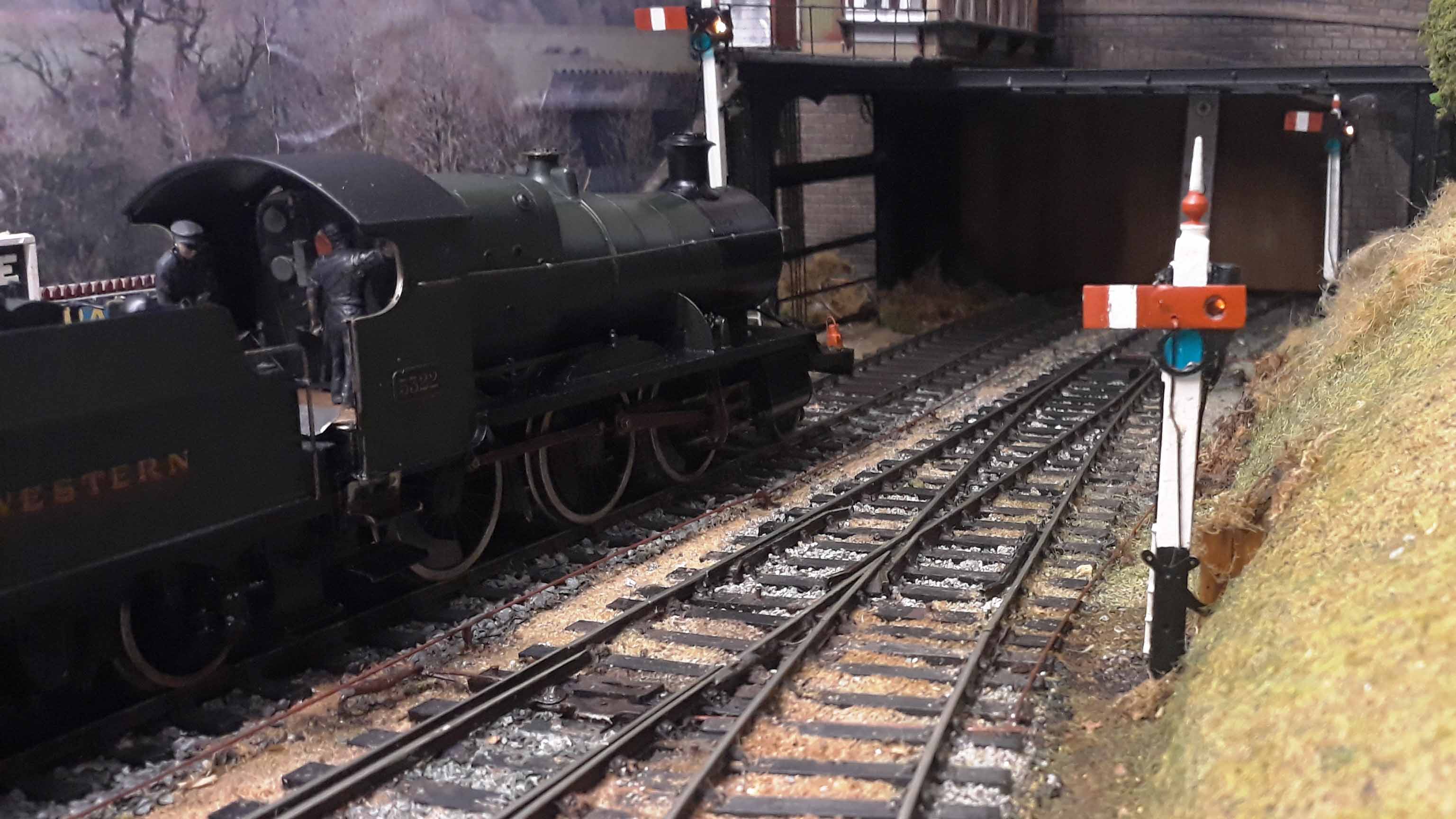 Figure 9. The departure line for the pickup goods trains at Crowndale Halt is protected by this pair of smaller armed signals. They are both on the ‘wrong side of the tracks’ for space reasons. Indeed the nearer signal has the centre balance arm which was used in cramped locations. Signals are interlocked with every point/turnout such that the road must be set first before any signals can be set to go. October 2020. 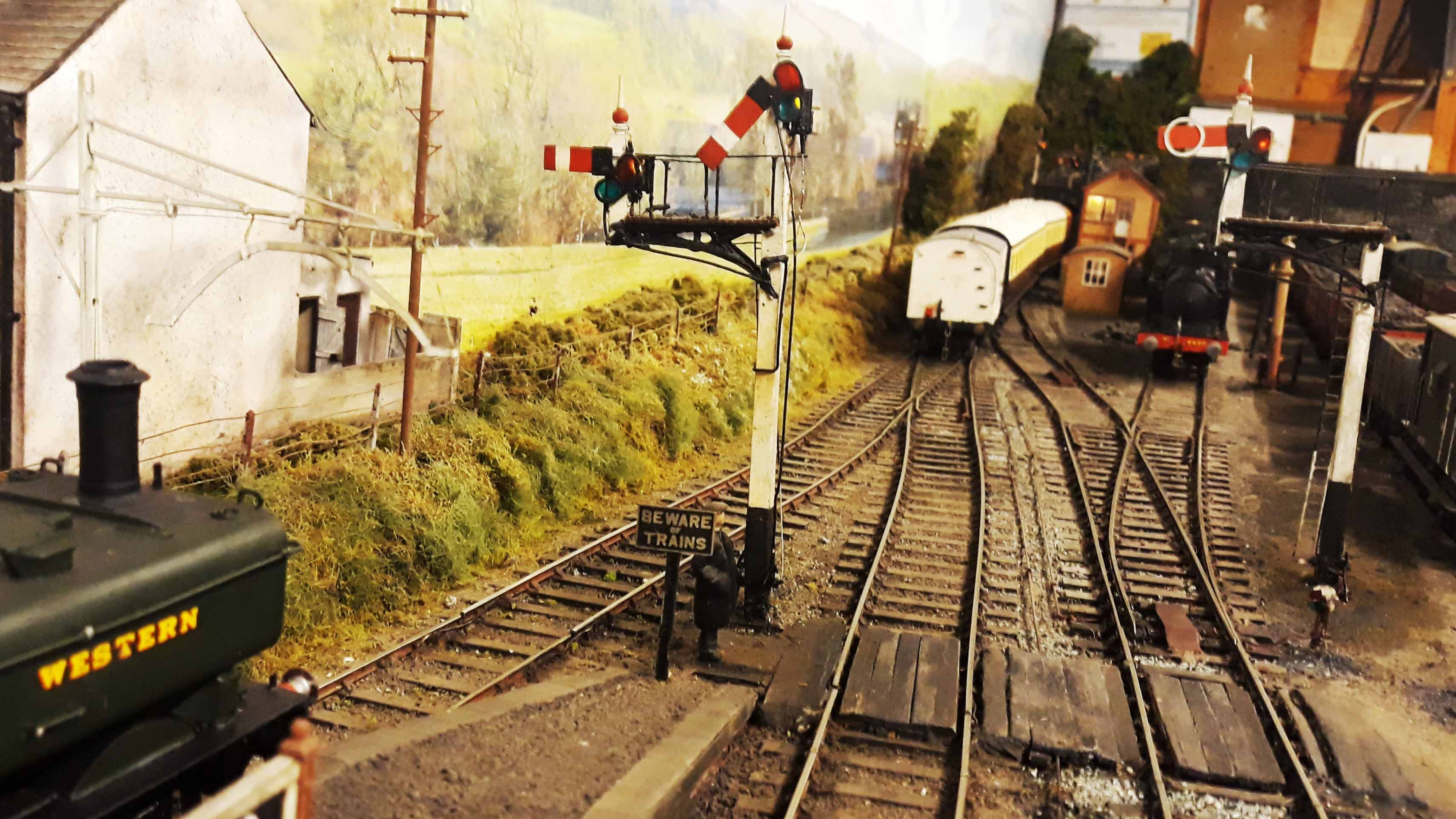 Figure 10. Back at Brymbo East Junction the local passenger train for Oswestry has been held at the bracket signal by the signal box/tower where the single line token is handed to the driver. After the driver has the token the signal for the Great Central branch can be set to go and the bracket signal on the platform can be replaced to danger. The bracket signal with the circle on the arm is known as a goods loop or siding signal, that is, non-passenger carrying. March 2021. 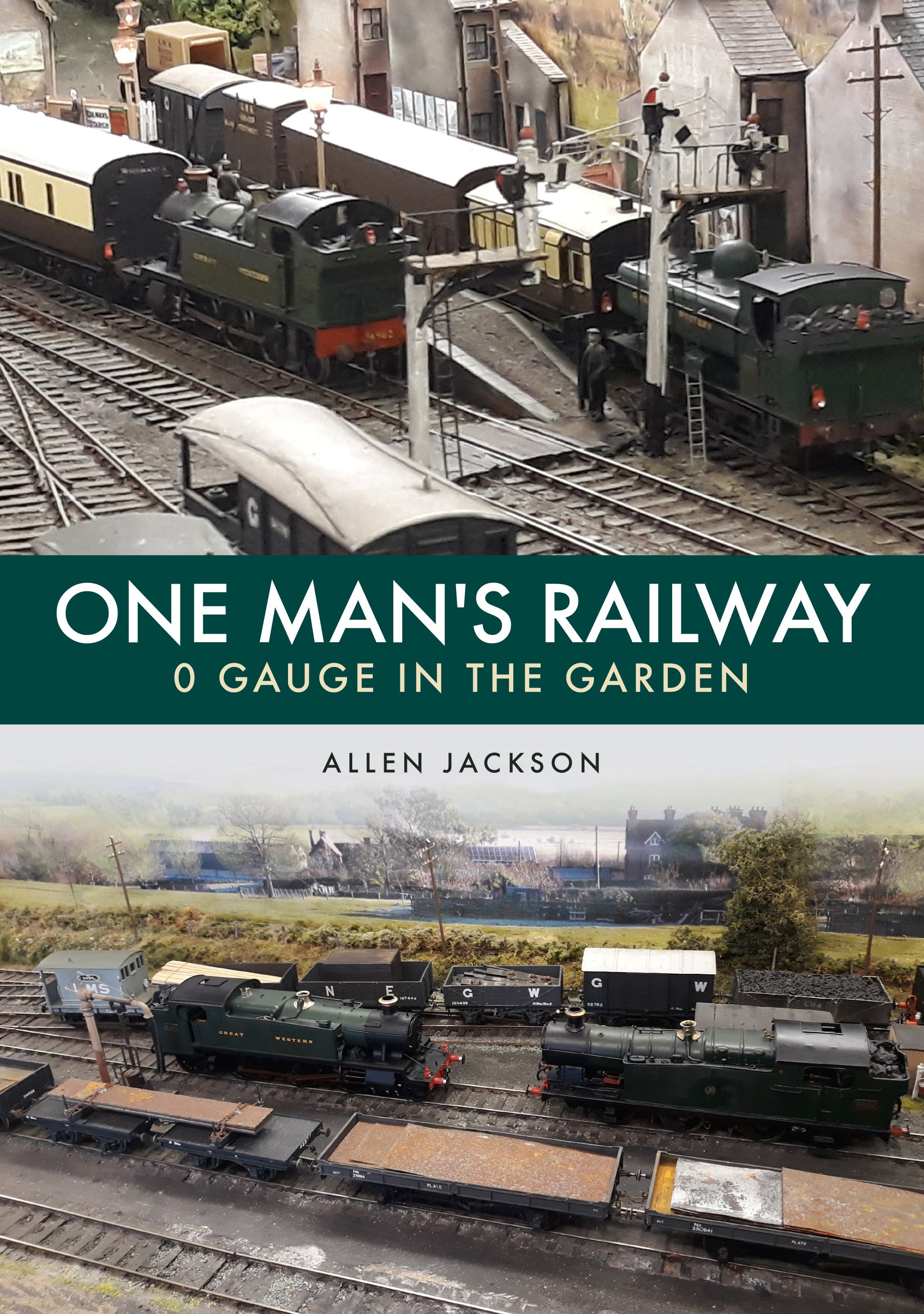 O Gauge in the Garden is available to buy through Amberley Books. https://www.amberley-books.com/one-man-s-railway-0-gauge-in-the-garden.html