It's easy to think that as Britain's railways have progressed into a modern era of electric traction and hybrid workings, that once-famed, picturesque locations have been diluted in terms of their railfanning potential. Of course the variety of steam and some diesel locomotives will never return to some lines, but the way in which many lines work now still offer fascinating glimpses into railway workings, social and industrial dynamics and a continuation of railway history.

One such place is the Scottish Highlands, where lengthy steam-hauled trains once took Victorian mountaineers, hunting parties and tourists across magnificent viaducts and through mountain passes. The Highland Mainline between Edinburgh and Inverness came in the mid-19th century, with the sections relevant here built during the 1860s and 1890s. Today, the landscape remains much the same and many of the impressive stations and viaducts intact, but even though the traction has altered, there is still much to be admired. Most of the line still uses semaphore signalling and traditional signal boxes. The following selection of photographs were taken over a three day period between Kingussie, Aviemore and Inverness Stations. All photographs by Joe Rogers. 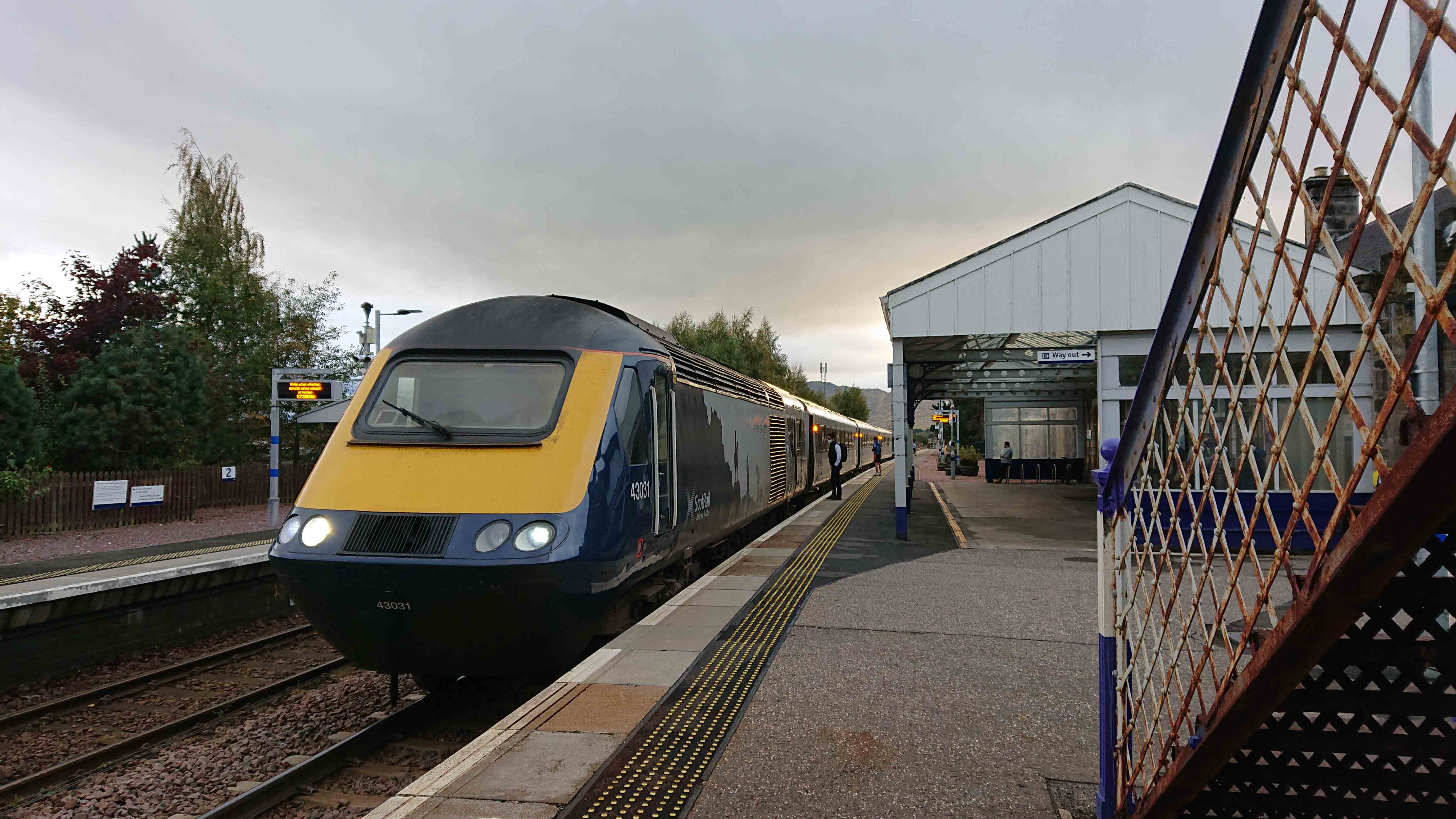 For railfans accustomed to the progression of high-speed rail in England, the sight of a regular Class 43-hauled HST might be a welcome nod to the past. In fact most of the ScotRail Inter7City services between Glasgow and Inverness are formed of former GWR HST trains, modernised with automatic doors and new livery. Here no.43031 waits to depart Kingussie (Gaelic: Ceann a' Ghiùthsaich). 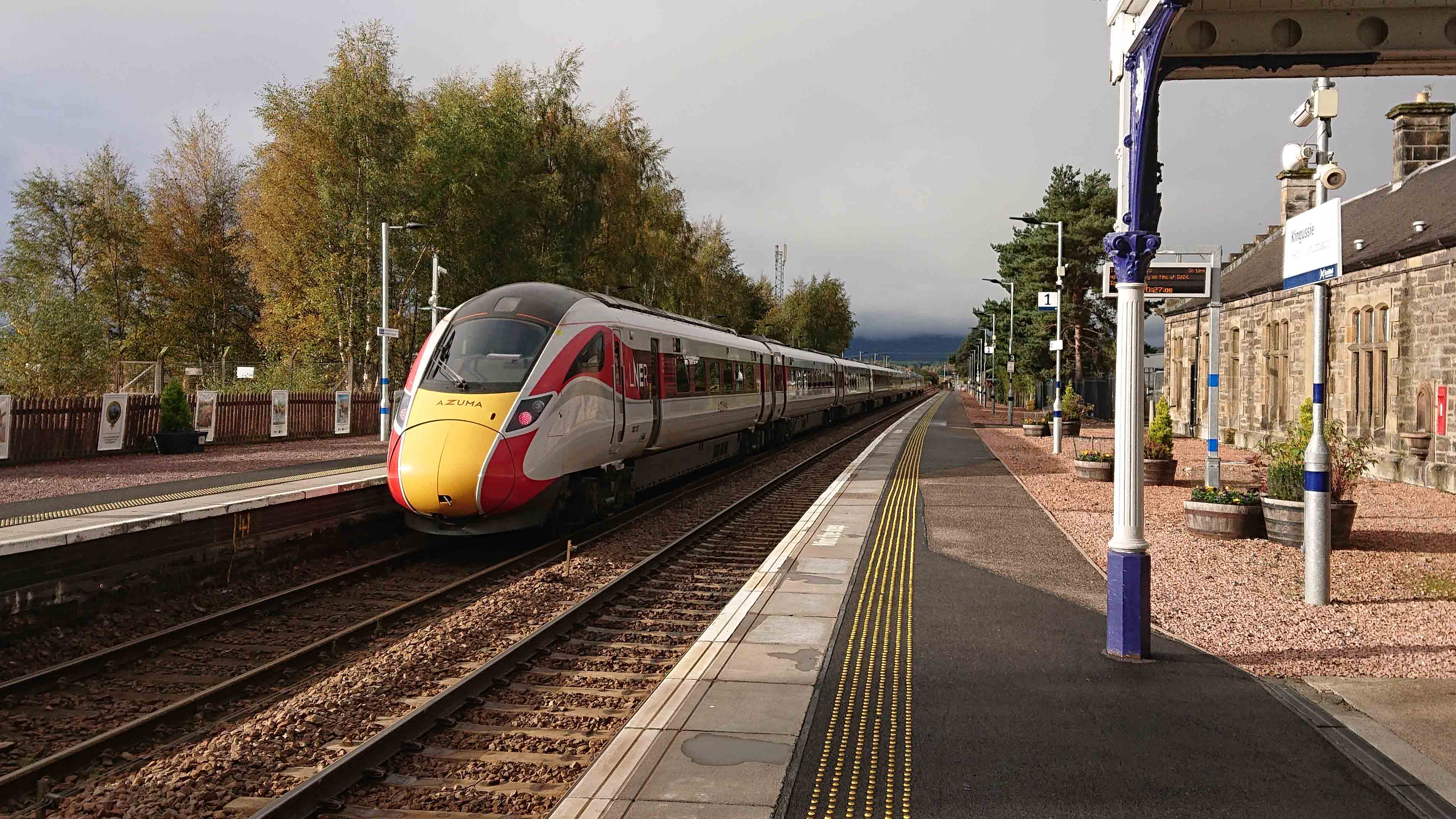 That's not to say that the modern railway is forgotten altogether. LNER run an occasional Class 800 service through to Inverness. This particular example is seen passing Kingussie, heading south during an Empty Coaching Stock (or ECS) movement. 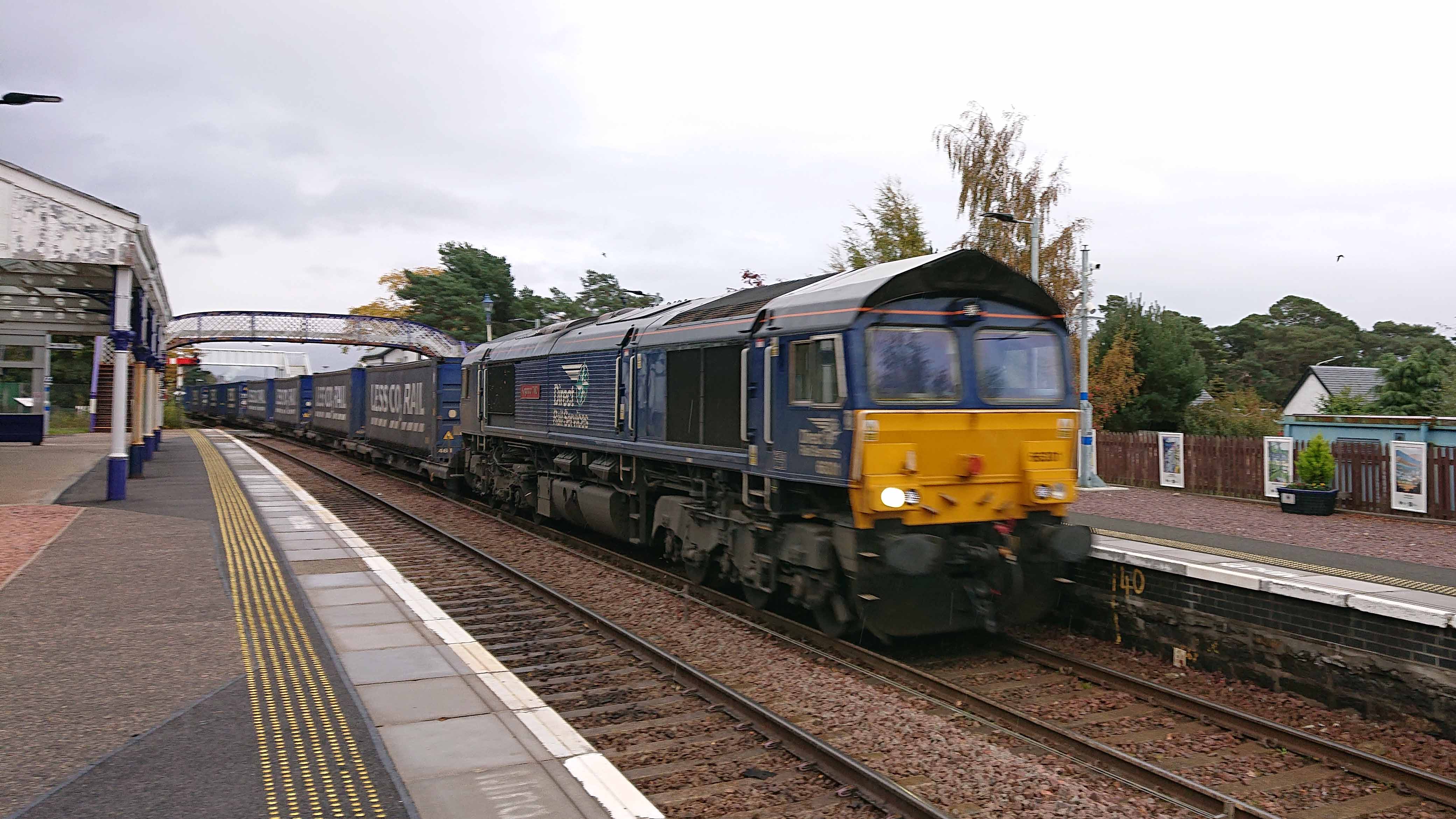 On what is otherwise an isolated and rural line, railfans can see plenty of traffic, both passenger and freight, owing to large cities and coastal ports at either end of the Highland Mainline. Direct Rail Services Class 66 no.66301 'Kingmoor TMD' passes at speed through Kingussie heading a Tesco freight service from Inverness Freight sidings to Mossend Yard. 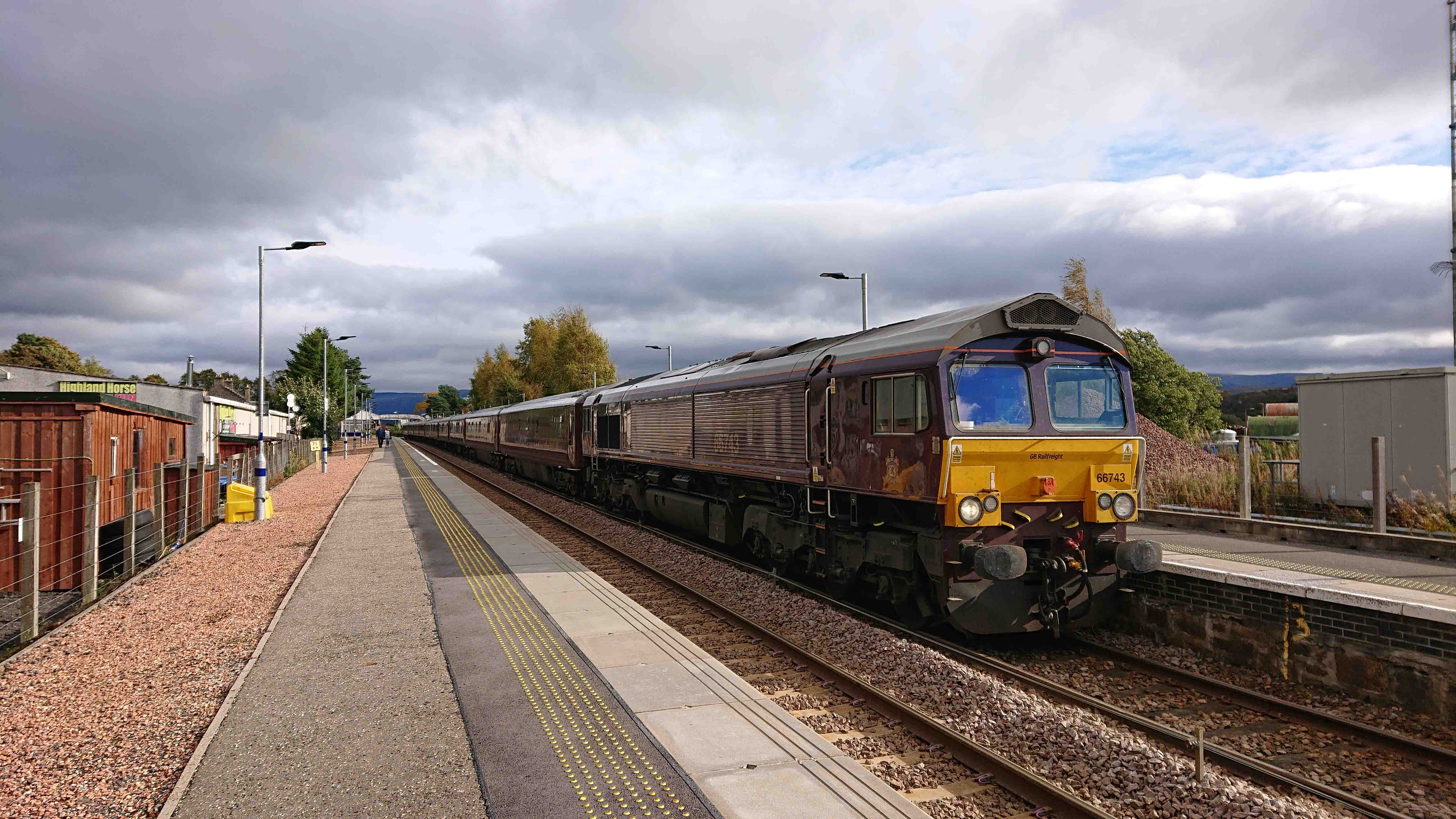 Outside of railtours, the Class 66 is not widely known as a passenger-hauling locomotive, but the Scottish Highlands see them working some special services. The Belmond Royal Scotsman (not to be confused with the famous steam-hauled Flying Scotsman) switched to Class 66 haulage in 2016 courtesy of two dedicated GBRf locomotives in a special Belmond livery. Here (above) no.66743 waits to depart Kingussie whilst passengers enjoy fine dining and staff work to maintain the highest standards. Observation Car 99965 'Snipe' (below) affords breathtaking views of the Cairngorm Mountains. 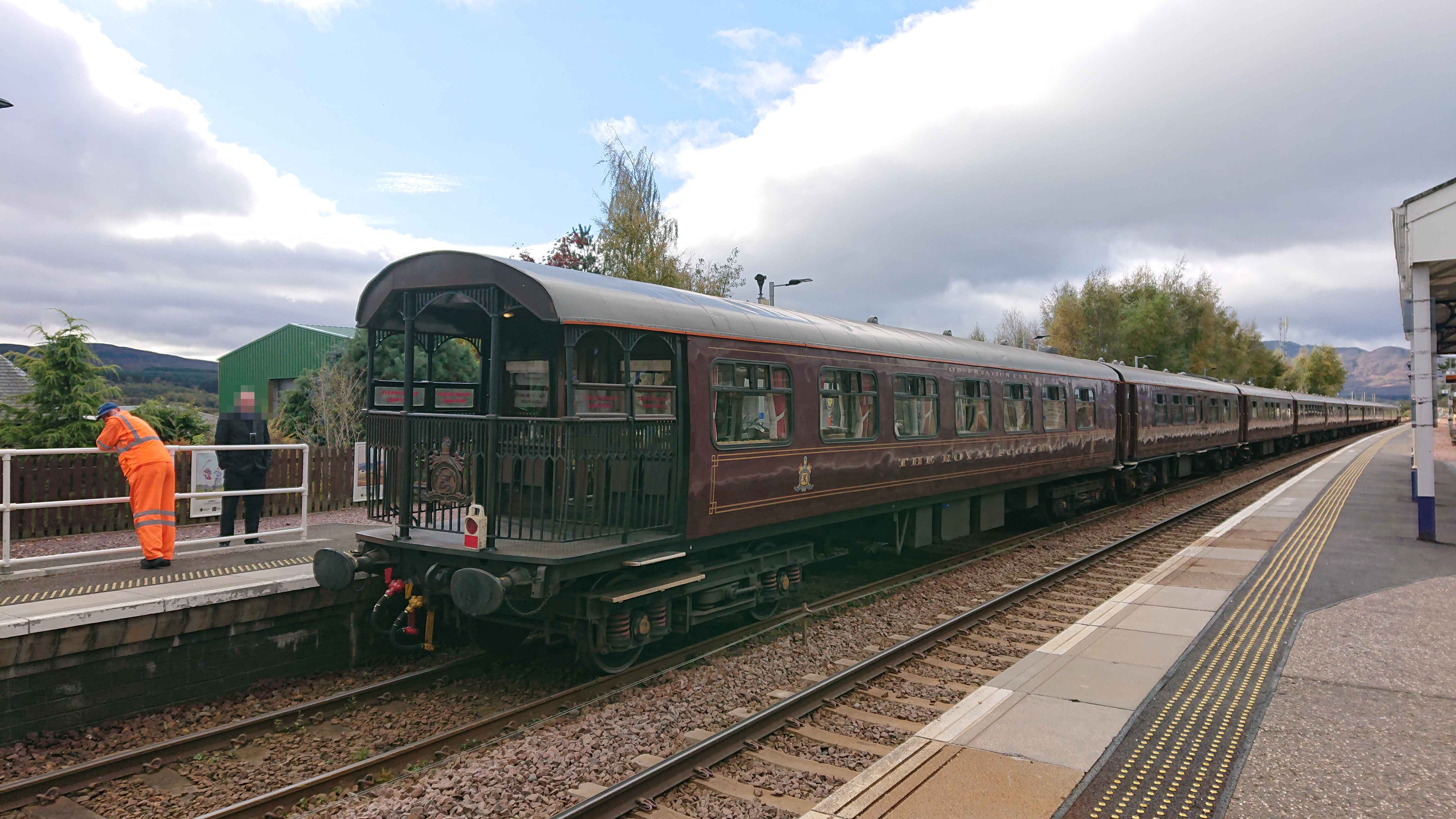 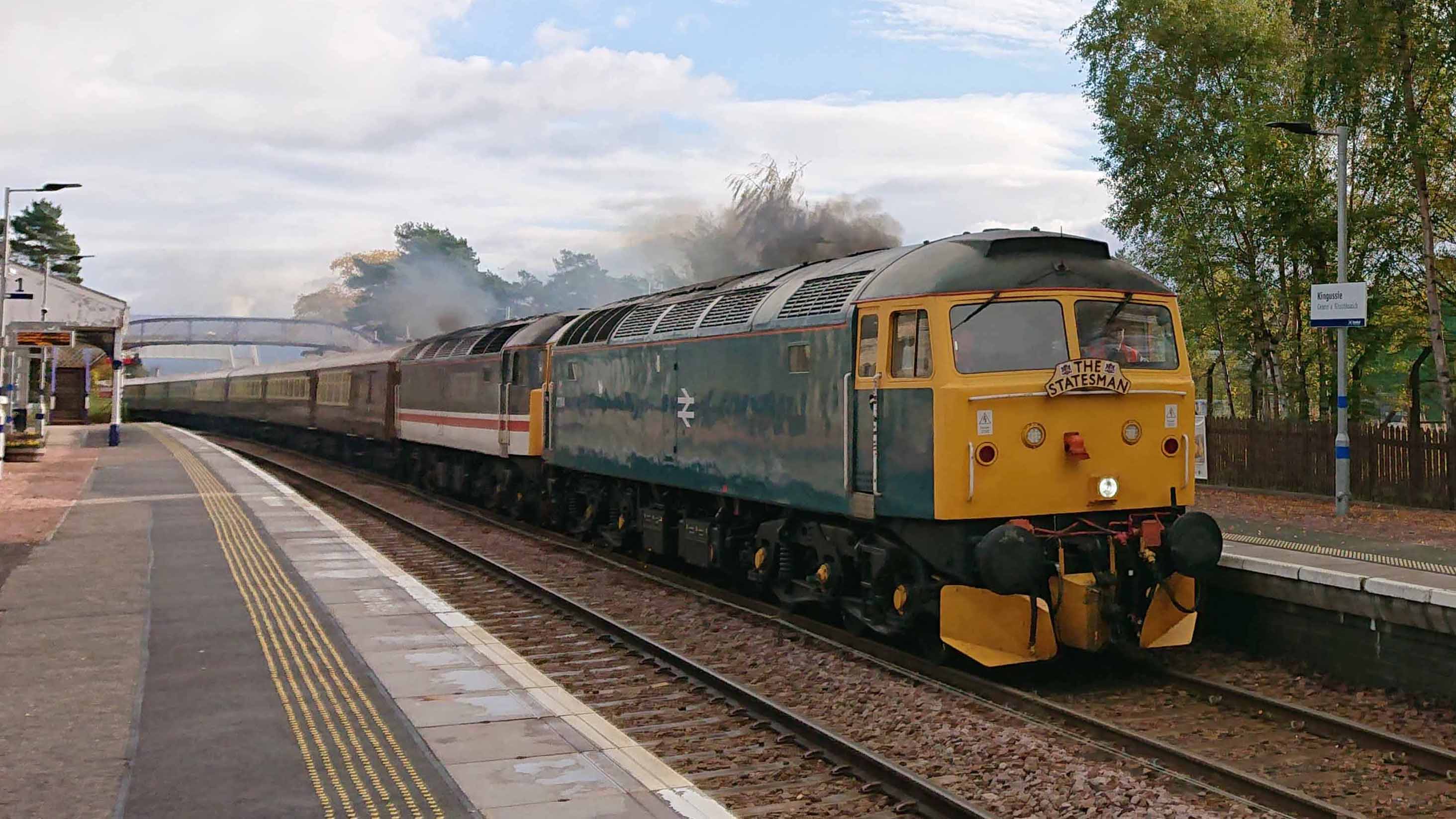 Another luxury railtour, this time the Lord of the Isles Statesman, thrashes through Kingussie with two Class 47 locomotives. Leading is no.47853 (carrying the number 47614) in BR Blue livery and behind is no.47828 in InterCity Swallow livery. This was Day 3 of 3 of the tour travelling from Inverness to Leicester, in England. 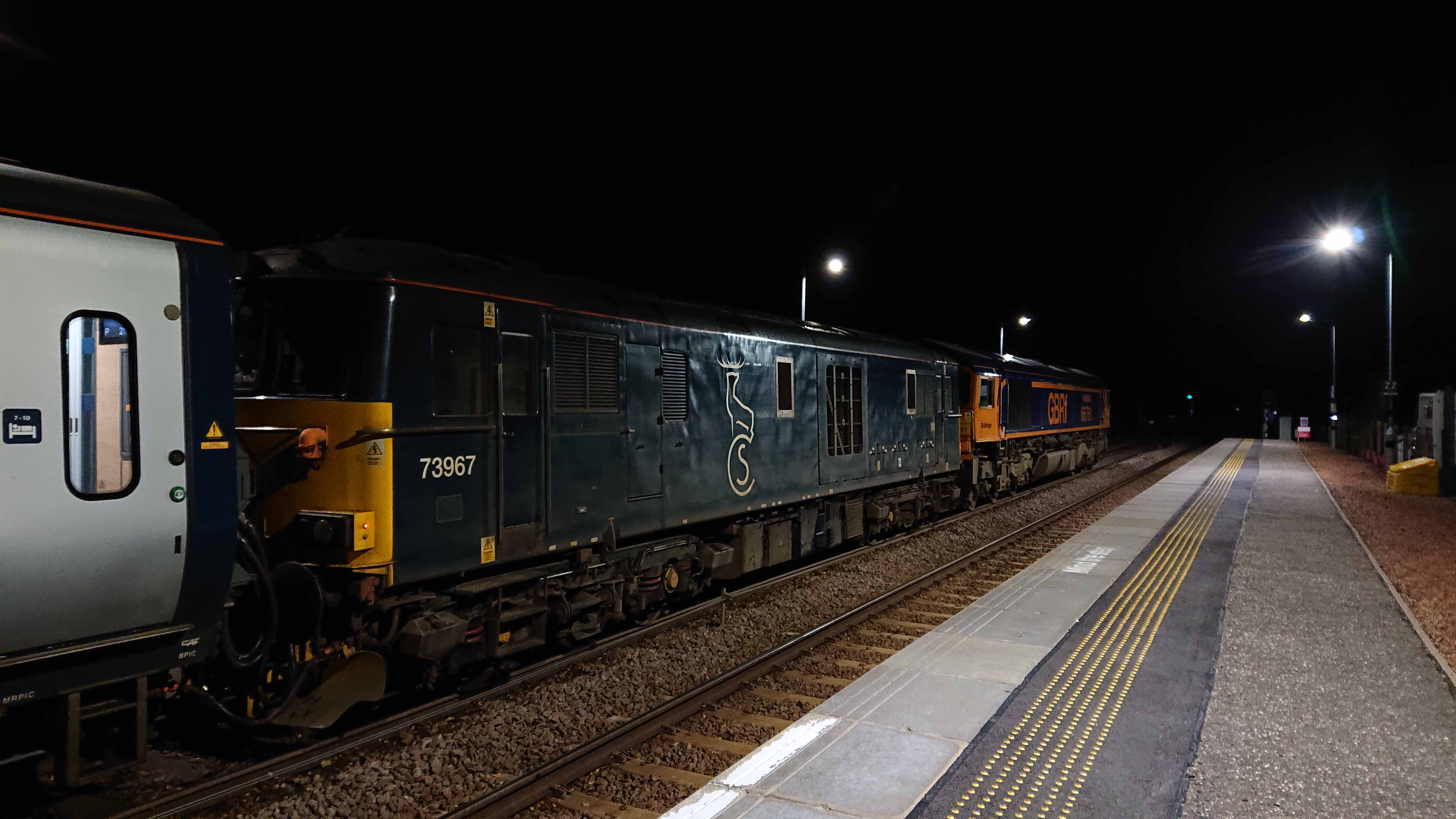 Class 73 locomotives, despite stemming from the 1960s, are some of the most versatile units on the British network, being able to run under diesel power and third-rail electric. Here, no.73967 performs generator duty behind GBRf Class 66 no.66737 'Lesia' for the Caledonian Sleeper service to London Euston - a regular night-time fixture on Scottish railway lines. 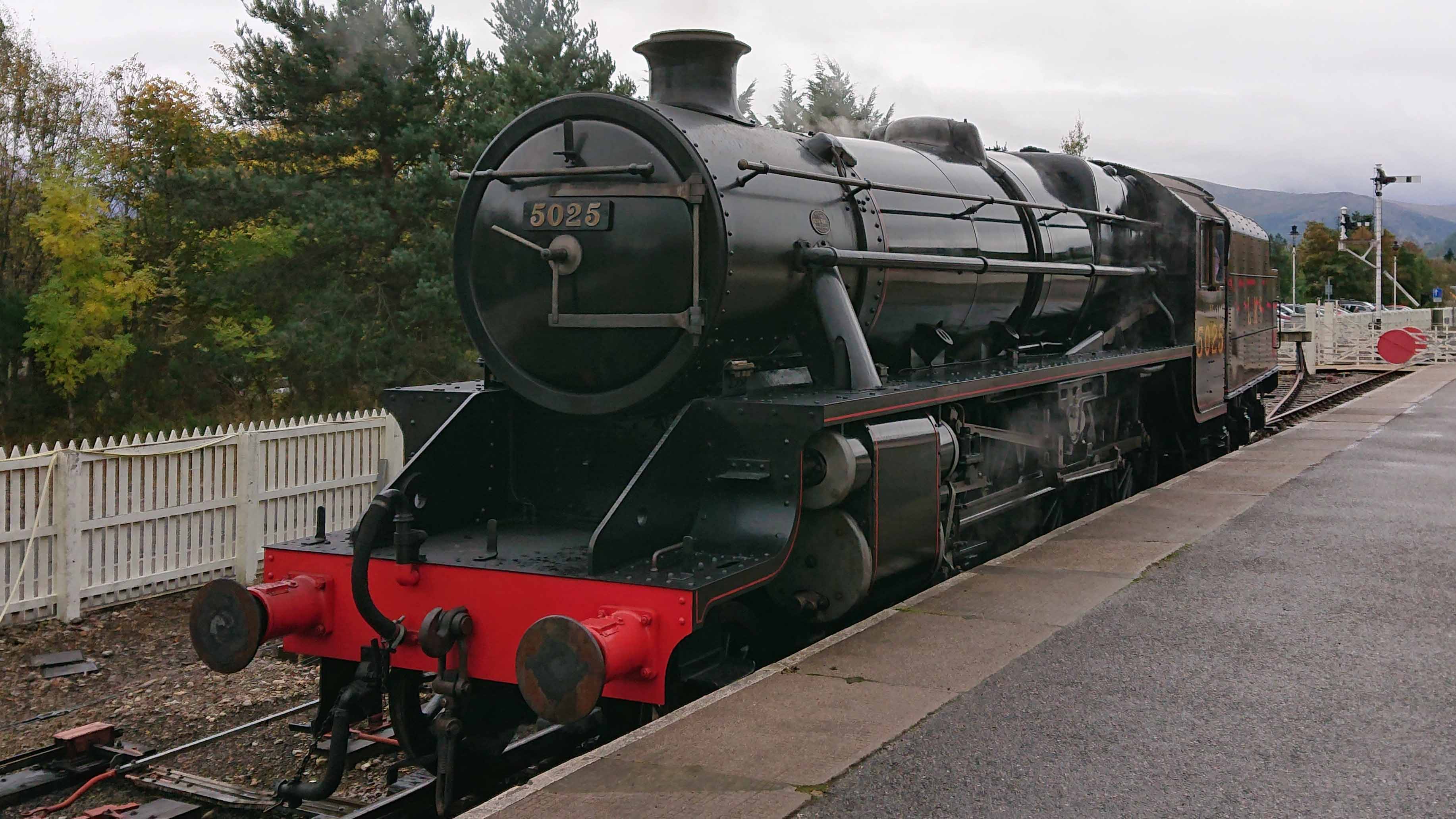 Further up the line lies the station at Aviemore (Gaelic: An Aghaidh Mhòr) where the line splits. The mainline carries on to Inverness with the western line now taking the Strathspey Heritage Railway to Broomhill, via Boat of Garten. An iconic LMS 'Black 5' no.5025 waits to run round at Aviemore, having recently come back into steam in May 2021. 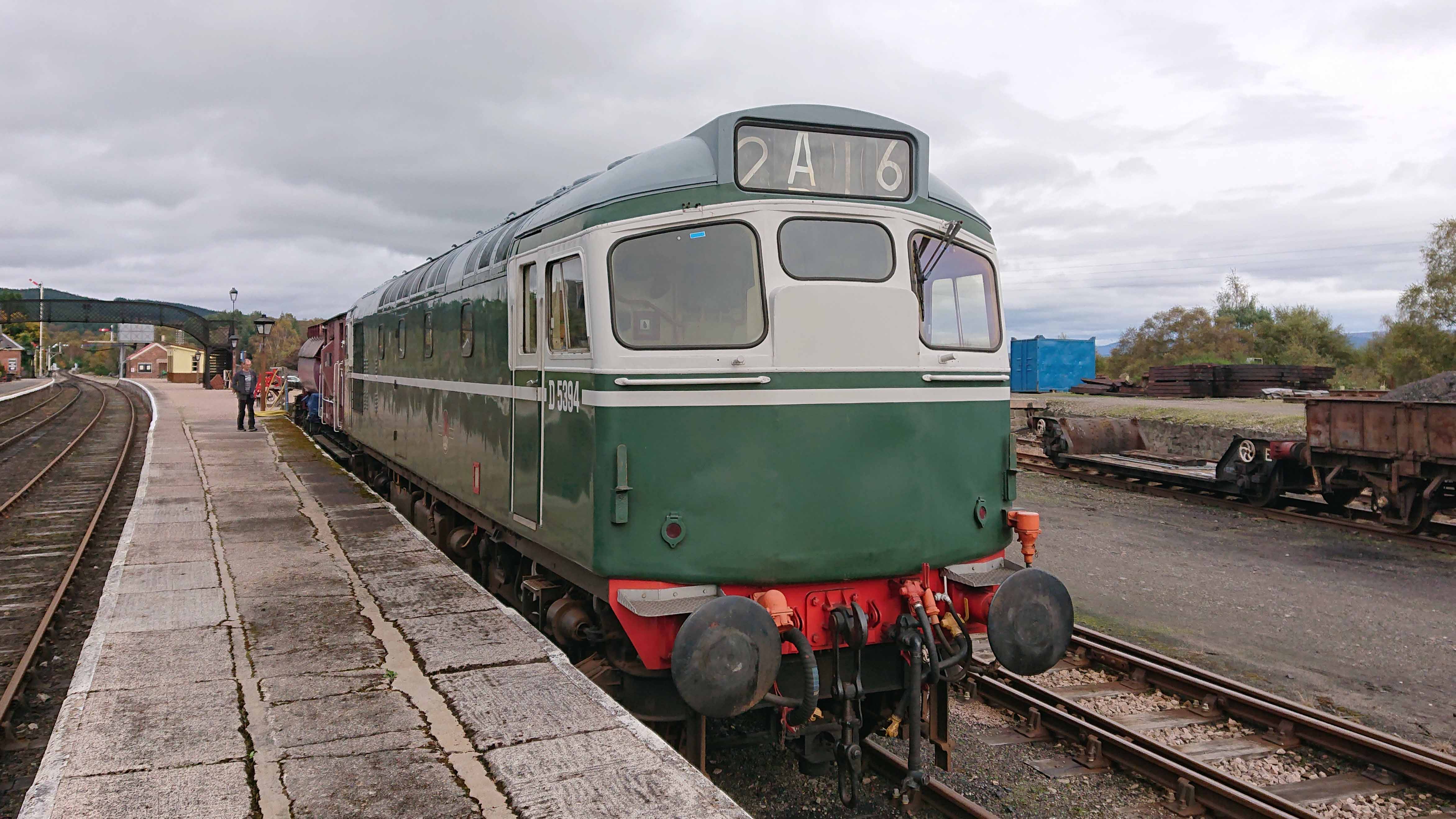 At Boat of Garten (Gaelic: Coit a' Ghartain), Strathspey's Class 27 locomotive D5394 is stabled. It was built in Smethwick, England in 1962 but moved to Scotland in 1969 where it worked passenger and freight services until 1985. 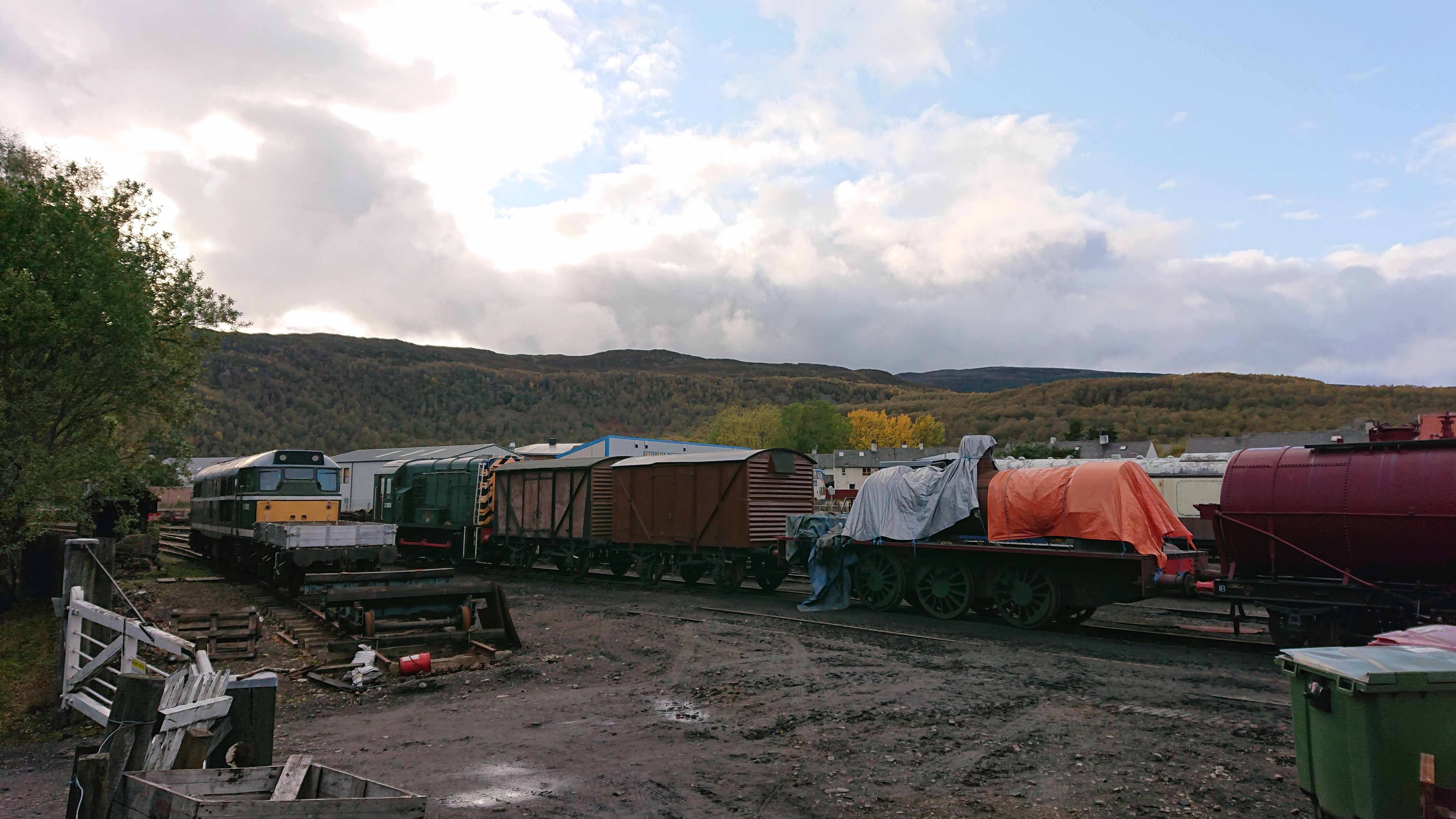 With the backdrop of the woods below the Craigellachie National Nature Reserve, Class 31 D5862 and Class 08 D3605 are stabled in the yard north of Aviemore station with a selection of stock and locomotive frames. 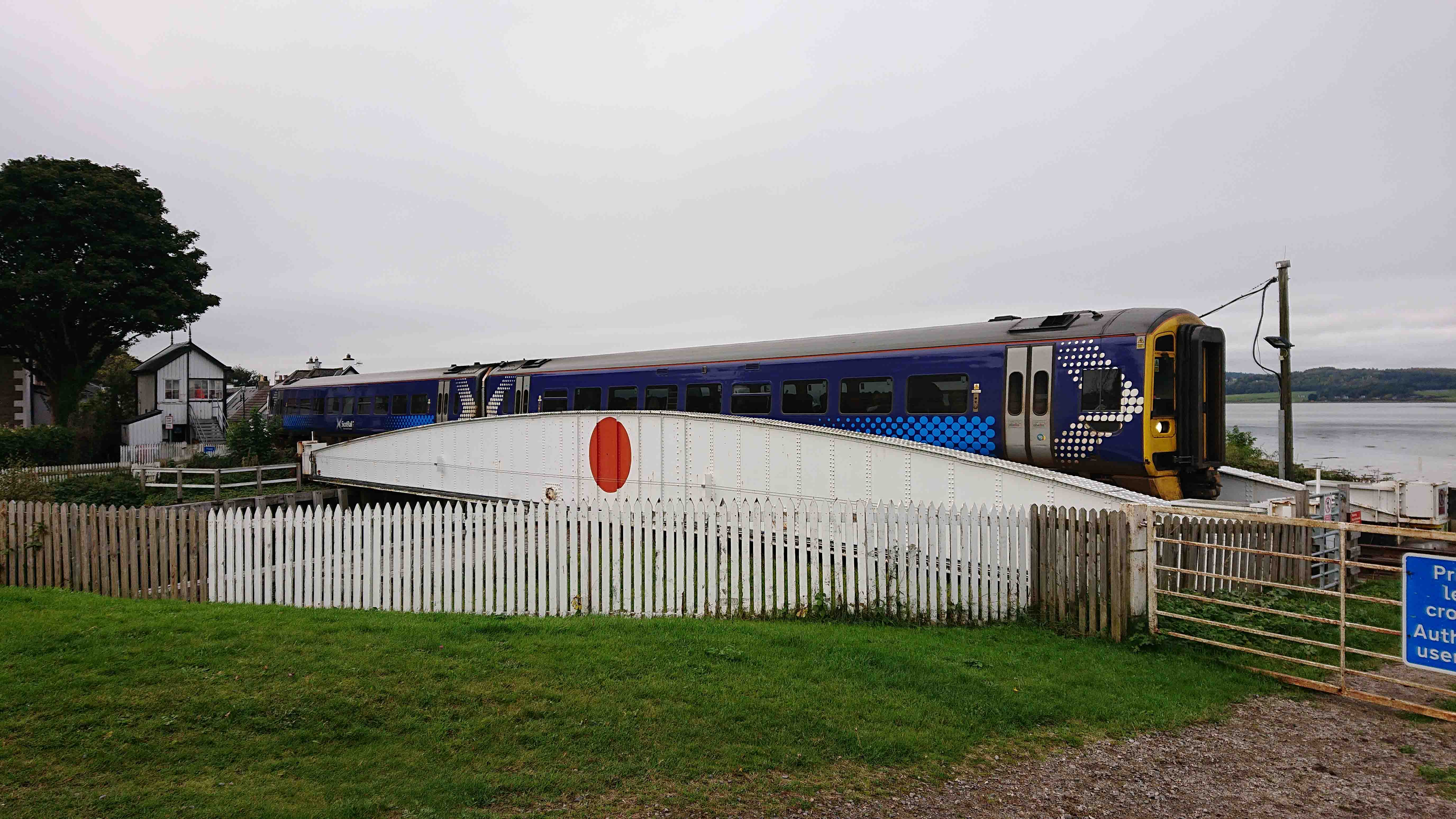 Further afield, Inverness (Gaelic: Inbhir Nis) is where most of the aforementioned services either originated or travelled to but even from there, trains continue along the Far North Line to Wick and Thurso, Britain's northernmost railway station, or on the Kyle of Lochalsh line. This impressive swing bridge across the Caledonian Canal at Clachnaharry is seen passed over by Class 158 no.158704 on its way back to Inverness from the Kyle of Lochalsh. 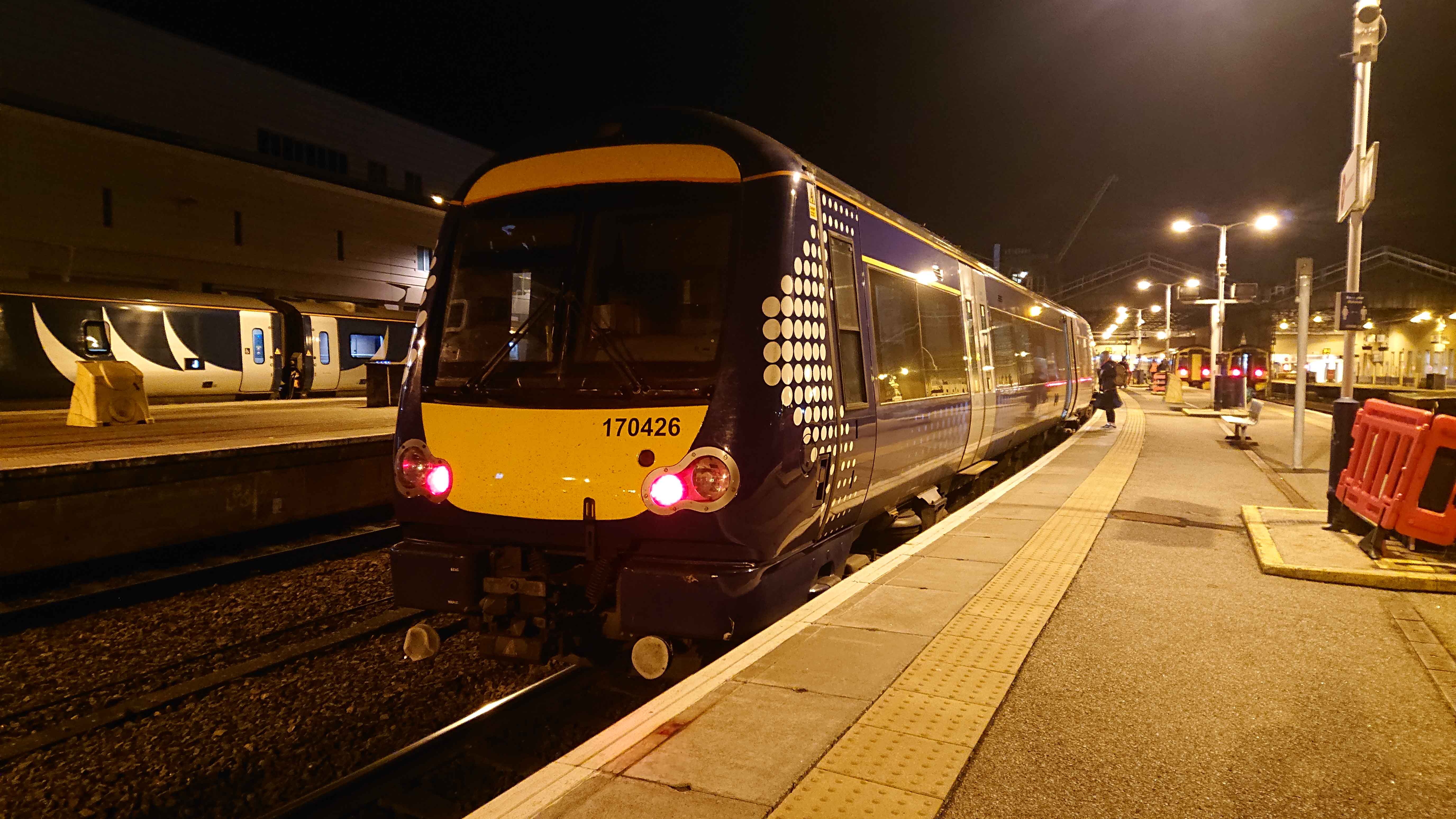 The frequency of local DMUs in Inverness resembles the normal services of most major British towns and cities. Class 170 'Turbostars' (above) sometimes run as hybrid units with a Class 158 (below) as they take commuters and tourists along the Scottish coast or across to the Western Highlands. 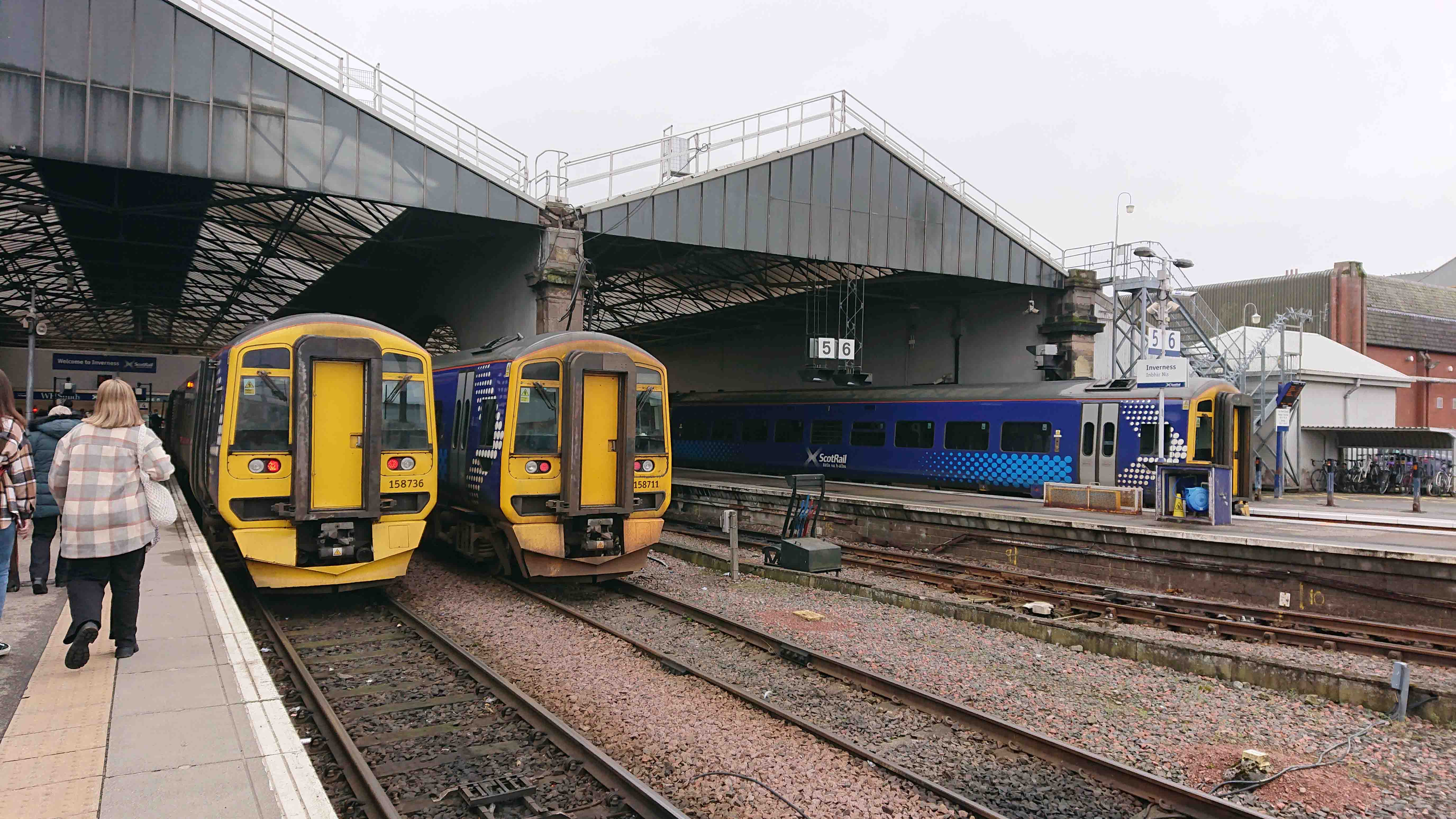