In part one of Modern British Freight I covered the historical aspects of how it all started off and how it got to where it now is.

In part two we look at some operational aspects of modern freight train workings in Britain.

All pictures by the author Allen Jackson.

Limestone – in part one mention was made of virtual quarries dotted about the Network Rail system which act as railheads for actual quarries for railway ballast. Whilst limestone is not used for ballast it has other uses.

Limestone is an essential ingredient of the steel and cement manufacturing industries and is mostly quarried in the Peak District of Derbyshire in the English Midlands. The Lime products are also used for everything from electricity generation, water treatment, and soil stabilisation, to the manufacture of plastics, paper and glass. Lime products are even added to chicken feed to provide a natural source of calcium, which is essential for egg production.

By Peak it means hills of the order of 1000-1500 feet so not up to the Rockies level of altitude but at these northern latitudes they can still be a bleak and unforgiving place to operate a railway. Limestone is quarried or hewn out of the landscape and then crushed and graded to be of certain dimensions so that it is suitable for the industry for which it is intended.

In a railway context the limestone is either a crushed stone or a powder or even a slurry with added water and is conveyed in either open wagons or bulk powder tanks that are filled or emptied using compressed air at the loading or discharge point. Slurry seems to be lower volume and use road haulage. 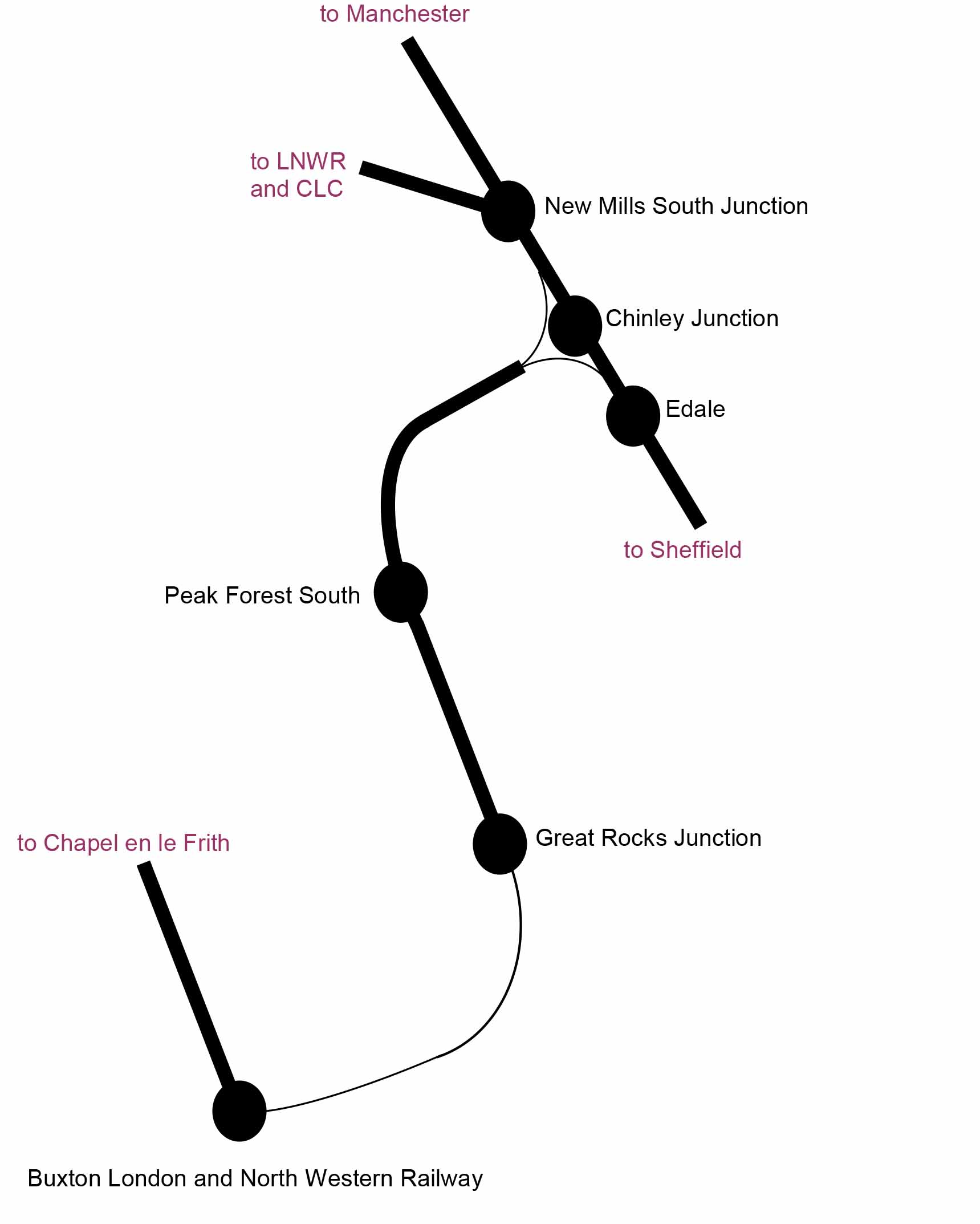 Figure 1. Is a map I’ve borrowed from the book A Contemporary Perspective on LMS Signalling Volume 1 to do with the section concerning the Midland Railway. The area we are interested in is the branch line from the main Manchester to Sheffield ‘Hope Valley’ line at Chinley Junction. The manual signal boxes at Peak Forest South and Great Rocks Junction still control a good deal of the limestone workings in this part of Derbyshire and also in the pictures is Earles Sidings signal box. 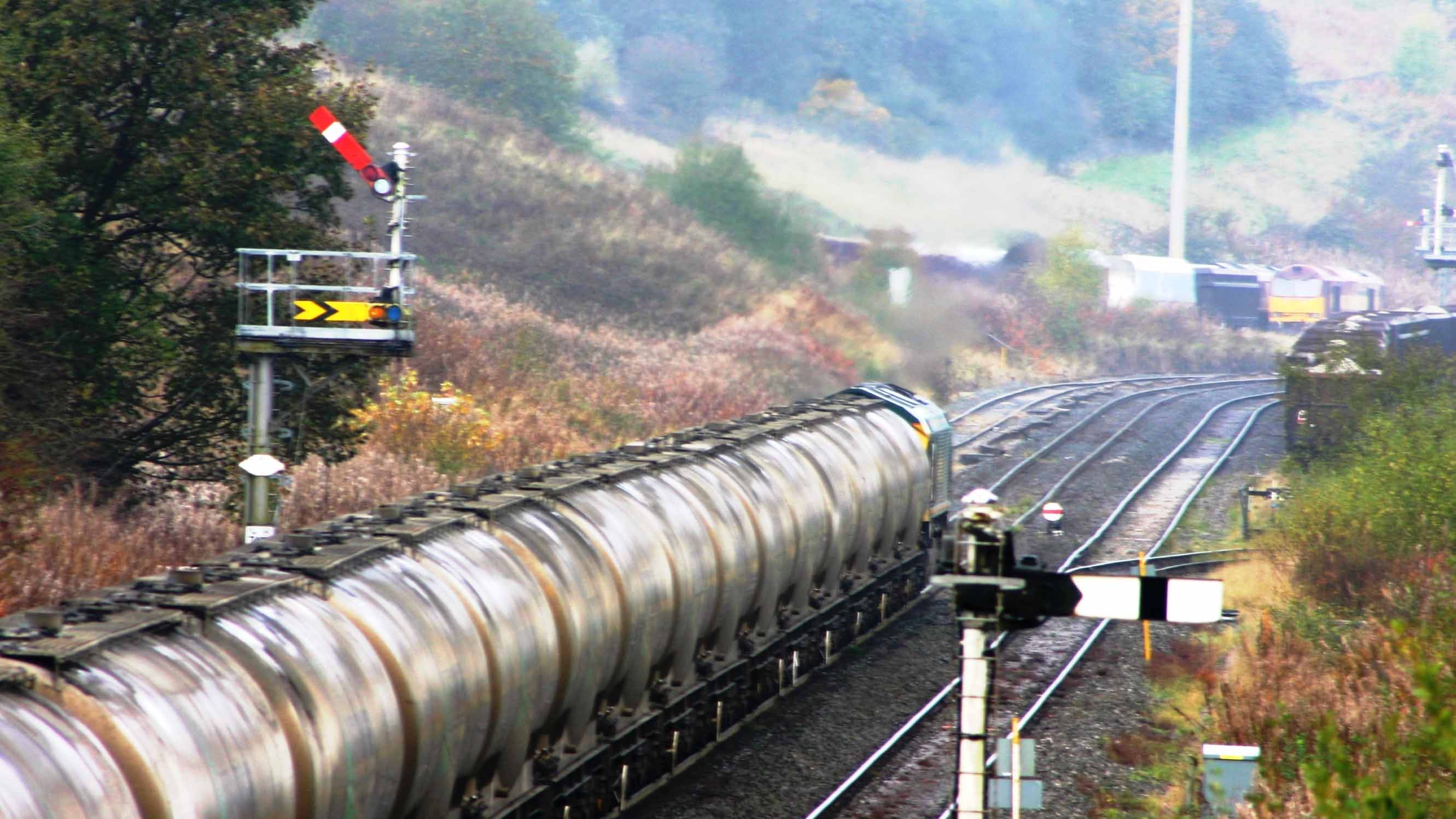 Figure 2. Freightliner class 66, 66613 heads about 1500 tons of limestone powder from Tarmac Tunstead quarry area past Great Rocks Junction signal box where the last truck will be up towards Peak Forest South and on to Chinley Junction and the customer. An EWS branded class 60, 60045 is visible in the distance but since the inception of DB Cargo these locos are not as commonplace. 60045 was sporting a steam era ‘40B’ shedplate which means it was allocated to Immingham in Lincolnshire so some way from its home depot. October 2014 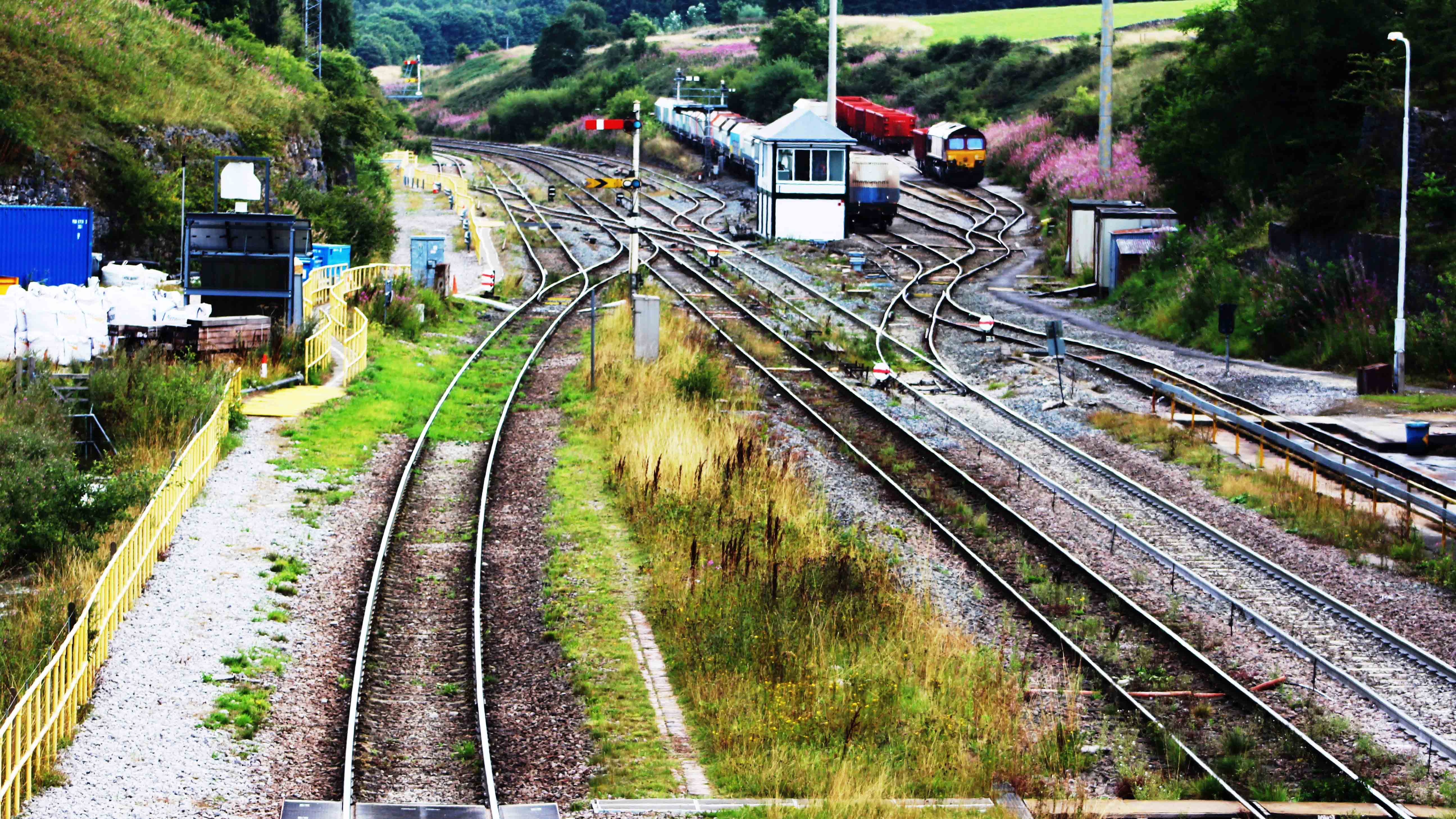 Figure 3. Some years later and looking back down the double tracked main line towards Great Rocks Junction but at Peak Forest South signal box. The class 66 in the sidings amongst the wagons is 66067 and the one on the extreme left hand edge of the picture is 66755 Tony Berkeley OBE RFG Chairman 1997-2018. The latter named is shunting a train of hoppers engaged in loading the wagons with limestone chippings from the Cemex quarry which is at the rear of the train. 25th August 2022. 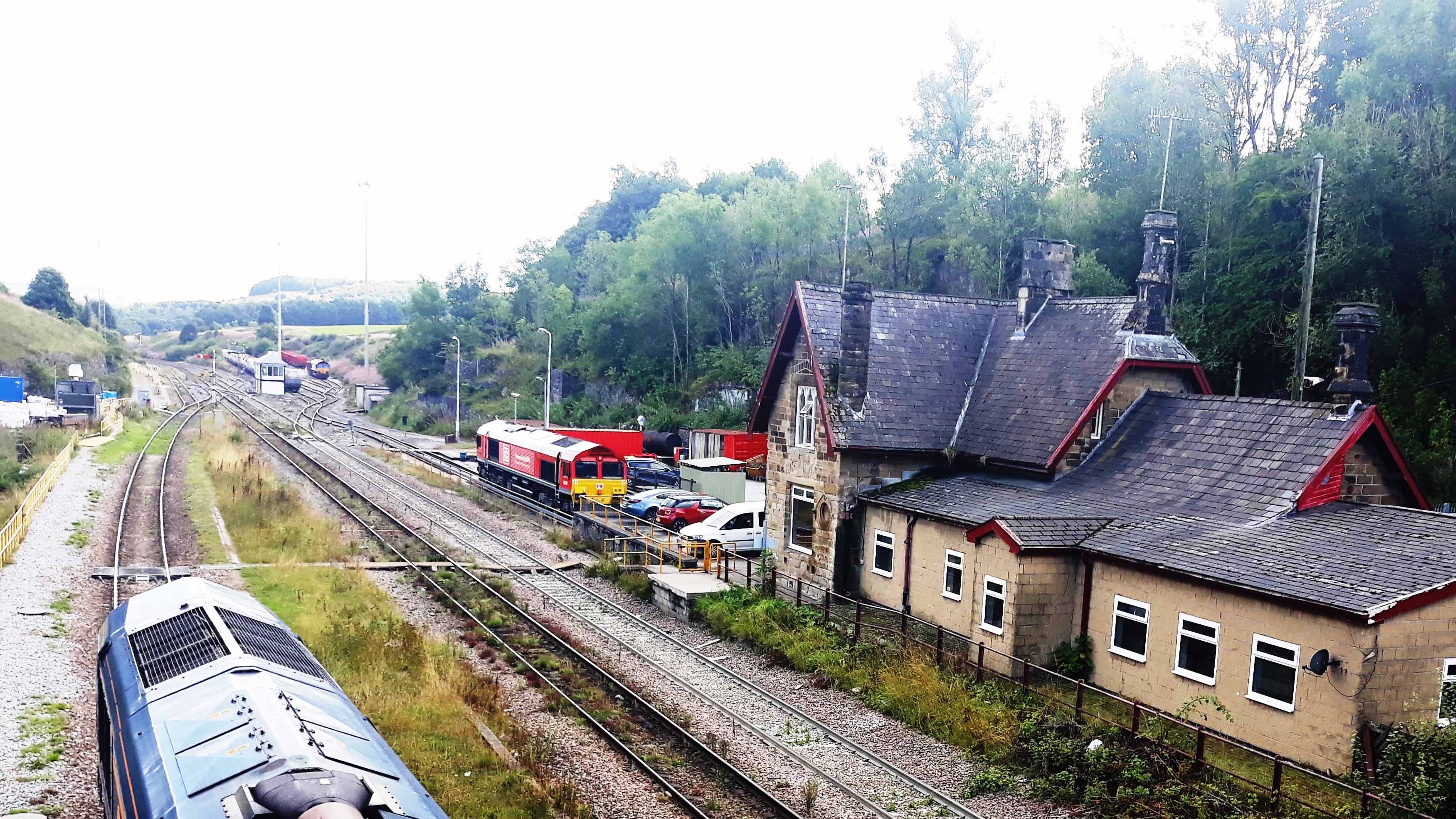 Figure 4. Pulling back on the focus reveals the layout at Peak Forest South and more of the roof of 66755 on the ironstone hopper wagons. Over to the right is a rarity of the modern freight scene, a locomotive servicing siding complete with concrete lined inspection pit and wheel-level illumination. The current locomotive in the siding is DB Cargo branded 66077. The building is an adapted Midland Railway station building which serves as a signing-on point, offices and stores. 25th August 2022. 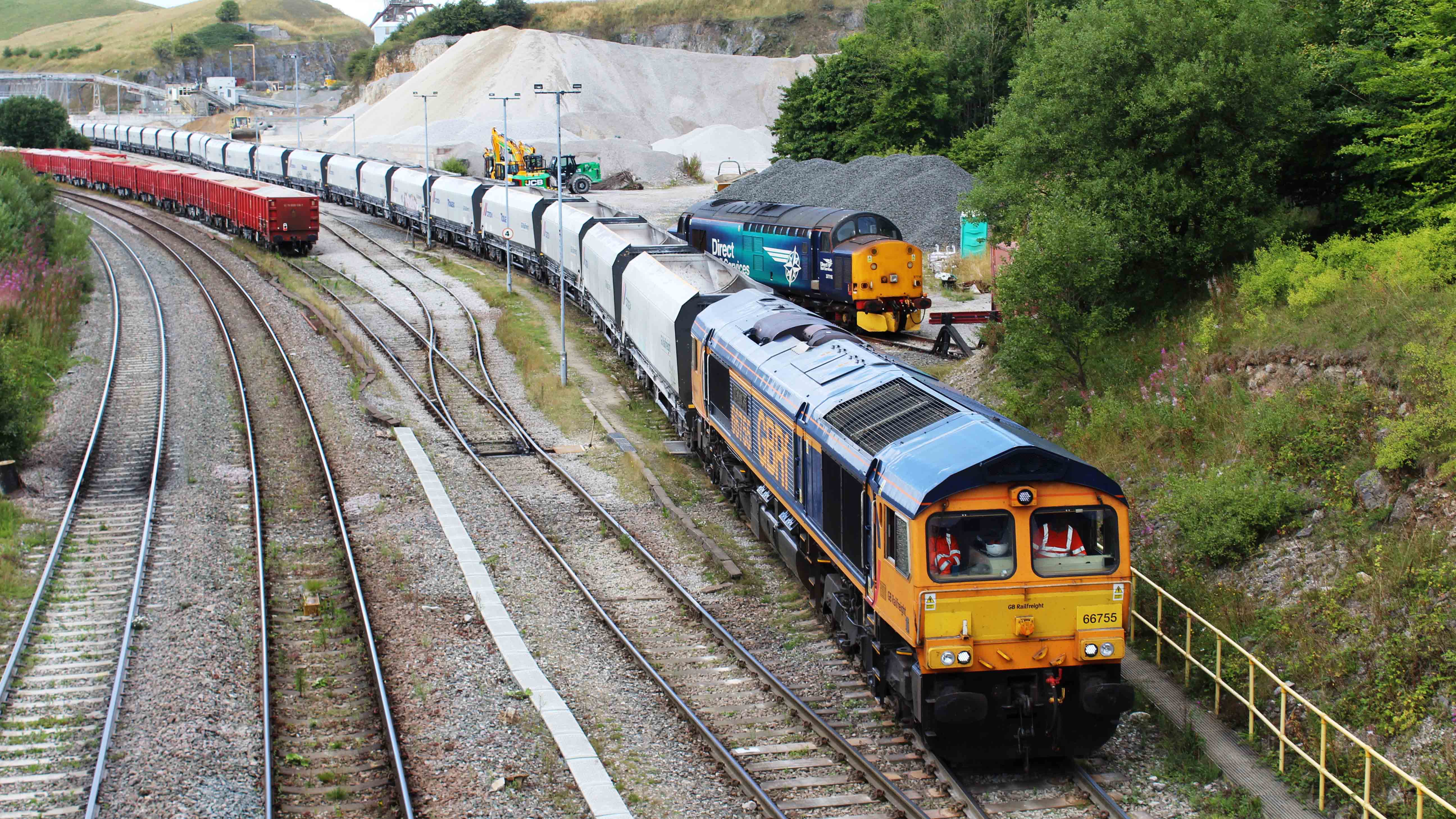 Figure 5. The view from the other side of the road overbridge reveals what 66755 is actually doing. It is lining up hopper wagons with the loader mechanical handling unit with the big JCB grab at the Cemex quarry railhead. The train-crew is in radio contact with the JCB driver and every now and again the train is shunted back and forth. The furthest most wagons from the loco are not in view by the train-crew so precision is required. The other loaded red painted limestone wagons appear to be of DB Cargo ownership.

Cemex used to have their own shunter which resembled a Sentinel Rolls-Royce powered 0-4-0 type vehicle but they seem to have replaced it, possibly temporarily, with a hired in class 37 from Direct Rail Services. It is numbered 37716. Regular readers of these articles might remember that the locomotive appeared in Figure 9 of the last article on Modern British Freight Workings. 25th August 2022. 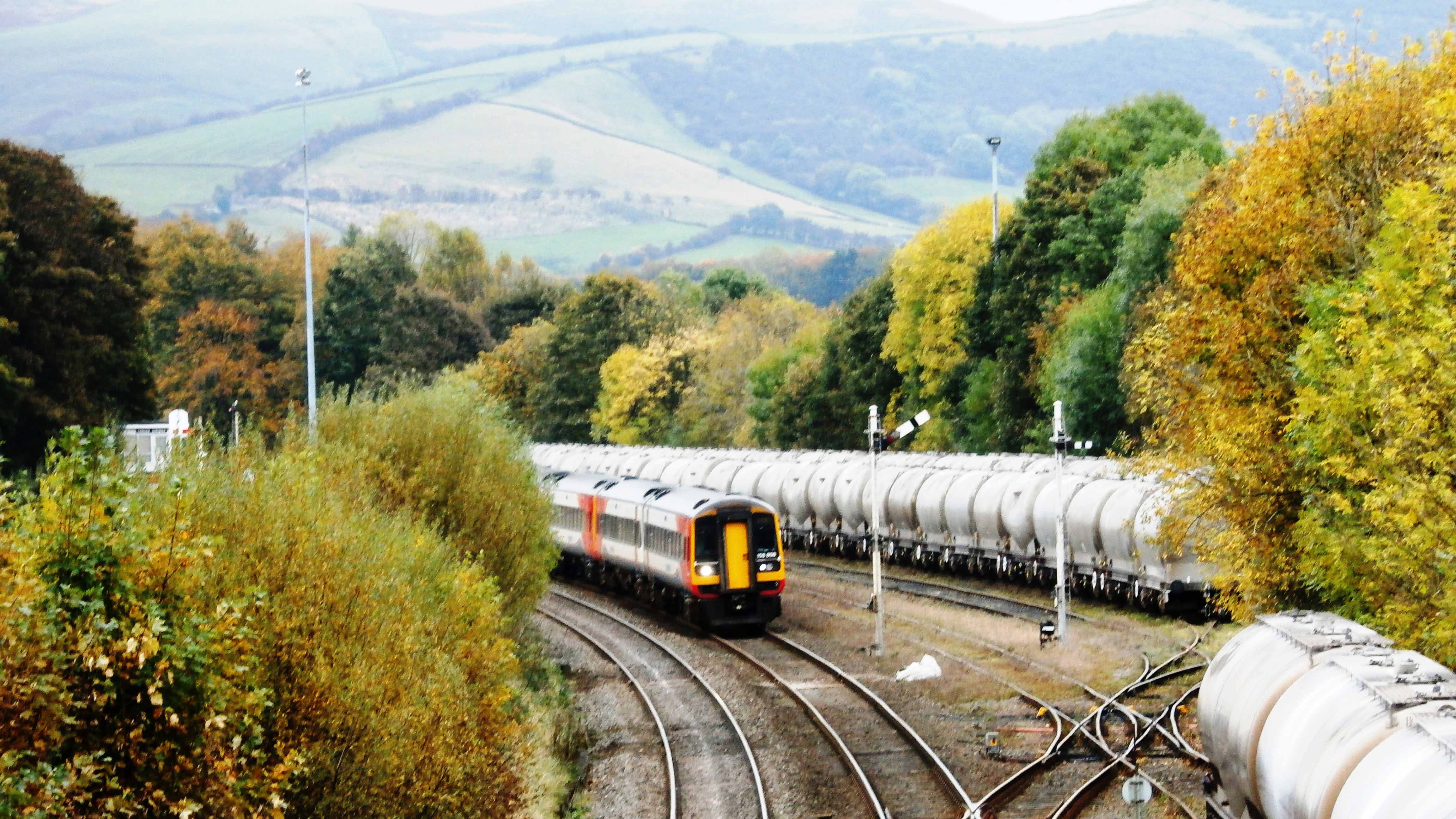 Figure 6. Earle’s Sidings Signal box is another mechanical component in the limestone story of the Hope Valley. It is also the signing on point for Freightliner crews to take trains in and out of the small yard there.

The signal box is on the extreme left by the signal sighting board and in the foreground is a double slip crossing which is now quite rare and only used in low speed areas. 15th October 2014. 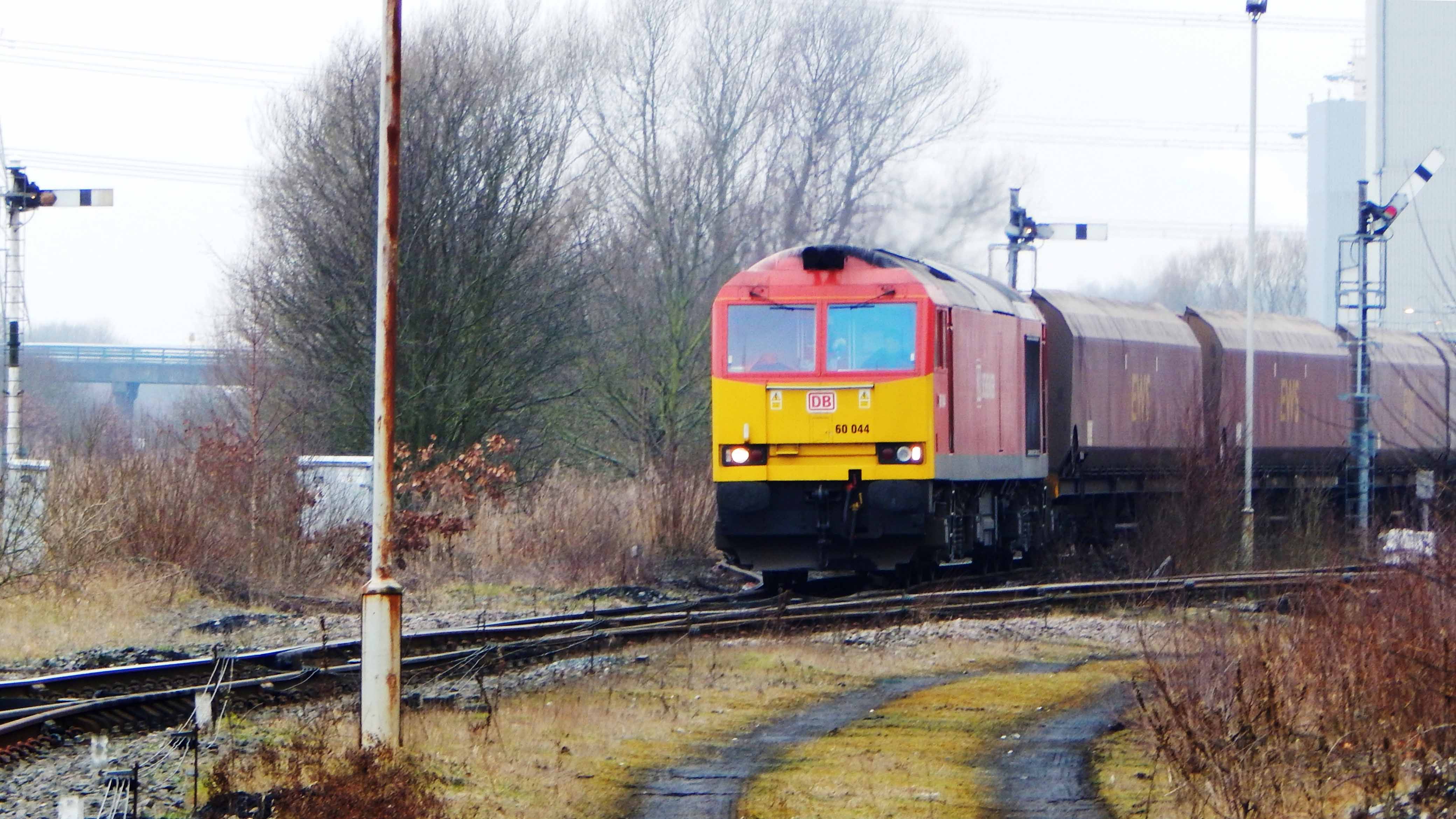 Figure7. On to coal now and although only a few years ago is a view now consigned to history. Fiddlers Ferry Power station near Warrington had had its demolition application recently approved but here a DB Cargo class 60 60044 leaves the small fan of sidings at Fiddlers Ferry with a train of ESW branded empties to return to the docks at Immingham where imported coal is stockpiled. If you compare the siding signals between this and the previous view they are larger here. It was the practice to signal lines of lesser importance with smaller signals but they now balance that with visibility so both sizes of siding signal can be seen around the network. 11th February 2015. 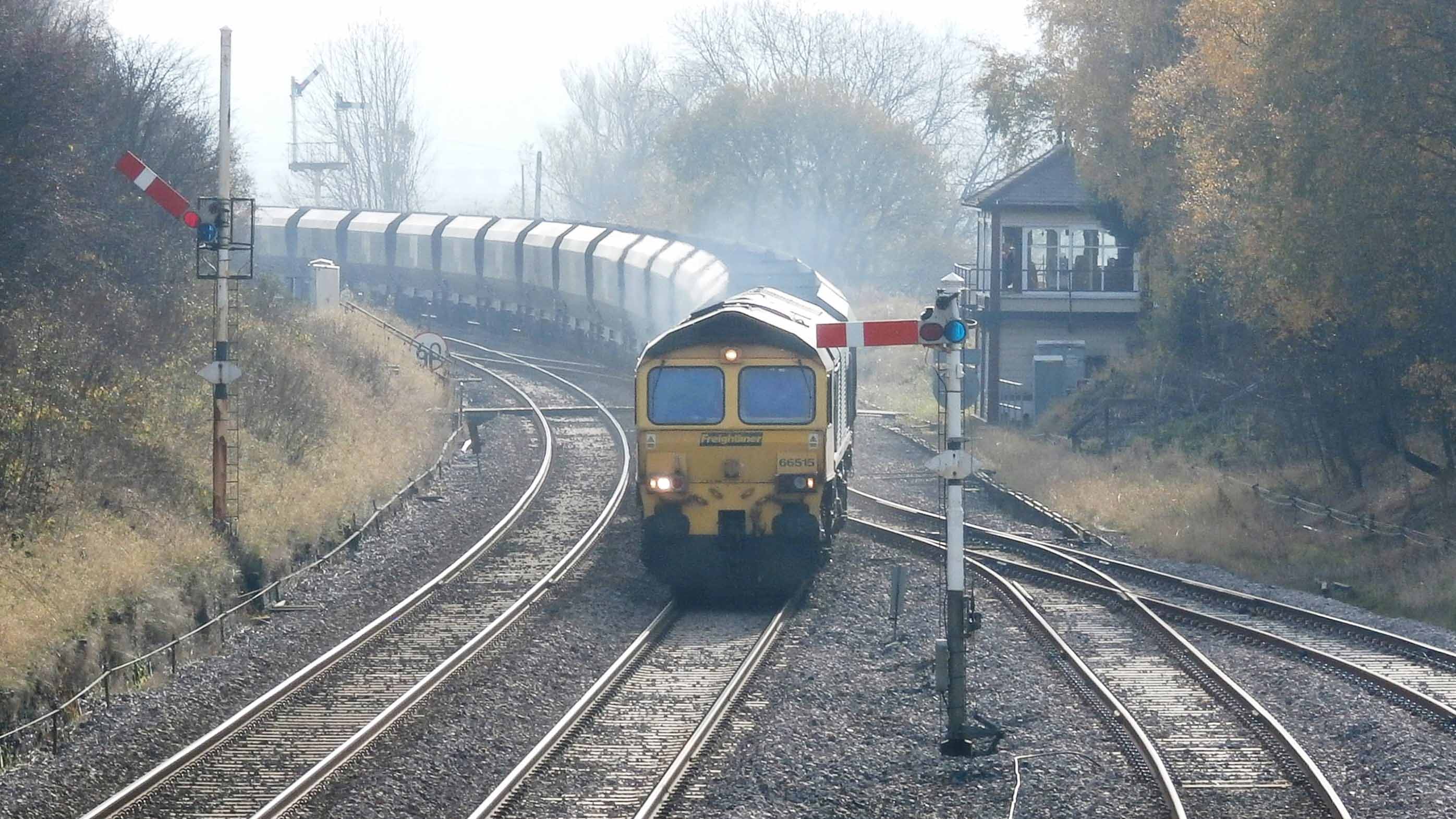 Figure 8. Hunterston in Ayrshire was another prolific importer of coal in recent years and here Freightliner class 66 66515 wheels a train of empty coal hoppers northwards back to Scotland at around 60 mph. The location is just by Settle Junction signal box where the former Midland Railway line branching off towards Morecambe leaves the Settle and Carlisle main line. At one point there were 38 coal and empty trains a day on the S&C. 31st October 2014. 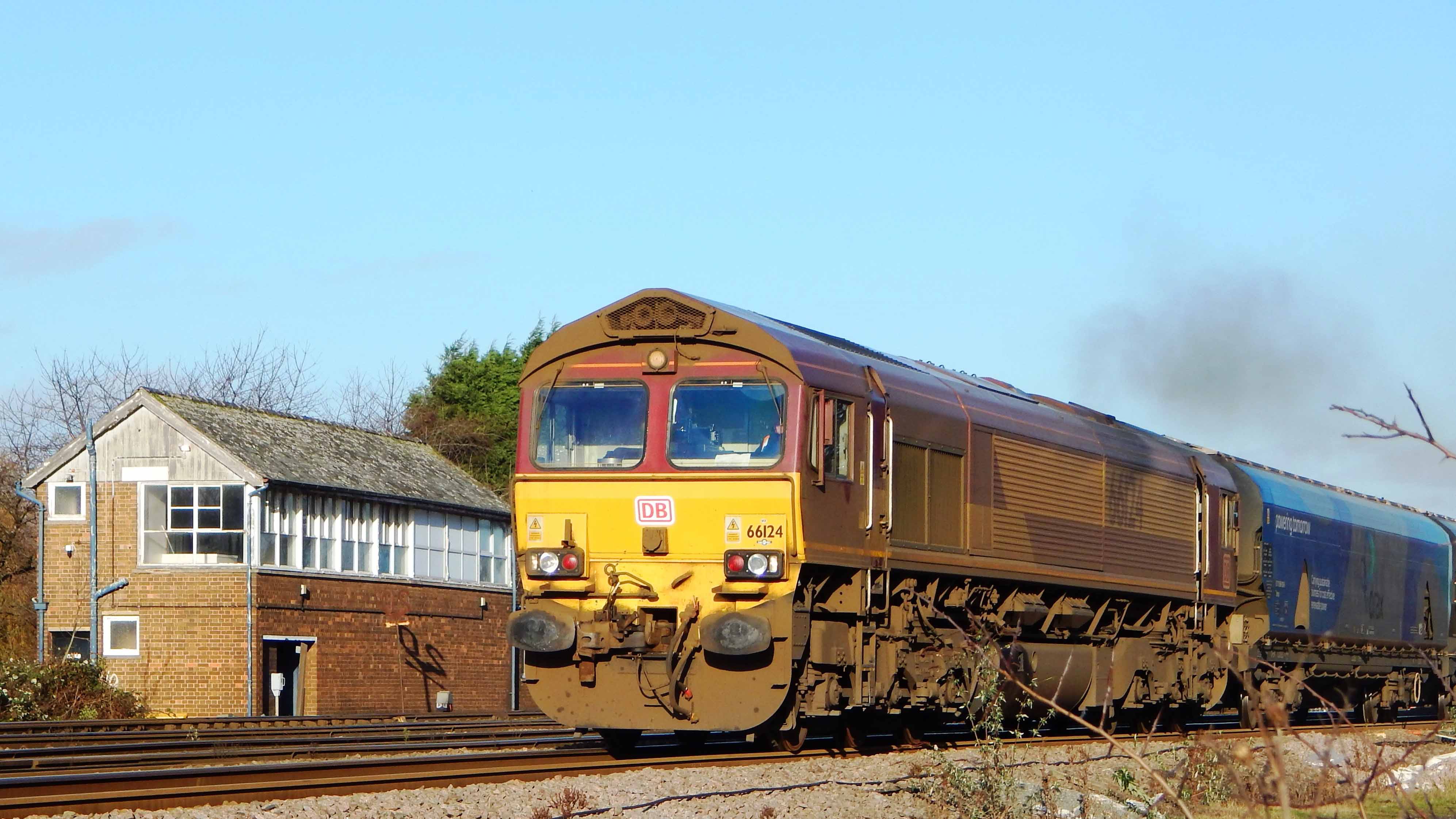 Figure 9. Biomass on the move. About 2,448 tons of train with EWS branded 66124 passes Milford signal box near Selby, Yorkshire bound for Drax power station on its way from Hull docks. Milford and Gascoigne Wood nearby were centres for the Selby coalfield developed in the 1980s and now redundant. Both Milford and Gascoigne Wood signal boxes were due to close in 2022, their work done. The former coal hopper sidings were occupied by biomass hopper wagons. The biomass hoppers are massive compared with coal hoppers as coal is a much more dense material than biomass and the same weight as biomass occupies less space. 29th December 2015. 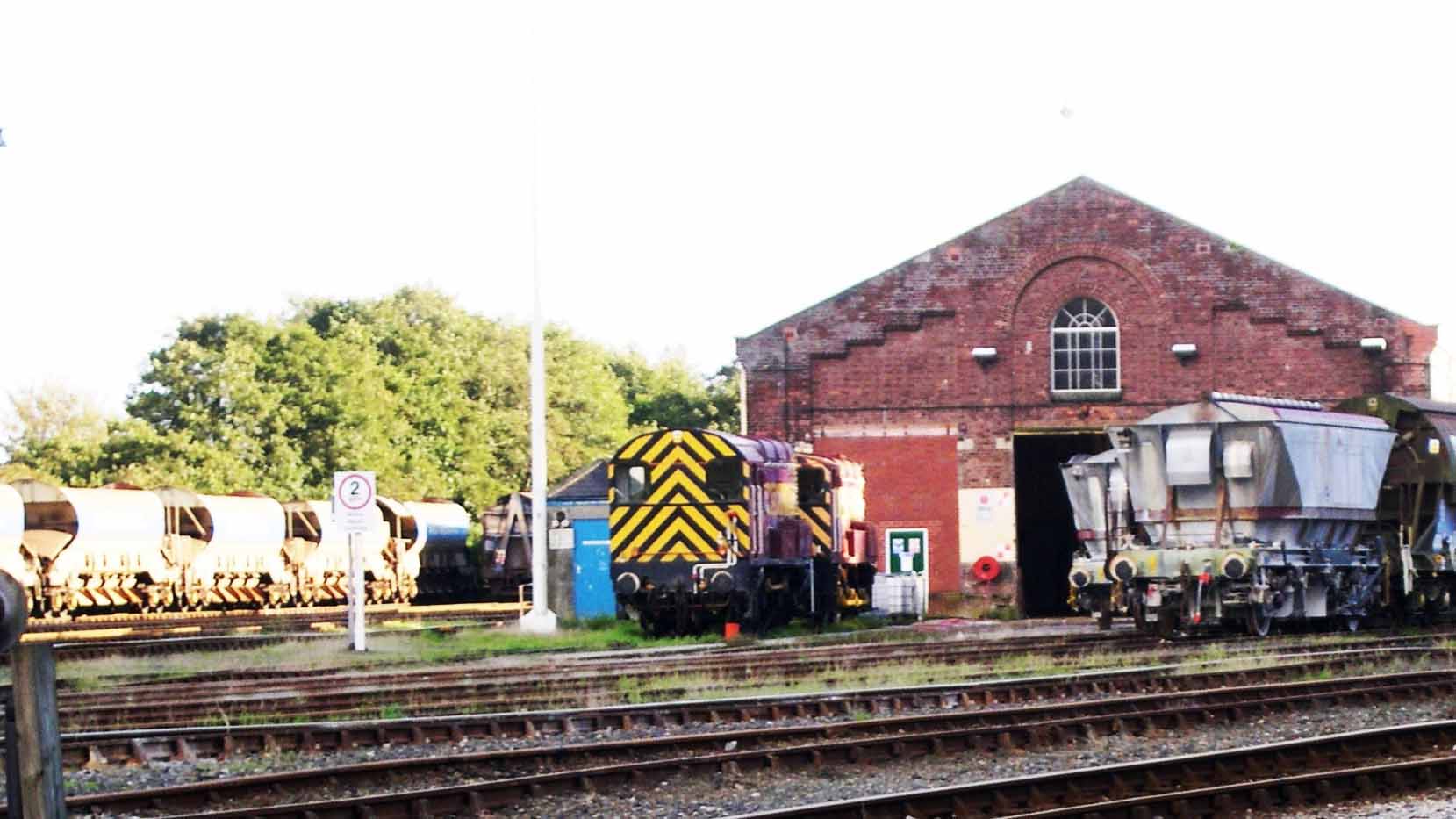 Figure 10. Finally in this article is a photo from the china clay industry at St. Blazey in Cornwall. St. Blazey resembles a fully functioning goods yard in some ways but most of the wagons are there for repair. In this view are two types of china clay wagon, the bogie large hopper with Imerys branding and the wagons on the right of the smaller four wheel hopper type. Of interest outside the former goods shed which is now a wagon repair depot, are two diesel shunters. One a 08 and the other is a cut down version which may be for Par docks or some of the low clearance bridges hereabouts. Also of interest is the EWS branded BR standard 20 ton brake van. 14th October 2004.