Over the course of the last 150 years, much of the pride in Britain's railways, for railfans, employees and historians alike, stems from the fact that Britain was, at one stage, supplying its own majestic locomotives - both steam and diesel. The same can be said for a number of other nations, notably the United States, who equally take pride in their own manufacturing prowess, with the likes of ALCO, EMD and General Electric churning out locomotives over the decades. But on both sides of the pond, exporting locomotives to other nations was also a way to show off the skills, innovations and cost-effectiveness of their products. The first locomotive to run in the USA was Stourbridge Lion, built in the English town of Stourbridge in 1829 and today, many locomotives running in the UK have come the other way across the Atlantic, notably EMD's JT42CWR model, better known to British railfans as the Class 66.

In 1898 the Lynton and Barnstaple Railway, running near the north Devon coast and the fringes of what is now Exmoor National Park, required a locomotive to haul trains along the 1 ft 11+1⁄2 inch narrow gauge line and with a large contingent of the British workforce on strike, the company turned to the Americans for help. The result was Lyn, named for the local River Lyn and though the locomotive fell victim to the closure of the railway in 1935, a replacement locomotive bearing the same style and name was constructed for the later heritage railway in 2009. Today, the railway is a popular tourist railway with recent appearances on TV courtesy of Rob Bell and Tim Dunn. This Lyn, as well as serving leisure passengers during the tourist season, also serves a welcome reminder of some of the great US-built machines that once graced Britain's railways. - JR

The original Lynton & Barnstaple Railway Lyn was constructed by The Baldwin Locomotive Works in Philadelphia, Pennsylvania in 1898. Among the great locomotive builders in world railroading history, Baldwin’s legacy stands tall. Founded by Matthias W. Baldwin (1975-1866), the company constructed its first locomotive – a diminutive four-wheeled, horizontal-boiler locomotive christened Old Ironsides – in 1832. Slowly but surely, Matty Baldwin’s business grew and from its original small factory in Philadelphia’s Lodge Alley, the company moved to a plant in the heart of Philadelphia at Broad and Spring Garden Streets. This plant, at which Lynton & Barnstaple Railway Lyn was constructed, would grow to 19 covered acres of buildings and serve Baldwin’s needs into the early twentieth century. In 1906, Baldwin acquired a huge tract of land south of Philadelphia along the Delaware River in Eddystone, Pennsylvania. Eddystone’s first erecting shops were opened in 1908 and when fully complete, Baldwins’ legendary Eddystone Works would sprawl over 616 acres and employ more than 21,000 workers. Eventually, Baldwin would construct more than 75,000 steam, electric, and diesel locomotives before ending locomotive production in 1956.

The Baldwin Locomotive Works was not only one of America’s greatest builders of locomotives, but could, in the steam era, arguably be called “locomotive builder to the world.” Baldwin built in first export steam locomotive, for Cuba, in 1838 and by 1923 had dispatched its locomotives to 78 countries across six continents. Indeed, the last steam locomotives built by Baldwin were 50 2-8-2s bound for India in 1955. Perhaps most famous of all Baldwin’s exports were its WWII-era S160 “GI Consolidations” (also built by Alco and Lima), but BLW locomotives built for foreign shores were many and varied. In the year after Lyn was built, Baldwin contracted for the construction of a total of 70 locomotives bound for England’s Midland Railway, Great Northern Railway, and Great Central Railway. As for the diminutive Lyn, it was similar in design to steam locomotives Baldwin had constructed for several American rapid transit rail lines and it shared the Philadelphia Works with a large order of Santa Fe 2-8-0s and the likes of Lehigh Valley “Camelback” Consolidation 681 which utilized Vauclain compound cylinders and weighed in at 226,000 pounds (which is to say, more than four times the weight of Lyn)! - GD

An early image of the original 'Lyn', without any British branding or livery. In its latter days the Lynton & Barnstaple Railway was operated by Southern, despite much of the surrounding territory being firmly under GWR jurisdiction. (Public Domain / Baldwin Locomotive Works)

Another example of a Baldwin narrow gauge locomotive is seen here, this time with a 2-8-2 wheel arrangement (rather than Lyn's 2-4-2 arrangement). Beyond this, there are many similarities between the style of the two locomotives. (Public Domain / Baldwin Locomotive Works) 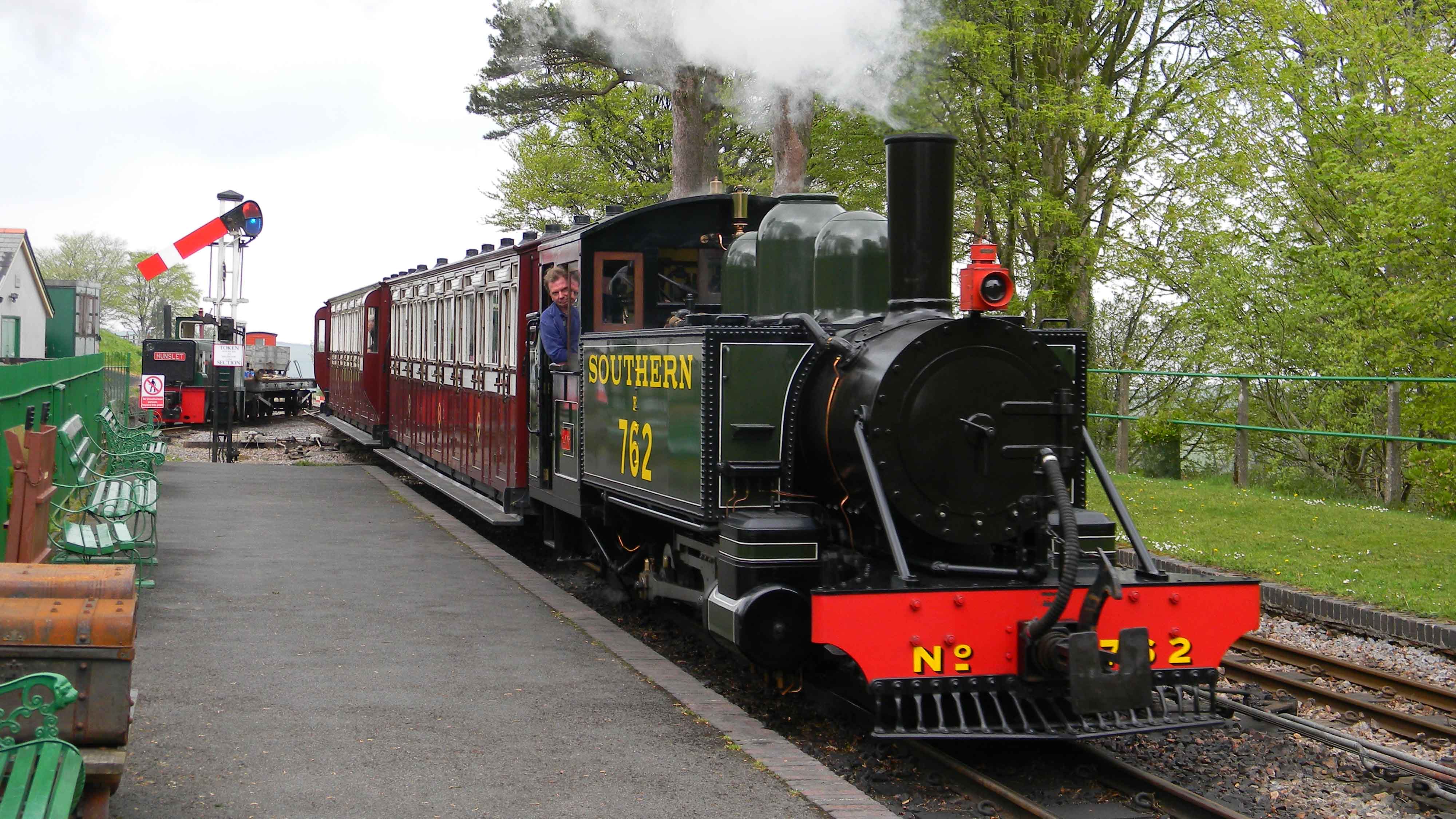 Today's 'Lyn' is seen here pulling into Woody Bay Station in Southern livery and with the no.762 which the original carried. The original 'Lyn' was sold for just £50 after the line closed in 1935 and then promptly broken up with only a few parts surviving. Photo by Joe Rogers. 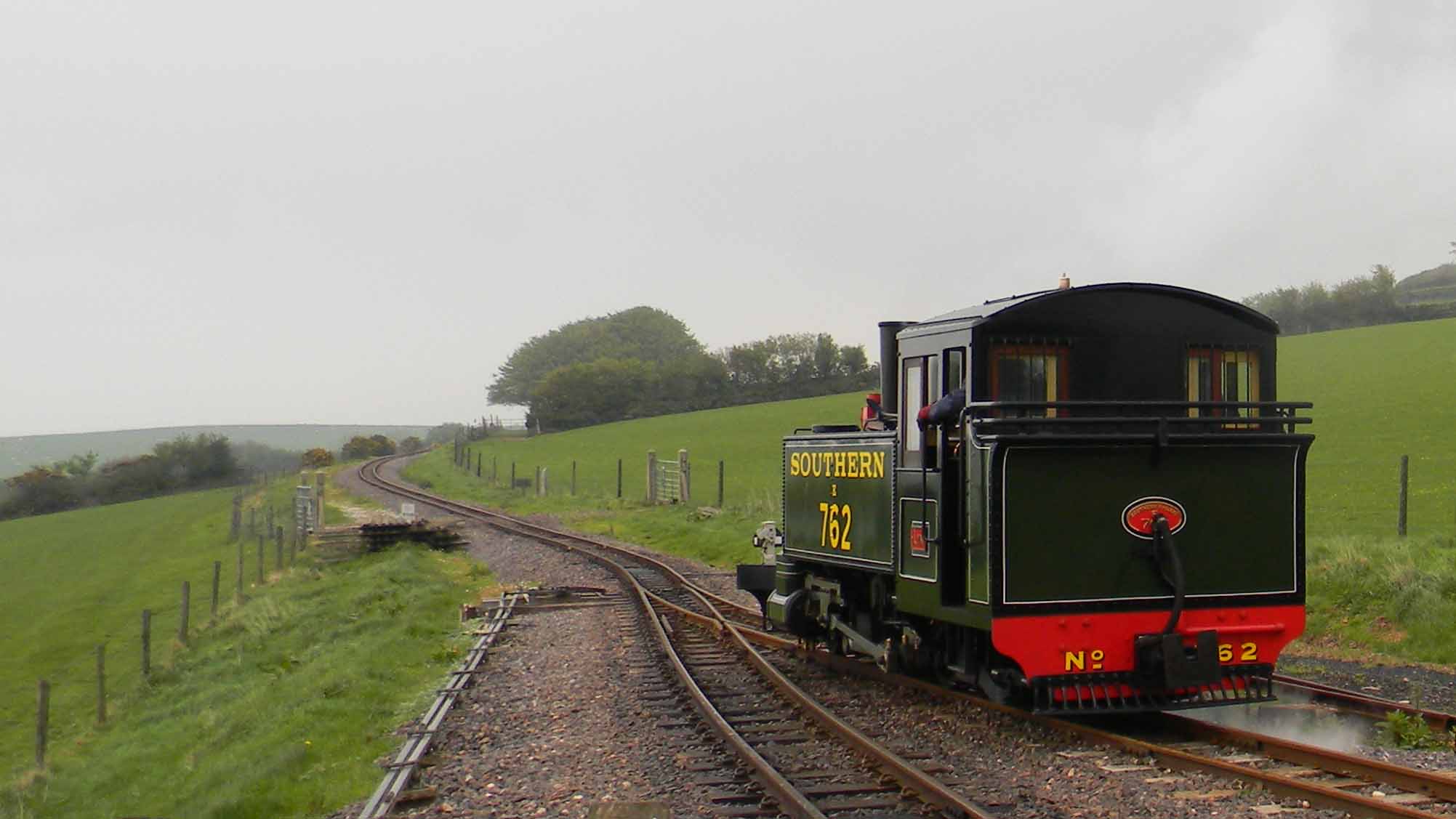 Since reopening in 2004 along a short mile-long stretch of line besides the north Devon coast, the railway has had ambition to extend running along sections of the original route, which went almost 20 miles between Lynton and Barnstaple. Stations buildings and part of trackbed have been purchased in recent years and plans to reopen the line into Parracombe Station, the next along the way, are well under way. Photo by Joe Rogers.

You can find out more about the Lynton & Barnstaple Railway here: https://www.lynton-rail.co.uk/