In Praise of The Yard Goat

The goat can be a charming and entertaining creature (and yes, cantankerous, too!) – and that also applied to railroading’s version of “the yard goat.”

The “Yard Goat.” For about as long as railroading itself has existed, railroad yard switchers, whether steam or diesel, regularly earned that colorful nickname. And, indeed, it is relatively fitting. If main line locomotives might be envisioned as thoroughbred horses or tonnage-hauling behemoths, then the yard switcher, toiling away in relative obscurity, might indeed be something of a goat. But for animal lovers at least, the goat can be a charming and entertaining creature (and yes, cantankerous, too!) – and that, too, applied to the railroading version of the yard goat.

In the steam era, yard goats came in many sizes and shapes, with most calling upon the popular wheel arrangements of 0-6-0 or 0-8-0, but there were also diminutive 0-4-0s on the small side of the scales and the likes of ponderous 0-10-0s among the yard-duty heavyweights.

In the early decades of the 20th century, it was none other than the yard goat that first began, in earnest, to usher in railroading’s diesel era in America. Long-time steam builder American Locomotive Works (Alco) began turning out end-cab diesel switchers in the early 1930s, and by the middle of that decade steam-stalwart Baldwin Locomotive Works and heavyweight newcomer Electro-Motive Division had joined the fray. And in the 1940s, Fairbanks-Morse and Lima Locomotive Works (Lima-Hamilton) also offered end-cab diesels for Class 1 railroading duties.

In the diesel era, the yard goat seemed to serve as a leveler of the playing field. While Electro-Motive would go on to largely dominate the market for diesel road locomotives, Baldwin, Alco, and Fairbanks-Morse all enjoyed reasonable success in producing yard switchers (although EMD again claimed the lion’s share). Indeed, of the 3,208 diesel locomotives Baldwin produced until its departure from the market in the late 1950s, nearly 60 percent were yard goats.

Primarily in the form of EMD’s long-lived and remarkably successful “SW” series of diesel switchers, the end-cab diesel yard goat remained in good favor well into the 1970s and early 1980s, but eventually the railroads’ abundance of aging road-switcher locomotives such as EMD Geeps, plus a general decline in the need for pure yard switchers (as the railroads transitioned more toward unit trains and intermodal traffic), brought an end to production of traditional yard switchers. The last diesel yard switchers built in traditional form were Electro-Motive’s 1,500-horsepower SW1500 and its smaller sibling, the 1,000-horsepower SW1001, the latter of which was produced into 1986.

But enough for the capsule history of the diesel yard goat. Rather, let’s turn our attention to the train-watcher’s appeal the diminutive creatures represented. To watch a yard goat carefully wading its way through a yard ladder track or tugging on a long string of cars many times its weight, or squeezing itself into an industrial spur, was to be entirely captivated. And yes, on occasion, especially on the likes of big city belt railroads and such, the yard goat had its chance to put on a mainline performance. Due to the nature of their toil, yard goats as often as not also enjoyed long lives, and in both the steam and diesel eras it was not uncommon for the goats to see half-a-century of service.

As with all creatures with personality, it was often easy to have a “favorite” yard goat, whether it be the hometown switcher or a locomotive of a particular type. My personal favorites, hands down, were in fact rather exotic goats – the tall-hooded Fairbanks-Morse H-10-44 and H-12-44 switchers of the Milwaukee Road. Fairbanks-Morse was a relative late-comer to locomotive building, and its diesel powerplant was a unique “opposed piston” design that had its origins in marine uses but sounded as much like an airplane as anything. The earliest Fairbanks-Morse diesel switchers featured a rear-cab overhang styled after that of a steam locomotive. Milwaukee Road H-10-44 No. 1802 (later No. 760) was the first locomotive to roll out of F-M’s then-new diesel manufacturing facility in Beloit, Wisconsin, in August 1944. The Milwaukee Road would roster 24 of the 1,000-horsepower H-10-44s and 48 of the similar 1,200-horsepower H-12-44s, and the distinctive F-Ms would serve upwards of four decades before retirement in the early 1980s. My memories of the Milwaukee Road’s “Fairbanks” are both many and fond.

While the era of the yard goat on North America’s “super” railroads is all but past, happily the yard goats carry on in hearty numbers on regional roads, short lines, belt lines, and industrial railroads (and yes, even Amtrak employs a small fleet). You can find many yard goats in museums as well. Among the survivors is none other than historic Milwaukee Road Fairbanks-Morse H-10-44 No. 760, lovingly preserved at the Illinois Railway Museum. If you’ve not yet made your acquaintance with railroading’s often personable yard goat, the experience is highly recommended. – Gary Dolzall 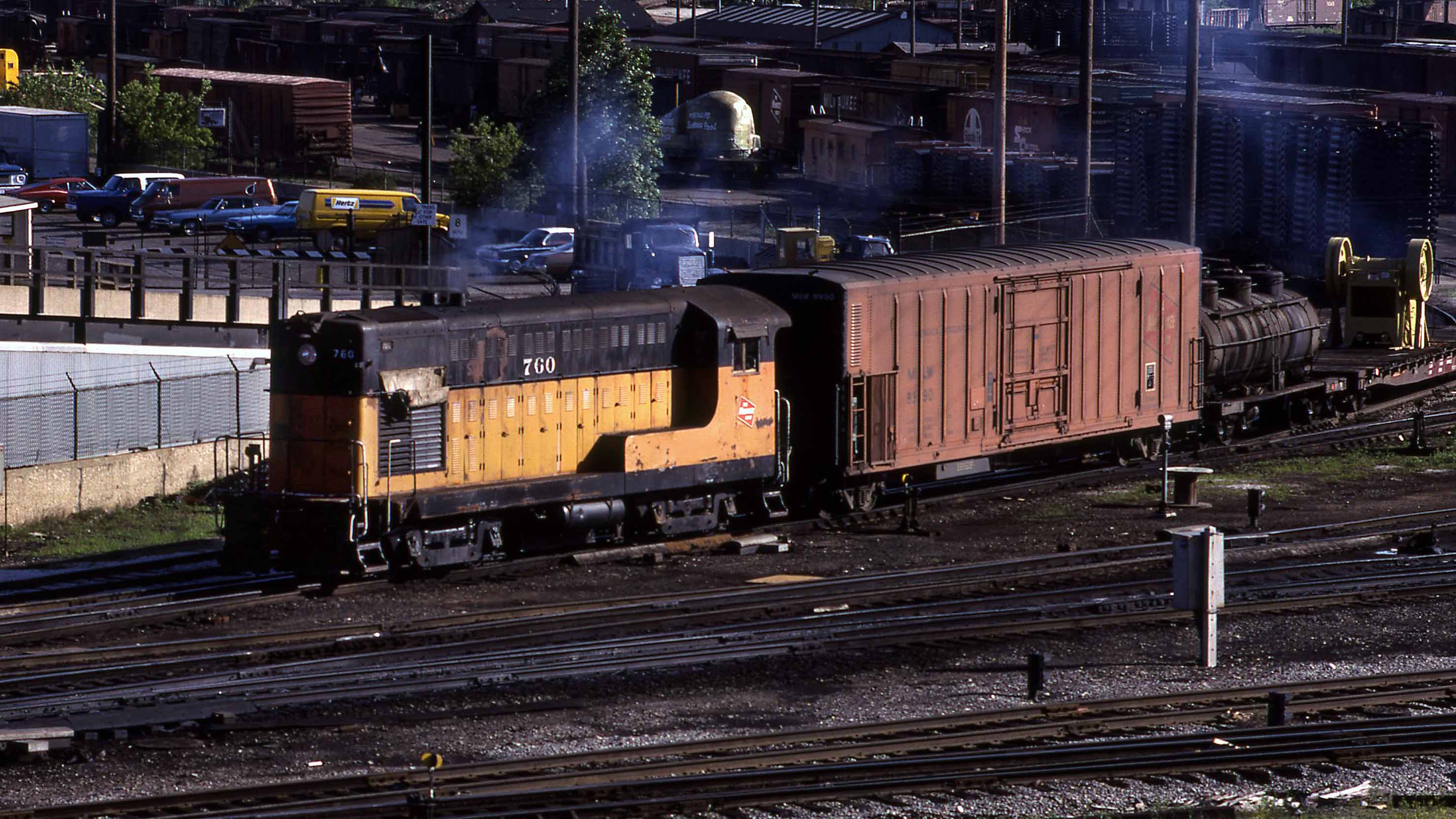 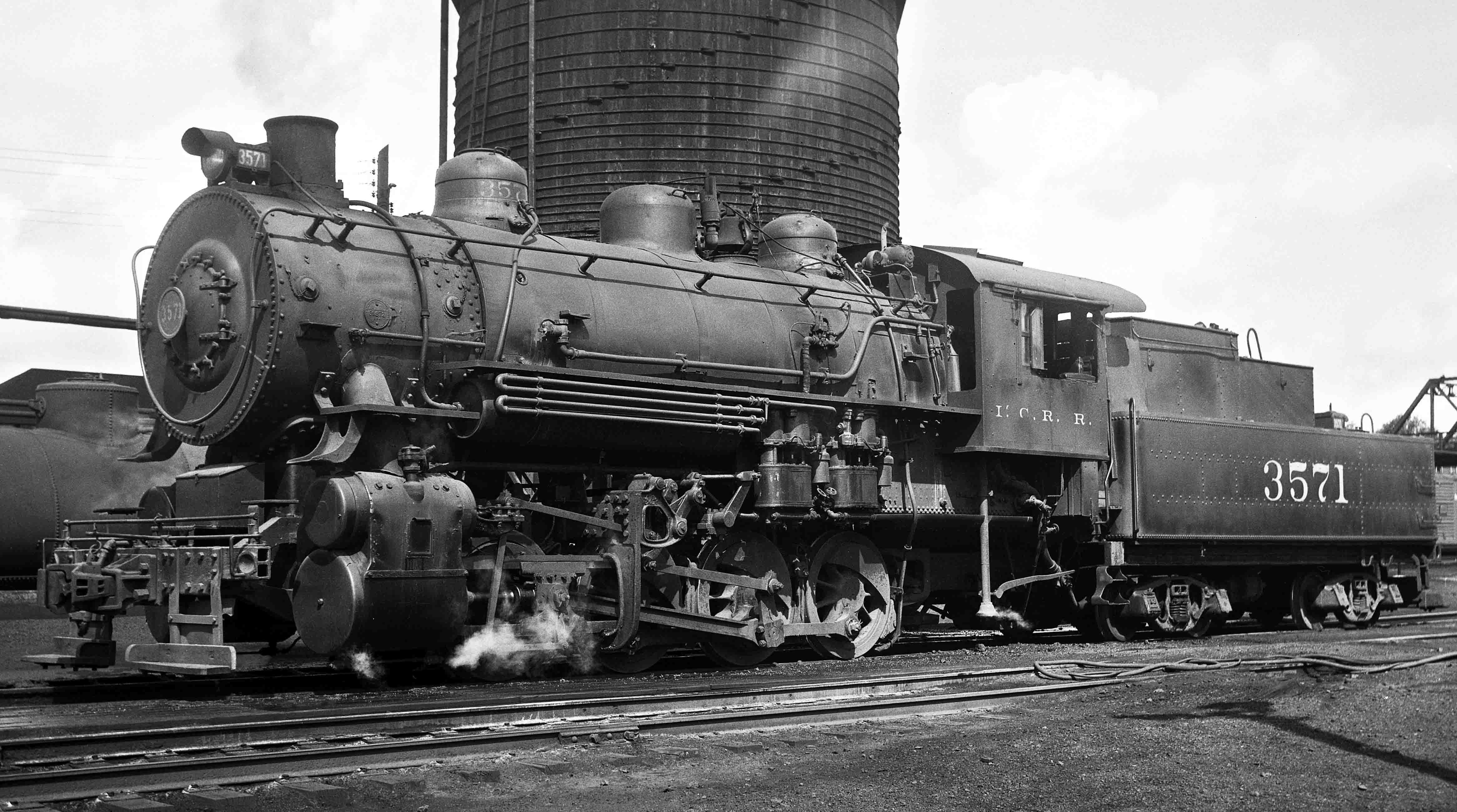 In the steam era, yard goats came in many sizes and shapes. Handsome Illinois Central 0-8-0 3571 (above), captured on film in Chicago in 1951, was constructed by The Baldwin Locomotive Works in 1926 and would serve the IC for more than three decades. Photo: Dolzall collection. On the Illinois Central, as across America, steam yard switchers were displaced by diesels. Illinois Central No. 800 (below) is an Electro-Motive SW8 built in 1952. Together with a sister, it tends switching duties at Paducah, Kentucky, in 1974. Photograph by Gary Dolzall. 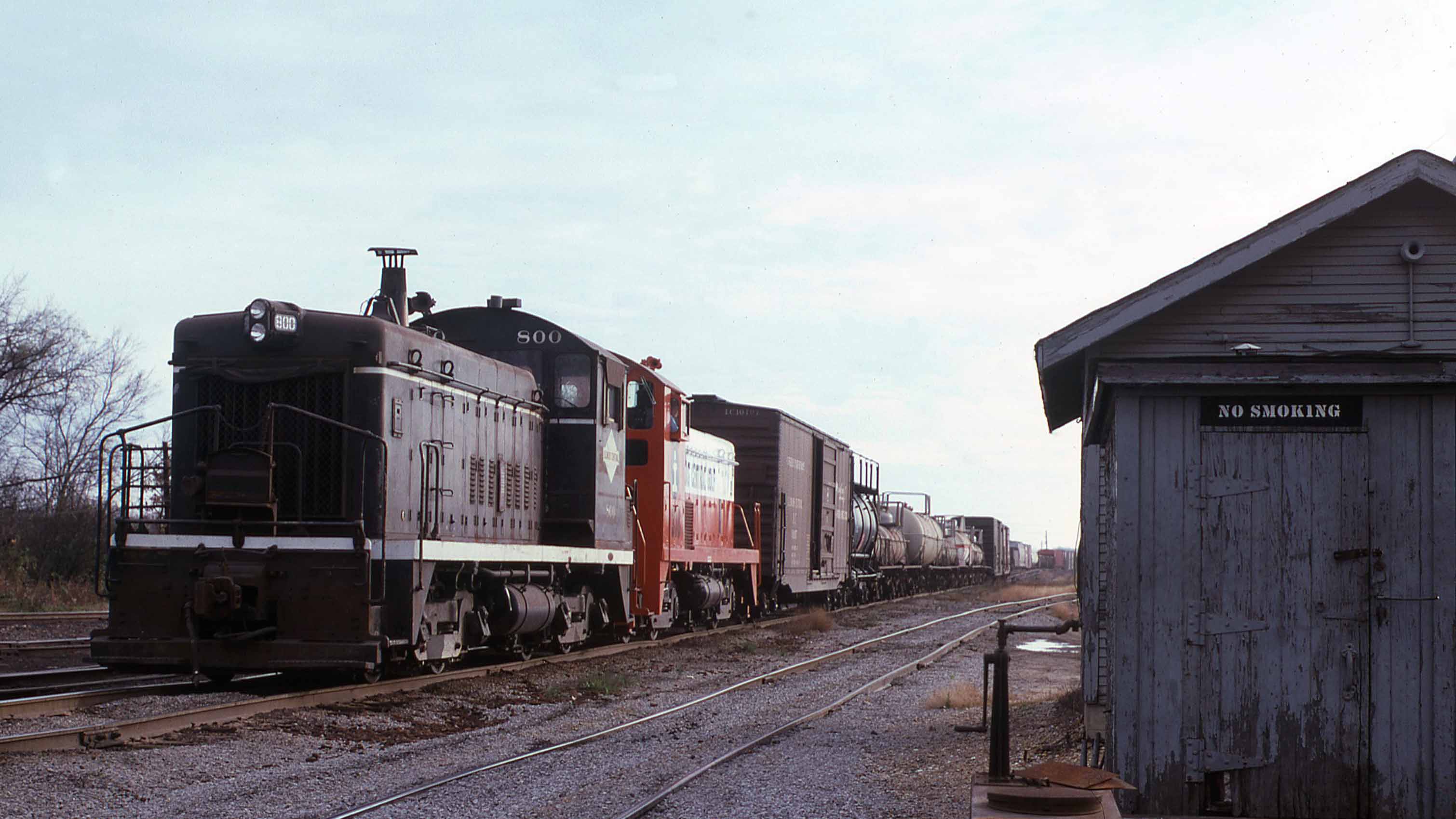 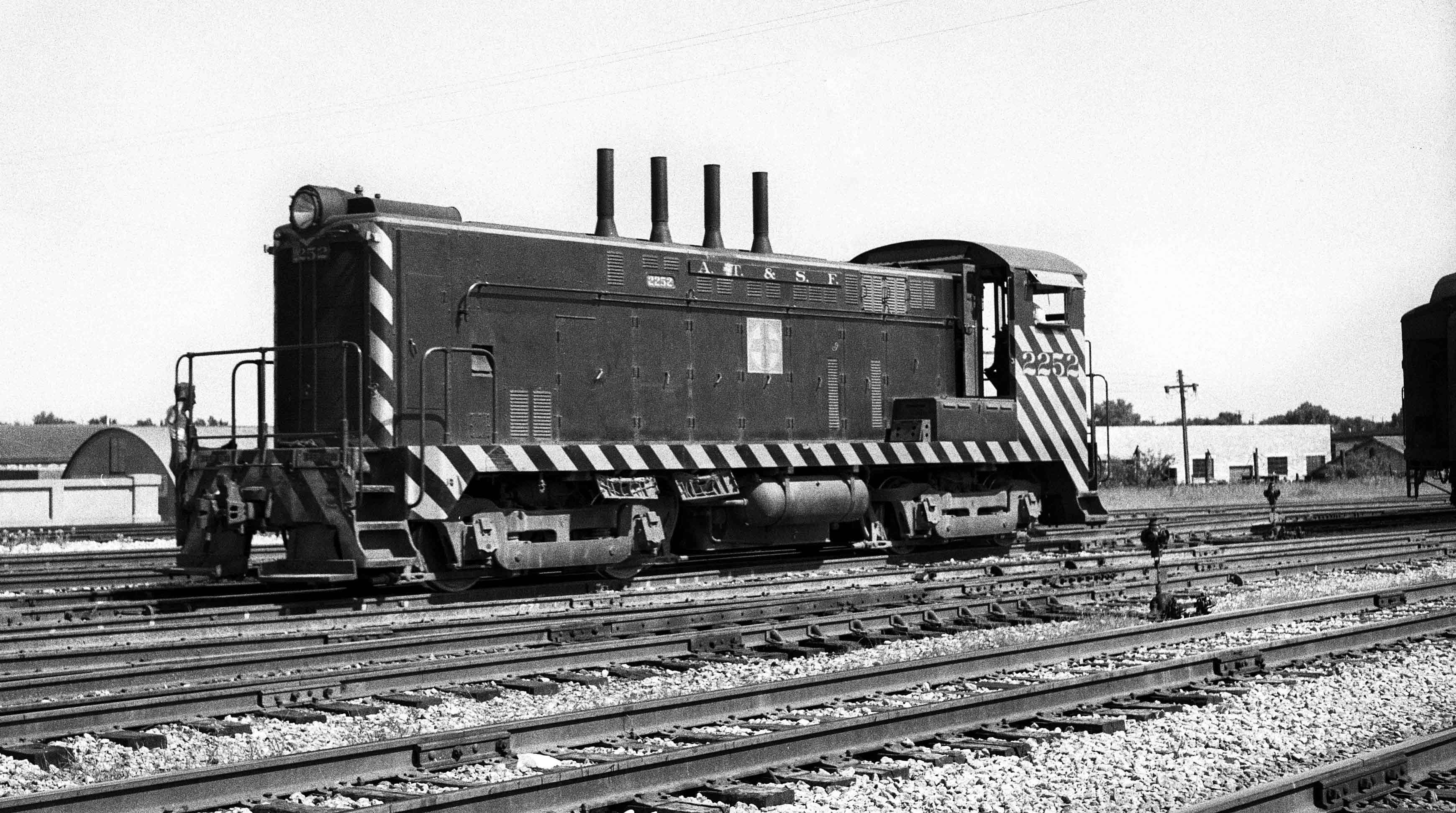 Proof positive that yard goats could be rather exotic is Santa Fe 2252, a Baldwin VO-1000, sporting the AT&SF’s early black and silver “zebra stripes” livery and a quartet of extended exhaust stacks. Baldwin’s diesel switchers were known for their enormous pulling power and steady performance, and the yard goats represented nearly 60 percent of BLW’s diesel production. Photo: Dolzall collection. 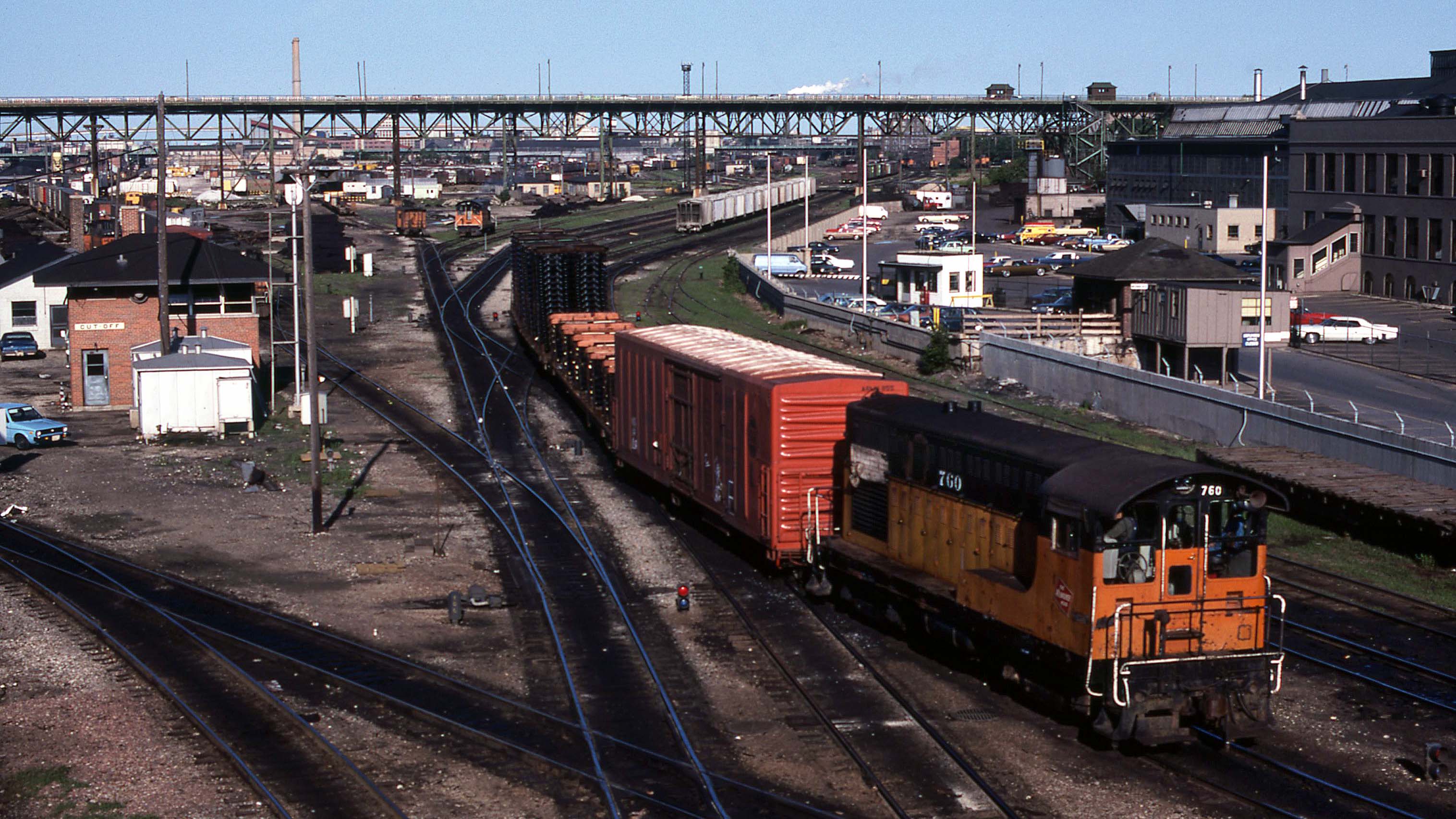 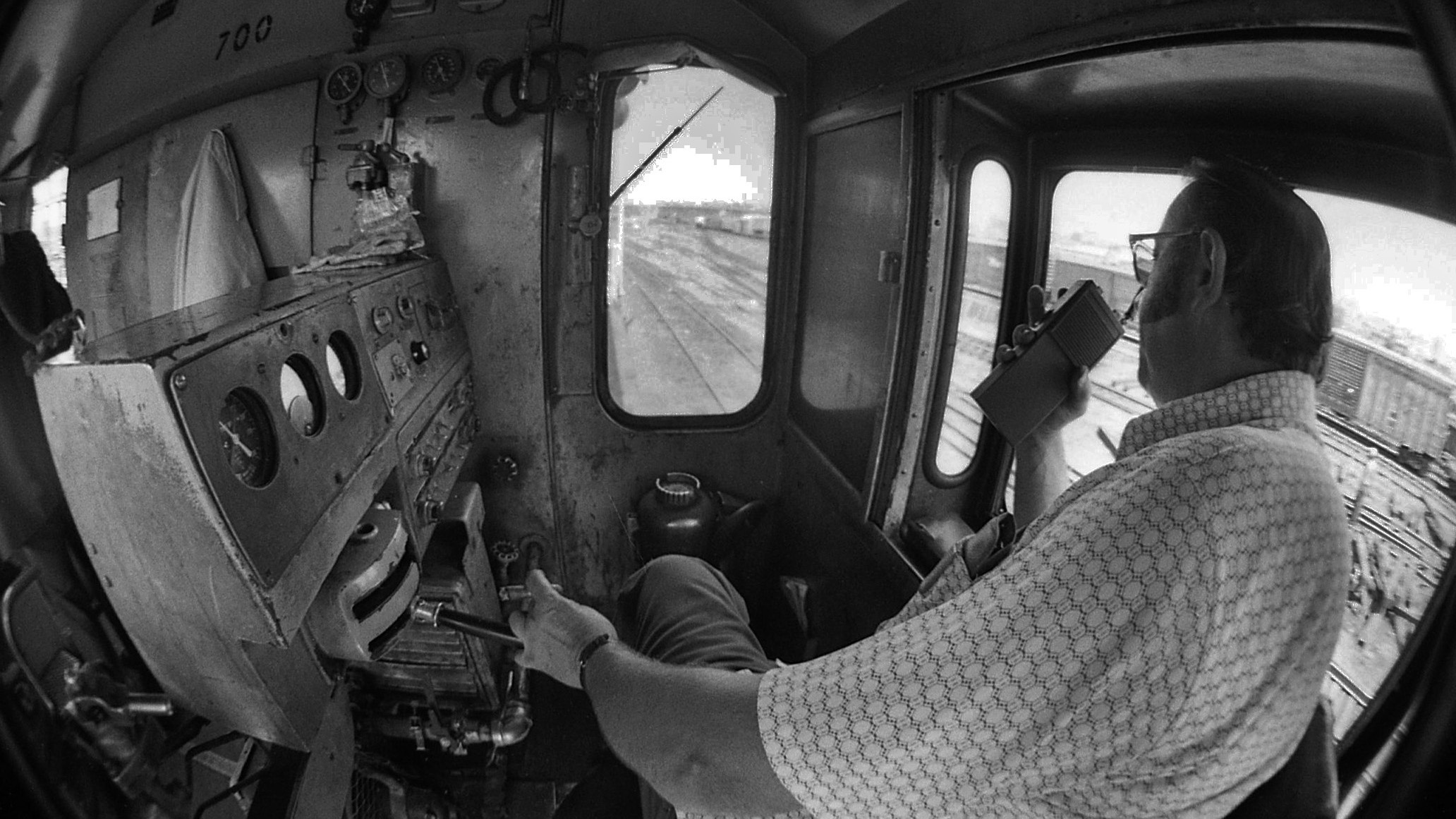 What could be better than watching a favorite yard goat from trackside? Why experiencing a cab ride of course! Aboard Milwaukee Road F-M H-12-44 No. 700, the author used a “fisheye” lens to capture the engineer at work (above), and from the fireman’s seat, witnessed a trio of yard goats working in close quarters at the railroad’s Milwaukee yards (below). MILW 703 is a sister H-12-44, while MILW 644 is an EMD SW1200. Both photographs by Gary Dolzall. 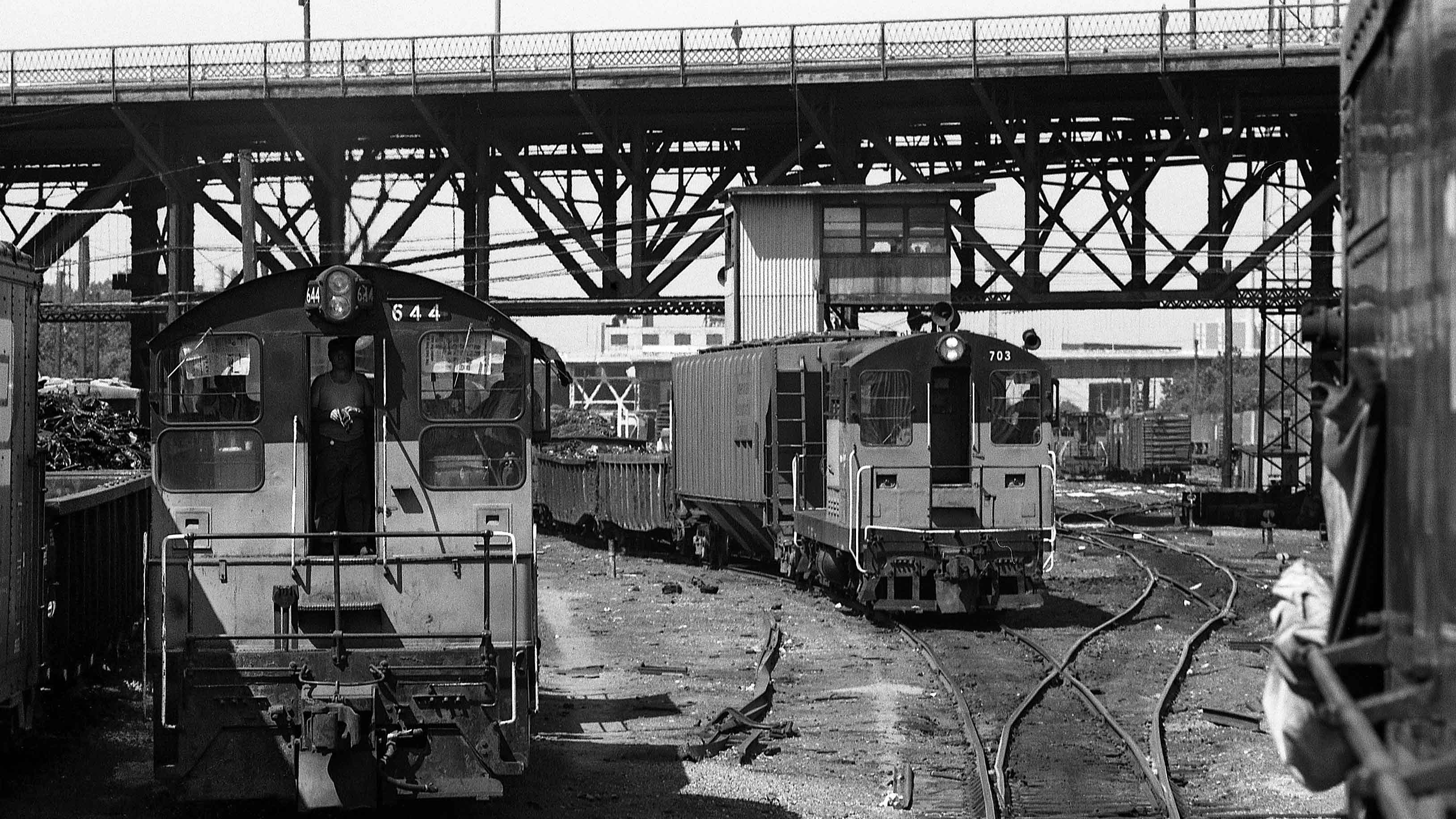 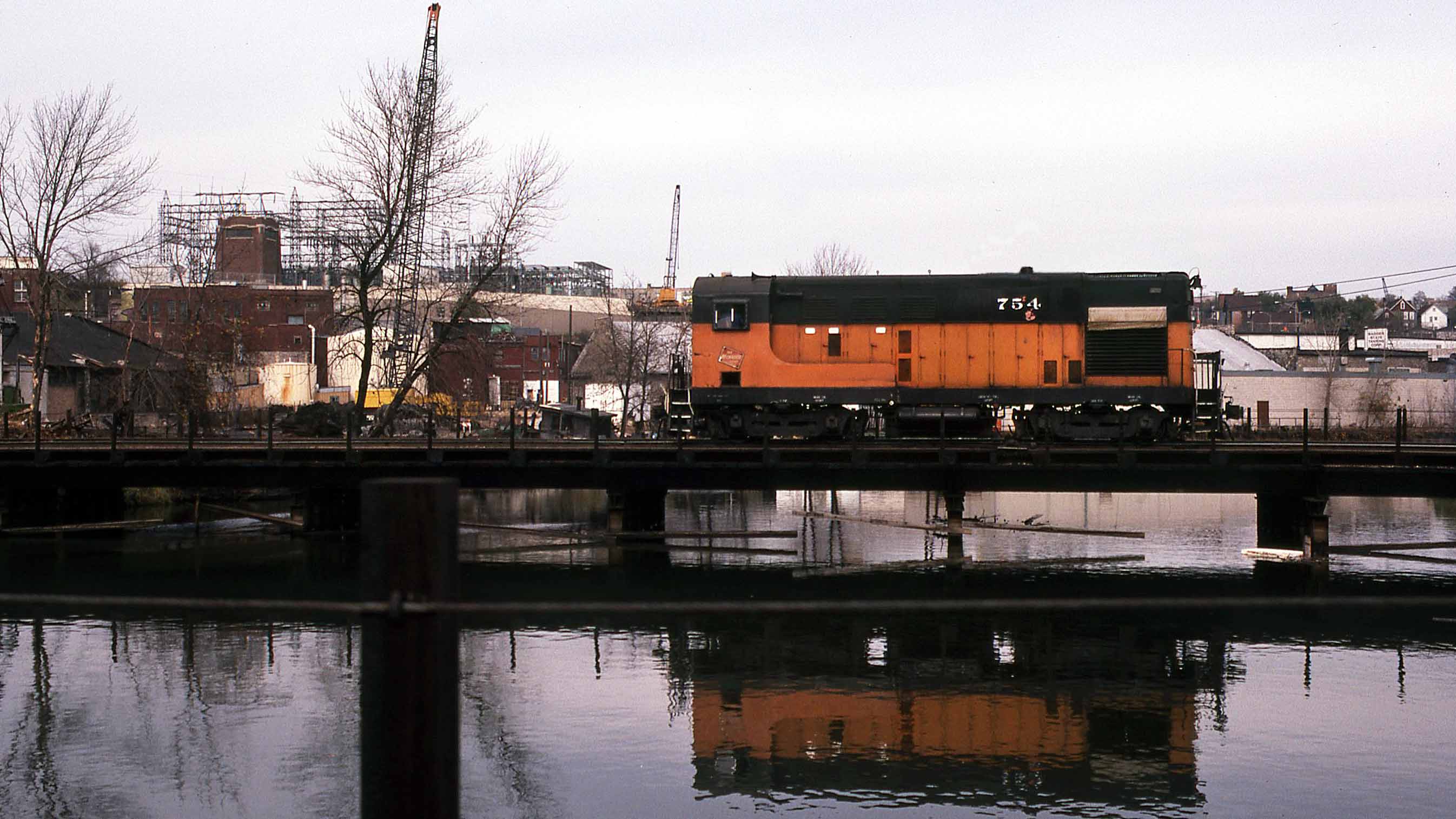 On a gray day rather befitting the gloomy surrounds of Milwaukee’s Menomonee Valley industrial district, Milwaukee Road H-12-44 754 is in search of more tonnage to haul in 1979. The Milwaukee Road rostered 24 H-10-44s and 48 H-12-44s, and the distinctive F-M switchers would serve upwards of four decades before retirement in the early 1980s. Photograph by Gary Dolzall. 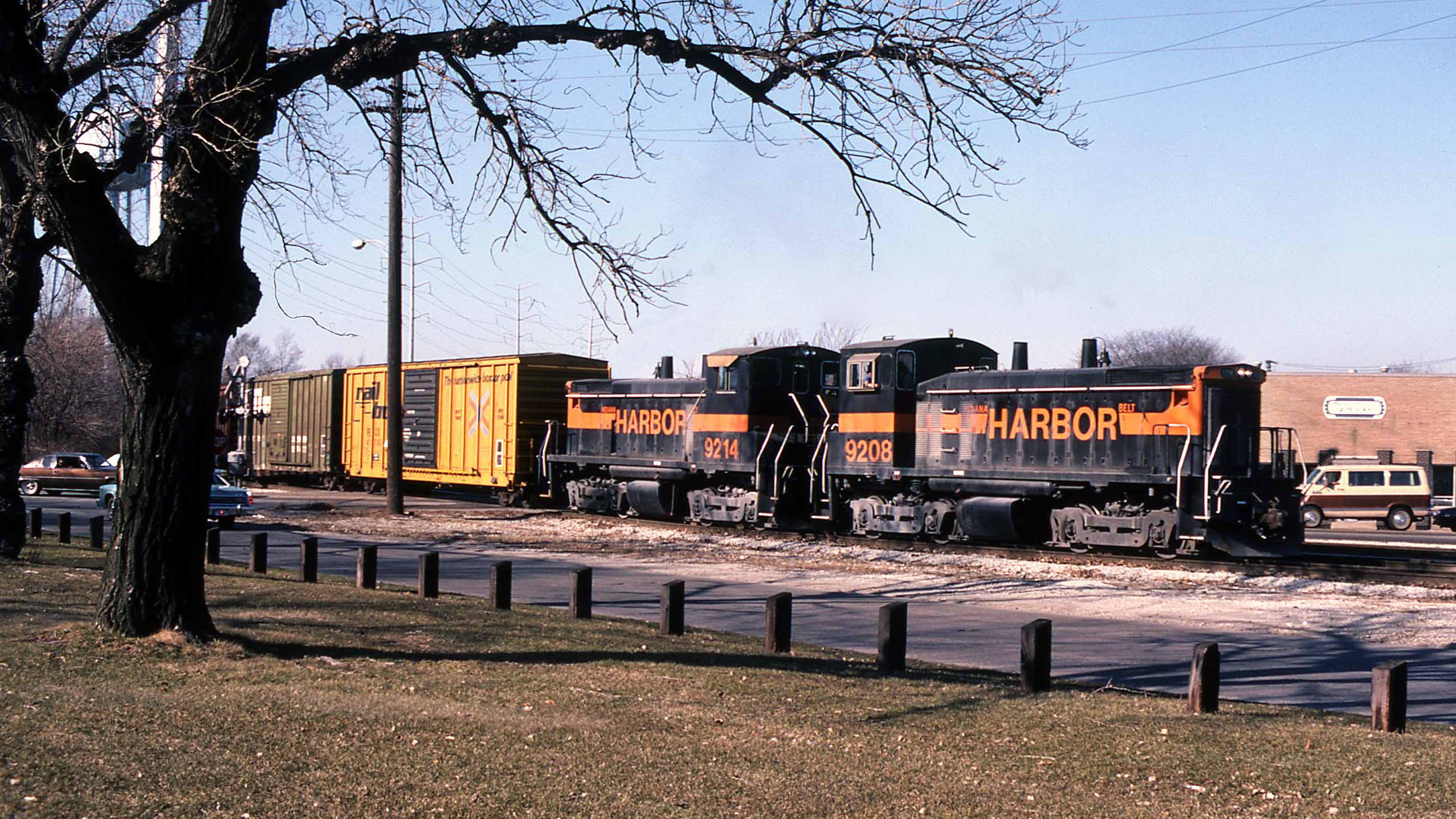 Yard goats did, on occasion, get out on the main line, especially on belt and terminal railroads such as Chicago’s Indiana Harbor Belt. On the IHB, the goats were allowed to stretch their legs at up to 50 mph on the main line. A pair of IHB EMD SW1500s have tonnage in tow through their hometown of LaGrange, Illinois. The EMD SW1500, produced until 1974, was among the last of America’s traditional end-cab switchers in production, and a number of the 1,500-horsepower units remain in service on the IHB.