British author Richard Billingsley first discovered the joy of American railroading during a family holiday in 2008 and since then has been to over 30 states in pursuit of some brilliant photographs. His latest book CSX Transportation gives an overview of one of the USA's most important railroad companies.

All words and photos by Richard Billingsley.

The 21000 route miles of CSX Transportation cover much of the eastern United States, from the Canadian provinces of Quebec and Ontario, down through the Rust Belt states and along the eastern seaboard to the south, Georgia, Alabama, Louisiana and Florida. The company was formed in 1980 from the Seaboard Coast Lines system - mergers and acquisitions, particularly the Chesapeake and Ohio Lines in 1987, led to the CSX system that operates today. The vast majority of the company’s fleet is now painted in the current dark blue and yellow livery, few now carry the previous grey and blue colours.

The railroad entirely focuses on freight traffic, but several passenger operations have trackage rights over CSX rails. A good number of Amtrak long distance services can be seen as they traverse CSX routes, the Silver services from New York to Miami and Palmetto services to the Carolina’s and Georgia travel south on CSX routes after leaving the North-East corridor route just south of Washington DC.

Recently, the A-Line that runs south through Orlando FL has been sold in part to the Florida Department of Transport in connection with the Sun Rail project. This has brought a new commuter rail operation to central Florida, CSX still has trackage rights to access Taft Yard and a large coal fired power plant to the east of Orlando, although these are usually limited to times when Sun Rail is not operating.

It was on this route that I first saw a CSX service, back in 2008 at Sanford FL. Most of my experiences with CSX are in the southern part of their operations, I’ve been lucky enough to have visited the States 23 times and visited 33 of the lower 48 states, but the Rust Belt states are still on the ‘to do’ list, a planned trip to Kentucky, Indiana, West Virginia and Ohio in 2020 is sadly still on hold.

My trips have allowed me to build up a considerable archive of railroad photography, this in turn has become an ongoing project to document the Class One railroads in a series of books, three of which thus far been published by Amberley Publishing in the UK. The latest of these, CSX Transportation, was released in June and pairs pictures taken since 2008 with the results of a three-week period spent in Florida, Georgia and Alabama during the exceptionally warm and dry autumn of 2019.

As someone who is only able to see American trains once or perhaps twice a year, I’ve noticed a couple of differences between CSX operations and those of the Class Ones further west. You are much less likely to see a consist with several locomotives under power in the east, manifests and bulk trains dragging over the Continental Divide and through the high desert mountains often have between four and eight units under power, whereas CSX trains with more than three are not that often seen. This is down to topography, apart from the Appalachian Range, the eastern US is relatively flat and you simply don’t need so many horse power to move your train.

Possibly for the same reason, long distance CSX trains are somewhat more likely to be hauled by smaller, less powerful locomotives. Out west on the main lines, trains are almost exclusively powered by the big GE Evolution and EMD SD70 series units which put out in excess of 4000hp, with smaller units utilised for yard and local workings.

In the east, the big units are still there but smaller SD40 and SD50 units and even elderly GP locos will appear on long distance work from time to time. These units can be seen working manifest trains, these are trains that carry traffic from the many thousands of private user sidings that still exist in the US. Basically mixed freight trains, they are assembled by collecting traffic from customers, sometimes as little as a single car, these are taken to the nearest classification yard and formed with other wagons heading for the same regional destination. On arrival at the destination yard the cars are split into local trains that then deliver the traffic to as many destinations as required along its route.

Along with the regional yards, CSX has five main hump yards, one in each of Indiana, Ohio, New York, Tennessee and Georgia. The hump yard in Georgia is Rice yard, situated at Waycross in the south-east of the state. The city lies at the confluence of six routes and is the main hub for traffic to and from the far south. One of the largest facilities operated by CSX, there are many miles of storage lines along with the hump yard and a large diesel shop.

There is of course no public access, the area is extensively patrolled by the railroad’s own police and there are no public areas that provide a view of the yard. However, it is possible to position yourself at a point close to the old passenger depot where you can see traffic arriving on five of the six routes, a busy day will give you plenty of action to view.

25 miles south of Waycross is the City of Folkston. A focal point for railfans, Folkston is where two main north to south routes converge and continue south to Florida, splitting once more to the north of Jacksonville, the home of CSX Transportation’s headquarters.

This converged route is known as the Folkston Funnel, and as the main route south into Florida, the density and variety of traffic attracts railfans from across the globe. Around 30 to 40 freight trains will pass in a 24-hour period, along with six Amtrak services and the city has provided a viewing platform with grills, benches, information and a live radio feed for visitors to enjoy whilst watching the show. I will cover a day at the Funnel in a future article. 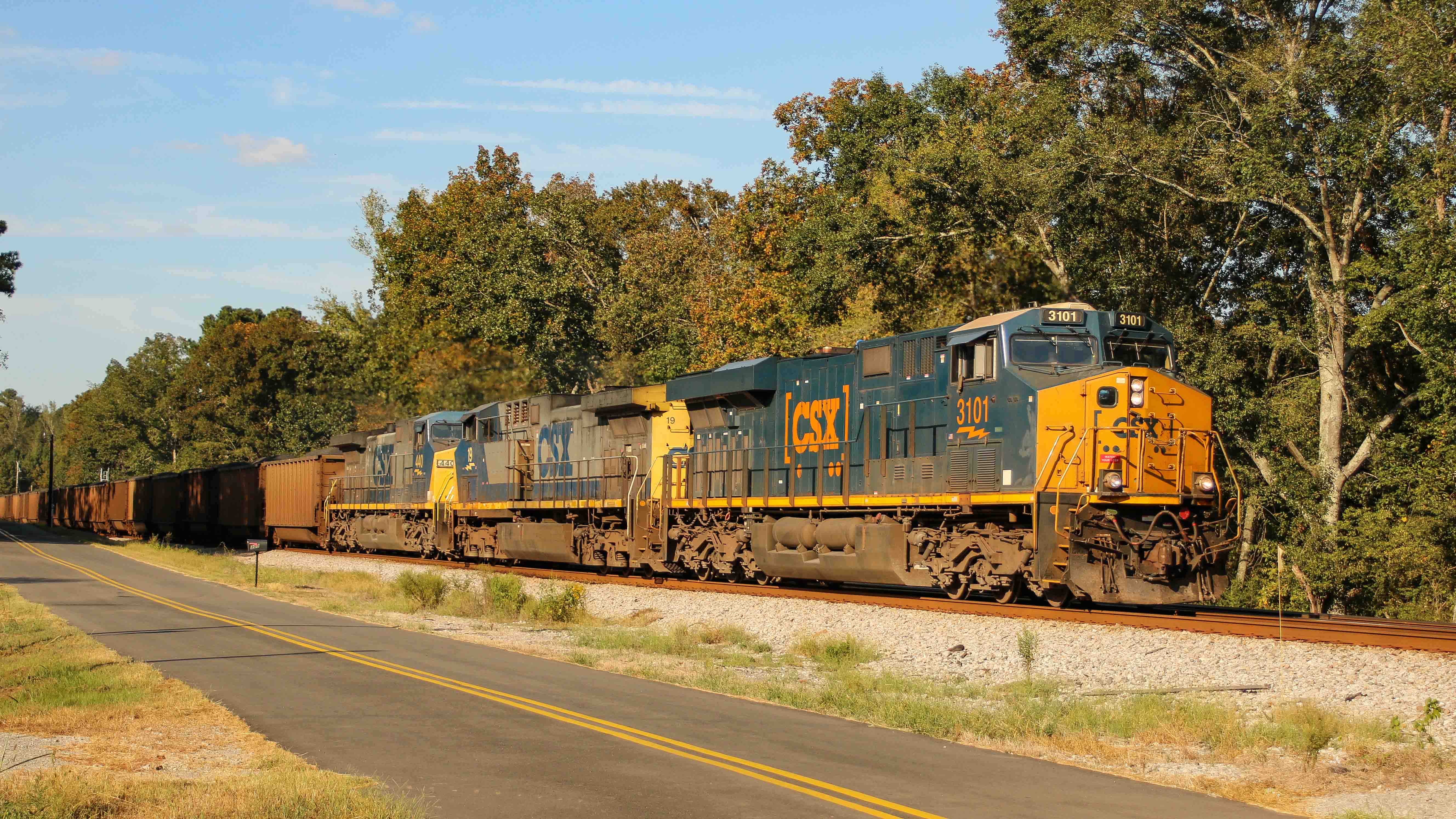 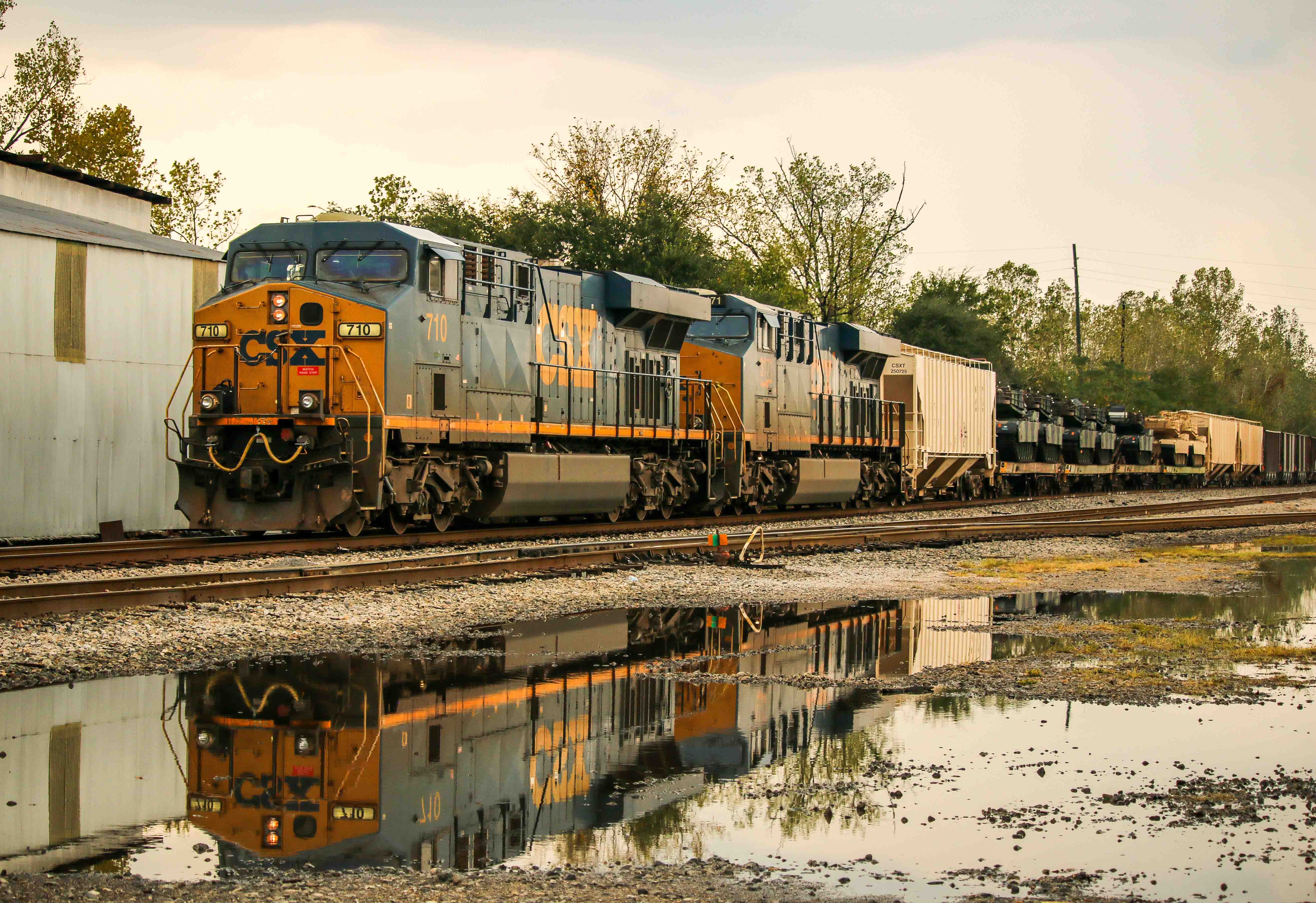 Close to the yards and facilities of CSX at Montgomery, Alabama, GE Evolution ES44AH #710 sits awaiting a relief crew on 5 October 2019. The day was notable for the almost total lack of trains (only four in a seven-hour period!) and the torrential rainstorm that forced me to take shelter in a multi-storey parking garage close to the old Union station for around three of those hours. On the bright side, the puddles from the storm rather enhanced the pictures of this train! 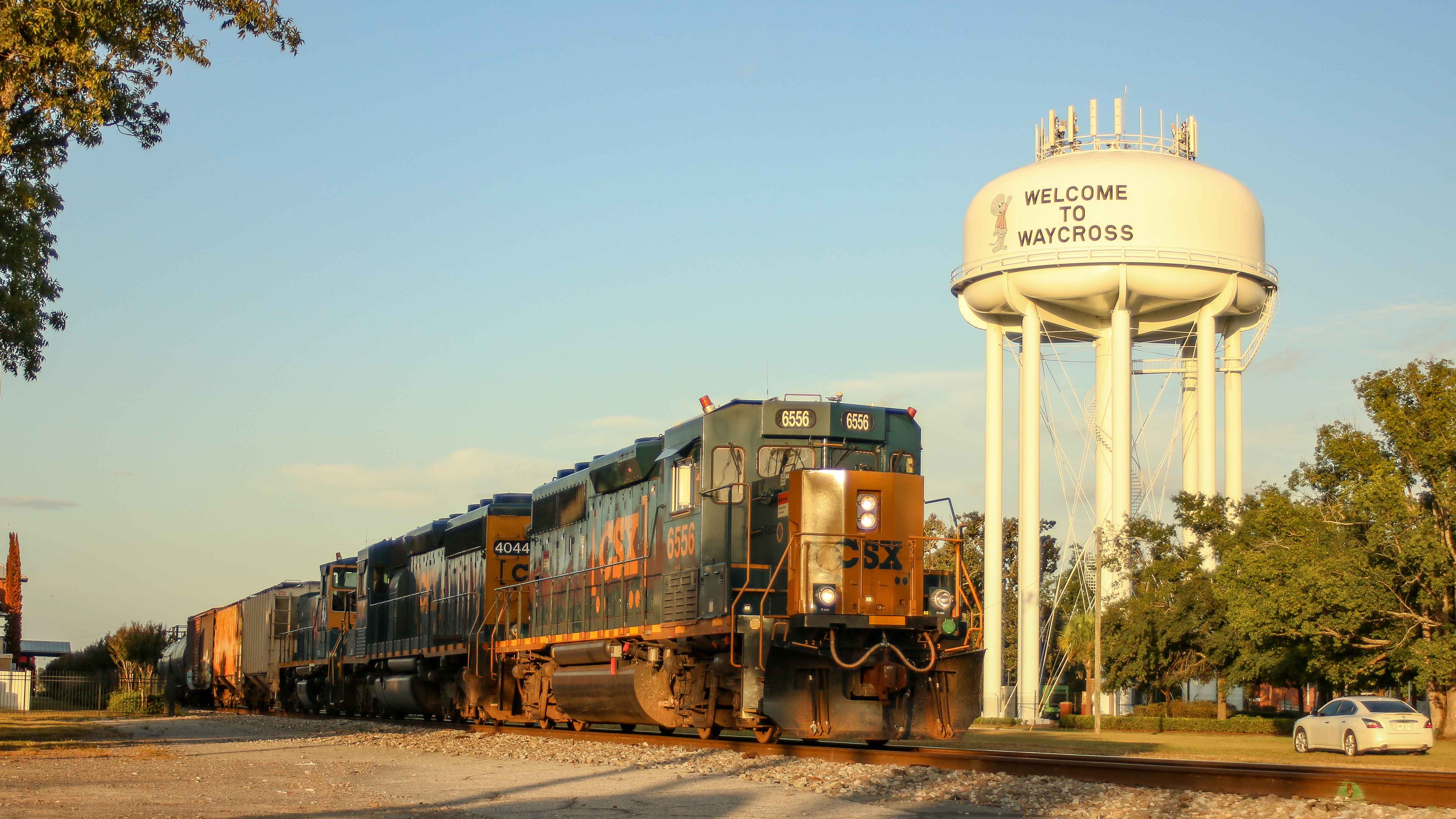 Welcome to Waycross, Georgia! Just a mile away from Rice Yard, EMD GP40-3 #6556 runs past the City’s long closed passenger depot on the former Atlantic Coast Lines route from Jesup on 8 October 2019. Behind the GP40-3 is #4044, an elderly and rebuilt EMD SD40-3 along with an unidentified SW series switcher. 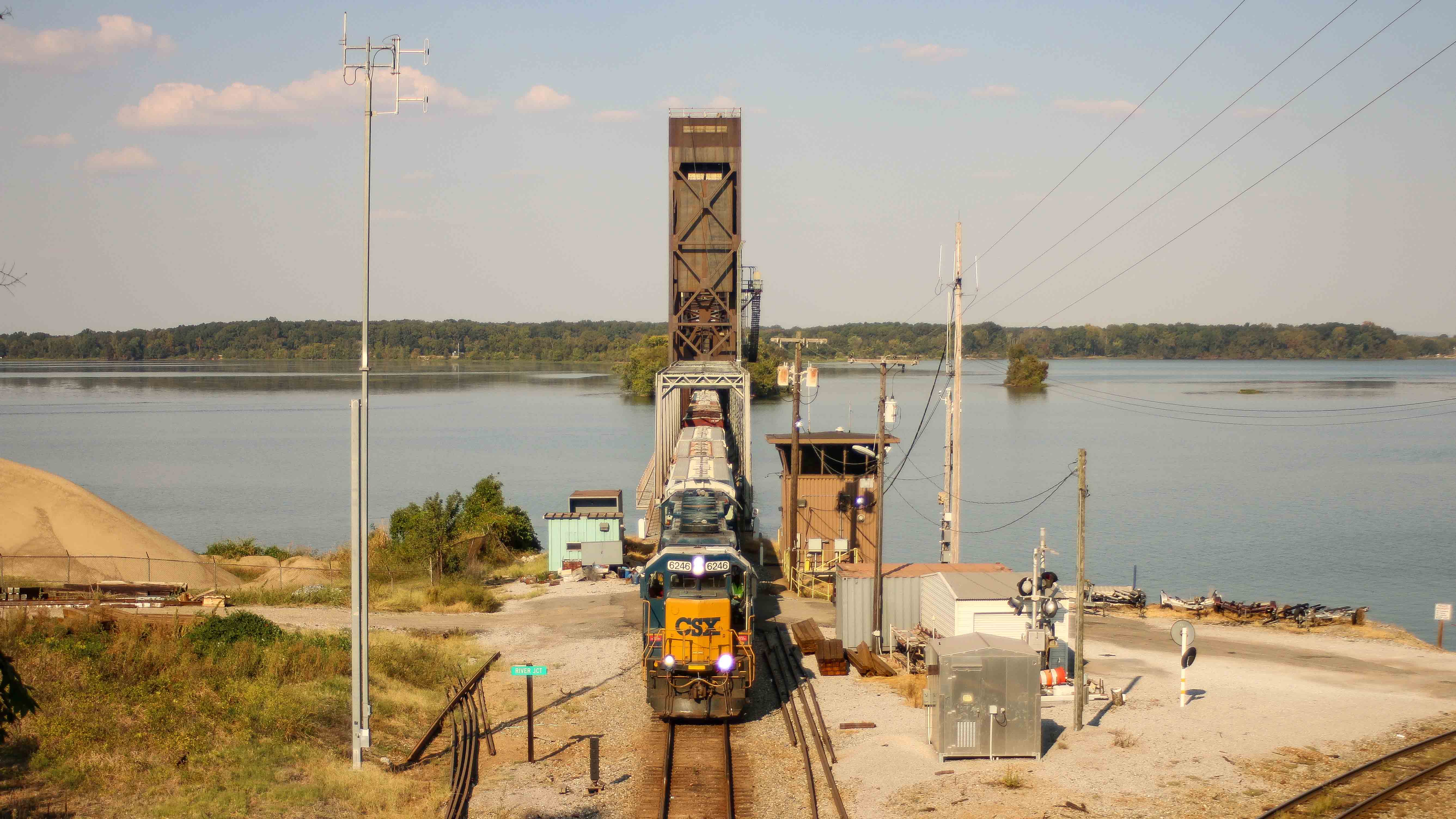 CSX trains on the tracks from Birmingham, Alabama to Nashville, Tennessee cross the Tennessee River at Decatur, Alabama on a massive lift bridge that is actually owned by the Norfolk Southern Railroad and lies on their route south from Chattanooga. An ex-Baltimore and Ohio EMD GP40-2 crosses on 3 October 2019. 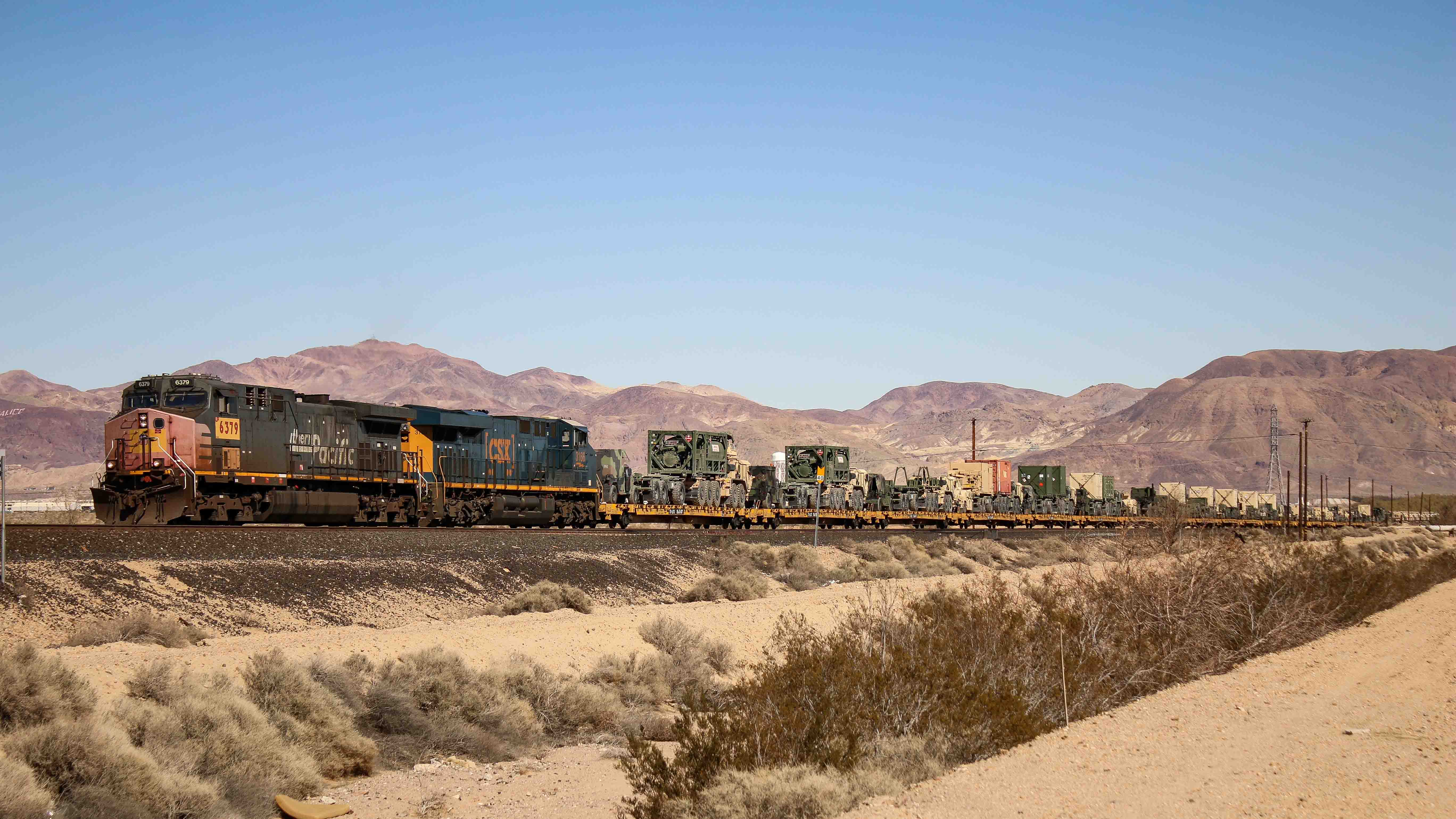 On Union Pacific rails at Daggett, California, this train of military hardware has just left the US Marine Corps. logistics depot at Yermo, a couple of miles to the north. Leading is a patched former Southern Pacific GE C44AC, #6379, accompanied by CSX #3166, a GE ES44AH new in 2013. The CSX unit was a long way from home on 11 February 2019. 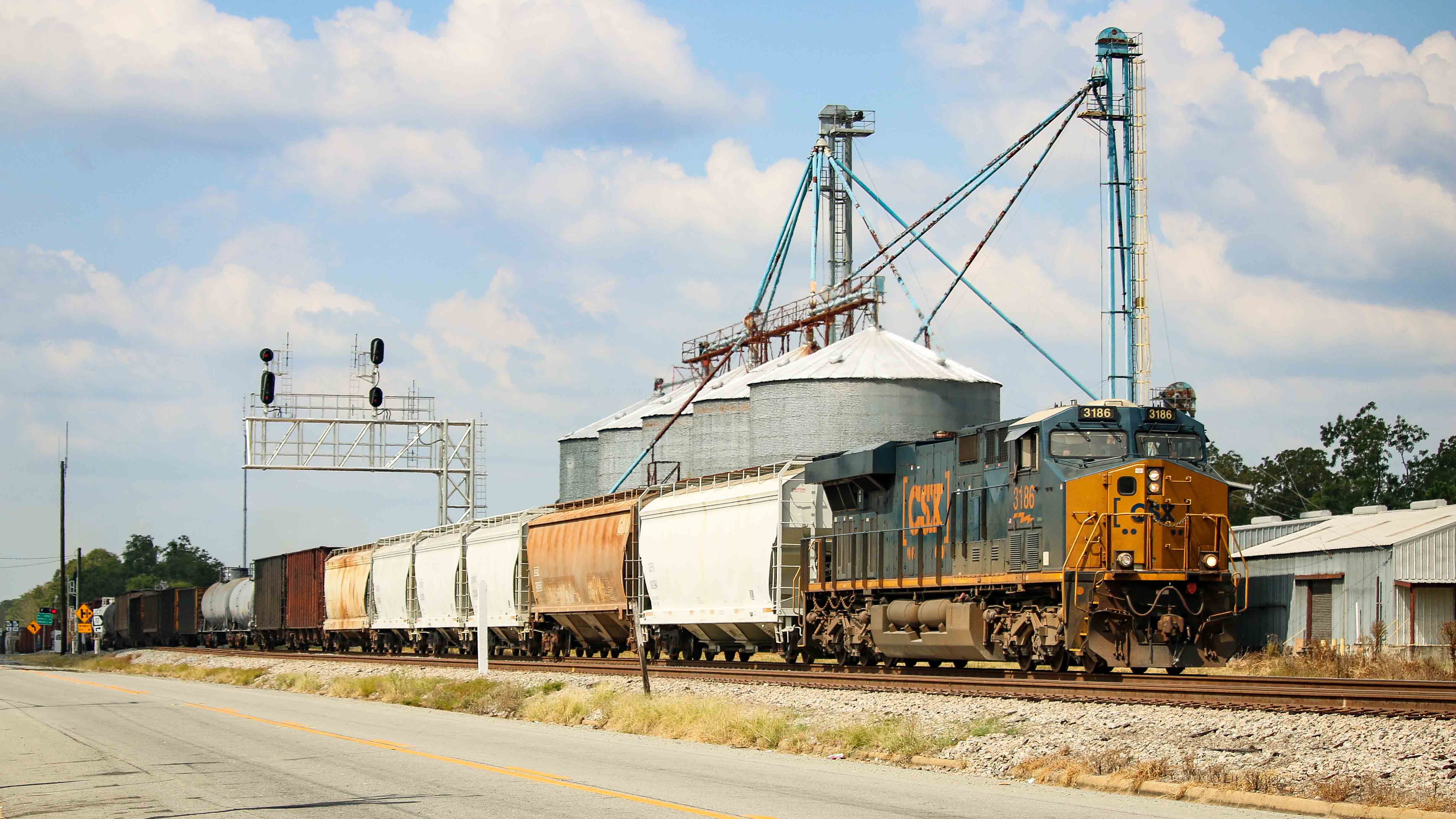 The grain silo at Rebecca, Georgia, stands tall as GE ES44AH #3186 passes with an eastbound manifest train on 28 September 2019. The sight of a single locomotive handling such a train is rather unusual to those who photograph trains in the Western United States, I’d imagine it would be a bit of a struggle climbing the 1:40 grade out of Mojave in the California Desert.

Two EMD SD40-3 rebuilds, #4023 and #4063 power through Folkston, Georgia on 9 October 2019. The train will shortly bear right and head north-west towards Rice Yard at Waycross where the box cars and hoppers will be split and reformed into other trains on the hump yard. 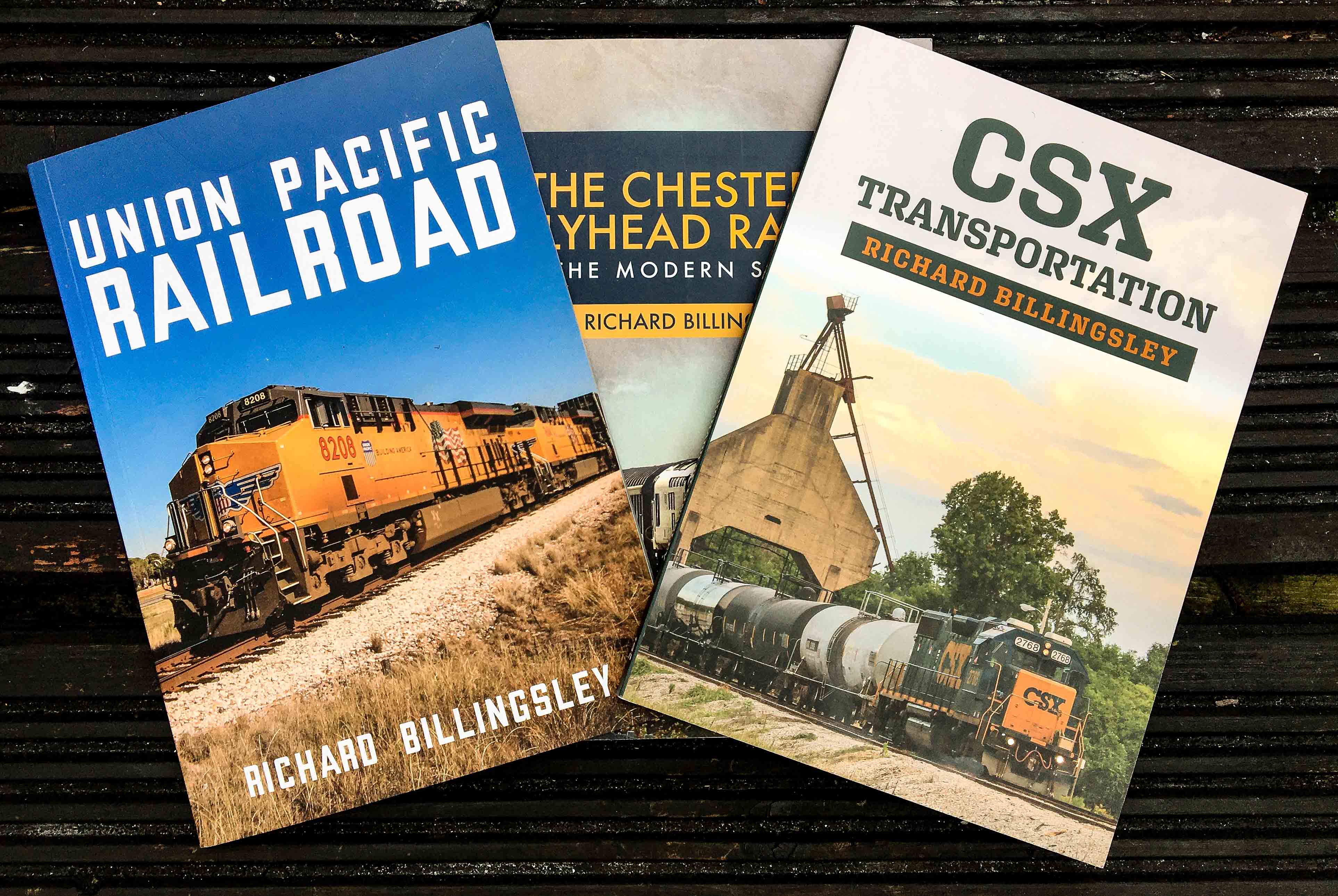 CSX Transportation is available to buy direct from Amberley Books and via a number of UK and US book retailers. For further information, see: https://www.amberley-books.com/community-main-page/b/community-richard-billingsley/csx-transportation.html

Amberley Books have a wide range of UK, US and European railway titles. A while back we chatted to one of their editing team about what it takes to go from railfan to writer, which you can read here: https://www.wearerailfans.com/c/article/railfan-to-writer