One of the “Big Three” American steam locomotive builders, Alco also was at the forefront of development of diesels for switching duty.

Alco – the American Locomotive Company – was one of America’s “Big Three” locomotive builders in the great age of steam. Created in 1901 through the merger of seven 19th century steam builders, including notables such as the Brooks Locomotive Works and Cooke Locomotive & Machinery Works, Alco was headquartered in Schenectady, New York, and it was there that the company maintained a sprawling locomotive works. Among the tens of thousands of steam locomotives that would roll out from Alco’s Schenectady plant between the company’s formation and construction of its last steam locomotive in 1954 were the likes of New York Central’s renowned J-class Hudson and S-class 4-8-4 Niagara, Southern Pacific’s brutish and powerful three-cylinder 4-10-2s, and, perhaps most famous of all, Union Pacific’s magnificent trio, the FEF-class 4-8-4, stylish 4-6-6-4 Challenger, and great 4-8-8-4 “Big Boy.”

Alco’s initial foray into diesel locomotive building occurred during the 1920s in concert with General Electric (which provided electric gear) and Ingersoll-Rand (which provided the power plants) and took the form of a series of squarish “box cab” diesels. Built between 1924 and 1928, these diminutive box cab locomotives ranged from 300-horsepower, 60-ton locomotives to 600-horsepower, 100-ton units. In limited numbers (a total of 33 were built), the box cabs went to work for roads including the Jersey Central, Long Island, Erie, Chicago & North Western, Great Northern, and Baltimore & Ohio, as well as industrial firms. With few exceptions, the box cab diesels were earmarked for switching duty in dense urban settings where railroads were being pressed to replace smoky steam power. Among these pioneering box cabs, Central Railroad of New Jersey No. 1000, built by Alco in 1925, is today preserved and on display at the Baltimore & Ohio Railroad Museum in Baltimore, Maryland.

Alco produced its first pair of diesel switchers in what became an industry-standard design concept – with the crew cab at one end of a narrow-hood with side walkways – in 1931. And the two locomotives also helped introduce the McIntosh & Seymour diesel powerplant that would become an Alco staple for years to come (engine builder McIntosh & Seymour had been acquired by Alco in 1929). Lehigh Valley No. 103 was a 300-horsepower switcher which also introduced Alco’s new lightweight two-axle Blunt truck design. Alco demonstrator No. 600 (later to become New Haven 0900) was a larger, 600-horsepower switcher. Soon to follow, and constructed from 1931 through 1940, was Alco’s distinctive line of HH-series diesels that were known as “High Hoods” for their tall carbody, and which ranged from 600 to 1,000 horses. The resulting sales numbers were again modest, with a total of 176 HH-series switchers built.

Then, beginning in 1940, came Alco’s new S-series diesel switcher line which would, over multiple models and the following two decades, tally handsome orders from America’s railroads and make the Alco switcher a frequent and welcomed sight for railroad enthusiasts of the era. An evolutionary refinement of the HH series, the new S series visually featured a lower and more attractive hood and was powered by Alco’s six-cylinder M&S 539-series engine. The Alco S1 offered 660 horsepower and its sister, the S2, thanks to turbocharging, delivered 1,000 horsepower. Aside from minor differences in radiator size and such, the two models looked very much like twins.

In a decade-long production run, 540 examples of the S1 would be built, while the S2 recorded more than 1,500 units sold. As exemplified by their ten-year production runs, the S1 and S2 were capable and reliable diesel switchers that would serve their owners long and well. Nearly 100 companies, ranging from Class 1 railroads to industrial firms, and even the Margam Steel Works in Wales (owner of five units), purchased the S1. The New York Central (71 units) and New Haven (65 units) were by far the most prolific buyers. The S2, meanwhile, was purchased by more than 100 companies, with New York Central, Southern Pacific, and Santa Fe acquiring large rosters of more than 70 units each.

It should be noted that the sales numbers of these early S-series switchers were undoubtedly enhanced by the fact that during World War II, competitor Electro-Motive was assigned, by the U. S. War Production Board, to build only road freight diesels, which is to say its landmark FT. But also worthy of note is that it was the Alco S2, in lengthened form to accommodate a short hood ahead of the cab and equipped with road rather than switcher trucks, that was the basis of America’s standard-design road-switcher, the 1,000-horsepower RS1 of 1941.

In 1950, Alco freshened up its switcher catalog, with the S3 replacing the S1 and the S4 replacing the S2. Horsepower of the two models remained the same, as did their use of the 539-series engine, and changes were modest. Most notable visually was replacement of Alco’s Blunt switcher truck with AAR Type A trucks. A total of 287 S3 units would be sold, and the S4 would tally 785 sales. During the years of S-series production, units of similar design were also built by Alco’s Canadian subsidiary, the Montreal Locomotive Works. Beginning in 1954, Alco replaced its venerable M&S 539-series engine with Alco’s new 251-series diesel powerplant, and new switcher models S5, S6, and T6 would follow. With demand for pure switchers beginning to wane and the company’s position in the market increasingly troubled, these switchers were built in modest numbers until Alco ended locomotive production in 1969. Pleasingly, and rather remarkably, though, several dozen venerable Alco S-series switchers either are still in use on short lines or are preserved today at museums or on tourist lines.

For many train-watchers, beginning in the 1940s and for a half-century and more thereafter, the Alco S-series switchers became much like familiar and welcome friends. The 539-series engine had its own distinctive and quick-paced voice, which many described as a “chortle,” and like virtually all Alcos, the diminutive diesel switchers could be counted on from time to time to lay out an impressive exhaust plume, especially when accelerating with a cut of cars.

For me, identifying a single favorite Alco switcher is an easy task … it was an S1, Alco builder number 69515, constructed in November 1941 for the Tennessee Central Railway. I first met the aged Alco, which was the Tennessee Central’s second diesel locomotive and carried TC road numeral 51, in May 1968. I was a young teenage railfan, the Alco was 27 years into its career, and the bankrupt Tennessee Central was dying. Indeed, the 280-mile TC was in its last fleeting summer when I visited the railroad’s small yard in Nashville and took a photograph of the black and silver No. 51 during what amounted to a railfan’s version of a funeral wake. But for this S1, life, it turned out, was far from over.

After the Tennessee Central ceased operations on August 31, 1968, the S1 was purchased, for $7,500, by the nearby 10-mile-long Cadiz Railroad located in western Kentucky. Soon wearing Cadiz number 8 and a light yellow and blue livery, the S1 became a familiar fixture on the friendly short line. During the 1970s, I visited the Cadiz Railroad, and No. 8, on many pleasant occasions. Thanks to always gracious Cadiz Railroad President Stanley “Stan” White, I even enjoyed a cab ride aboard the Alco on Christmas Eve of 1975. Cadiz No. 8 was not retired until, sadly, the little railroad itself was abandoned in 1985. Today, No. 8, in fading yellow and blue paint, rests silent and perhaps lonely on display along the now-empty Cadiz right-of-way. A far better fate for the S1 than the scrap yard for sure, but I much prefer to recall the petite Alco gurgling and bobbing along on Cadiz tracks, which, shall we say, were less than certain, between Cadiz and the railroad’s connection with the Illinois Central at Gracey, Kentucky.

Cadiz No. 8, like all its hundreds of Alco switcher kin, could always be counted on for a memorable show. 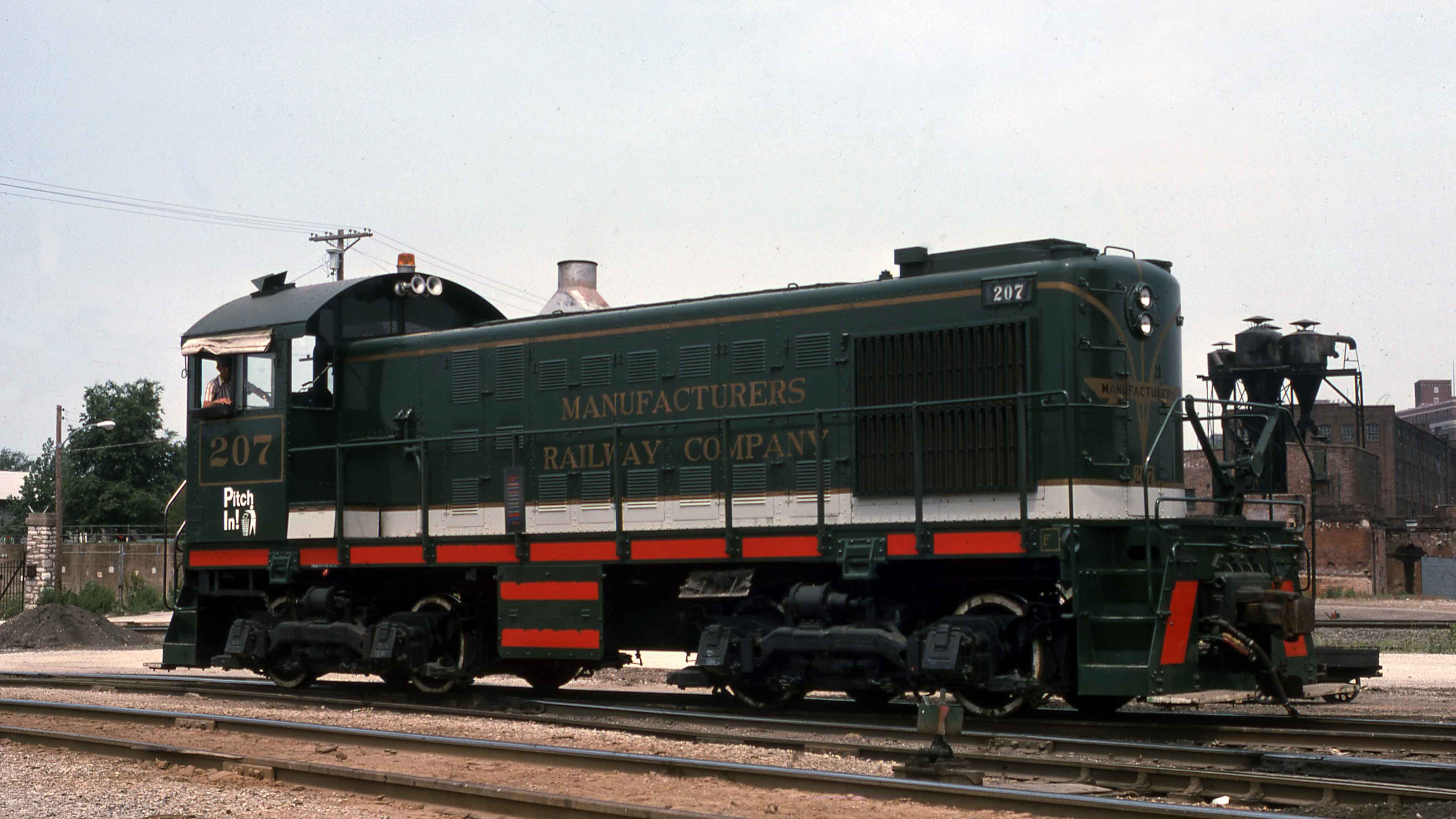 The classic and familiar lines of Alco’s successful S-series diesel switchers are revealed, in very spiffy form, by Manufacturers Railway Company Alco S2 No. 207, photographed in St. Louis, Missouri, in 1975. Chortling away under the hood of the switcher is a 6-cylinder, 660-horsepower M&S 539-series powerplant, and the locomotive rides atop Alco’s distinctive Blunt design trucks. The Manufacturers Railway had been founded by Adolphus Busch (of Anheuser-Busch), and the switching road long served the famed Anheuser-Busch and Budweiser St. Louis breweries until the railroad ceased operations in 2011. Photo: Dolzall collection. 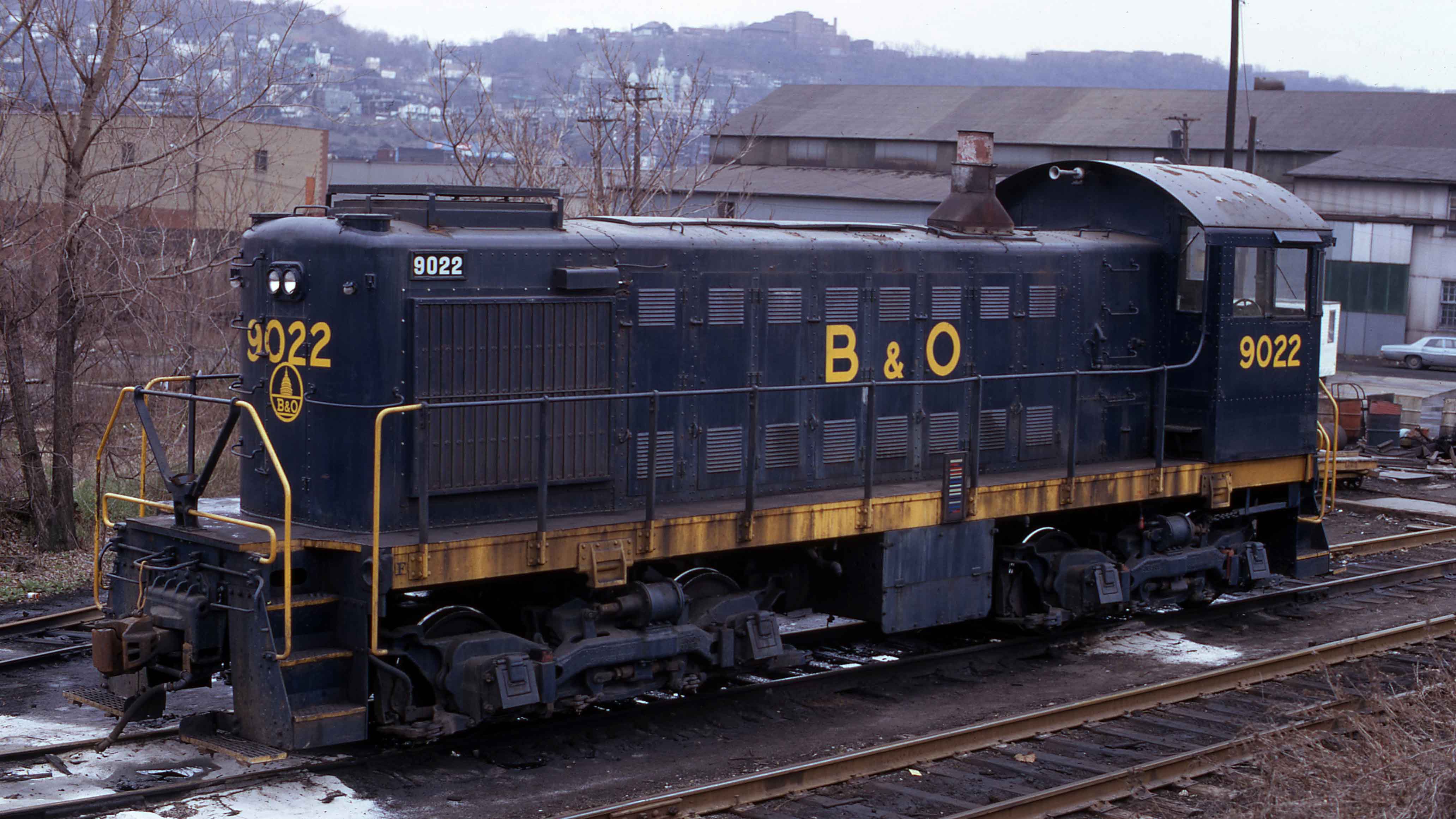 The Baltimore & Ohio was a robust customer for Alco’s S-series diesel switchers and rostered 59 S2s such as B&O 9022, which posed at Pittsburgh, Pennsylvania, in May 1973. B&O 9022 was a war baby, constructed at Schenectady in May 1943, and its retirement would not come until the late 1970s, just one example that the Alco switcher was truly a capable and reliable locomotive. Photo: Dolzall collection. 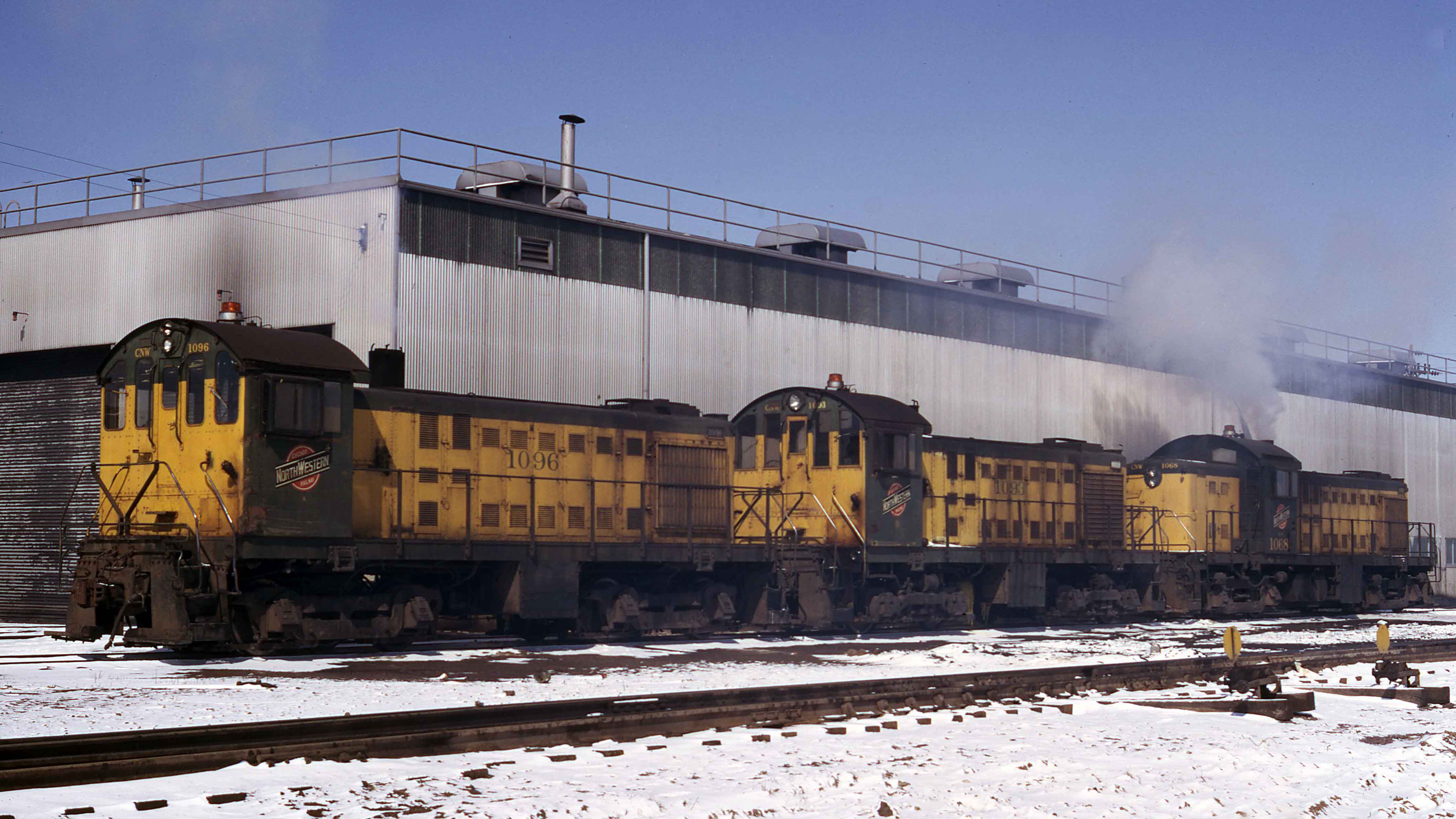 In a remarkable 1974 photograph captured at the Chicago & North Western’s Butler (Wisconsin) engine terminal near Milwaukee, the line-up of locomotives represents something of an evolutionary record of Alco diesel production. In the center of the trio is C&NW S2 1093, constructed in 1944; nearest the camera is C&NW S4 1096 built in 1951 (notice its use of standard AAR Type A trucks); and happily smoking away at the far end of the trio is C&NW 1068, a 1953 example of the landmark road-switcher, the 1,000-horsepower RS1, which largely owed its origins to Alco’s switcher line. Photo: Dolzall collection. 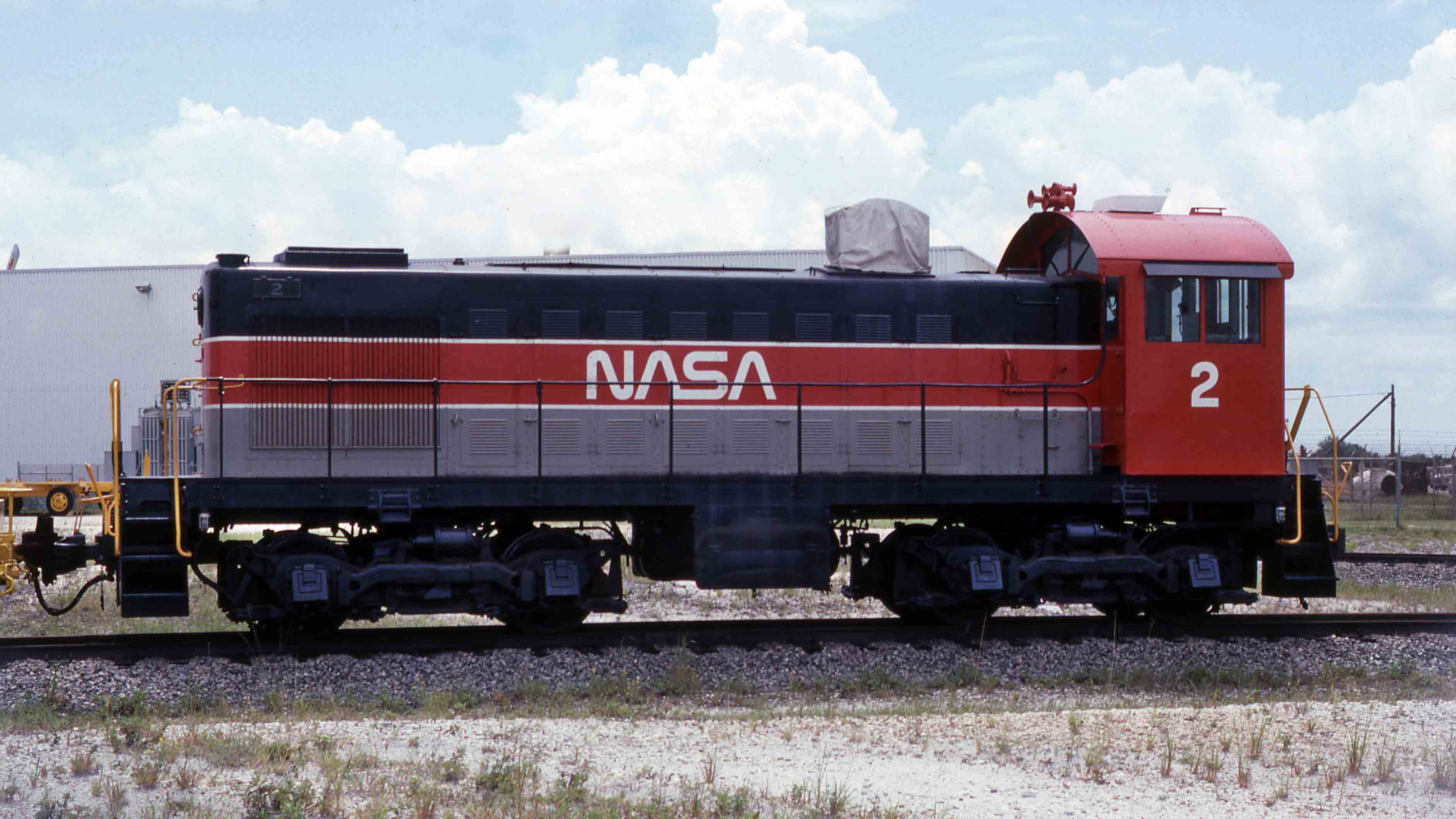 NASA Alco S2 No. 2 was originally built for the United States Army and was one of a group of Alco switchers assigned to work at the Kennedy Space Center in Cape Canaveral, Florida. Recorded in this photograph at the historic space center from which Apollo moon missions and Space Shuttle flights departed, the Alco served decidedly uncommon tasks, including the transport of spacecraft components and fuels. Today, the Alco is preserved at the Gold Coast Railroad Museum in the Miami area. Photo: William F. Schnaiter; Dolzall collection. 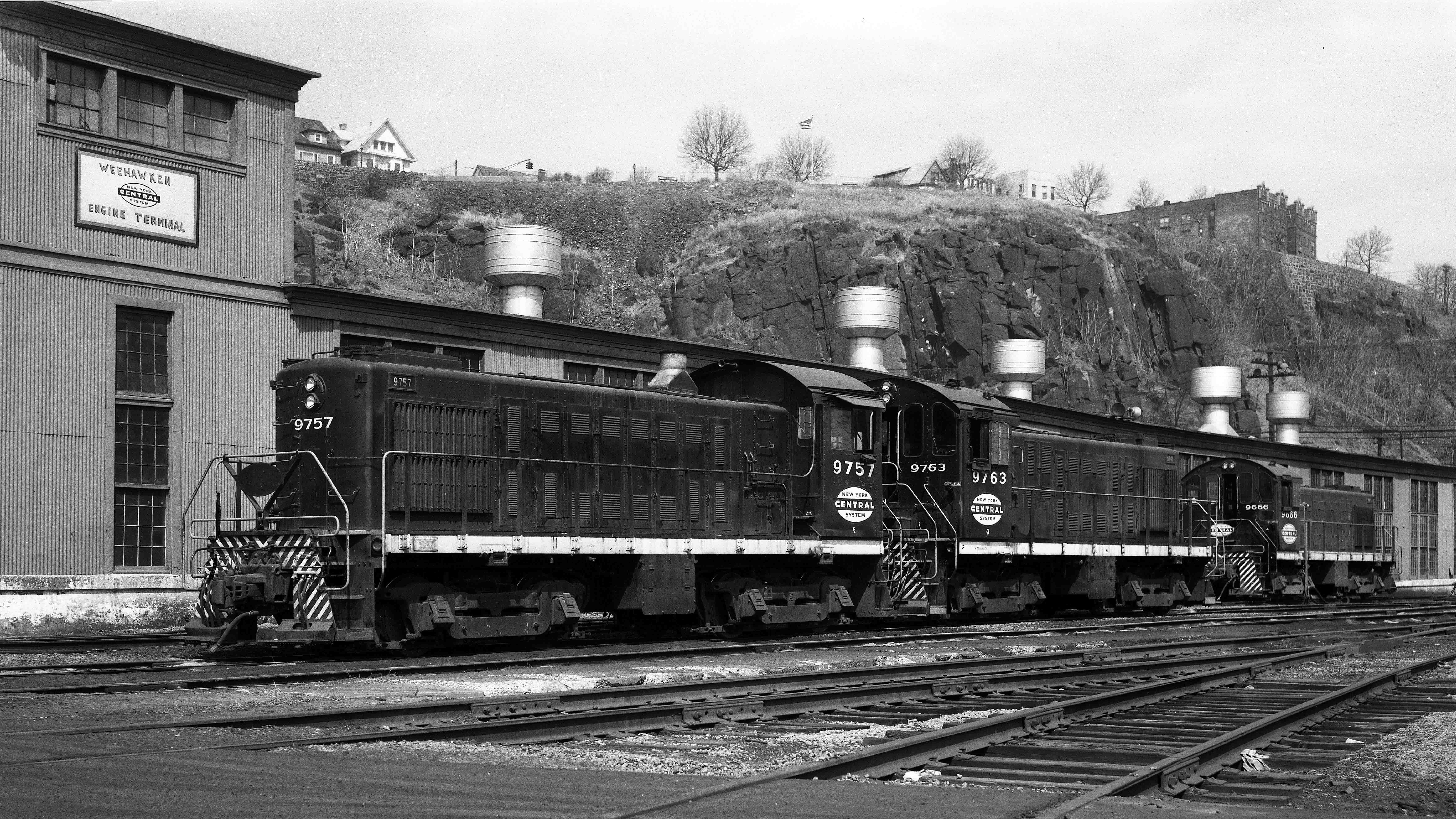 In April 1968, a trio of New York Central Alco S4 switchers gather at the railroad’s Weehawken (New Jersey) engine terminal, a location that was a regular and fertile haunt for railfan photographers during the 1960s. With Alco’s Schenectady plant located near the NYC main line, the eastern giant was a dedicated Alco customer in both the steam and diesel eras. Across models S1, S2, S3, and S4, New York Central rostered 234 Alco diesel switchers. Photo: Dolzall collection. 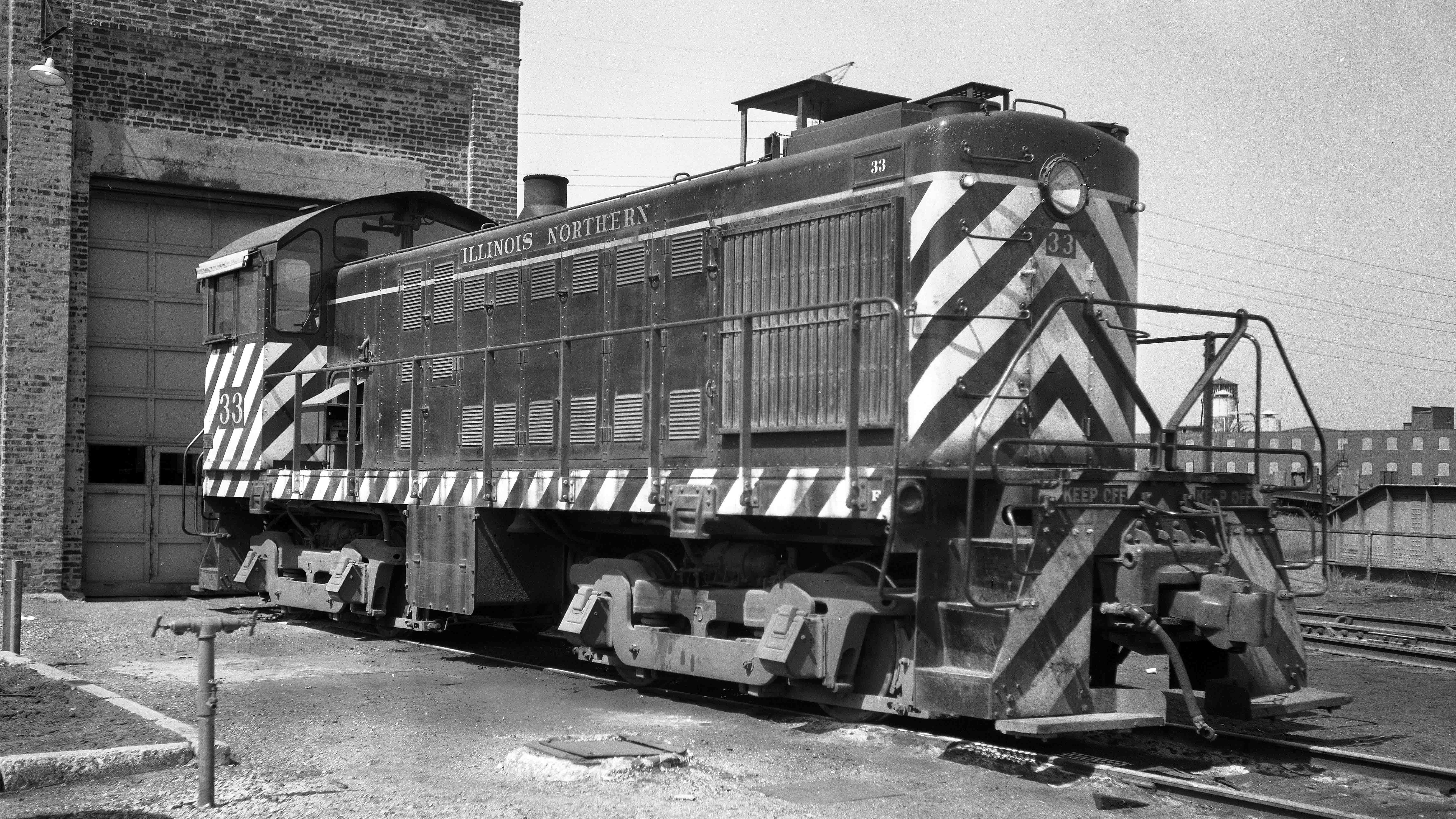 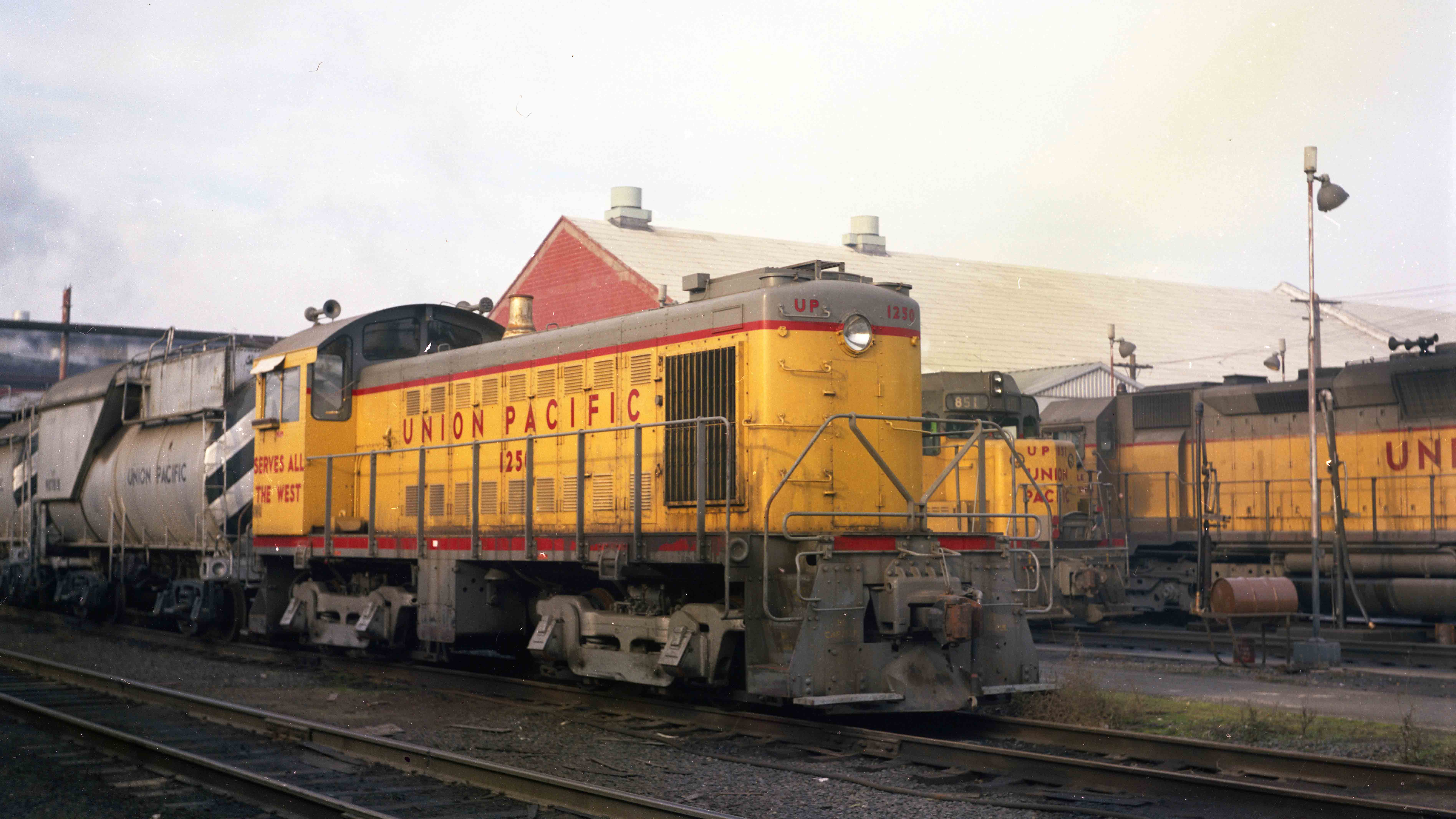 Uncommon on several counts is Union Pacific No. 1250, which was the lone Alco S3 switcher to serve giant Union Pacific. Built in 1950 for Oregon’s Mount Hood Railroad (as the short line’s No. 50), the 660-horsepower switcher joined the Union Pacific when the UP acquired the entire Mount Hood Railroad in 1968. UP 1250 stood in the engine terminal at Portland, Oregon, on November 29, 1970, and with the rare Alco, a GP30, and a massive UP EMD DD35A all present, who among us would not like to revisit that place and time? Photo: Dolzall collection. 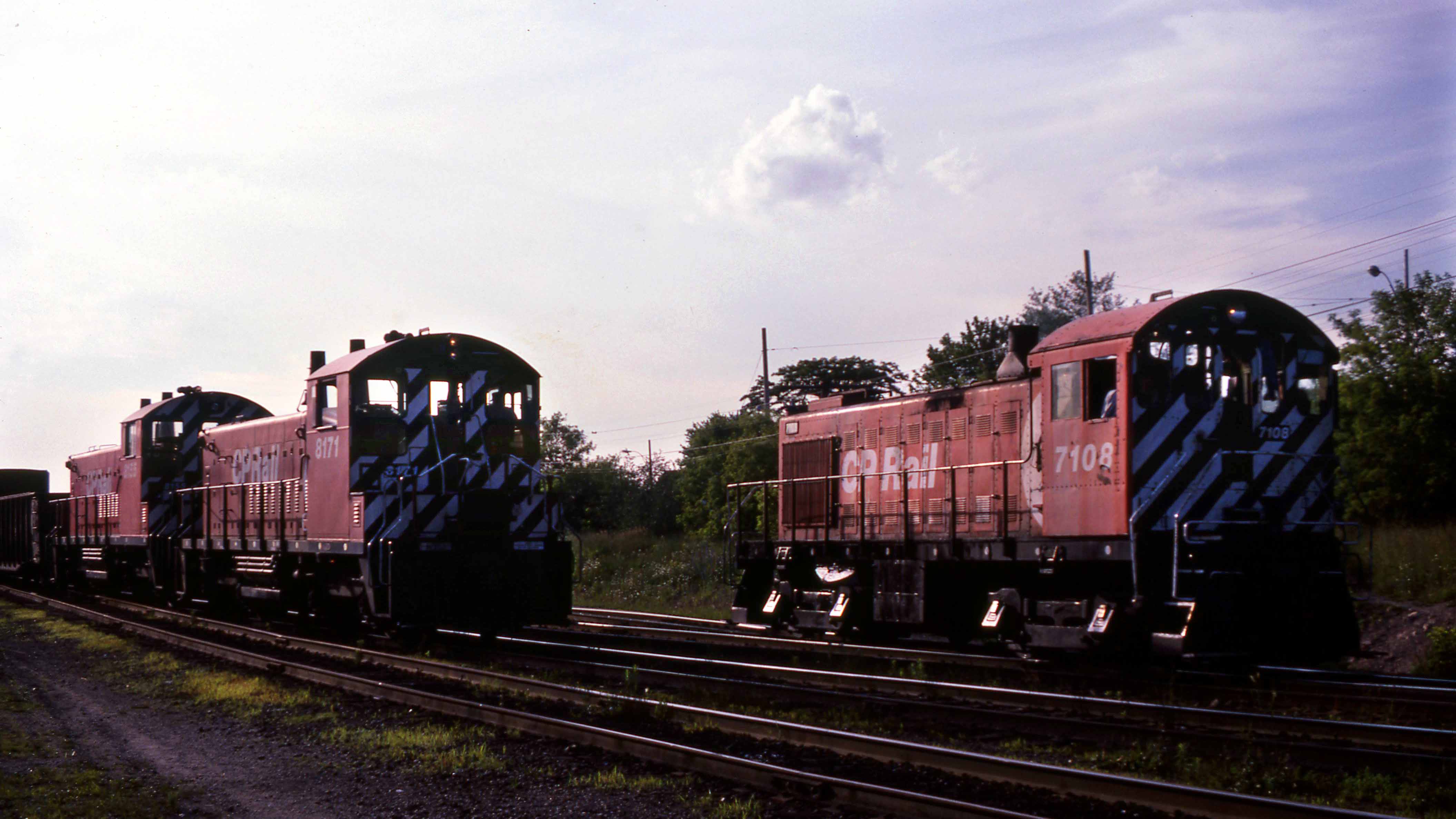 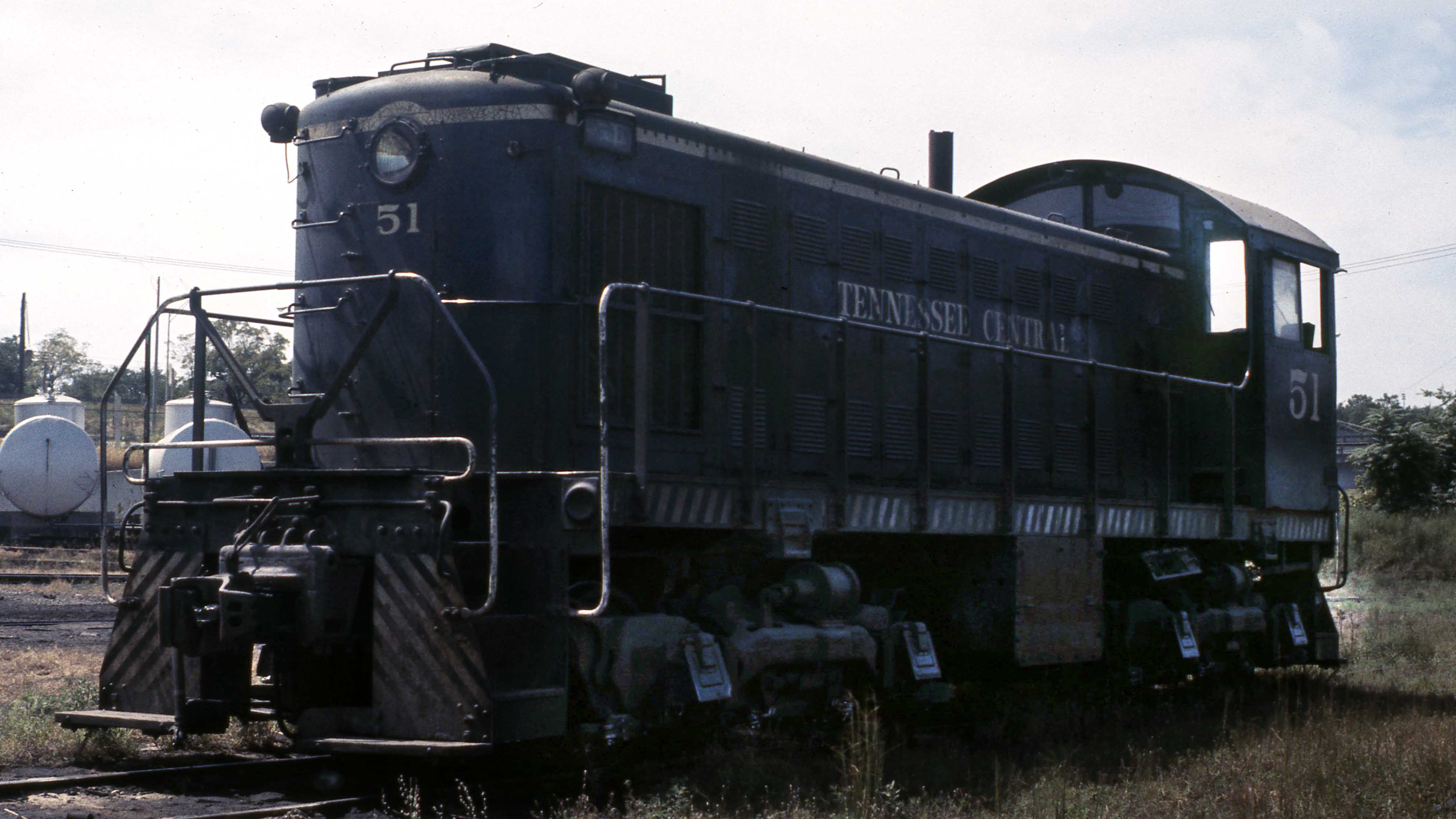 First meeting with what would become a familiar friend: As a young teen in May 1968, the author ventured to Nashville, Tennessee, to pay his respects to the dying Tennessee Central Railway and photographed TC Alco S1 No. 51, which had been the railroad’s second diesel when purchased in 1941. Little did the author then imagine that the venerable Alco would outlive the Tennessee Central and become a familiar and friendly sight in the next decade. Photograph by Gary Dolzall. 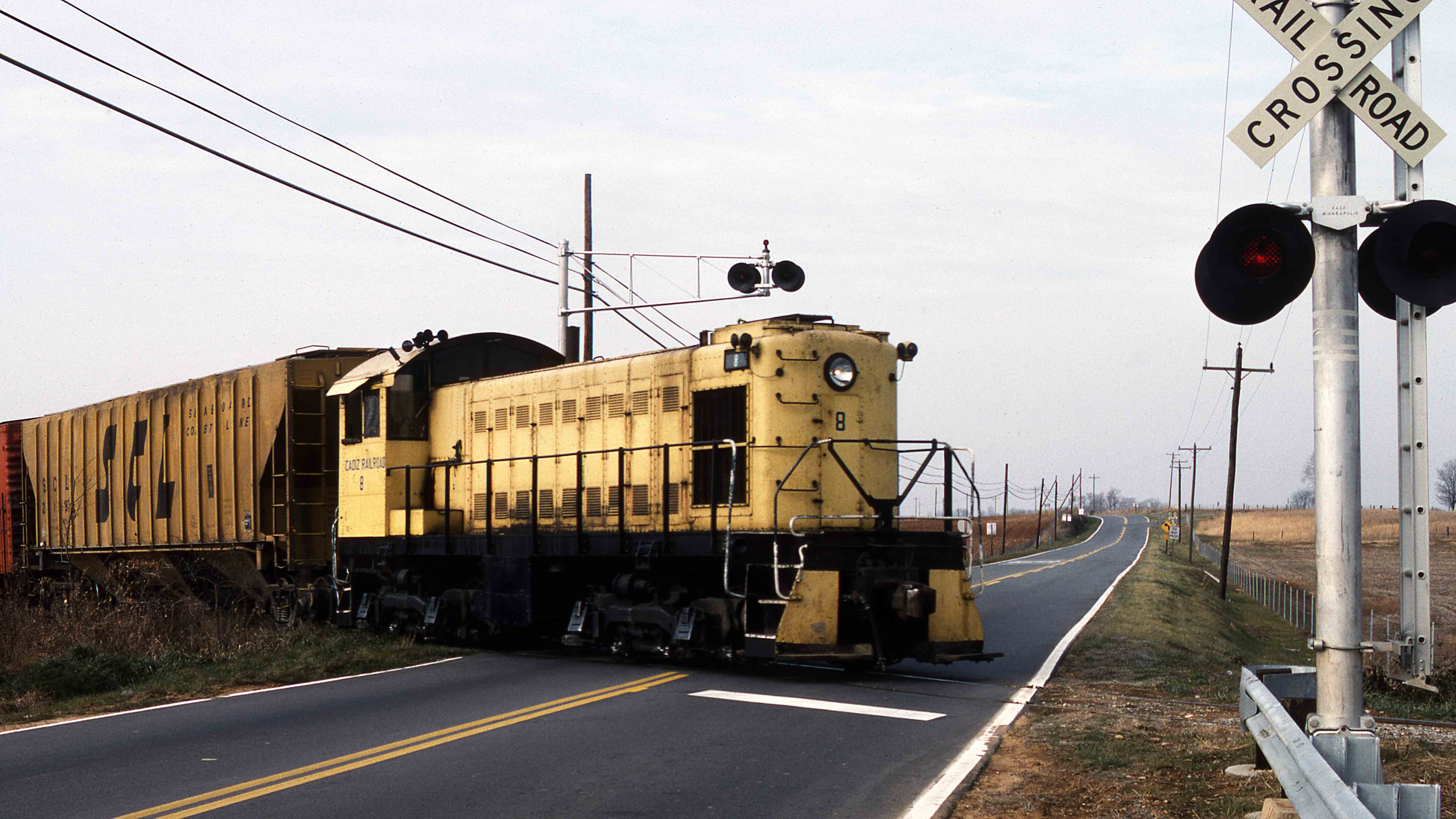 After the Tennessee Central ran its last train on August 31, 1968, the nearby 10-mile-long Cadiz Railroad in western Kentucky purchased TC Alco No. 51 for $7,500. Freshened up in yellow and blue colors and wearing Cadiz No. 8, the petite Alco became a mainstay on the short line (above). A frequent visitor to the Cadiz in the 1970s, the author was even welcomed aboard the S1 for a Christmas Eve 1975 cab ride by the railroad’s genial and gracious President, Stan White (the gentleman on the left in the photo below). Both photographs by Gary Dolzall. 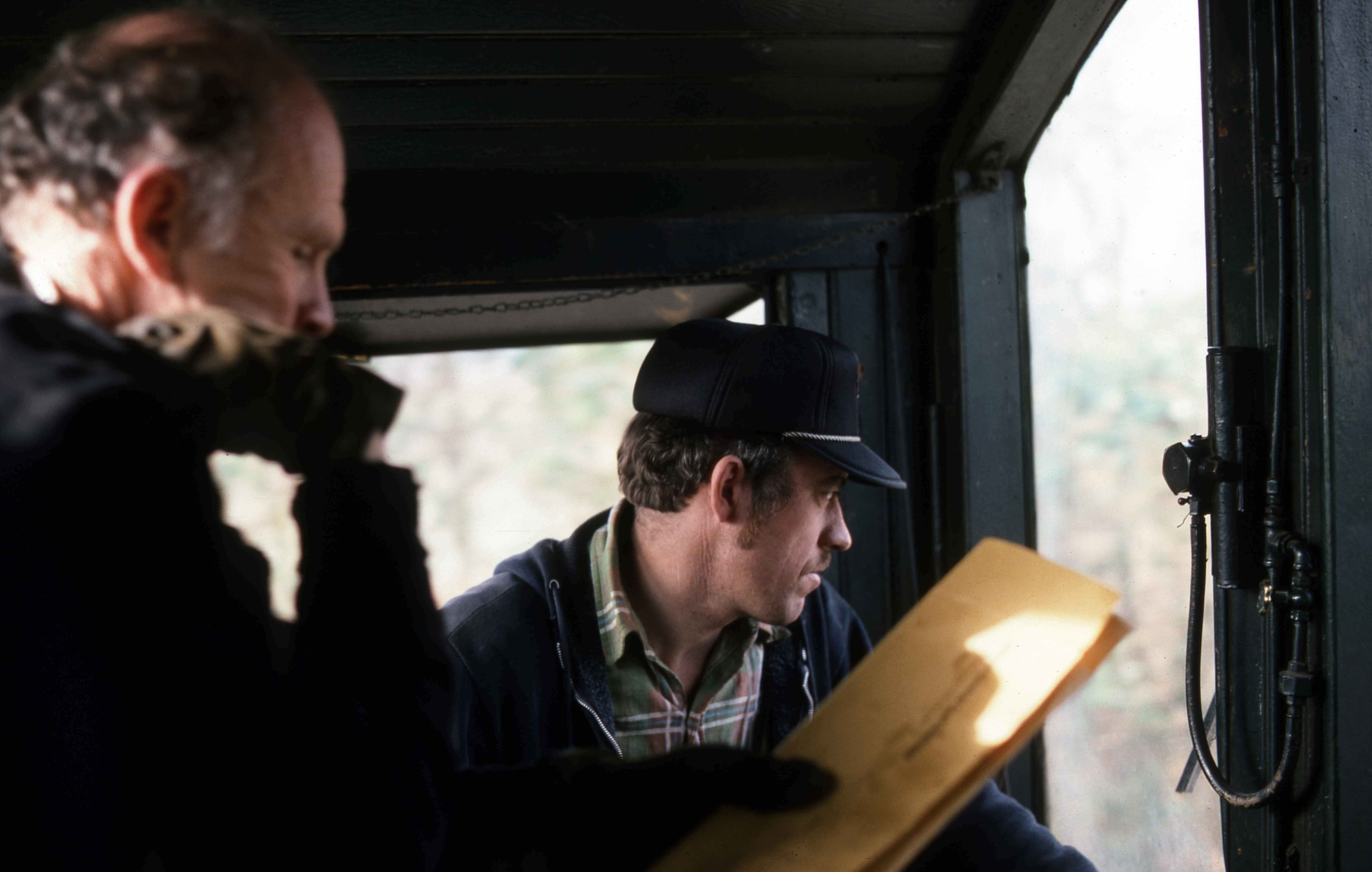