Words and photos by Gary Dolzall

The famed New Haven Railroad’s mainline between the railroad’s namesake city and Boston was known as the “Shore Line” for a reason. Between New Haven, Connecticut, and Boston, 157 route miles, the multi-track main line of the NYNH&H was frequently within a stone’s throw of the sandy beaches of Long Island Sound and the Atlantic Ocean.

Today, what was New Haven’s Shore Line is a busy – and remarkably scenic – portion of Amtrak’s Northeast Corridor and is host to Acela and Northeast Regional services, plus, depending upon location, the commuter trains of Connecticut’s Shoreline East or Boston’s Massachusetts Bay Transportation Authority (MBTA).

For the traveler, and for the railfan, numerous Connecticut locations along the northern reaches of the Northeast Corridor offer the experience, on a fine summer day, of sun, sand, and high-speed railroading – and among the finest of such vistas is found at the small, charming town of Niantic.

At Niantic Bay, the Northeast Corridor traces along the mile-long crescent-shaped public Niantic boardwalk and beach. At the east end of the beach, the railroad crosses the Niantic River via a bascule bridge. For train-watchers, the impressive bridge (known as the Nan moveable bridge) is a double delight: it is not only an impressive prop for photography but, because it is kept in open position except when rail traffic is expected, it provides an early warning of the next train’s approach. If the bridge is open, though, it’s time to enjoy sun and sand!

Once upon a time, a train-watcher at Niantic could have relished the passage of New Haven’s magnificent fleet of varnish, of trains named Merchants Limited and Mayflower racing behind the likes of NYNH&H’s streamlined Baldwin-built I-5 4-6-4s or, later, exotic Alco PA diesels. The portion of the Northeast Corridor north of New Haven was not electrified by Amtrak until 2000, and today, the route hums with Amtrak Northeast Regional and Acela trains. On a typical weekday nearly 40 Amtrak trains pass through Niantic every 24 hours. Niantic also witnesses the passage of trains operated by Connecticut’s aptly named Shoreline East commuter railroad, which is an entity of the Connecticut Department of Transportation (ConnDOT) and extends from New Haven 51

route miles east to New London, Connecticut. SLE accounts for approximately 20 additional trains per weekday passing through Niantic. Neither Amtrak nor SLE trains make station stops at Niantic, with the nearest served stations in each case being New London to the east and Old Saybrook to the west.

Traditionally, since Shore Line East’s inception in 1990, SLE trains were diesel-powered push-pull trains, but as of May 2022, SLE began use of Metro-North Kawasaki M8 electrics (as operated by ConnDOT and New York’s Metropolitan Transportation Authority). Many of the SLE locomotives and train sets previously used on the shore line route now work on ConnDOT’s New Haven-Hartford-Springfield CT Rail Hartford Line. Freight service on this portion of the Amtrak Northeast Corridor is handled via trackage rights by the Providence & Worcester (a Genesee & Wyoming company), but freight movements, especially during daylight hours, are relatively rare. Train-watching at Niantic, though, is all about flashy passenger trains, and in 2023, the action at Niantic promises to become even more compelling as Amtrak’s new generation of Alston-built high-speed trains enter regular service.

For the railroad photographer and train-watcher, Niantic offers both bustling train frequency and numerous lovely viewing and photography angles – and what could be better, between trains, than strolling the beach and boardwalk, catching some summer sun, and perhaps wading into the calm waves lapping up on the Connecticut shore?

Sun, sand, and Acela! Along the mile-long crescent-shaped bay and beach at Niantic, Connecticut, a Boston-bound Acela glides along the bustling Amtrak Northeast Corridor and sweeps past beach-goers under a beautiful summer sky in June 2021. 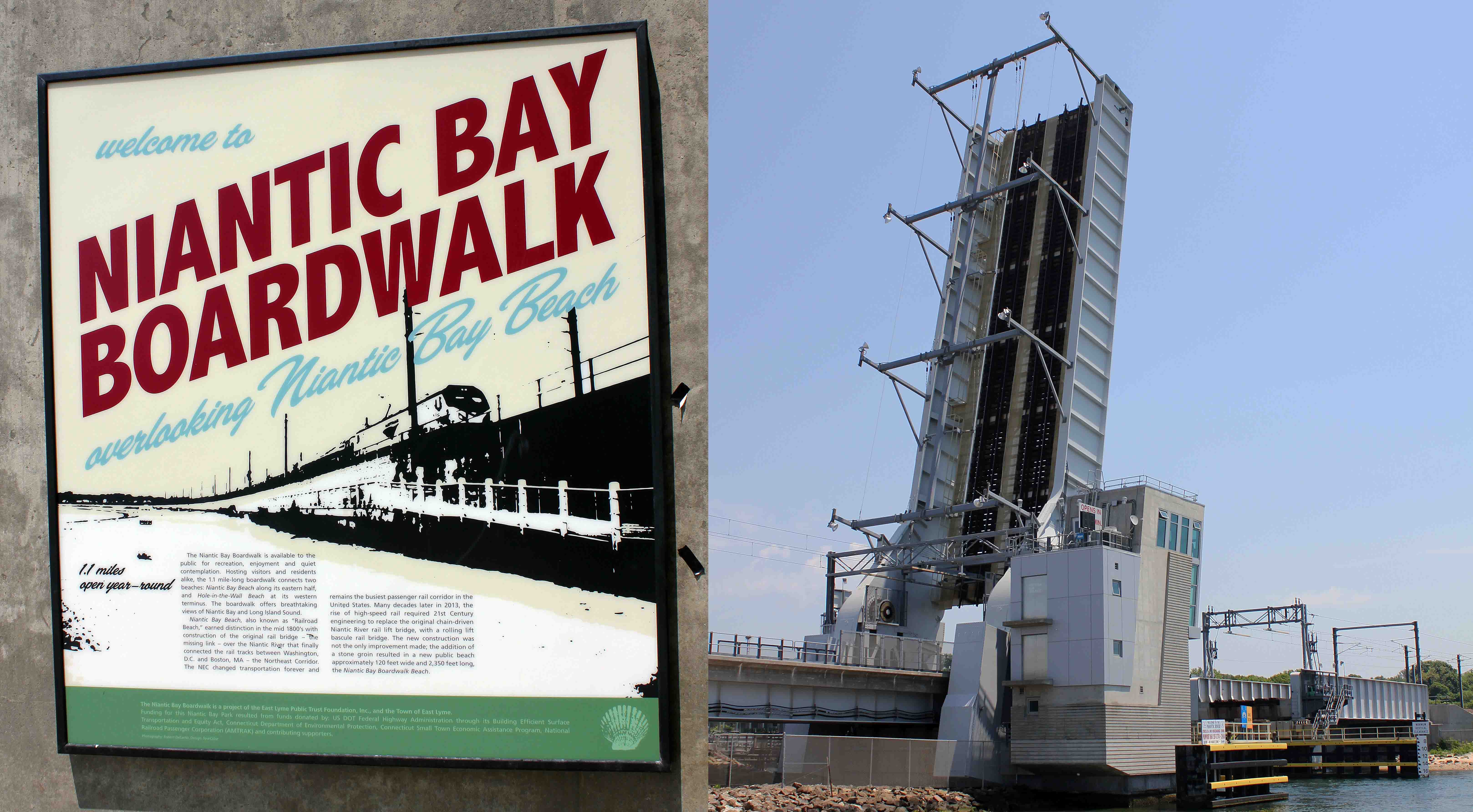 The appeal of a beautiful beach with a frequent passage of flashy passenger trains extends beyond the “card-carrying” railfan community, as exemplified by the sign welcoming visitors to Niantic Beach (left). At the east (north) end of Niantic Beach, the Northeast Corridor crosses the Niantic River on a massive bascule bridge (right). When the bridge is open, it’s time to enjoy sun and sand! 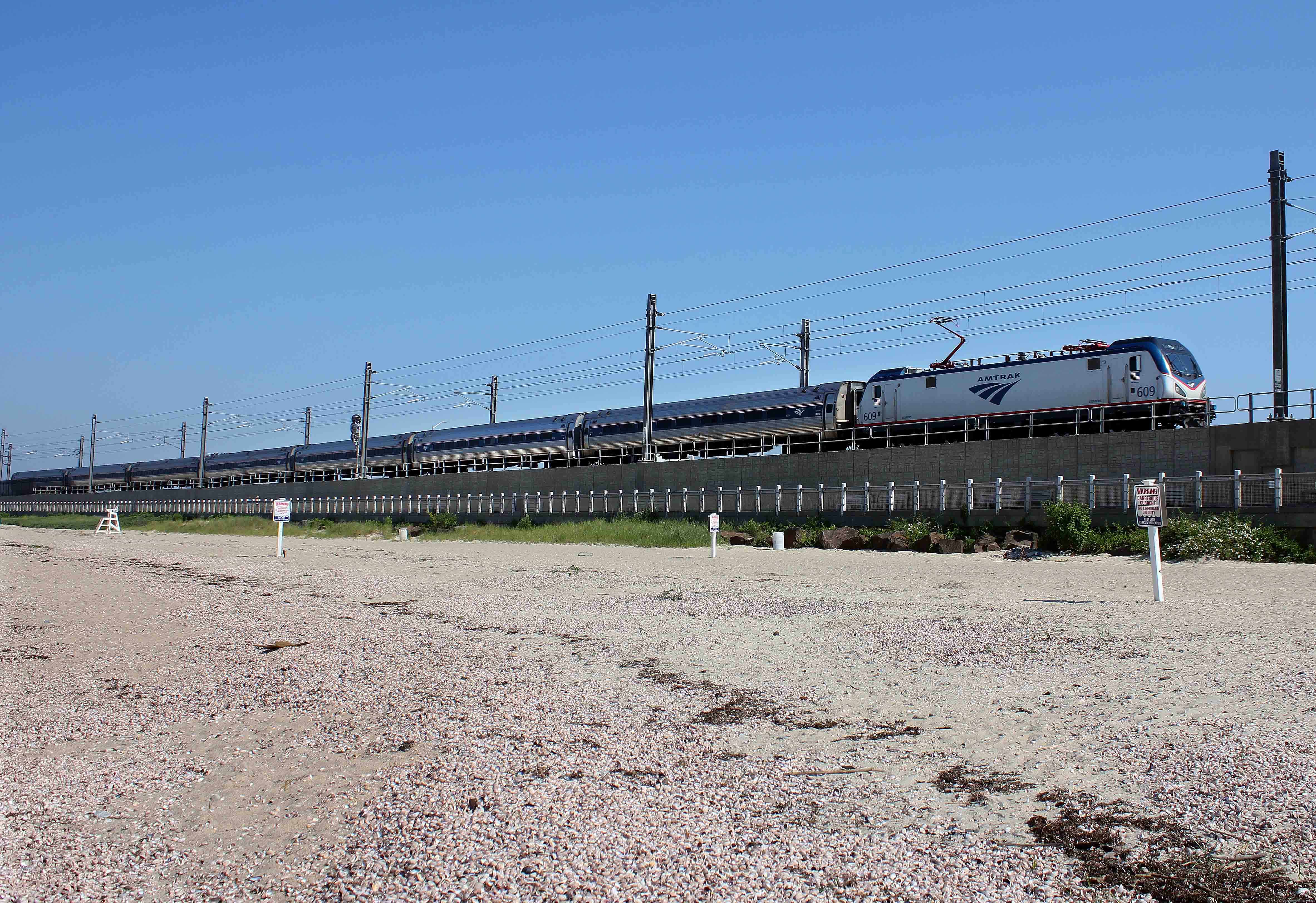 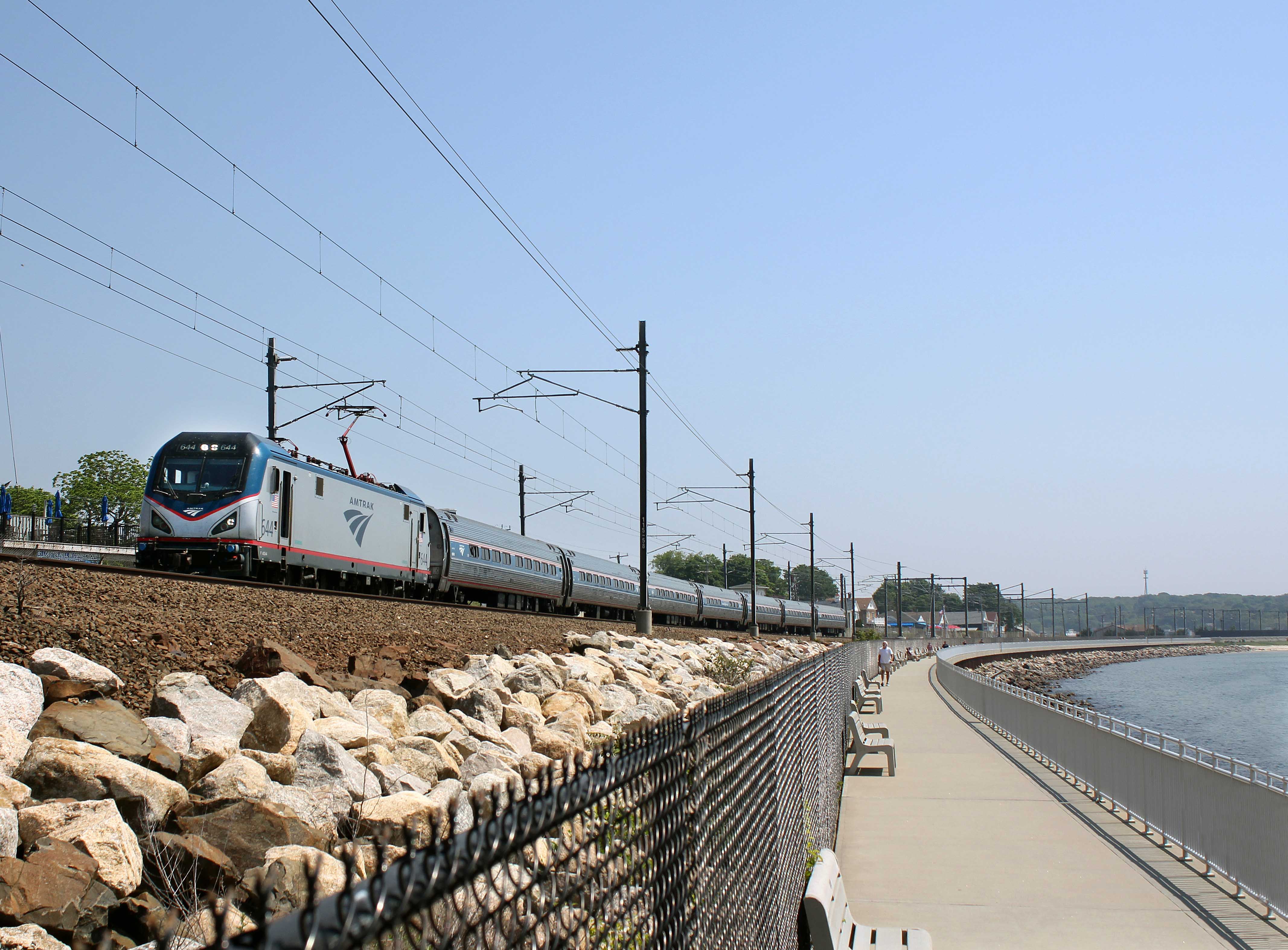 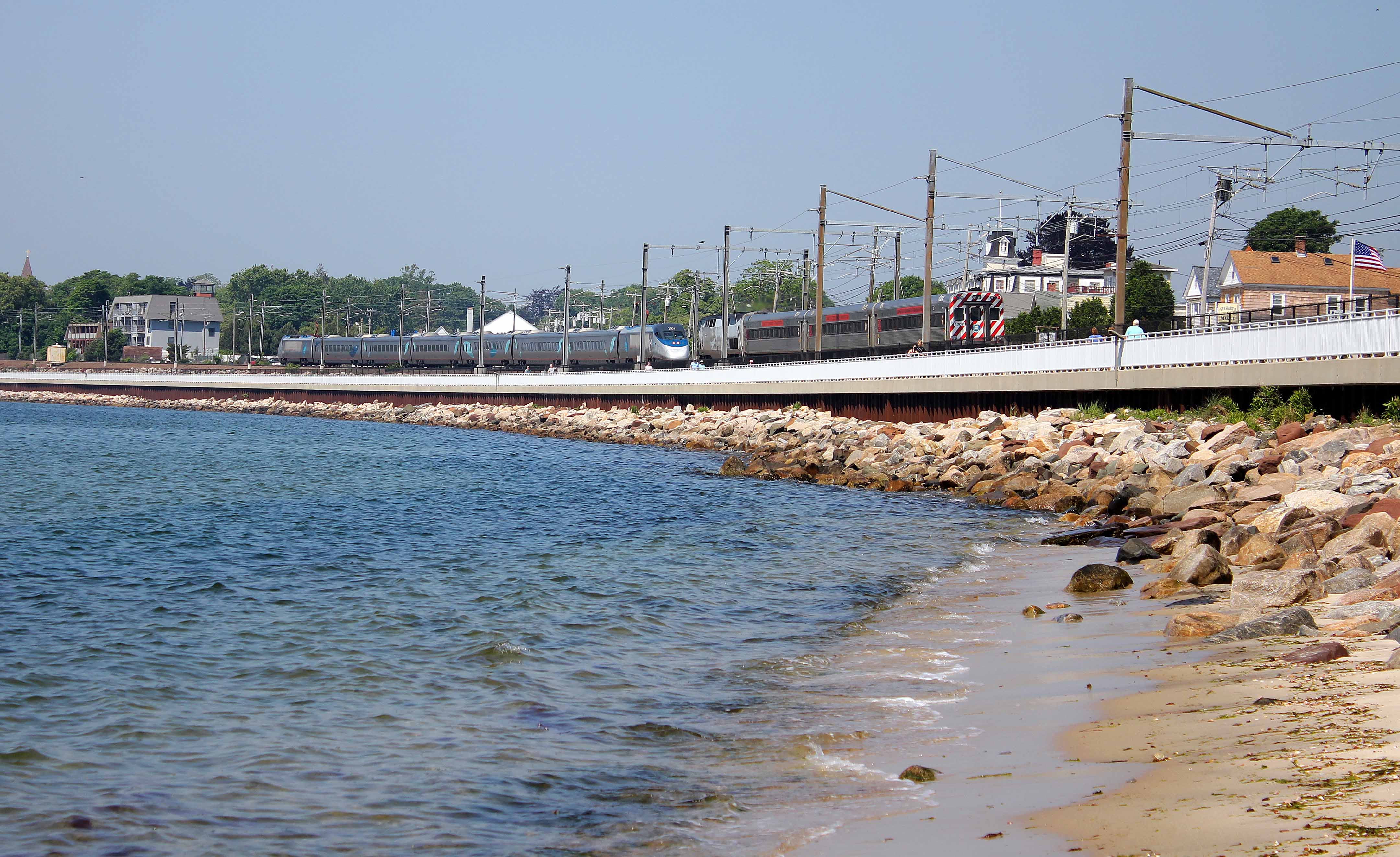 Along with Amtrak trains, the Northeast Corridor through Niantic hosts the commuter trains of Connecticut’s Shore Line East. A Boston-bound Acela meets a New Haven-bound SLE train powered by an ex-Amtrak General Electric P40DC. Since this image was taken in June 2021, SLE has begun the use of Kawasaki M8 EMU equipment. 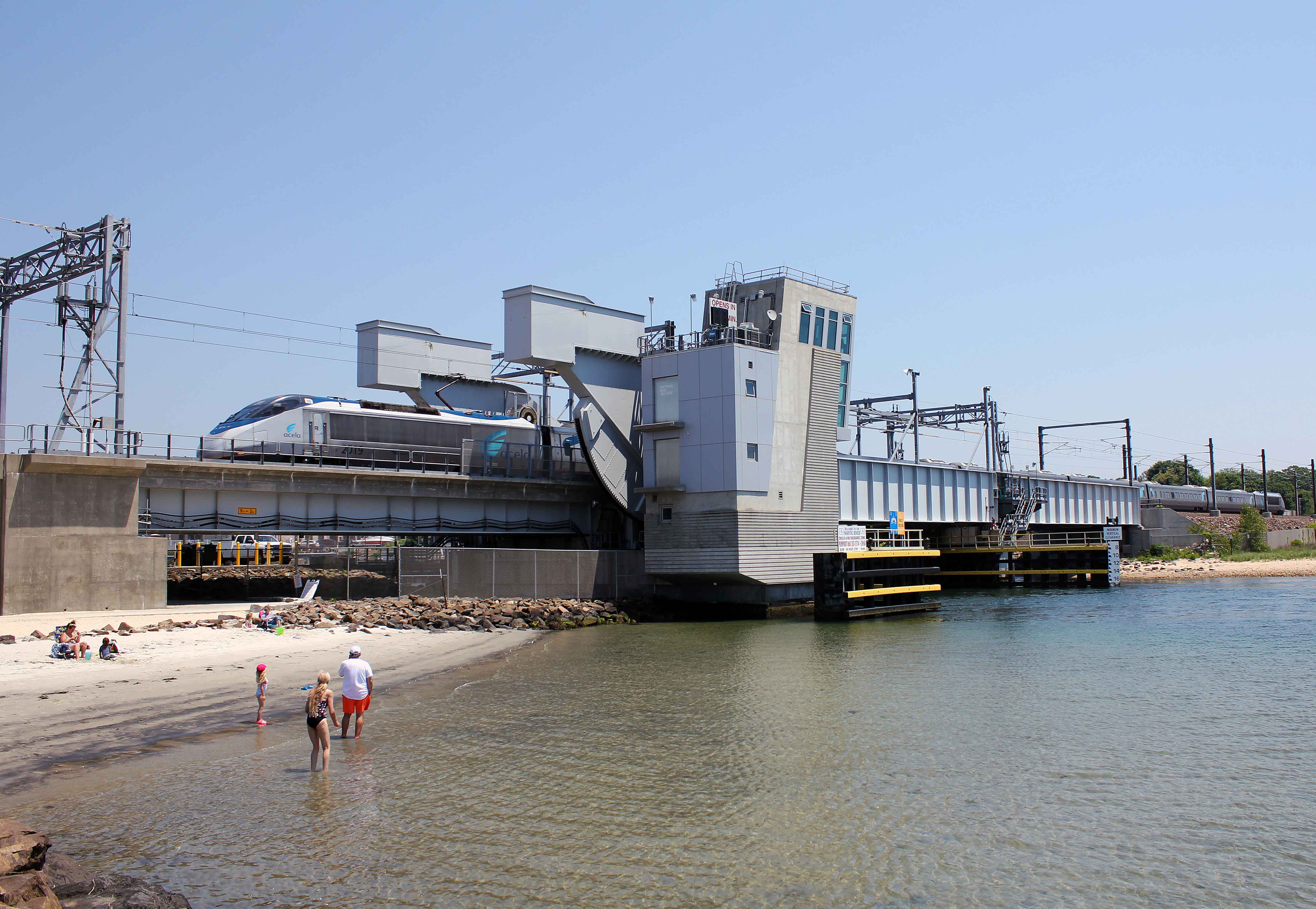 A flashy Boston-bound Amtrak Acela captures the attention of waders as its slings across the Nan moveable bridge atop the Niantic River. Train-watching, strolling the beach and boardwalk, catching some summer sun, and perhaps wading into the calm waves lapping up on the sandy shore – all await at Niantic, Connecticut!