Last year, We Are Railfans stumbled across a hidden, private and totally enchanting collection at The Cab Yard in south Wales, where one enthusiast has amassed locomotive cabs from a variety of diesels and multiple units over a number of decades.

Elusive private railway collections like this are rarely seen by the general public but often exemplify the dedication and passion that many railfans nurture over the course of their lifetimes. This year, we were lucky enough to be guided around another such site in the heart of rural Devon, England, where a short stretch of the otherwise dismantled Teign Valley line remains in situ as the Exeter & Teign Valley Railway. 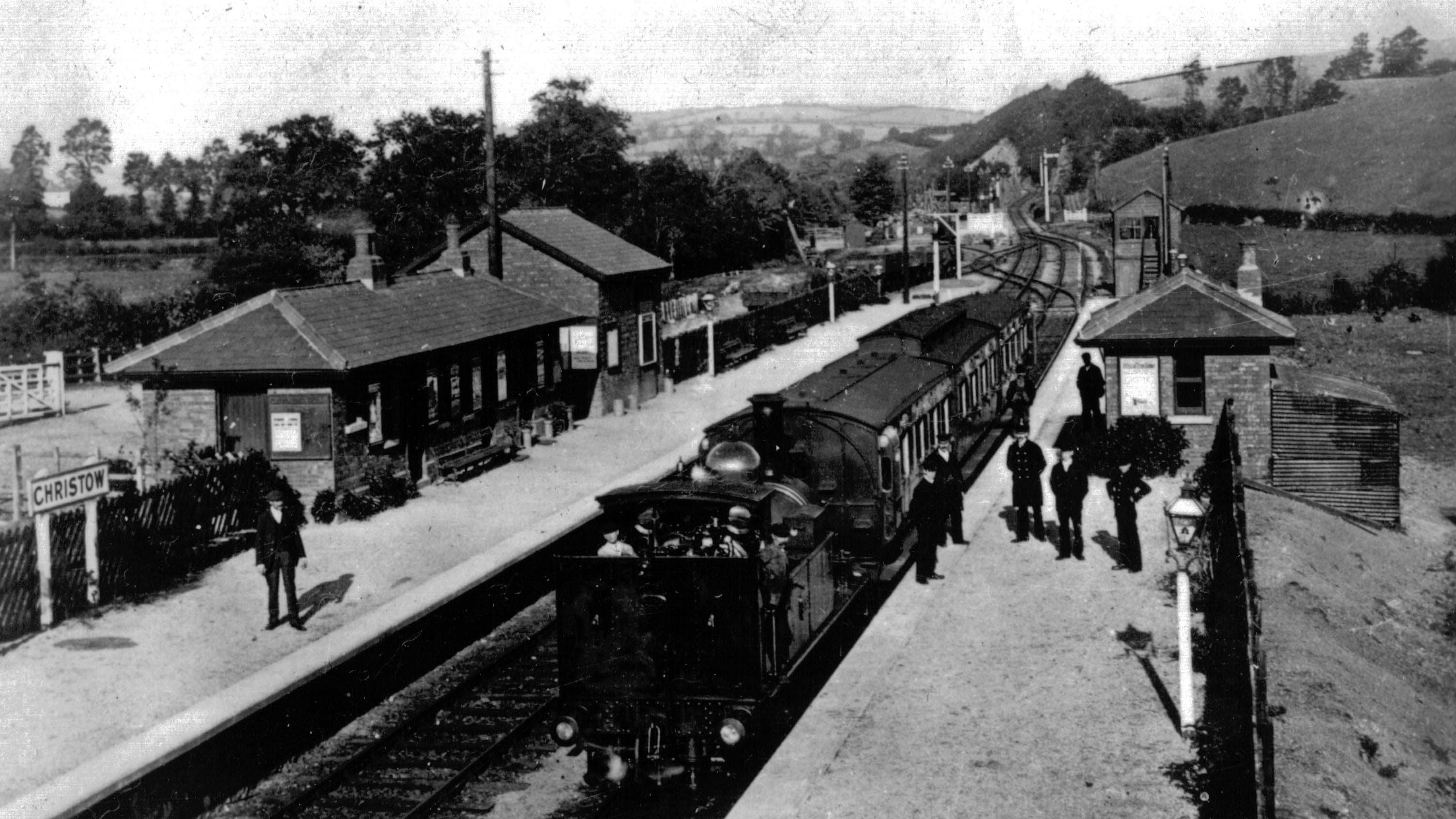 Christow Station c.1904 from a Public Domain image by Roger Griffith. The area now rebuilt as the Exeter & Teign Valley Railway can be seen in the background, beyond the station platforms.

The Teign Valley branchline was built in two stages, opened in 1882 and 1903 respectively and linked Heathfield (between Newton Abbot and Bovey Tracey) with Exeter St Thomas via the village of Christow along the Teign Valley. It was finally closed in 1967 after a history of mineral traffic, passenger services and wartime use largely under GWR.

After an initial 3-year-long attempt to reopen a stretch of the line in 1975, an effort on a sounder footing to reclaim the goods yard at Christow began in 1984 revealing the original crossing point of the line where eventually some track was relaid and rolling stock delivered to recreate a scene representative of the branch line's past. Decades of hard work has resulted in a localised railway haven, with an exhibition displaying the best of both the Teign Valley line's history and the wider railway operations once seen around Exeter and Devon.

The site in 2022, with three standard gauge lines, a reconstructed Cattle Dock and the narrow 2-foot gauge line leading to the small storage wagon (left).

What results today, closed to the general public but opened for guests where appropriate, is the work of Colin who kindly took us round the site, explaining the details of much of the items there over a course of a few hours. Unlike a typical heritage railway, where the grandeur and drama of running locomotives can shroud the finer details of history and context, here a true appreciation can be gained for the finer details of railway operations and the dedication offered by railway workers of all disciplines, including permanent way staff, throughout the entire history of railways in Britain. 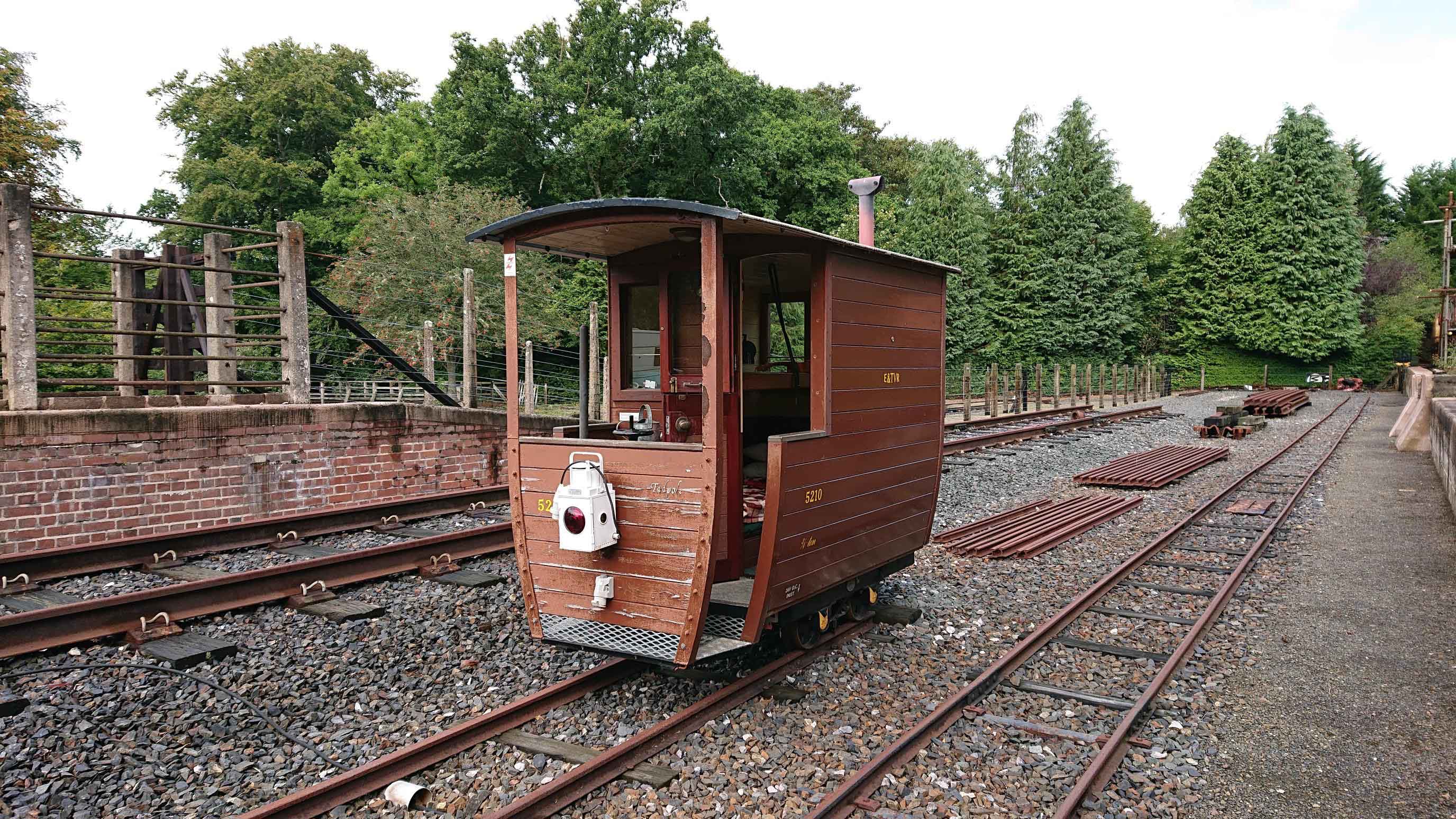 'Tadpole' (above), one of two narrow gauge unpowered 'Manumotive' vehicles. This one contains two small bunk beds. The vehicles are pulled by hand up the gentle incline before being released toward a turntable that accesses a second line around the site's perimeter. A brake is present on each vehicle to limit their speed. The other 'Jasmine' (below) was our saloon of choice during the thrilling ride we were treated to on the day. 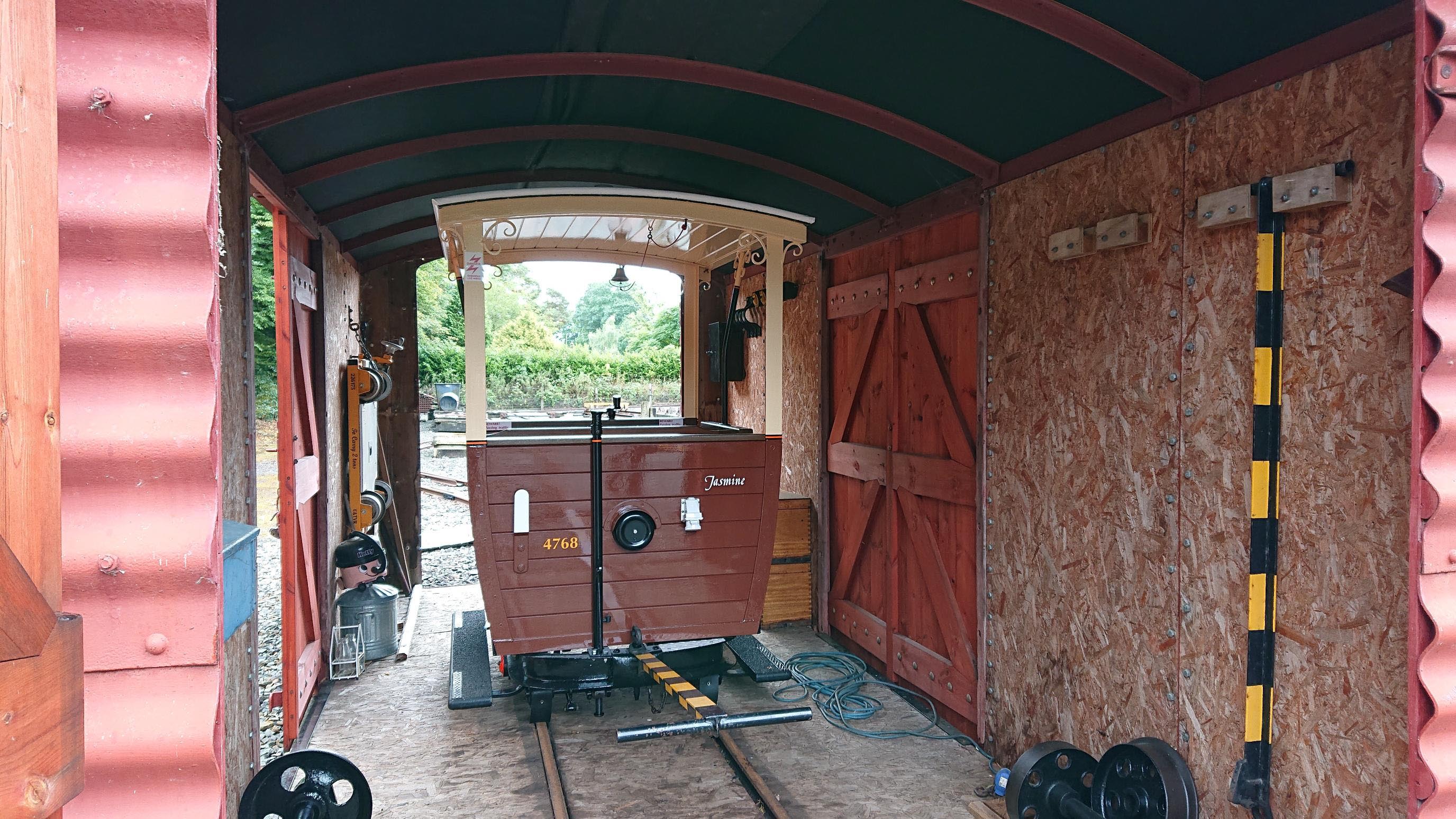 The site currently has in place three short standard gauge lines, with a smaller 2 foot gauge line running through the middle and round the northern perimeter. A small eclectic selection of standard gauge vehicles occupy the tracks, whilst the narrow gauge track, adorned in one area with local side-tipping trucks from Devon clay mines, also features a gravity-run 'ride-on' wagon, which we were delighted to have travelled on during our visit. 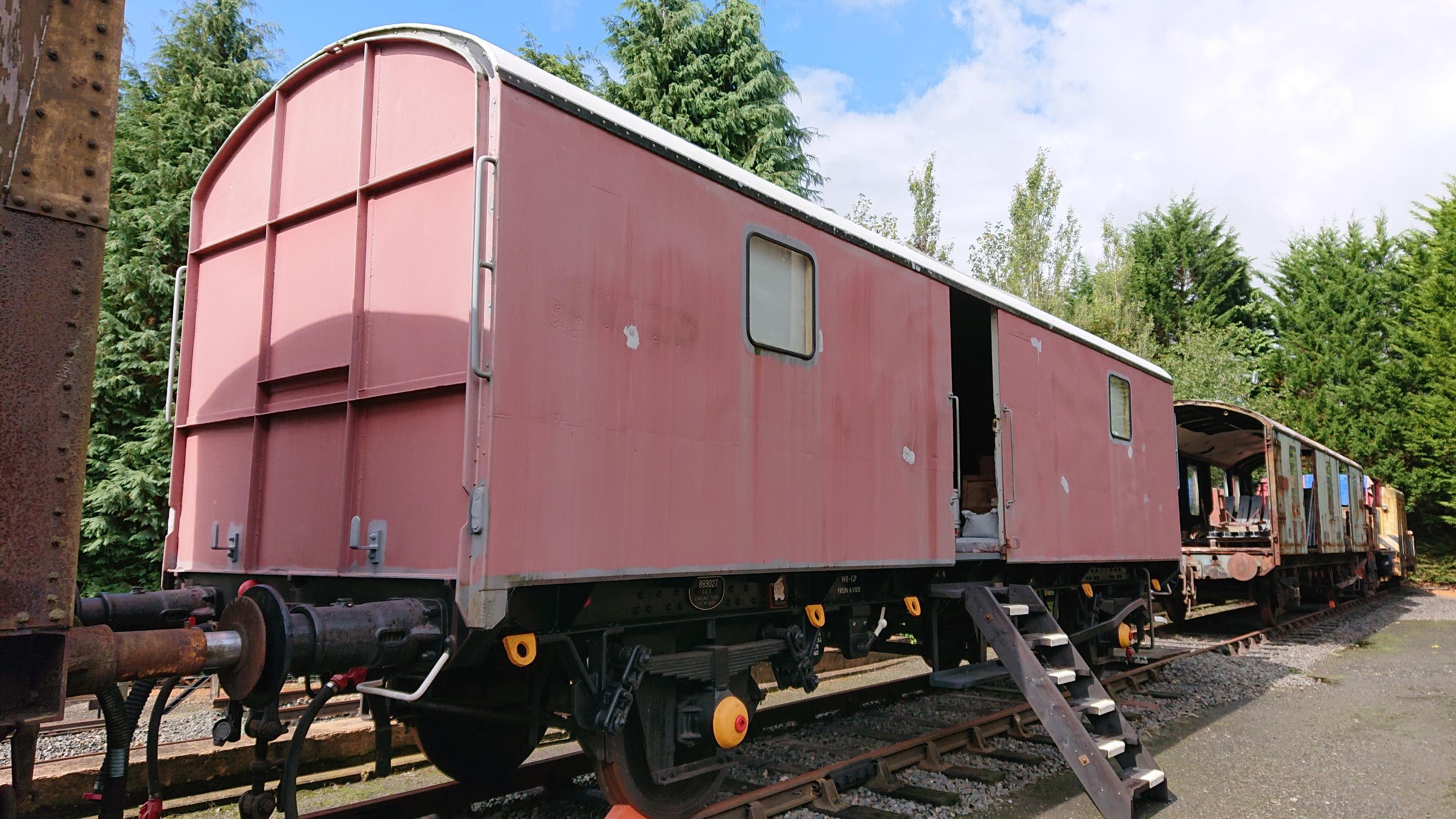 Ferry Van 889027 is one of many works in progress. This vehicle would have seen action in both the UK and on the European continent, capable of transporting road vehicles: "the family Alvis to Tuscany". Some 14 of the 30 examples have survived.

A Wickham Trolley also features as one of Colin's star attractions. Enthusiasm for Wickham Trolleys is one of those brilliant niche areas of railfanning, bringing together passionate owners and occasionally coming to the forefront of gala events where a number can be seen running at once. Their existence as vehicles for permanent way gangs is often looked upon whimsically, but their importance to the maintaining of the nation's railways should never be underestimated. Colin's example, built in 1949 and run more recently in such places as Dunster and Blue Anchor on the West Somerset Railway, is immaculate, cared for and rebuilt to running order with the sort of attention to detail that ensures the future of so many of his railway-related items of interest. 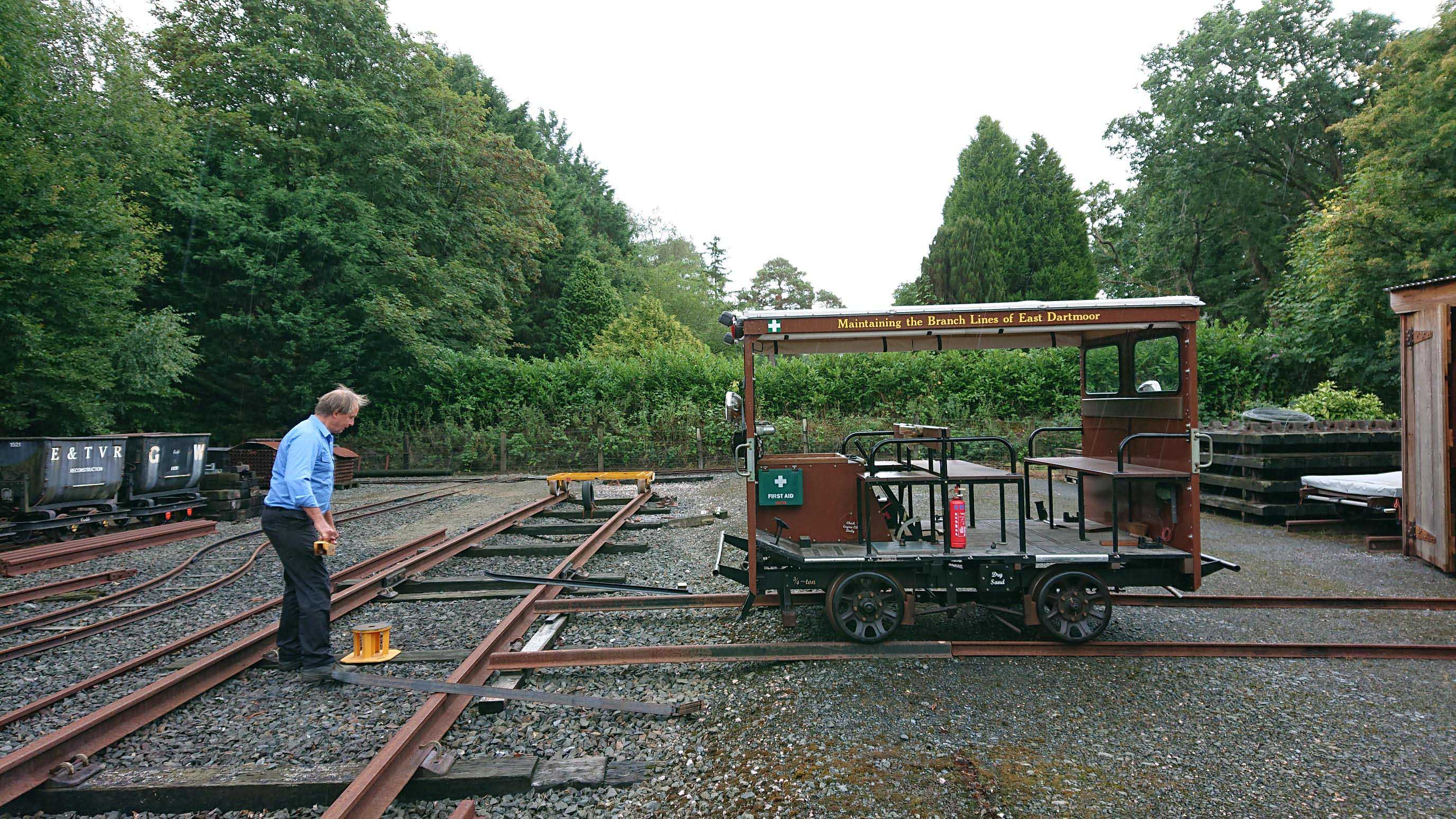 One of the many impressive demonstrations given on the day. P-Way gangs were required to store Wickham Trolleys in basic buildings erected using sleepers and situated perpendicular to the running line. Therefore an ingenius method of turning was required to get the vehicle onto the track, involving balancing arms and small pivot (yellow item in the four-foot). This example of a Type 27 Trolley, 'Gangcar 194', built in 1949, is propelled by a Ford engine. 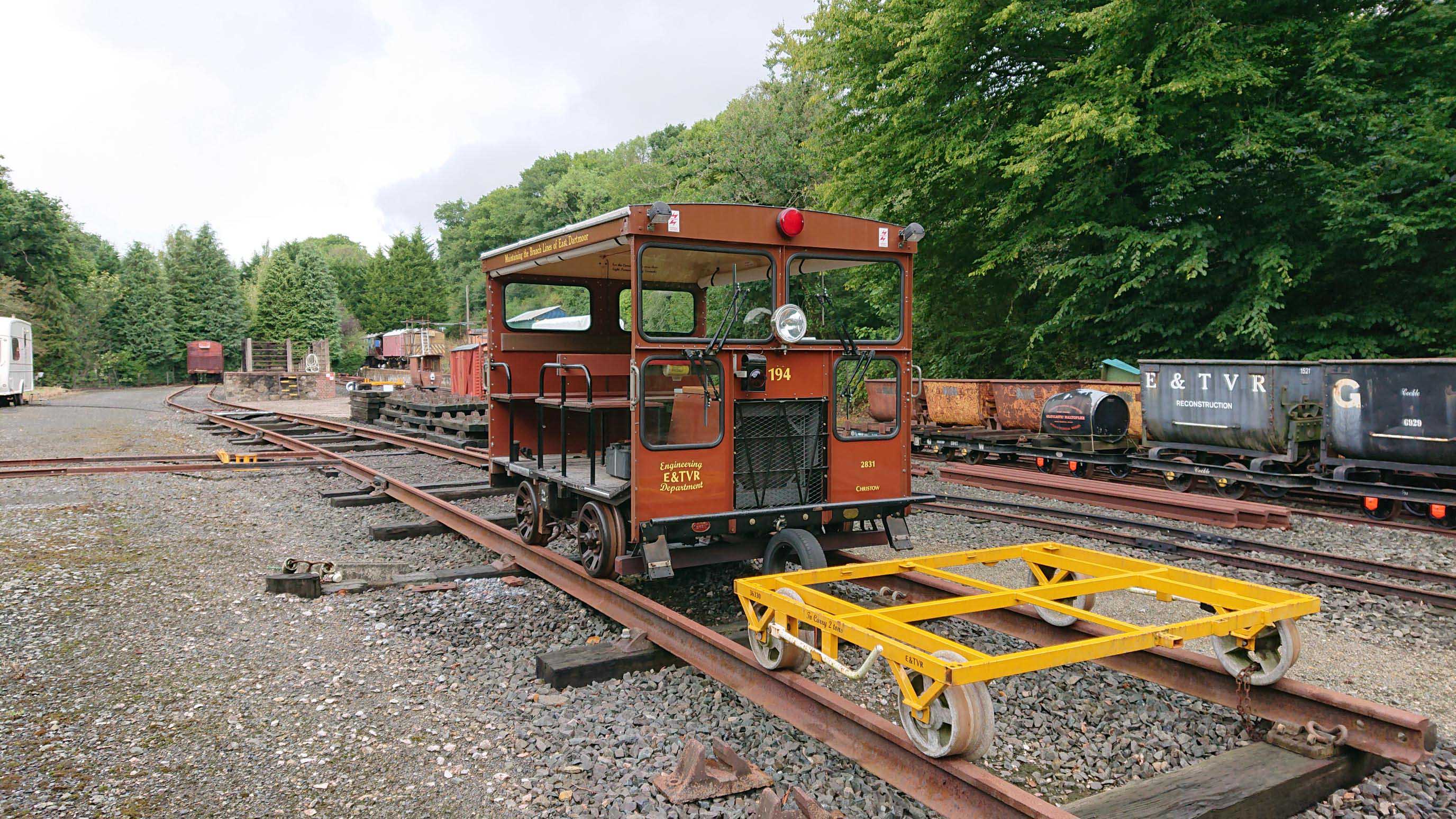 Colin's knowledge and diligence comes across evidently in the way he explains the history of much of the items on site, from that of drop windows and station signage, to the unlikely relevance of the Teign Valley route to the ongoing conversation of diversion around Dawlish after the coastal damage that occurred in 2014. His strong views show a great care and love for the railways, displayed in the insightful and varied musings available to read and hear on his website and YouTube Channel. It is also clear that only those with an aligned interest and appreciation for his privately-owned site are accepted amongst those wishing to view it - and understandably so. Sometimes gems like the site at Christow are best left for the minority to enjoy and our visit there was certainly one we'll remember for many years to come. 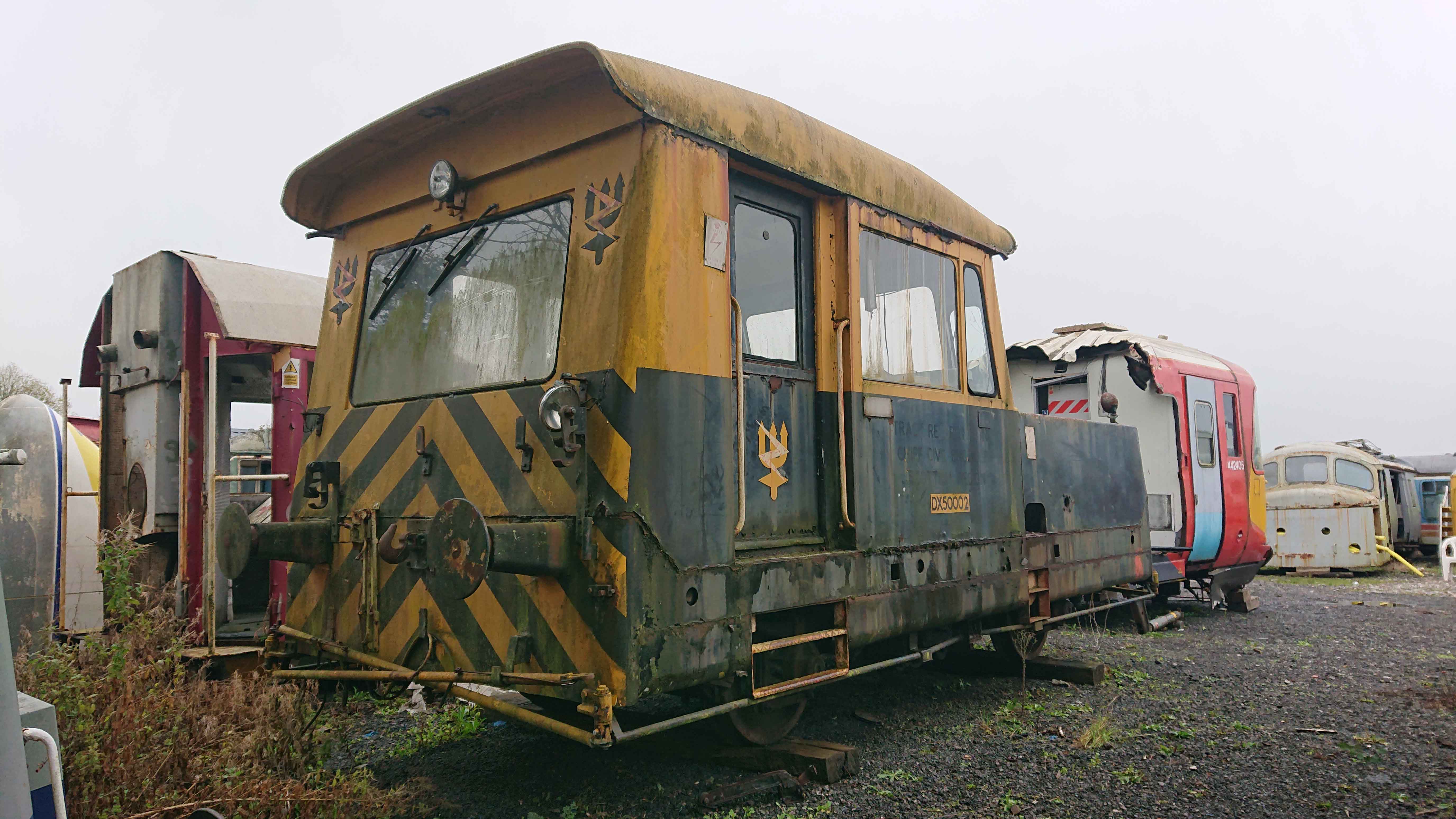 We Are Railfans 'found' Colin's site at Christow partly as a result of this Matisa Neptune Track Recording Trolley. Readers may remember the one we featured at the Cab Yard (above) and its owner informed us that another was located "somewhere in Devon" - which is the one at Christow (below). More information about their operations can be found on the E&TVR website here: Matisa Neptune Track Recording Trolley 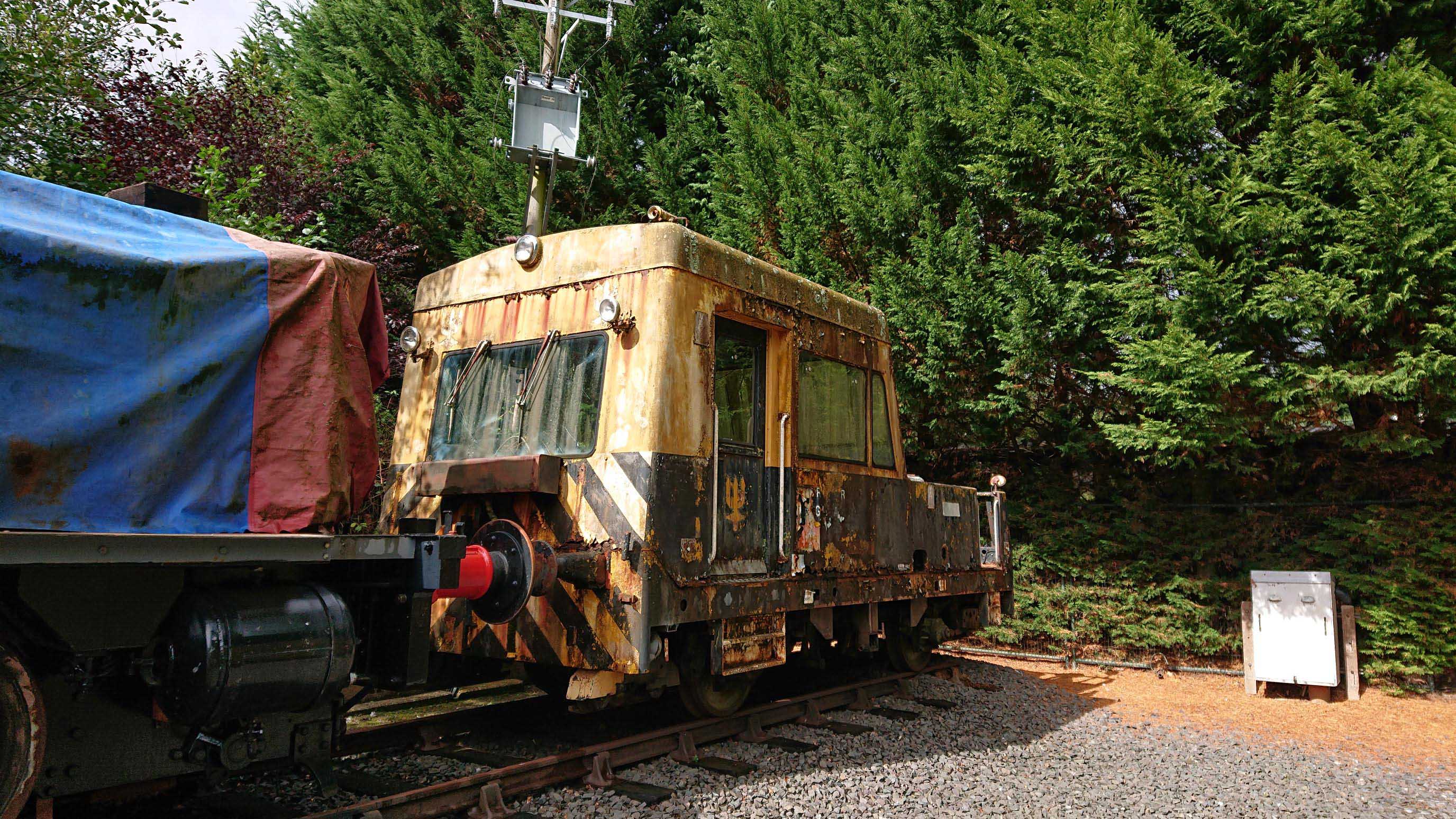 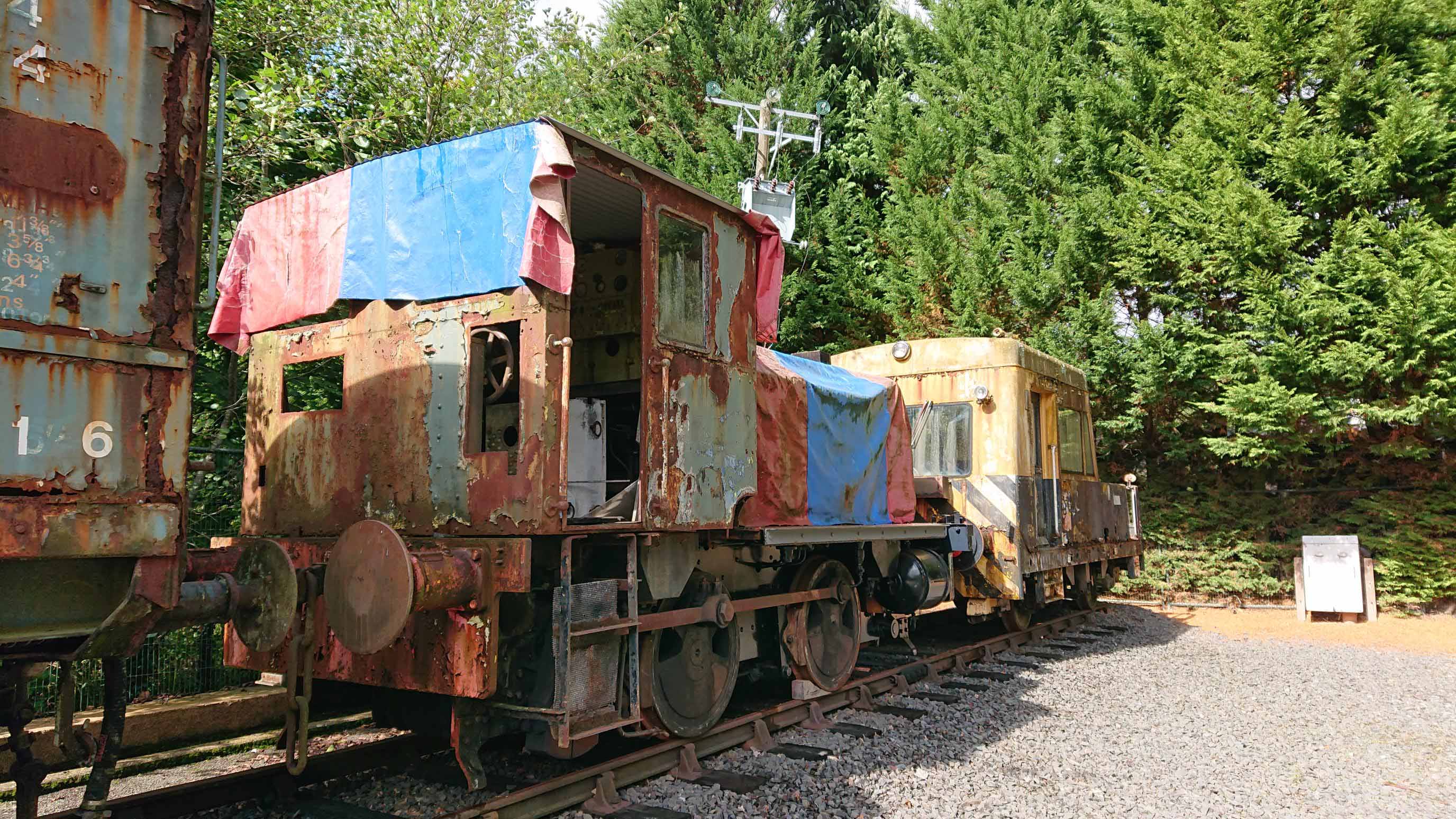 The only other powered railway vehicle on site is D2269, an 0-4-0 Diesel shunting locomotive. It is undergoing gradual repair, with a number of cosmetic elements ready to be fitted once the main body has received some attention.

Despite the exclusive nature of the Exeter & Teign Valley Railway, support for the site is always appreciated by the man who has single-handedly landscaped, rebuilt and presented the pristinely kept exhibition for those fortunate enough to enjoy it. Exeter & Teign Valley Railway items are available along with genuine railwayana from the likes of GWR, LNER and British Rail. You can view these items here: E&TVR Gift Shop

We Are Railfans would like to thank Colin for taking the time to show us round. More information on the Exeter & Teign Valley Railway can be found on the website: https://www.teignrail.co.uk/index.php

The railway is occasionally opened to the public during the summer and can be opened specially by arrangement on other days for parties of adults or escorted children. Admission to The Temporary Booking Office, which houses an exhibition, is by souvenir platform ticket costing £2. There are no fixed opening times. Anyone planning a visit may telephone or wire the railway beforehand to check.