Words and Photographs by Gary Dolzall.

On May 1, 1971, the National Railroad Passenger Corporation – commonly known as Amtrak – took over the vast majority of intercity passenger operations in the United States. The 1960s, in particular, had been unkind to the fortunes of passenger service in the U.S., and in assuming the task from the private rail carriers, Amtrak had no choice but to gather together the best available locomotives and passenger equipment that remained among those railroads’ often tired fleets.

In diesel locomotive terms, that translated primarily to Amtrak acquiring a sizable roster of secondhand Electro-Motive E8 and E9 diesels, the youngest of which were a decade old. The veteran E-units could only be considered a stop-gap solution, and in short order, Amtrak contracted with Electro-Motive for a new model – to be designated SDP40F – that was envisioned to serve as standard power for Amtrak’s intercity trains outside the electrified Northeast Corridor. Amtrak ordered 150 SDP40s.

The passenger-service SDP40F would utilize many of the same components and design elements found on EMD’s SD40-2, a freight unit that debuted in 1972 and that would go on to become one of the most successful freight locomotives in history. Like the SD40-2, the new passenger diesel would be rated at 3,000 horsepower derived from an EMD 645-series, turbocharged, two-cycle V-16 powerplant and would ride a six-axle, C-C wheel arrangement (although for weight reasons, the SDP40F would use a modified “hollow bolster” truck design as compared to that of the freight diesel). There were other key differences, the most visual of which was the SDP40F’s streamlined “cowl” carbody styling (as opposed to the SD40-2’s “hood” road-switcher design). Indeed, outwardly, the new SDP40F would bear a strong resemblance to the EMD FP45s and F45s that had been constructed between 1967 and 1971 for Santa Fe, Milwaukee Road, Great Northern, and Burlington Northern. To provide steam-heat for the trains it would haul, the SDP40F was equipped with a pair of steam generators and a 1,350-gallon internal water tank to feed those generators. All told, especially for a passenger locomotive, the resulting SDP40F was a heavyweight, tipping the scales at just under 400,000 pounds.

Amtrak’s order of 150 units (Amtrak 500-649) rolled out of EMD’s LaGrange (Illinois) plant between June 1973 and August 1974, and took the helm of Amtrak trains across the U.S. The big diesels, delivered in Amtrak’s original “bloody nose” livery, were impressive to see and hear and brought reliability to the power pool – but trouble awaited. Over the next several years, the SDP40F was involved in a number of derailments at speed, occurring on multiple railroads including the Chessie System, Louisville & Nashville, and Burlington Northern. Typically, the derailments occurred on curves of 2 degrees or greater and involved a trailing SDP40F and/or the first baggage car of the train lifting off the rails. The exact cause remained elusive, with theories ranging from excessive yawing on sometimes less than pristine trackage to sloshing of the enormous water weight in the internal tank of the unit, to a hidden design defect in the hollow bolster truck. With the cause uncertain, some of the freight railroads over which the units operated began to ban them, and the Federal Railway Administration (FRA) imposed a national 40-mph speed restriction on the units when operating through 2-degree or greater curves. The results were chaos for Amtrak, which scurried to find leased replacements for the SDP40Fs on the railroads that for a time banned them as long-distance trains ran hours late due to the speed restrictions.

It was all too much for Amtrak. The derailment problems with the SDP40Fs, combined with the fact that they would in any case soon need to be converted from steam heat to electrical head-end power (HEP) as Amtrak’s new generation of rolling stock arrived, resulted in the decision to phase out and replace the young SDP40F fleet. And ready to take their place was a more nimble diesel – the four-axle EMD F40PH – that would eventually prove every bit as successful as the SDP40F was troubled. Although the F40PH had originally been envisioned as the little “short haul” sister to the big SDP40F, it would, in fact, become Amtrak’s standard-bearer. In 1977, SDP40Fs – barely four years old – began heading back to EMD, where components – including 645-series powerplants, alternators, and traction motors – would be stripped out and used in new F40PHs. By 1981, less than a decade after the first units had been delivered, the short era of the SDP40F in passenger service was over, although a few remained in Amtrak service into the mid-1980s relegated to work train service and the like.

To this day, the cause of the SDP40F’s tracking difficulties remains controversial, although it is widely believed that a witch’s brew of factors – lateral forces from water sloshing in the unit’s tanks setting up a rhythmic dance; slack interaction of the heavy units with light baggage cars behind; and perhaps less than perfect trackage on curves – culminated in the derailments. Defenders of the SDP40F often point out that on several railroads of the era with reputations for highly maintained track, such as the Santa Fe and Seaboard Coast Line, the SDP40F never suffered a derailment despite extensive high-speed service on trains such as the Southwest Chief and Florida “Silver” trains.

The story of the SDP40F is not a happy one, but there are two addendums with better endings. In 1974, Chicago’s North West Suburban Mass Transit District purchased 15 F40Cs – which were essentially SDP40Fs with HEP rather than steam generators – to power commuter trains on the Milwaukee Road’s routes north and west from Chicago Union Station. Without serious incident, the F40C would serve NWSMTD and successor Metra for more than 30 years.

And while the vast majority of the Amtrak SDP40Fs were returned to EMD for “remanufacturing” into F40PHs (EMD did retain a pair as testbed units), Amtrak swapped 18 of the big diesels to the Santa Fe in trade for 25 veteran Santa Fe road-switchers and switchers that Amtrak would use in terminal and work train service. Overhauled and rebuilt for freight service (including removing the steam generators and replacing the hollow bolster trucks), the ex-Amtrak SDP40Fs were reclassified by Santa Fe as SDF40-2s, given AT&SF road numbers 5250-5267, and painted in Santa Fe’s classic “yellow bonnet” freight livery. Saved from the scrapper’s torch, the last of these lucky 18 diesels would carry on, providing able service to the Santa Fe and its successor, BNSF, until finally retired in 2002. Today, one of the Santa Fe-rebuilt SDP40s remains extant in operational condition and is in the care of Dynamic Rail Preservation, a 501(c)(3) non-profit charitable organization. – Gary Dolzall 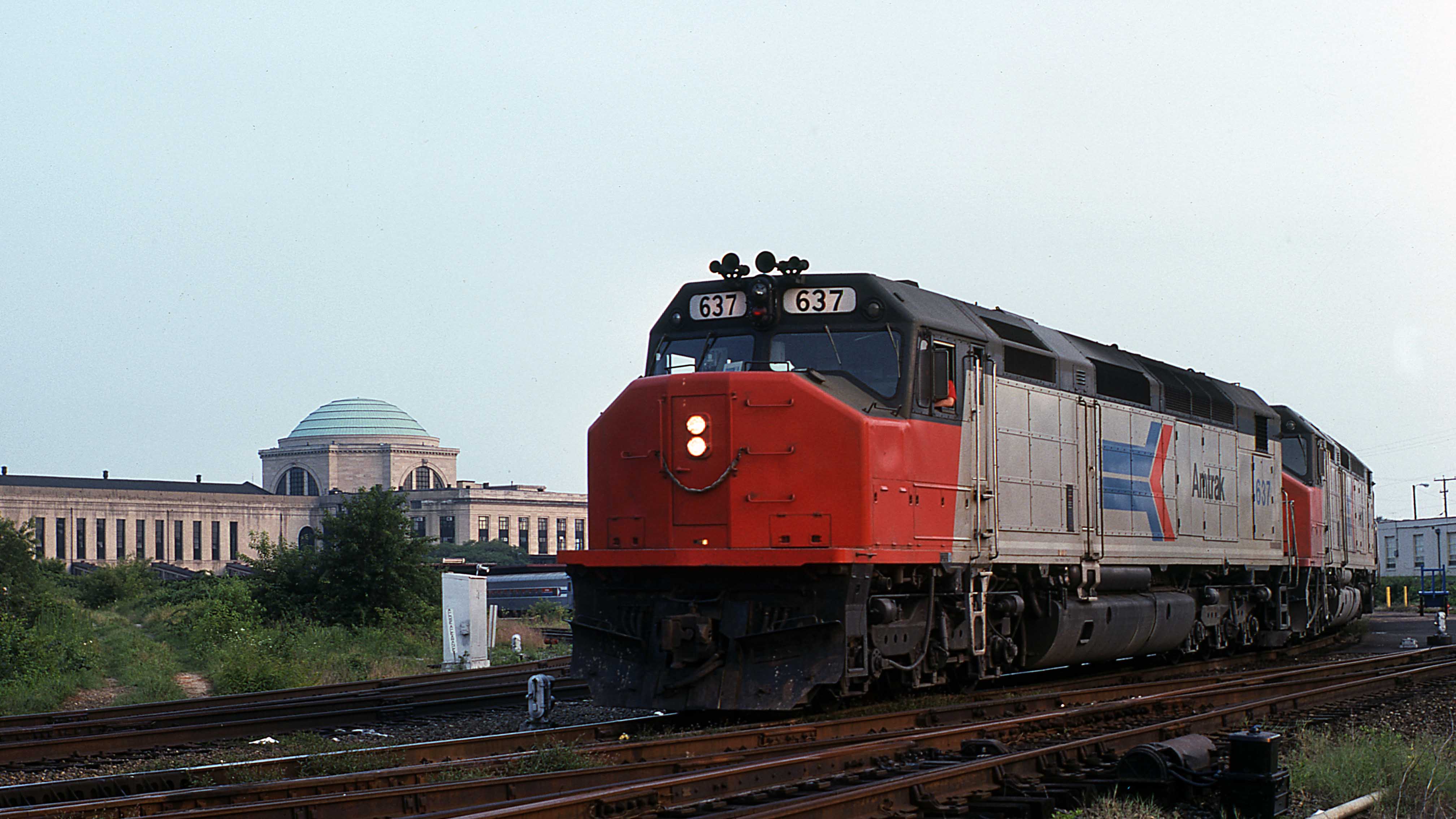 Barely a year into what would turn into an all-too-short career, Amtrak SDP40F 637 and a sister await departure from Richmond, Virginia, with the Silver Star on its southbound journey to Florida in July 1975. In the background is the magnificent dome of Richmond’s Broad Street Station which Amtrak vacated later that year. 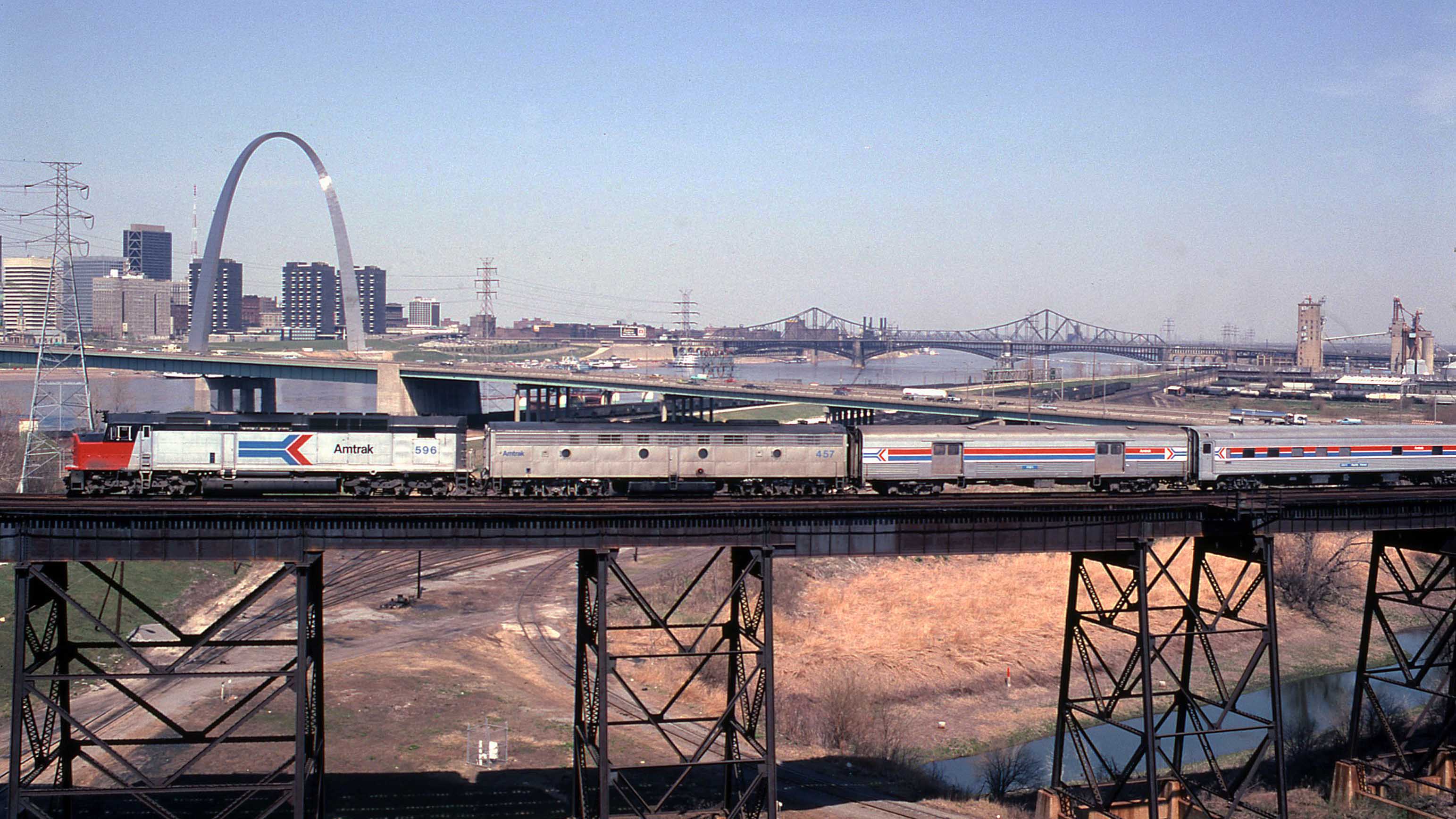 Riding high to cross the Mississippi River and with the famed St Louis (Missouri) arch in the background, Amtrak SDP40F 596 teams up with a veteran Amtrak EMD E-unit booster as it powers the New York-Kansas City National Limited in April 1976. 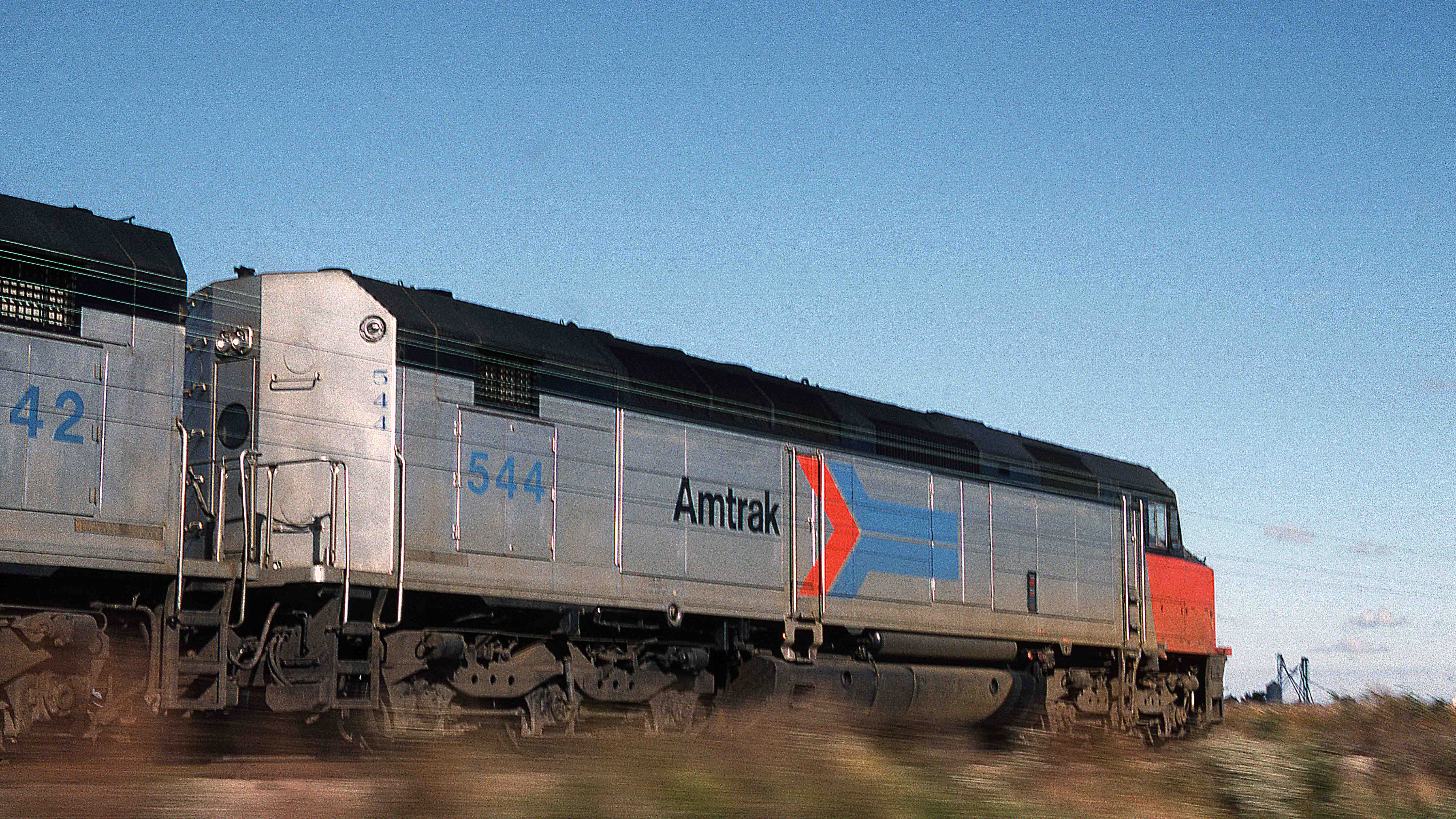 At speed: Captured from a pacing automobile, Amtrak SDP40Fs 544 and 542 are hustling the northbound Floridian along Louisville & Nashville (ex-Monon) trackage through northern Indiana, rolling at 70-plus mph in October 1975. 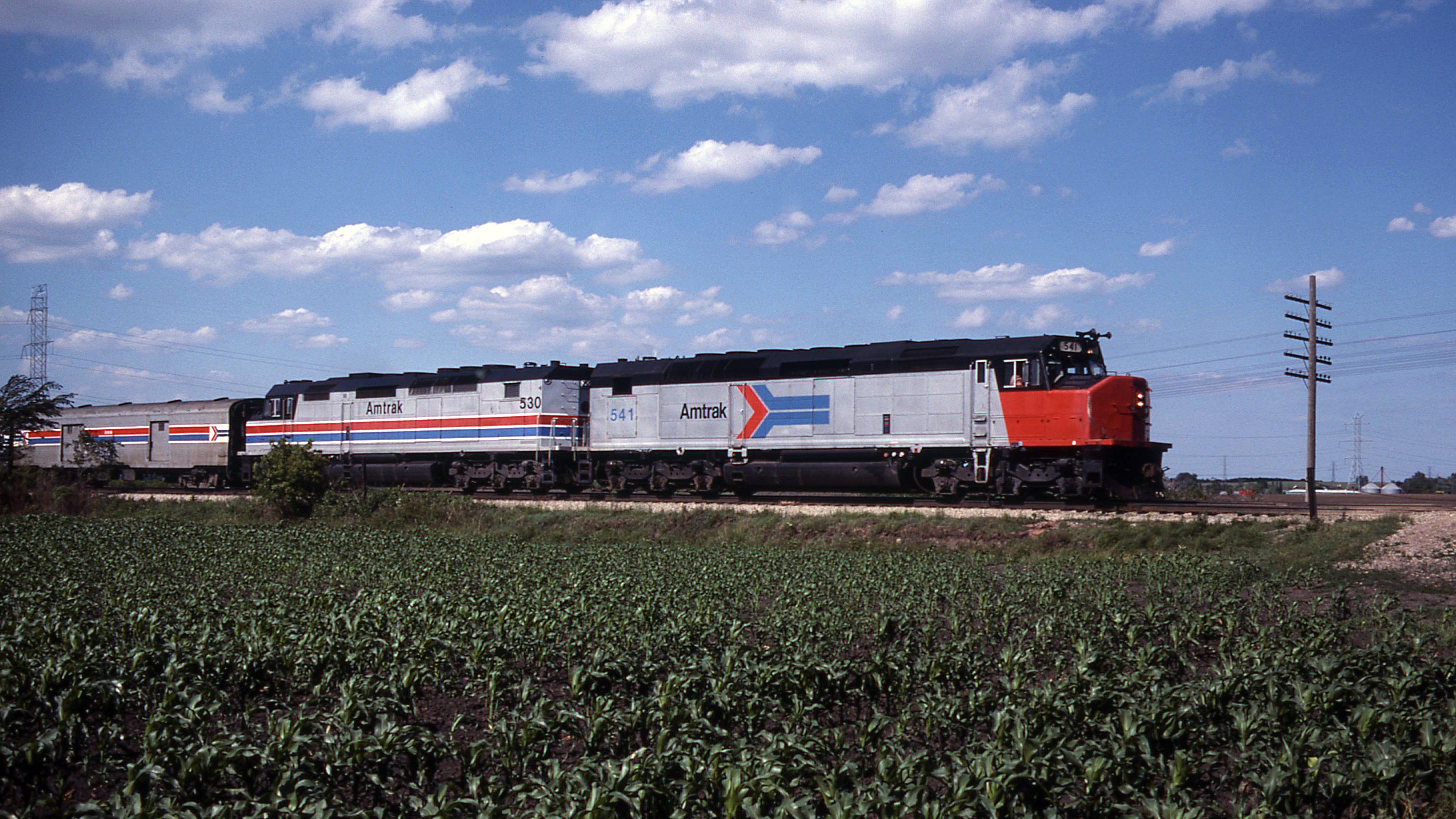 Along the Milwaukee Road in southern Wisconsin, SDP40Fs 541 and 530 wear Amtrak “bloody nose” and “Phase II” liveries as they hustle a pre-Superliner Empire Builder through open country on the final leg of its journey toward Chicago Union Station. 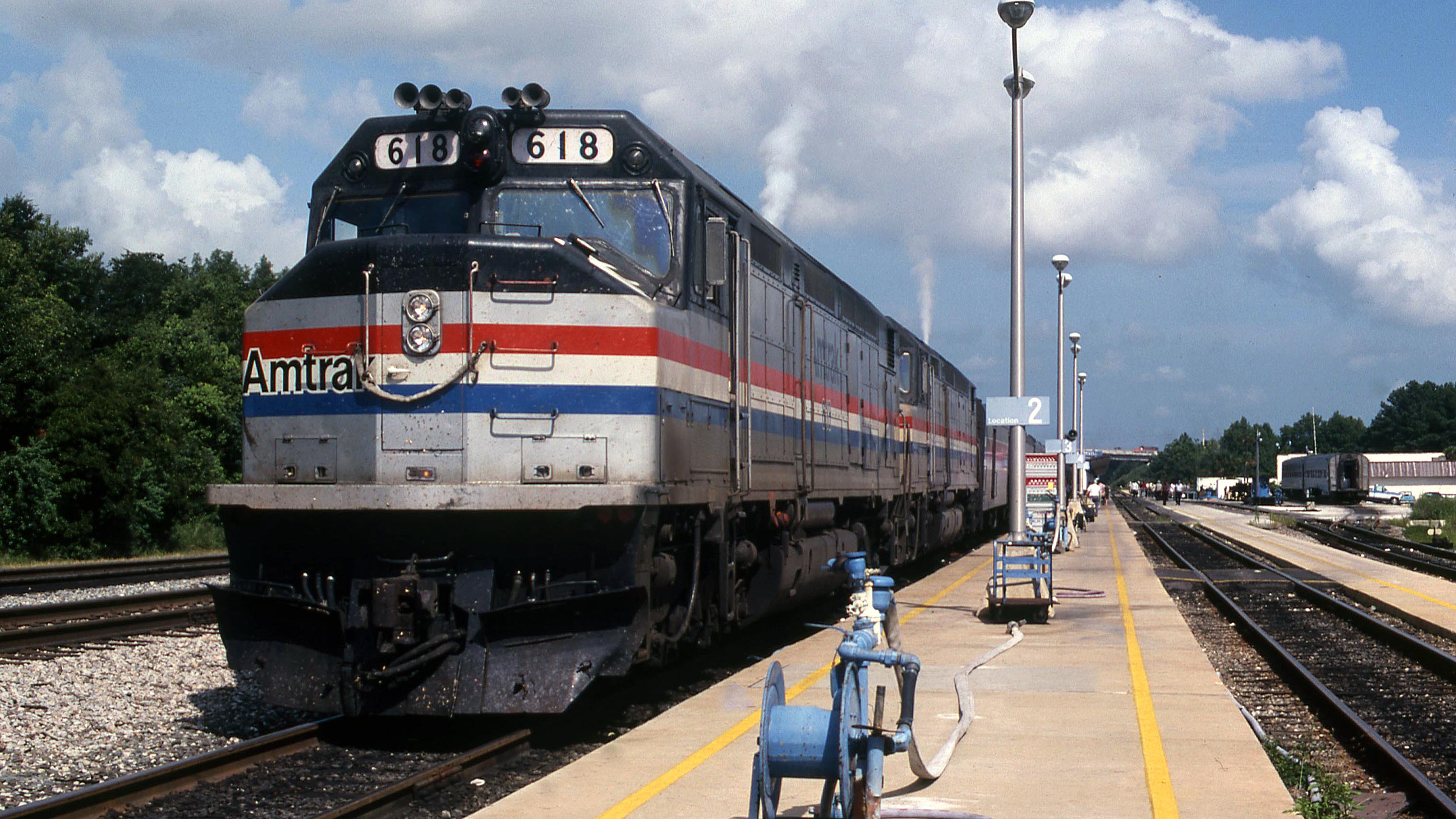 The steam generators of Amtrak SDP40F 618 and a sister are blowing off excess steam as the duo make a station stop at Jacksonville, Florida, with the southbound Silver Meteor in 1980. Along with serious tracking issues, the need to replace the SDP40Fs’ steam generators with HEP equipment was one factor in Amtrak’s decision to retire the burly diesels. 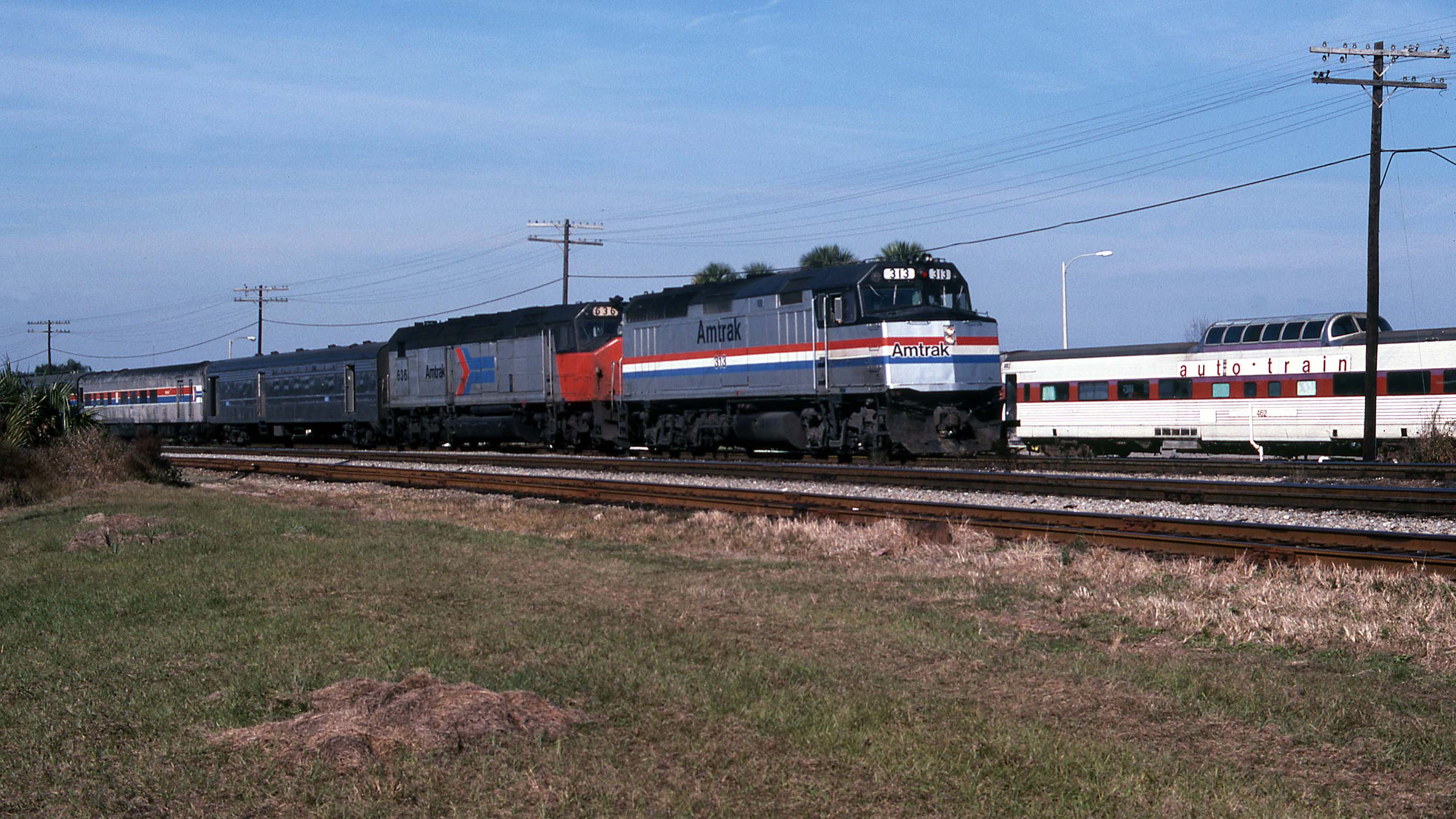 The conqueror and the vanquished: For a brief period, Amtrak EMD SDP40Fs and their successor F40PHs could be found working in tandem. In December 1979, F40PH 313 and SDP40F 636 are powering the St. Petersburg section of the Silver Meteor at Sanford, Florida. The dome car to the right belongs to the pre-Amtrak Auto-Train. 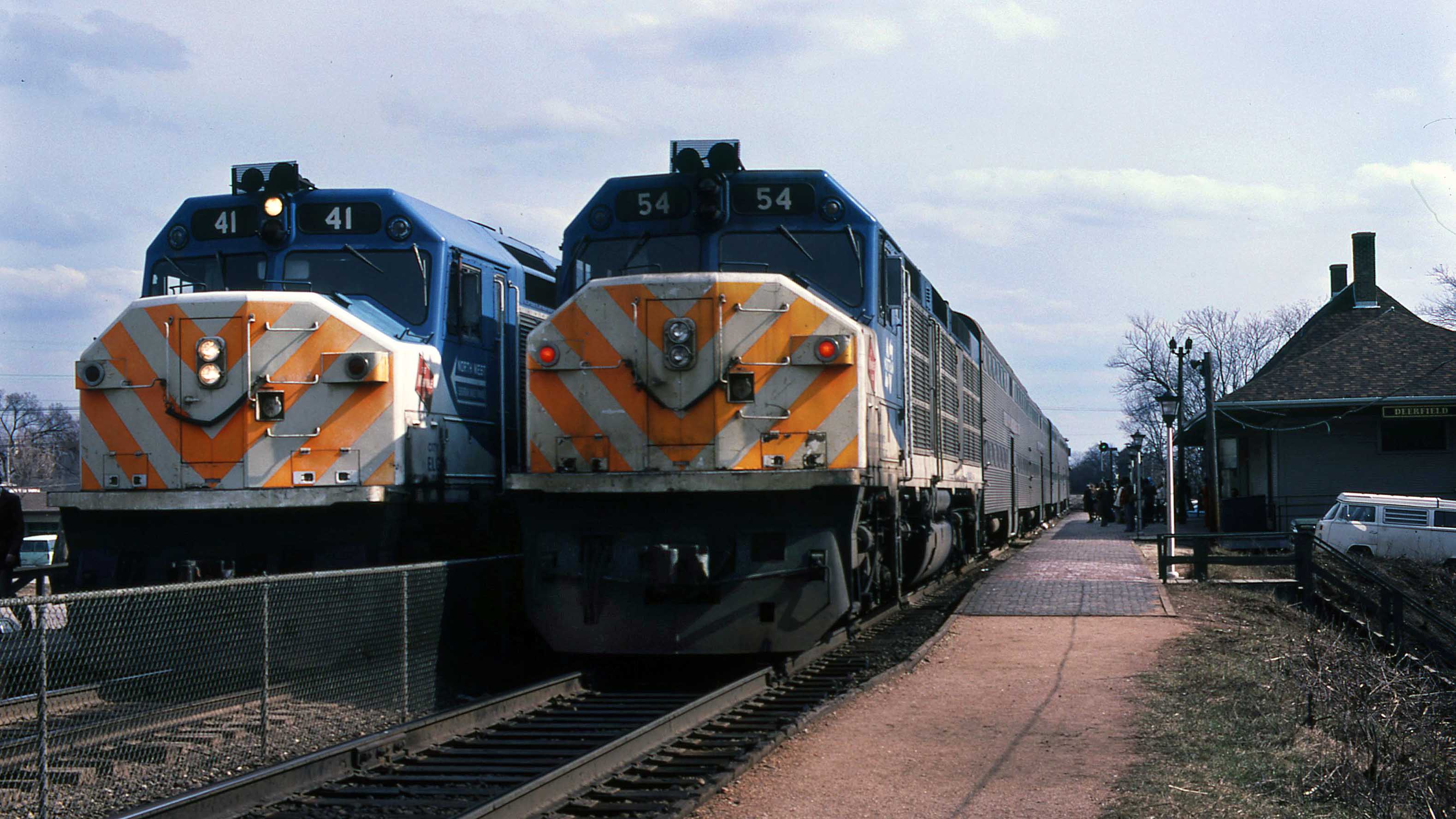 Successful siblings: similar to the SDP40Fs were the HEP-equipped Electro-Motive F40Cs that served Chicago’s North West Suburban Mass Transit District and successor Metra for more than three decades. F40Cs Nos. 54 and 41 meet with inbound and outbound commuter trains at Deerfield, Illinois, on the North Line in April 1979. 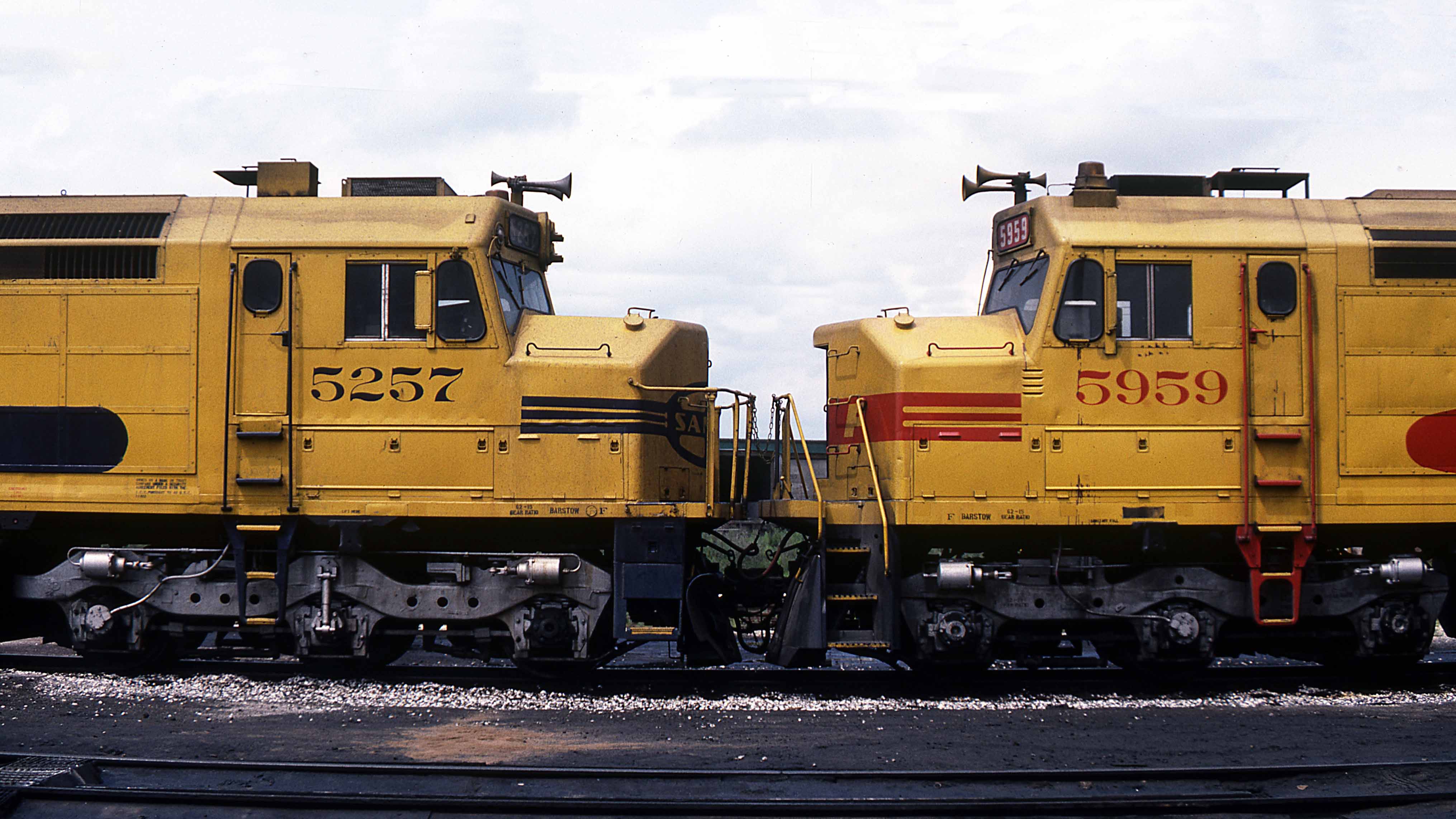 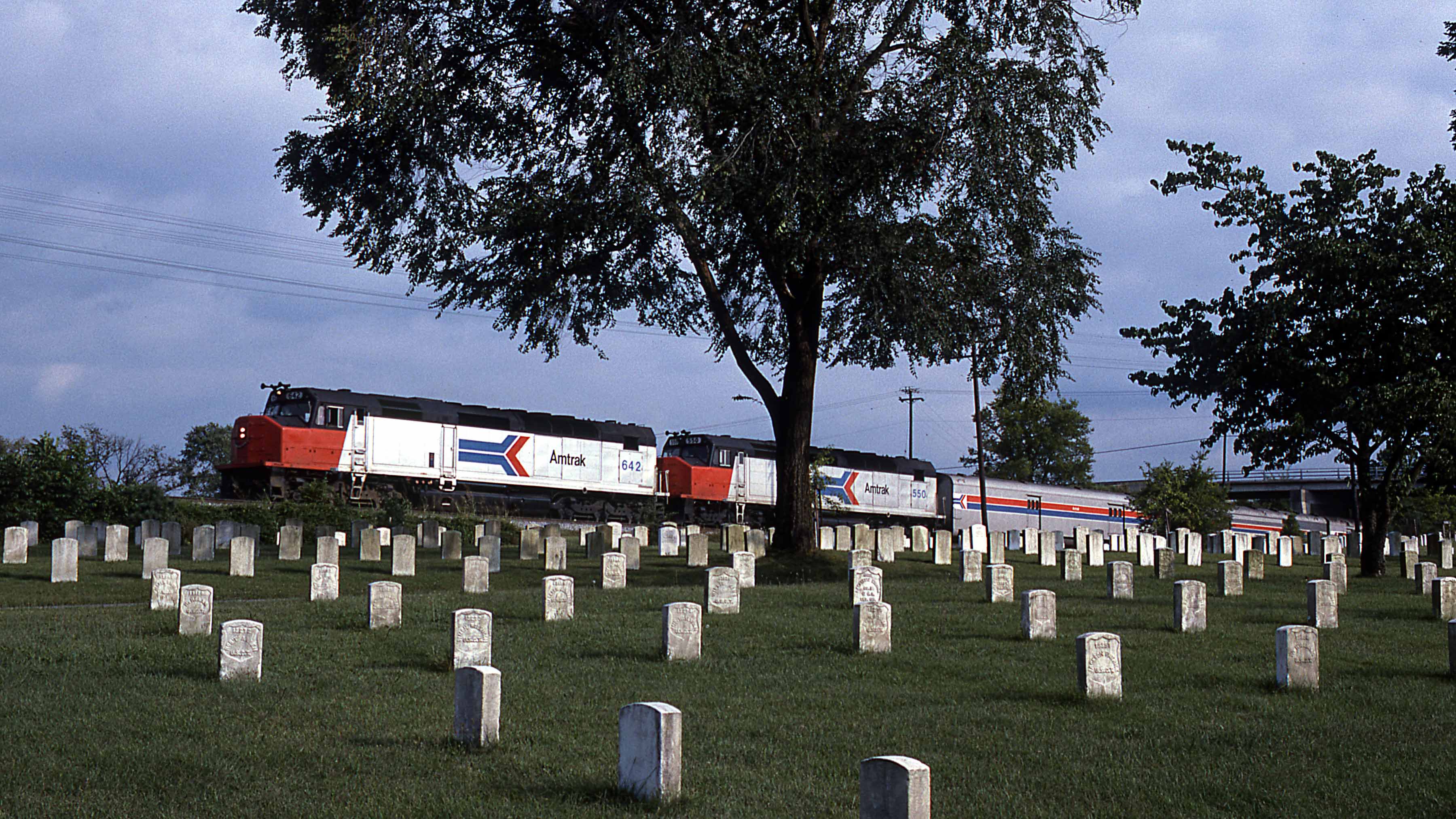 There is, alas, considerable symbolism in this image of a pair of Amtrak SDP40Fs – with the northbound Floridian in tow – rolling through the Civil War-era National Cemetery at Nashville, Tennessee, in 1976. The big SDP40F was, alas, ill-fated and short-lived. 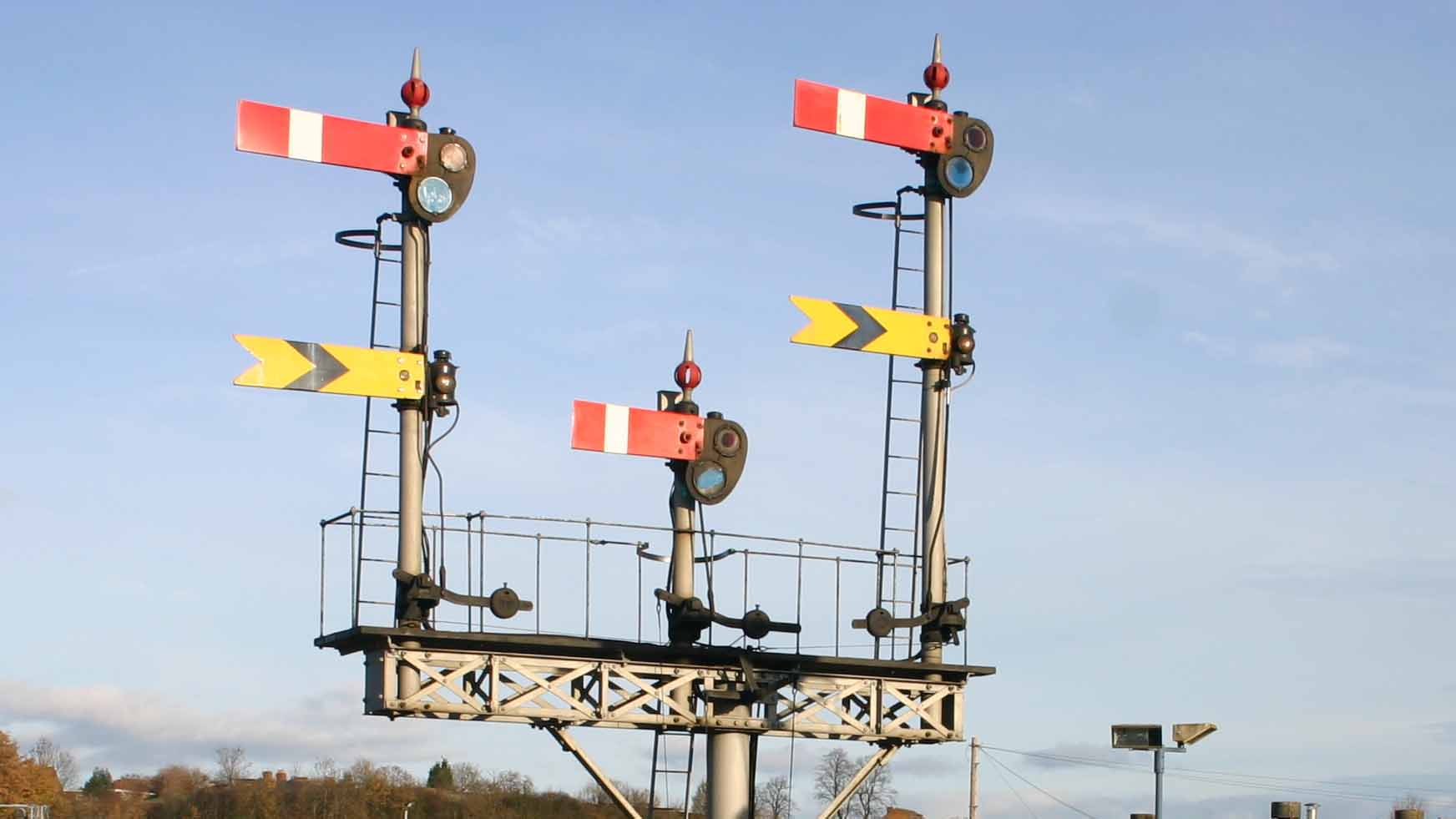 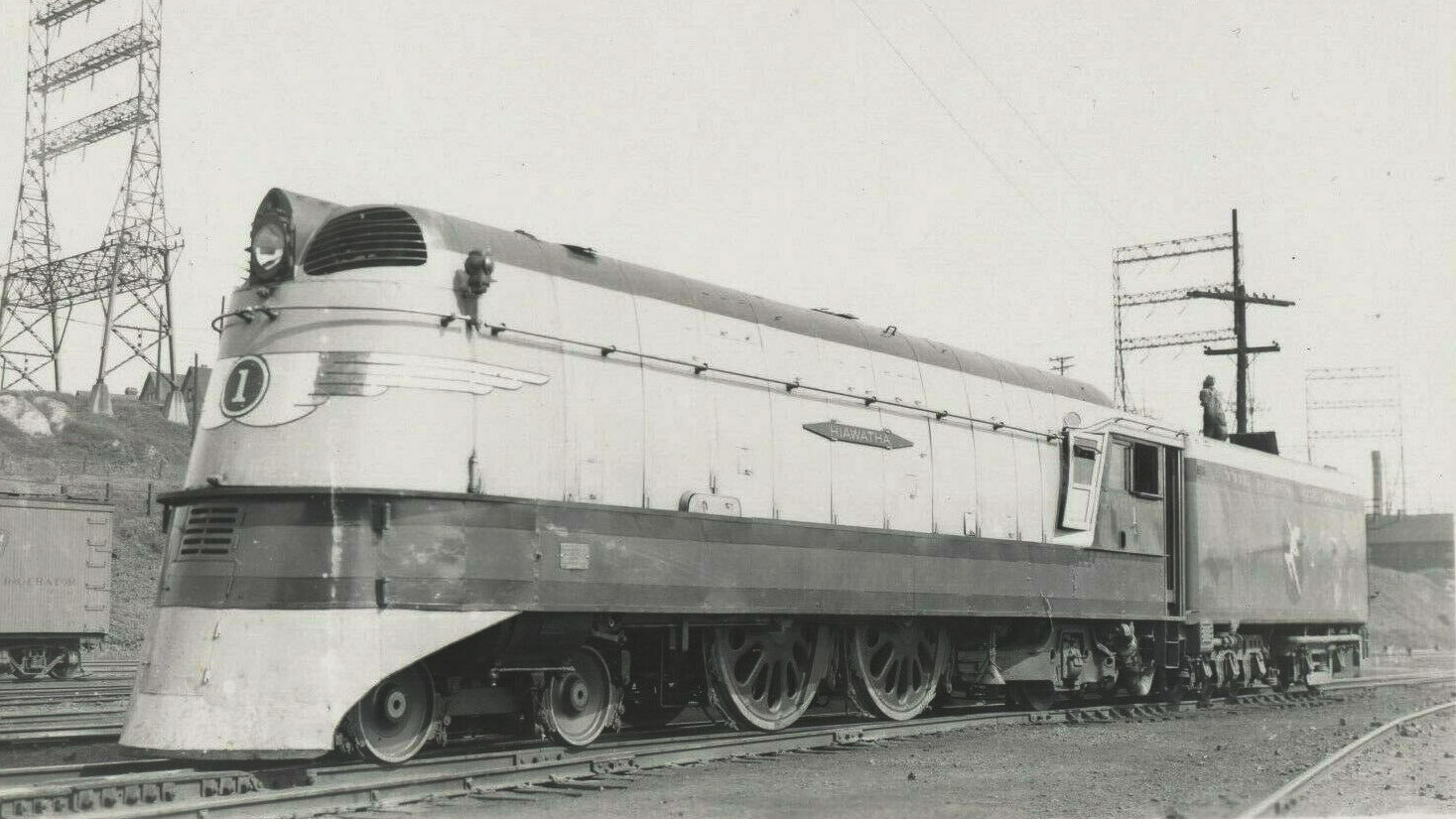 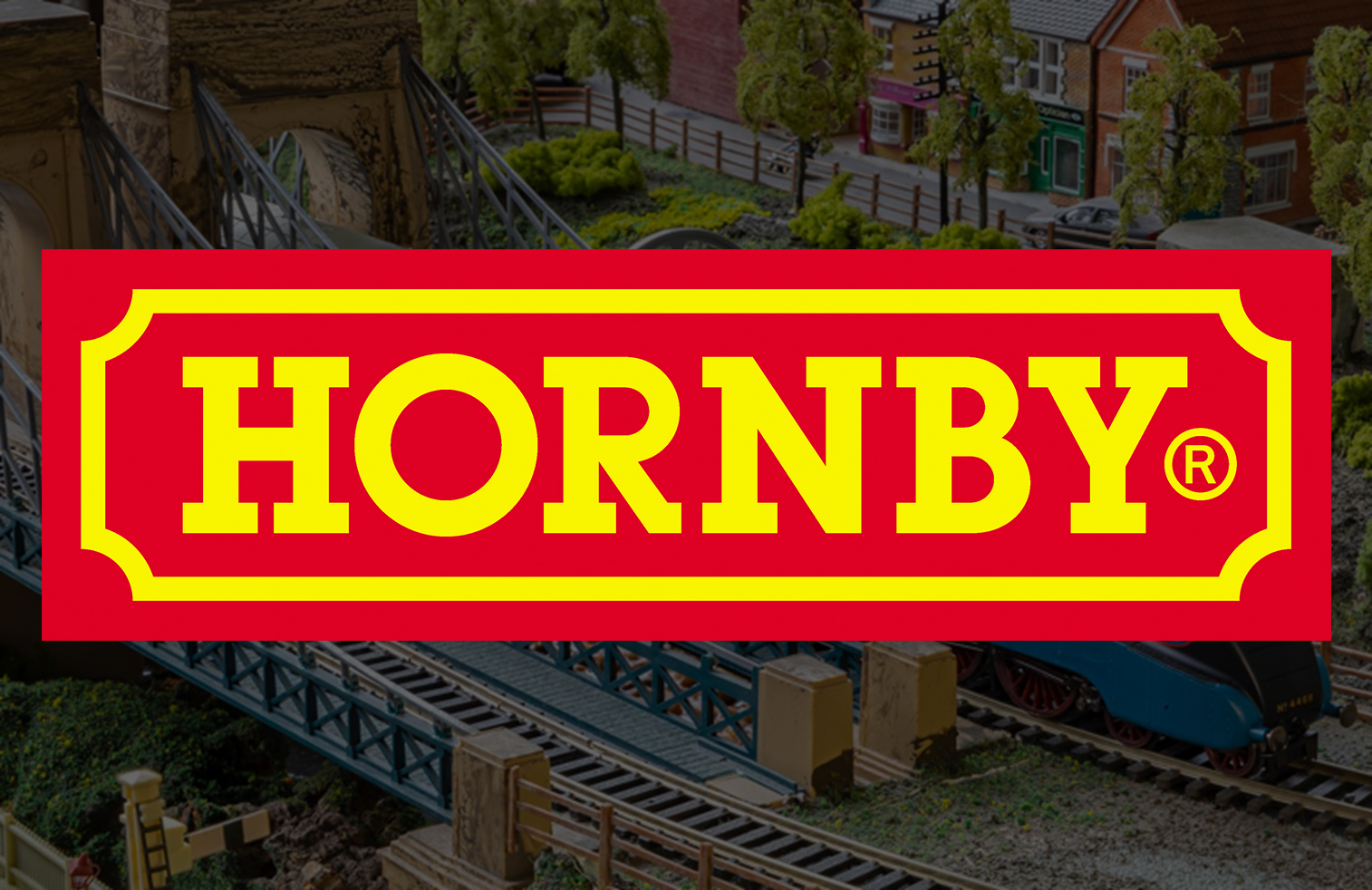